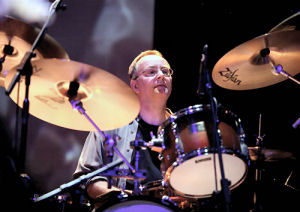 I first became aware of Dave Mattacks when, as a teenage schoolboy, I clasped my grubby mitts on a copy of Camel’s ‘The Single Factor’.

It was in the days when album-buying was a major passion for this erstwhile 13-year-old and it seemed Mattacks’ name would crop up quite a few times in the next few years. He was among an elite, including Steve Gadd, Simon Phillips – another who drummed on ‘The Single Factor ‘– and Jeff Porcaro, which seemed to be responsible for a large chunk of the drumming on my growing collection of 33 and a thirds.

It was Gadd and Mattacks, for example, who appeared on Paul McCartney’s Pipes Of Peace album in 1985, sharing drumming duties with Macca and Ringo Starr.

And things didn’t change when I moved over to CD – there he was on XTC’s ‘Nonsuch’, Beverley Craven’s solo debut and artists as diverse as Joan Armatrading, Brian Eno and Elkie Brooks.

There was also Fairport Convention, the band which offered Mattacks – or DM – his first tilt at fame in the late 1960s. You sense he dislikes being likened to a one-trick pony, but his name is inextricably linked with the folk-rockers.

Yet well before the call from Fairport Convention and getting recognition for his drumming skills from rock and pop royalty, Mattacks started on a different musical path altogether, setting out as a trainee piano tuner.

“Piano came first for me,” he says. “Then there was a brief hiatus before picking up the bongos and knitting needles when I was about 13. The kit proper came a few years later and I turned professional at 18.”

The first drumming “gig” was working in Drum City in Shaftesbury Avenue, London, but soon he found himself playing in a Mecca Big Band doing long residencies in London, Belfast and Glasgow. 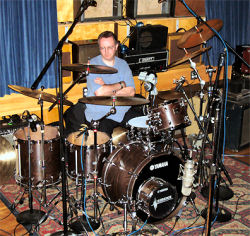 Dave in the studio

“I had kept in touch with the folks at Drum City where I used to work,” remembers Mattacks. “In late 1969 one of the guys who worked there told me that Fairport Convention were looking for a drummer. I auditioned – the only one I’ve ever done – and was fortunate enough to get it.”

So one audition and before you know it you’re playing with people as diverse as George Harrison, Cat Stevens, Elton John, Roger Daltrey, Chris De Burgh, Peter Green, Justin Hayward and Nick Drake among many others. Sounds easy?

Well, Mattacks’ innate musical talent shone through straight away. Fate also saw him join Fairport Convention at the right time. Fairport’s drummer, 19-year-old Martin Lamble died in a tragic motorway accident in May 1969, along with Richard Thompson’s then girlfriend, Jeannie Franklyn, as the band returned to London from a Birmingham gig. Enter Mattacks when Fairport Convention were just about to rewrite musical history and firmly cement folk-rock into the minds of the record-buying public.

It was a major triumph and Mattacks’ own star was rising as a result. On the back of Leige & Lief’s success he was getting calls offering session work.

“When I joined, the band was really working in a new musical area,” he remembers. “The marriage of a rock band line-up plus a fiddle playing traditional English folk music was new, so we all had to come up with a different angle on things. Although I wasn’t contributing material, all of us had to find a way to interpret these songs and dance tunes and get them to fit into a band format. I should add that although I understood the music in a literal way, I didn’t “get it” aesthetically until I’d been in the band for about a year. At that point, Fairport, it’s musicians and how they perceived, understood, appreciated and played music had a profound affect upon me and my musical taste.” 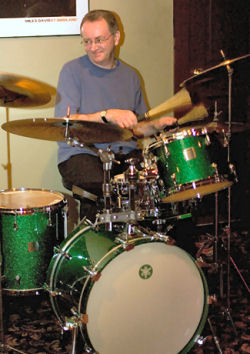 But life wasn’t all a box of chocolates despite being having one of the best gigs in live music and a growing list of sessions.

Mattacks said: “I left in 1974 frustrated with the lack of management and money; I was getting £50 a week at the time. But I was also doing a lot of very enjoyable session work. I started getting calls within a year of joining Fairport Convention & it went from there.”

Of course, life isn’t always that simple and Mattacks rejoined Fairport Convention in the mid-1980s, leaving finally in 1997.

In August ’07, the Liege & Lief line-up took to the stage at last year’s Cropredy Festival, organised by Fairport Convention since 1977, and played the album right through in honour of Fairport’s 40th anniversary.

“That was really enjoyable,” said Mattacks. “Though because expectations were high and that configuration of players hadn’t played that material for about 37 years, for the first time in a long time I was rather nervous. The band hold that three-day outdoor Festival every year, but this one was always going to be rather different, especially for me as it had been 10 years since I left the band.”

Flying in five days earlier for rehearsals, preceded by a frantic few days writing out all the drum parts, Mattacks said: “On that Friday Aug’ 10th night, a combination of memory, adrenalin and ensemble professionalism kicked in and the performance was well received by some 25,000-plus people. The Saturday night was predominantly given over to Fairport’s current line-up, but I got to do some occasional double-drumming with one of my heroes, current Fairport Convention drummer Gerry Conway.” 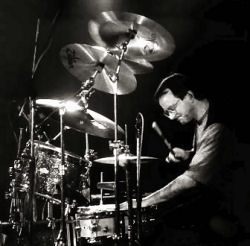 “Then I added drums pretty much one at a time. I recall a hi-hat, then a Premier bass drum and an Olympic floor tom were the first add-ons. The first drum that sounded any good was when I upgraded to a Ludwig 400 snare drum – good grief, what a difference!

“I must give kudos to Johnnie Richardson. John, a wonderful player and truly a top chap, was my boss at Drum City when I worked there in the mid-1960s and I learned so much about drums from him. I played a four tom set-up for a long while. These days it’s typically three toms, which was my first pro set-up – one rack, two floors.

“I think I’m improving at getting more sounds out of less drums and cymbals, though I always take a lot of gear to recording sessions. Like most of my peers, I do have a thing for snare drums and cymbals and have an uncommon amount of both. The only other thing slightly different is that for a long time now, my cymbal set up always includes one really thin china.”

Mattacks is recognised by many of his peers as “one of the good guys”, whose good-humoured, simple and groove-laden beats mark him as one of the best. He says he tries to maintain a balance between live and studio work, but says that playing-wise, his ‘editing’ has got better since those early days of laying down tracks with Fairport Convention.

A self-confessed “foodie” with more than a passing interest in films, Mattacks is still keeping busy, drumming with his band Supergenius, as well as film work, too.

He stresses there is no “secret” to his success, but did make the permanent move from Britain to the US of A in 2000. Now this Middlesex-born sticksman proudly proclaims his new allegiance to Marblehead, Massachussetts. 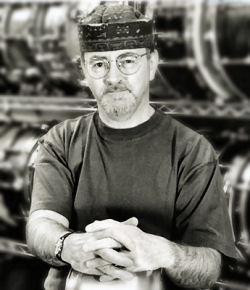 “I was working much more in the US than in Britain. Also, a lot of popular UK music seemed to be predominantly machine-driven. I’m not saying that that type of music doesn’t exist in the US, but there is certainly more room here for other types.

“After living here for a while it was either “you’re the guy that played with XTC/Tull/McCartney” or “what did you say your name was?” I found either reaction to me preferable to “oh yes, Dave the folk rock drummer”. And finally, in the UK, what’s with the million tribute bands?”

Mattacks has played on best-selling albums, but he hasn’t shirked “lesser” or unusual gigs. He’s played with Gerry Rafferty’s brother, Jim, and took on drumming and keyboard duties with Jethro Tull for their stripped back semi-acoustic tour in 1992. This saw him credited with “snare drum, bass drum, hi-hat cymbal, glockenspiel, percussion, keyboard” on the resulting live album, A Little Light Music.

“There are a lot of favourite moments,” recounts Mattacks. “The various studio sessions with Joan Armatrading, McCartney, Harrison, Jimmy Page, XTC were all special. Likewise, getting to play concerts/gigs with Septpiece, Andy Fairweather-Low, Chris Rea, Liane Carroll, Jethro Tull and Richard Thompson (another Fairport Convention alumni) in particular, anytime from 1967 to date, was wonderful.

“The last few years I’ve had a great time doing concerts with Feast Of Fiddles, Mary Chapin Carpenter and Rosanne Cash. The commonality to all artists is to have more than a passing acquaintance with the genre you’re working in. After that, play some good time and don’t step on the singer.”

Being busy as a session player is proof positive you’ve got what it takes, but it does have its downsides. Having to turn down work is always a problem, and Mattacks admits: “There were quite a few times when my Fairport Convention commitments prevented me from taking other work, including a Jack Bruce tour, a Pretenders session, & other McCartney work. I have occasionally wondered what might have happened, and should I have moved to the US earlier. You can’t beat yourself up thinking about the “what if” factor too much though.”