Snare Drum Of The Month – Paiste Spirit of 2002 Snare Drum 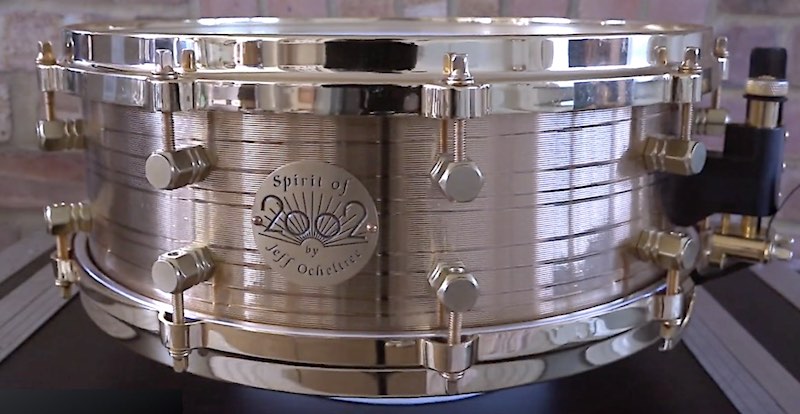 For the longest time – and by that I mean pretty much since I first saw one around 1999 – I wanted one of these drums. In fact, up until this year it was one of my bucket list drums, although I never realistically thought I’d own one. However, through a bit of good luck and circumstance that recently changed.

I’m a big Paiste fan. Actually, I’m just a big cymbal fan really and while I own other cymbals too, Paiste were the first cymbals I ever bought, so for me this is almost an extension of that.

The shell is 3/8” (5mm) thick and made from recycled Paiste 2002 cymbals (which are a B8 alloy), hence the name. There was also a subsequent S-Bronze line made from Signature bronze as well.

The drums were designed by Jeff Ochletree, who also created several other models of snare drums as well including the aforementioned S-Bronze snares.

The drum features a cast shell, Nickelworks strainer, die cast hoops, eight single solid brass lugs per head, deep snare beds, Puresound wires and gold plated hardware. It shipped to me with Remo heads on it but I replaced them with Evans as those were what the drums originally shipped with. Originally, you also got a certificate detailing the drum, although I didn’t get one for this drum since it’s probably well lost by now.

I’m yet to find out definitive production numbers for these drums, but they were available in 13×5.5”, 14×5”, 14×6.5” and 14×8” sizes, Danny Carey of Tool being a famous user of the largest size. He’s also the owner of one of the three (and as far as I’m aware, the biggest) kits made out of the same material. A rather fun fact is that the kick drums from the aforementioned kits apparently each weigh 100lbs…

This particular drum weighs in at a mere 20lbs which makes it a little impractical for regular gigging, or indeed carrying around full stop, although I have gigged it.

To play, the drum is bright, ringy, crispy and just a joy. It is one of those drums that when I gigged it, I just wanted to keep hitting it. It’s also quite loud, but that probably isn’t a surprise.

It took some twenty years after I first saw one, but I was able to purchase this drum in 2019 from Steve Maxwell’s New York store. While it didn’t come directly from him, I was told the original owner was Sammy Merendino (a long time drummer for Cyndi Lauper, amongst others).

It wasn’t cheap – it also wasn’t cheap in 1999 either, as the list price then was over $2,100 – in a practical sense I probably shouldn’t have bought it, but this particular drum is as much an investment as it is just a cool snare and so I don’t care. Dreams do sometimes come true it seems.