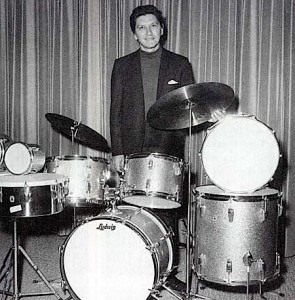 When Hal Blaine was ripping it up on the West Coast, three thousand miles from New York as the Boeing 707 flies, it was physically and geographically difficult for him to make recordings on the East Coast. Plus of course, he’d lose a small fortune in missed session fees while he was getting there and back. However all was not lost – there was an equivalent drummer over on the Atlantic seaboard who was able and willing to do all the sessions. His name was Gary Chester.

He was born Cesario Gurciullo on October 27, 1924 in Siracusa, on the island of Sicily which is the largest Mediterranean island and situated off the foot of Italy. After moving to the USA, he grew up with his two sisters and a brother in Harlem where his father was a barber. Gary would bang away on tins and boxes in the back of the salon; eventually he graduated to real drums and left school early to go on the road with a touring band.

Gary Chester was very, very busy making records during the fifties, sixties, and seventies. He started with playing ‘doo wop’ and (original) R&B, then moved on through all the popular genres including ‘rock‘n’roll’, ‘folk-rock’, ‘pop’, ‘rockabilly’ and eventually even ’rock’. I don’t believe we’ve ever discussed this distinction in ‘Groovers & Shakers’ but for the record ‘rock’ aka ‘heavy’ music as a genre came along towards the end of the sixties. Gary found himself playing sessions for 10 hours a day putting down commercials and hardly listening to rock ‘n’ roll music. 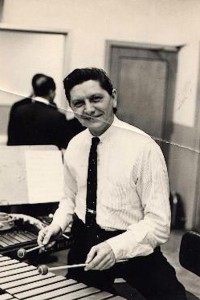 most of his generation, he was a proper jazz drummer who played with Bill Evans. He also played tuned percussion and he started out playing jazz with various different artists and was the drummer on a couple of East Coast TV shows. But he knew which side his bread was buttered.

Gary played drums on “Twist and Shout” (the original Isley Brothers version, NOT the Beatles!), confessing at the time he didn’t really have any idea what rock’n’roll was all about! But reverting to his roots, not too long after he this played on a track called “Artificial Flowers” with Bobby Darin which really showed off his jazz chops.

He became the first white drummer to play with black artists in New York and eventually became Atlantic Records’ house drummer, recording with the likes of Louis Armstrong and Jackie Wilson.

But that Isley Brother’s hit certainly wasn’t his first record by any means. His first was around 1960 when he was called in to replace a very experienced studio drummer on “Saved” by Lavern Baker. This song was written by Leiber and Stoller, a couple of New York songwriters who worked out of the Brill building on Broadway and 49th Street, alongside the likes of Carol King and Neil Sedaka. Amongst many other massive hits these guys wrote “Hound Dog” and “Kansas City”. 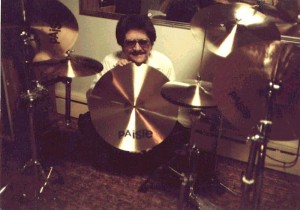 Well-founded rumour has it that Gary played on thousands of tracks (check out the discography in the front of his ‘New Breed’ book), hundreds of which were hit records including among a huge list of others: ”Spanish Harlem” by Ben E. King, “My Prayer” by the Platters, “Save The Last Dance For Me”, “On Broadway”, “Up On The Roof” and “When My Little Girl Is Smiling” by The Drifters, “Wild One” by Bobby Rydell, the afore mentioned “Twist And Shout” by The Isley Brothers, “My Boyfriend’s Back” by The Angels, “Walk On By”, “I Say A Little Prayer”, “I’ll Never Fall In Love Again” and “Do You Know The Way To San Jose?” (in fact everything great by Dionne Warwick), Van Morrison’s “Brown Eyed Girl”, “What Kind Of Fool Am I?” by Anthony Newley, “The Boxer” by Simon and Garfunkel, and the song which always makes drummers smile at weddings – “Will You Love Me Tomorrow?” by the Shirelles!

But there’s a great deal more, so I’ll do some cherry picking if you’re ready – “Chains” by The Cookies, ”Crying In The Rain” by The Everlys, “Tell Him” by the Exciters, “What The World Needs Now Is Love” by Jackie De Shannon, “In The Still Of The Night” by The 5 Satins, “Just A Dream” by Jimmy Clanton, “It’s My Party” by Lesley Gore, “Do You Believe In Magic?” by The Lovin Spoonful. Diverse or what?

He even found time to play for Country Joe and The Fish, Connie Francis, The Monkees, The Archies, Jose Feliciano, Dusty Springfield, Frankie Lymon, Aretha Franklin, Paul Anka, Jim Croce, Little Eva, Sammy Davis jnr and Frank Sinatra. He actually had his own band called ‘Gary Chester and the Beatle Beat’, decades before anybody thought you could actually get paid rather well for sounding exactly like somebody else! 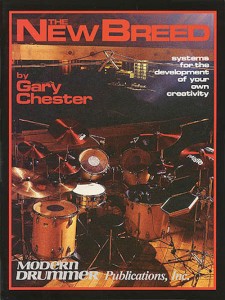 He played on 14,000 recording dates and, if that wasn’t enough, or maybe because of it; eventually took to teaching and a partial list of pupils includes Max Weinberg, Tico Torres, Danny Gottlieb, Kenny Aronoff and Dave Weckl. He wrote a tutor book called ‘New Breed’ which was published by Modern Drummer and described by no less than Louie Bellson as “A classic!” and “an original that uses an approach found in no other book. He wrote the book on drumming!”

It used a concept which as far as I can ascertain had never been publicised before defined as ‘Five-way Independence’. This is described as (and I quote) ‘internalised patterns employing a drum melody in an attempt to expand drummers’ coordination and groove ability.’ It used ostinatos, which is as far as drums are concerned, short constantly repeated rhythmic patterns. He created single line ‘melodies’ which should be played with one limb (or sung) while the other limbs were playing the ostinatos. The rationale behind this, once mastered, allowed the drummer to sound like a small percussion section. This enabled the drummer to make a positive contribution to the song while playing, to compliment it rather than showing off! He also advocated learning to do away with laterality (natural left or right handedness) to make fills smoother – the open-handed style as admirably demonstrated by Billy Cobham, Simon Phillips and others. Eventually a refined version came out called New Breed 2. Gary Chester felt that the drummer would play better if he sang the song (or at least the quarter notes within it), hence the ‘five way’ coordination.

As far as drum sets were concerned, there are plenty of photos of him playing a champagne sparkle Ludwig with a 20” bass drum, 13, 14 and 16” toms and a Ludwig 400 snare drum which he always played with his left stick reversed, presumably to get that fatter back-beat sound. There’s also a photo of him with a natural wood finish set behind him which looks like a Gretsch. There is a picture of him amongst a pile of Paiste cymbals. Even though the cover of New Breed show Simmons electronic pads, he claims he never used them – they were merely placed on the kit in an attempt to be more current for the photo shoot! 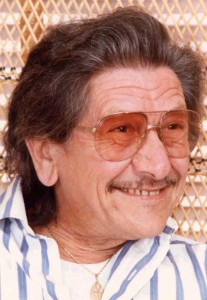 He was speaking to Scott K Fish for Modern Drummer in 1983 and came up with some words of wisdom about the actual business of music:

“We were always professional enough to never be late; to always be on the job and do the job the best we could. That’s the thing in this business. It’s not enough to play well. You’ve got to go in giving the man more than he’s paying you for.”

To add to that it’s a well-known fact he always played for the song and to quote him:

“Playing good is not good enough, you’ve got to be innovative”.