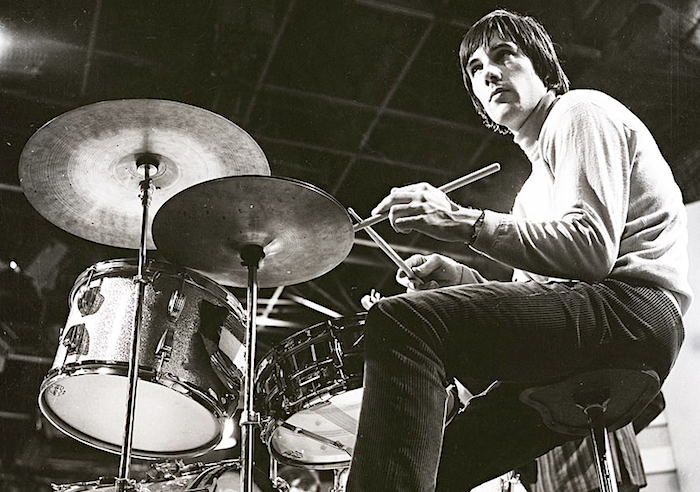 This month’s subject shouldn’t be too difficult to write-up since I’ve known him, and the rest of the guys he played in the band with, rather well for coming up to sixty years. Mick was in the Kinks, and as it happens, so was I. I won’t go into why Mick left because reams have been written about just that vexed subject – some of which are largely correct.

Michael Charles Avory came into the world in East Molesey, Surrey, England. He reached his teens just as the do-it-yourself skiffle boom was sweeping the UK. This provided his entry into music as a player. He lists Lonnie Donegan as an influence and of course he cites Elvis Presley in that role too. By his own admission he knew he wanted to be a drummer without actually knowing what he was doing.

His interest began when he was a member of the Sea Scouts at age 13. He went with a friend to a Scout meeting where some of the boys had formed a skiffle group. The guy playing drums, or at least providing rhythm (noisy, aggressive washboard as it was at the time), had abandoned that role and Mick was invited to take it on. It was from that beginning that he learned the rudiments of drumming, and became very serious about it.

I’m guessing we bumped into one another for the first time when the Kinks were just beginning to make significant waves, not too long after “You Really Got Me” came out, in 1964. That, as any dyed-in-the-wool fan will tell you, wasn’t actually the Kinks first record, as “Long Tall Sally” was.

We would see one another at TV shows like ‘Ready Steady Go’, or the odd award show and remained firm friends. Every now and then I’d get a call to dep for him in the ‘Organisers’, ‘Kast-Offs’, ‘Shut Up Frank’, ‘Class Of 64′ and others, whose names I can’t remember. Up until 2020’s pandemic problems the Kast Offs were happily carrying the Kinks’ torch onwards and upwards. Ray himself said nobody was ever fired from the Kinks, although The Kast Offs happen to comprise of five people who are no longer playing with Ray and Dave any more! 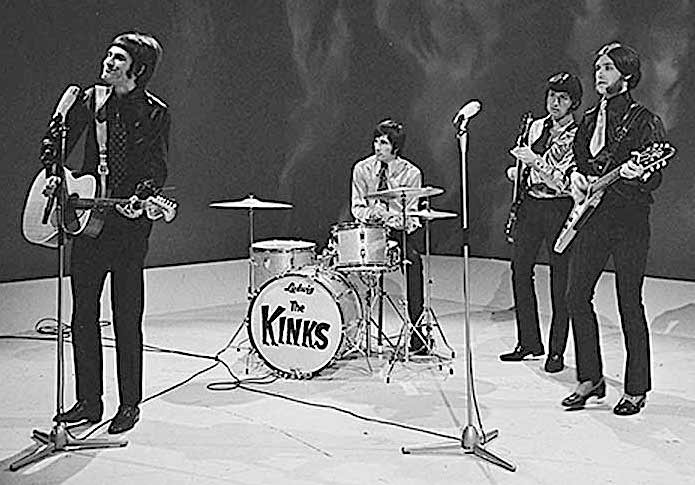 Mick Avory was born on 16th February 1944, which makes him a baby-boomer just like the rest of the group members who made it big in America during the British Invasion. This was during the first half of the sixties. His first non-Kinks record though was something of a hit with a band called Bobby Angelo and The Tuxedos and was called “Babysitting”.This was surprisingly earlier than I thought, back in 1961.

He joined the Kinks shortly after their formation in 1964 and remained with them, through thick and thin, until 1984. He left after what has become known as ‘creative friction’ with guitarist Dave Davies. Mick is the longest-serving member of the band, apart from the Davies brothers.

Before he joined the Kinks though, they had been known as The Ravens. Having left the Tuxedos he was invited, in 1962, to rehearse a couple of times at a pub called the Bricklayers Arms in Soho. This was with a group of musicians who were later to become the Rolling Stones! Rumour has it he also went on to play at their first show at The Marquee Club in July 1962 although Mick Avory himself says: “I think Tony Chapman(who was eventually in The Herd) did the gig at the Marquee. I didn’t. I just rehearsed twice in the Bricklayers Arms.”

So Mick decided not to throw his lot in with the Stones, confiding in me once “because the Kinks had more gigs”. Looking back at it, you couldn’t make that up!

Avory joined the Kinks in January 1964, after their previous drummer Micky Willet left the band. Mick A. was hired to replace him after the group’s management saw an advert he’d placed in what was then the absolute musician’s bible: the Melody Maker offering his services as a hired gun. His advert worked and he was hired for the group although he wasn’t allowed to play on early Kinks recordings. American producer Shel Talmywanted to use more seasoned session players and wanted to hire the likes of Clem Cattini, Bobby Grahamand yours truly for his studio work. Up until 1965, Mick Avory often provided supporting percussion and he played drums on certain tracks on the first albums – my involvement is better detailed in ‘Banging On!’. The first single A-side Avory played on was evidently “Ev’rybody’s Gonna Be Happy“. After that he played on all Kinks recordings from the 1966 album Face to Face until his departure in 1984 just before the making of the album” Word of Mouth”. 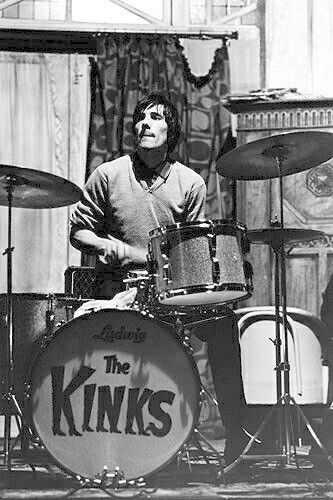 Mickey Avory was always considered the most easy-going member of the Kinks lineup and was Ray Davies‘s best friend. However, his turbulent working relationship with guitarist Dave Davies resulted in onstage fights which it seems many people in the audiences came to witness. There weren’t as many as some audiences wanted! The most notorious (and mostly mis-reported) incident took place in 1965 at the Capitol Theatre, Cardiff in 1965. Avory hit Dave with his bass drum pedal (not the cymbal stand or the hi-hat, which, according to later interviews with Avory “would have decapitated him”). This was in reprisal for Dave kicking over his drum kit as revenge for a drunken fight the previous night in a Taunton hotel, apparently won by Mick. He then fled into hiding for days to avoid arrest for GBH (grievous bodily harm). On other less dangerous occasions in temper he would throw his drumsticks at Dave. According to Ray, their problems began during the time Mick and Dave shared a flat in London for a short period in early 1965.

Ultimately, the relationship between Avory and the younger Davies brother deteriorated to the point where Mick left the band. He was replaced by a certain drummer who is writing this piece, and this came after my time with The Roulettes, Unit 4 + 2 and Argent.

In 1996 Mick started playing with The Kast Off Kinks, along with Nobby Dalton, Dave Clarke (with an E) John Gosling and Jim Rodford . He has performed with them ever since although Jim Rodford and Ian Gibbons’ sad deaths, and of course the Coronavirus, have made things impossible.

In the 1990s, he was also part of ‘Shut Up Frank’ with Clarke, Noel Redding from the Hendrix Experience and Dave Rowberry of The Animals. They toured extensively and recorded several albums.

By April 2004 at the request of The Animals, who were about to make their 40th anniversary tour, Chip Hawkes (at one time with The Tremeloes) was asked to form a band to tour alongside them. This he did and brought together a proper beat era supergroup. The band featured former original members of several British 1960s groups, including Avory, Eric Haydock from The Hollies and Hawkes, who have now combined to perform as The Class of 64 (referring of course to the actual year the British Invasion took America by storm), also featured guitarists ‘Telecaster Ted’ Tomlin and Graham Pollock. The band have been around the world, and have evidently recorded an album of their former bands’ hits. 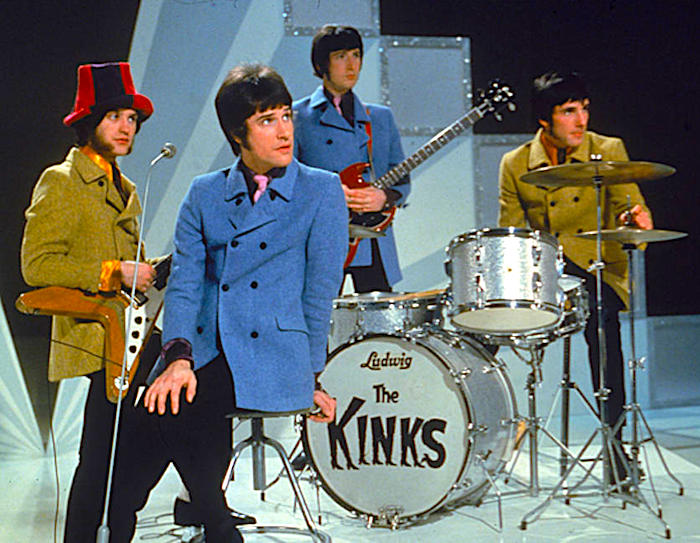 In 2007, Avory left The Class of 64 and formed another sixties-themed band with Haydock, Pollock and Tomlin, called ‘The Legends of the Sixties’. Avory also plays in The ’60s All Stars’ band, featuring members of British 1960s groups: John Dee (The Foundations), Alan Lovell (The Swinging Blue Jeans) and Derek Mandell (The George Harrison Band). Avory was asked to become involved with The Jam following Rick Buckler‘s departure, and toured with them in December 2009.

Mick Avory is generally recognised as being one of the most familiar names among British Invasion drummers. His tenure as a member of The Kinks lasted from 1964 through to 1984, so he got to play before the screaming crowds of the British beat boom, in stadiums at home and abroad. Also of course he played on the more sophisticated records and extended concept works that made up the group’s output of the late ’60s and the 1970s. The canon of Kinks songs is immense and Mick singles out “Arthur” and “Victoria” as his favourites.

I hope he won’t mind me saying he was never as visible a personality as Ringo Starr – who wisely added acting to his repertoire.

Mick’s drumming heroes are Art Blakey, Max Roach, Shelly Manne and Joe Morello. I don’t know if he had actual drum lessons, but I do know he had conga lessons from a guy called Chris Karan who was Dudley Moore’s percussionist.

As far as drums and cymbals were concerned Mick has always been a really good customer for London’s drum stores. So far he’s had lots of kits from Ludwig, Sonor, Gretsch, Premier and Yamaha. As far as cymbals are concerned he plays Paiste – a mix of Formula 602 and 2002,

Mick’s career has spanned at least 50 years and it seems to everybody who knows him that he’s made the most of it. I cant wait till the danger is over and Mick, and the rest of us can start making music again.

I read somewhere that Mick’s ambition is to play at Ronnie Scott’s. I’d really like to see him do it.