Ladbrokes Launches Groundbreaking European Championship 2020 Campaign, By Bringing Together The Heartbeat Of The Nation With 100’S Of Drummers 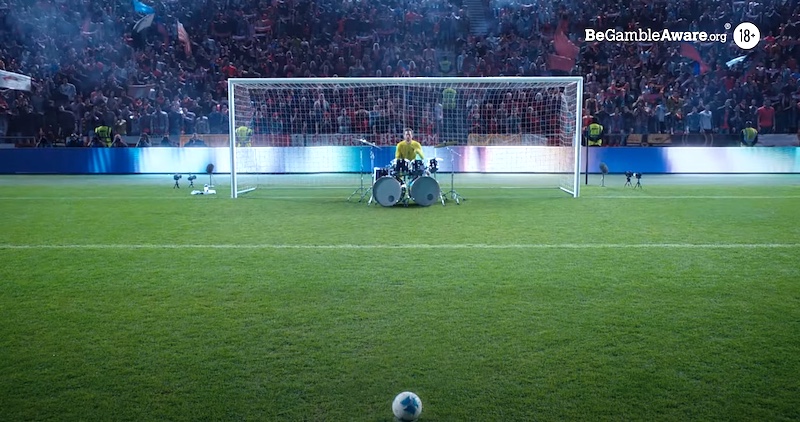 Ladbrokes has launched a new ground-breaking campaign that celebrates this year’s much anticipated European Championship 2020 tournament and captures the joy of live sport and entertainment through drumming on a massive scale.

The campaign leads with a 60 second TV film celebrating the excitement football brings to fans and casual viewers alike, alongside activations across the nation designed to raise awareness for how the live entertainment sector has suffered disproportionately over the last year.

The TV film is the first work for Ladbrokes by creative agency Neverland, appointed as the brand’s lead creative agency in March. It will launch in a media campaign planned and executed by the7stars on Saturday 29th May during the Champions League final, across both BT Sport and Twitter. Prior to the big launch, there will also be a series of teasers running across Sky Sports, heightening the nations anticipation for this inspiring new creative.

The film, directed by Sam Brown of Rogue Films, uses hundreds of drummers to evoke the anticipation and tension that football fans feel during a crucial penalty. As the player backs nervously away from the ball viewers can hear his heart beating in a metronomic rhythm. The camera reveals that it isn’t his heartbeat, but actually a crowd of drummers surrounding the player. The viewer then sees that drummers are filling the entire stadium, and even spilling out into the commentary box. The film then cuts to drummers in a variety of situations where fans would typically watch the game, including gathered together in a family’s living room, packed into a pub, clustered around a bus stop and across the rooftops and streets of a city. It then builds to a crescendo with unbearable tension as the player runs towards the penalty spot and, as he makes contact with the ball, the drumming track kicks back in. 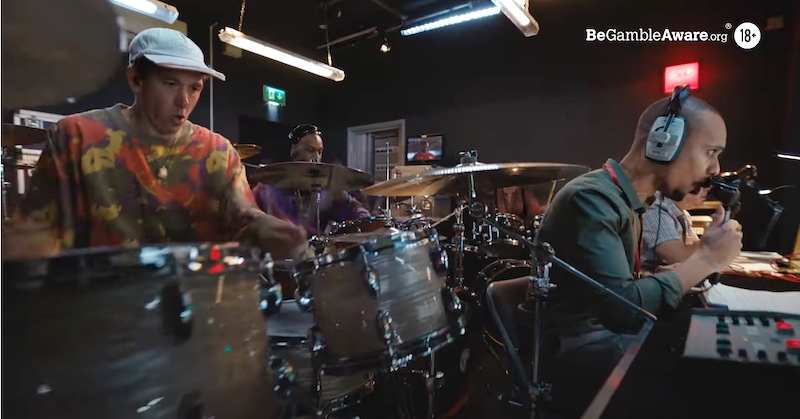 Filmed in May this year, the production included employing 190 skilled and experienced drummers. The shoot also included 200 extras and employed the use of drone filming, motion capture, body scanning, and huge team of visual effects and CGI artists working to create the epic scenes. Del Amitri drummer, Ash Soan, and Josh Campbell were responsible for arranging and composing the drummers in the shoot. His experience includes playing at the London Olympics 2012 opening ceremony and recording 29 No. 1 albums. The film was coordinated by Mike Dolbear who coordinated 1,000 drummers for the 2012 opening ceremony for the London Olympics.

To show its support for the music industry and the invisible army behind the scenes, Ladbrokes has partnered with #WeMakeEvents – an industry collective raising awareness of the challenges currently being faced by over 700,000 highly-skilled professionals. A recent #WeMakeEvents survey found that one third of employees have already left the sector, as they have been forced to opt for stability over passion. The collective is actively campaigning to get those remaining events employees the immediate, tailored support they need to survive the Covid-19 crisis. Ladbrokes and #WeMakeEvents have teamed up to light up iconic music venues across the country, in red to signal the industry’s emergency. Venues include the Cavern Club in Liverpool, the Albert Hall in Swansea, Camden’s Roundhouse, Barrowlands in Glasgow and Dreamland in Margate. Ladbrokes has pledged a significant donation to support their campaign to help areas of live entertainment outside of sports return to their former glory.

The Ladbrokes European Championship 2020 TV film will not only go on to appear in the key European Championship matches, as it is supported by multiple cross-channel activations, including online video and social, radio, print and OOH across 2,500+ sites across the UK. The campaign includes dynamic reactive advertising which means that Ladbrokes can celebrate, commiserate, and interact with fans in real time across both its social channels and publicly on 1000’s of digital outdoor sites across the nation. 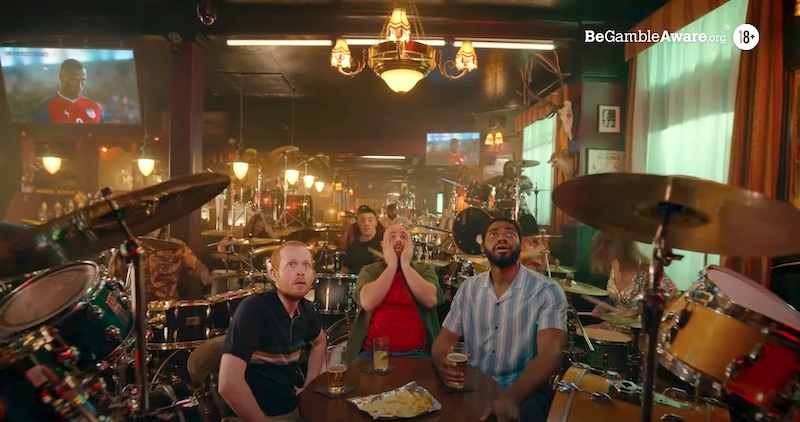 Ladbrokes and Coral’s Dominic Grounsell, Managing Director-UK Sports Brands says: “For many, this year’s European Championships will be the first live entertainment experience they enjoy together with friends, family and other fans. This groundbreaking campaign brilliantly captures the anticipation that viewers will feel during the tournament. We cast hundreds of skilled and experienced drummers to depict the tension that fans will feel during key moments in a match and we’re very excited about how this campaign celebrates the unparalleled joy, excitement and anticipation that only live entertainment can bring.

“That’s why Ladbrokes has committed its support to the live events industry. We’re so excited to bring a performance of The Subway’s Rock &Roll Queen, while lighting up of the UK’s iconic live performance venues in red will remind the public of the millions of skilled industry professionals behind the scenes that make live entertainment happen.”

Peter Heath, Steering #WeMakeEvents committee member and Managing Director of Professional Lighting and Sound Association (PLASA), comments: “As the sector continues to reel from the devastating impact of COVID-19, we welcome Ladbrokes’s valuable donation to help the highly-skilled professionals, who have been out of work for over a year. The live events supply chain has been without government support and proper guidance, so we are delighted that we will see a few specialists return to doing what they love ahead of the European Championships. 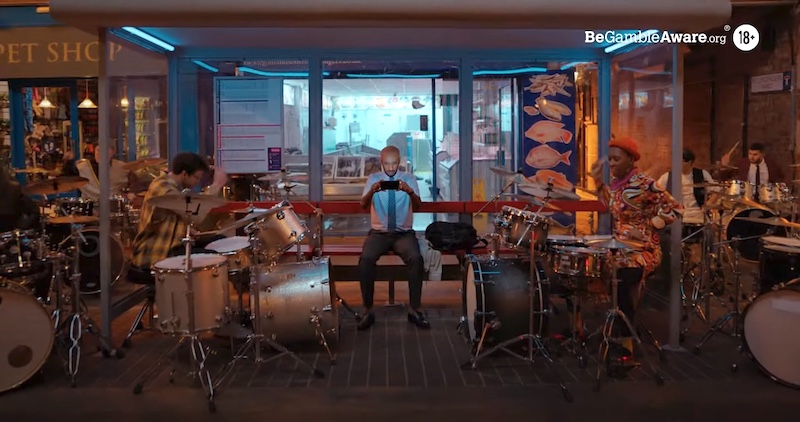 “As a voluntary cross-industry collective, we rely on support from the public and businesses to raise awareness of the challenges we face and charitable donations until we are allowed to open up at a full, safe capacity – which in this sector may not happen, for some, until 2022. With this wonderful financial donation from Ladbrokes, we hope this gig provides hope and optimism to the thousands of people that are excited for us to return.”

Jon Forsyth, Founding Partner at Neverland: “We loved every single minute working with Ladbrokes to make this campaign. It’s a kick-ass, blow the roof off, jump on the sofa, bring on the summer extravaganza! Enjoy!!”

Lydia Mulkeen, Client Partners media agency the7stars says, “We’re thrilled to have developed a dynamic comms plan for this remarkable campaign that captures the excitement of the Euros.

Importantly, we also have the ability to react publicly to key moments in the tournament across a category-leading dynamic outdoor campaign, ensuring Ladbrokes is seen as just as big a fan of football as their audience.”