If you didn’t know, Aquarian makes more than just drumheads.

The items here are, in many ways, quite self-explanatory. That said, they offer alternatives – or possibly solutions – to issues which every drummer will come across at some point.

Head muffling is something we all need to do at some point, whether it be live or in the studio where odd frequencies or ringing are more likely to be noticed under a microphone.

Aquarian’s t-Tabs are basically sticky strips which can be placed anywhere on a drumhead. The more you put on the head, the more deadened the sound is. That’s probably obvious. On a moderately ringy brass drum, one Tab did make a noticeable difference to the overall ring. Two got that ring right down.

The plus side of a muffling device that lays flat and solidly sticks down (i.e. unlike something gel based) is that it can be used on both on top of the kit – for toms and snare – and also bass drum heads.

Admittedly, I didn’t try the t-Tabs on my kick drum since it would have been rather pointless given the way it’s already set up.

But, if I were in a jazz combo or similar where my kick drum was unmuffled and I didn’t want to put anything inside the drum, I would definitely consider putting these on the inside of the reso head.

In addition, the fact they’re also white means that for many of us who use white heads, they’ll look much neater than something like gaffer tape. 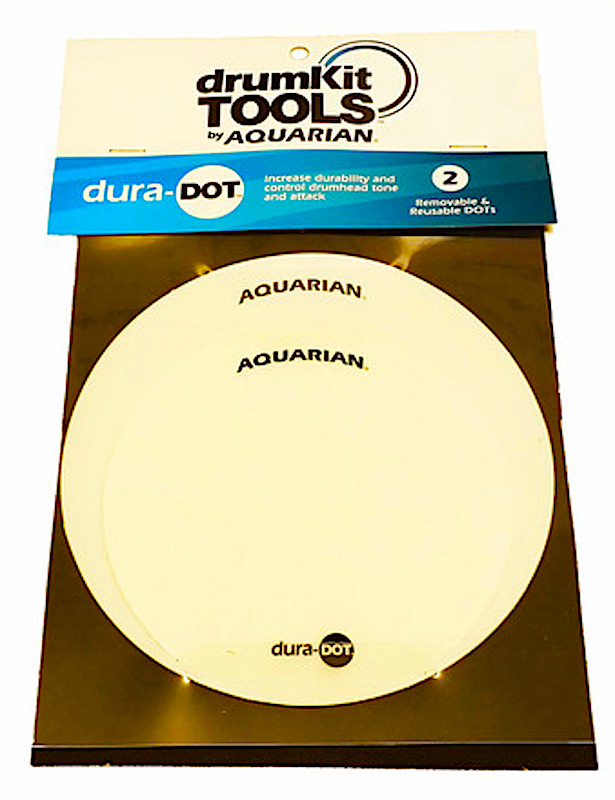 They’re plastic dots, that’s pretty much it. Not really a surprise there.

While you might think upon first look these are straight kick pads or head dots – and that would be two potential uses of them – Aquarian’s suggestion is that you use them more as muffling devices, either loosely or stuck down.

Options I can see you have for using these dots –

As you can see, lots of possibilities in both sound changing (or is that manipulating?) and muffling. I like that they come in two decent-sized options too. 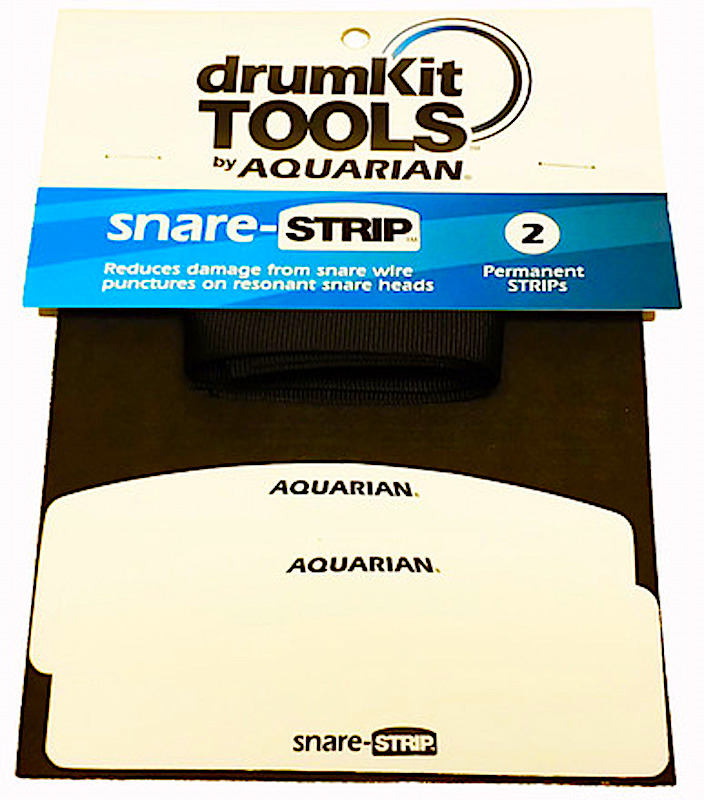 Snare Strips are intended to provide a protective base on the bottom snare head against any possible damage from the wires.

I have to be honest, in 30 years of owning and playing drums, I may only once have been in the position of the wires rubbing and causing damage against the head. Then again, I don’t hit all that hard, I rarely use the same snare drum for long periods and I’ve never been on tour either. So…

There may indeed be a need for this type of product and I’m not going to deny that. I’m going to bow to Aquarian’s bigger picture knowledge on that one.

In terms of application, you place the [permanent] strips on either side of the bottom head where the ends of the wires touch and that’s it. In the pack you also get some fabric strips (instead of wire or chord) to attach the wires.

Aside from the main purpose of the strips, Aquarian also says they can be used to dry out the sound of the head (and that’s cool), or fix small punctures in the film and therefore extend the life of the head.

This second aspect I can definitely get on board with; who hasn’t popped a snare head at some point or poked a hole by accident? If you haven’t got a spare snare side head with you on a gig – and really, who does carry one on a pub gig? – it would be much quicker to loosen off the head, spin it round, slap on one of these and then get back to playing.

If you don’t have the option of carrying a second snare to the gig with you, some of these just in case are a much cheaper option.

Do these products work?

Well, yes they do. The fact that most of them are also potentially reusable as well gives them more appeal too. Add to that they’ll easily fit in a snare case.

The Drum Kit Tools aren’t revolutionary but they work as intended, are pretty cheap, easily storable and, as mentioned, potentially reusable as well.