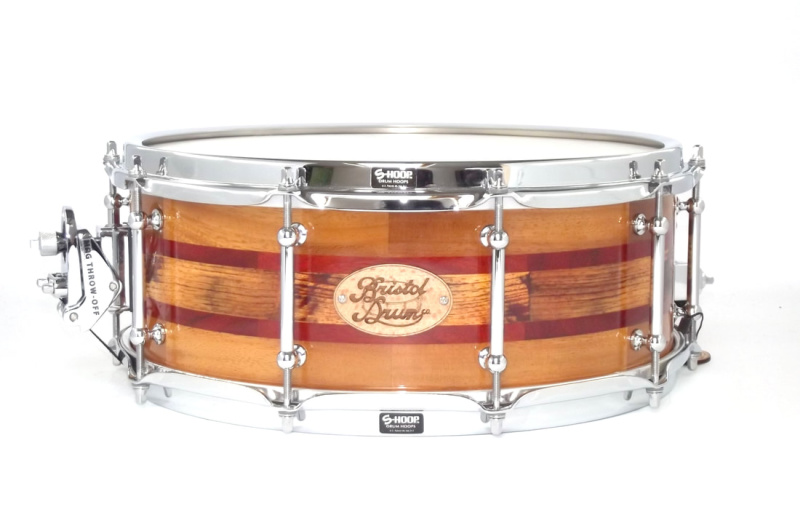 Those outside of the UK may not have heard of the Bristol Drum Company, so to give you a little background, the city of Bristol is in the south west of England about 120 miles from London. James May and Ben Collins (The Stig) from Top Gear were born there and they tend to talk with a bit of an accent, a bit like pirates do in old films.

The Bristol Drum Co is a small boutique drum builder based in the area.

The company produces its own range of wooden segmented snare drums that are all individually made in a workshop in Bristol and that involve many hours of careful craftmanship to produce. The company produces each snare drum with its own unique serial number, with no two drums ever being exactly the same.

The drums are made using segmented construction and come in a range of 10″, 12″, 13″ and 14″ diameters, and thicknesses up to 1/2”, and a range of indigenous and exotic hardwoods are available.

Now, this 14×7 drum is a stave shelled model made from Iroko and Padauk – the Iroko being the main wood and the Paudauk being used to make the stripes. Personally, I’d never heard of Iroko before coming across this drum, so that a cool new thing for me there.

It also came fitted with Evans heads – a power centre batter and a 300 snare side.

When I first tried the drum, I felt the supplied batter head choked the drum a little too much. It didn’t sound bad at all, but just seemed to make the drum hold back. Wanting to see what the drum would do with another batter head on, I put an Evans coated G1 on. Unsurprisingly, this did open the sound of the drum right up and, to me anyway, made the drum sound much better.

I found the drum worked convincingly at all basic ranges, although ‘low’ (as in the video) wasn’t really all that low, but it still worked. Personally, I thought it worked best at the mid-range point. There, I could feel the depth of the shell, with a nice fat convincing sound being produced.

In terms of playing, under the stick the drum felt very solid, it’s one of those drums that feels like it won’t ever let you down.

Overall though, I think this is a really nice drum. It looks good and has a classy vibe to it.

To me, it wouldn’t look out of place in a display cabinet, but is still something you can use as a daily driver too. While I think for me it rather lends itself more to being used in louder applications, it does have plenty of sensitivity too. Although it’s not cheap, it’s also not prohibitively expensive either (around the £550 mark) and in terms of cost against value, I think it’s reasonably priced for what you get.