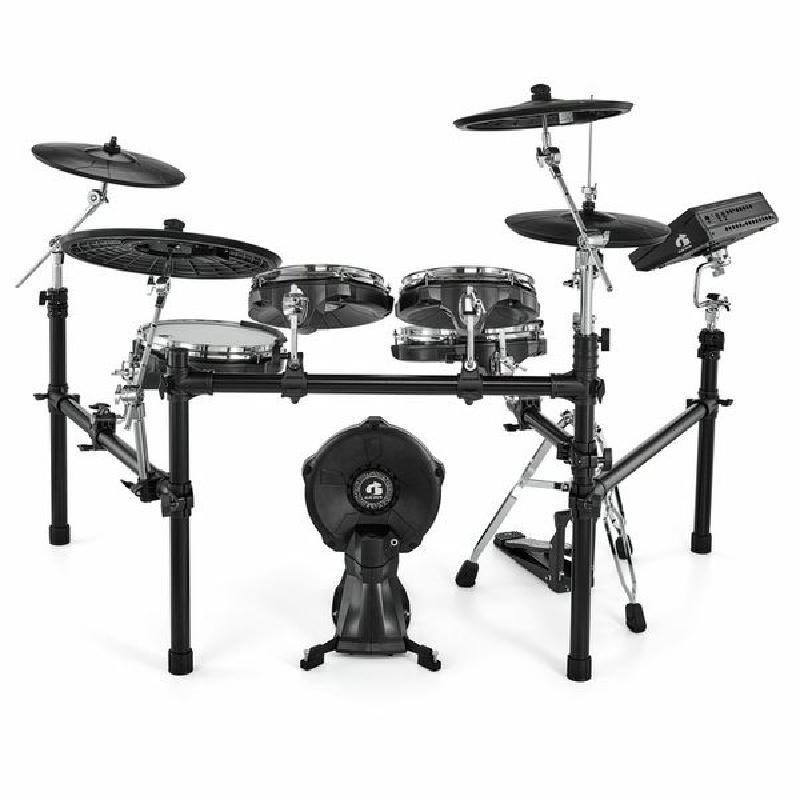 In mid-2017, I was in Germany at Gewa HQ and on the last day there, just before we were going to leave, we were shown a small black box which turned out to be an electronic drum module.
At the time, I remember thinking it looking interesting, although I didn’t get to play around with it as it was literally just the module, it wasn’t plugged into anything and it was a prototype. It wasn’t like the one for review here, but I remember it being quite similar visually.
I’d largely forgotten about that until now, but move forward almost five years and I’ve been playing around with an electronic drum kit from Gewa with a little black box controlling it all.
Now, I can’t remember the last time I did a review on anything electronic, although I’m not actually convinced in 20 years of doing this that I’ve ever done a review on an electronic kit either.
So the kit itself is a Gewa G5 Studio set. It’s a fairly standard five piece configuration of pads, with a set of hihats, two crashes and a ride. The kit also comes with a rack, cables and a hit stand.
The drum pads –
With the kit you get a 12″ two-zone mesh snare pad, two 10″ dual-zone mesh tom pads, a 12″ dual-zone mesh tom pad and a 10″ mesh kick pad.
These are all – to my mind anyway – fairly standard in terms of design and feel: they look like mesh-headed drum pads, there’s only so many ways that design is really going to present itself.
The base is a fairly hard plastic and on top you have a ‘tuneable’ mesh head with a triple flanged hoop. The pad sizes I found – again, fairly tried and tested here – to be both comfortable in relation to playing and easy to get around. The cable input is on the underside next to the clamp; said clamp works off a standard L-rod so can be mounted either on a rack or a stand.
The kick pad has a mounted base plate and structural support and, something I really liked and haven’t come across before, a large velcro-esque stripe which attaches to the floor to prevent movement. I found the whole thing pretty solid in that respect.
In terms of how well they trigger and the sensitivity you get, I had no complaints. I could very easily trigger the pads with just a light tap of my finger and I had no issues with cross-talk or anything similar during the time I had the it set up. It was good out of the box in that context.
The cymbal pads –
The cymbals you get are a 14″ triple-zone hi-hat pad, two 14″ triple-zone crash pads and an 18″ three-zone ride pad, all with a 360° playing surface. You also get a Gewa (DW made) hi hat stand which is, as you might expect, rock solid.
I can’t say they’re all that flashy looking, and to be honest they are a bit loud and hard when you hit them acoustically with a stick. But, when you put on some headphones and start playing, all that seems to melt away. To me, the actual playing feels a lot more like a cymbal than you might think.
The pads have a nice flow to them under the stick. Obviously, they’re not going to feel like a heavy piece of bronze, but I thought they felt pretty good when I was playing them and were quite responsive. The triggering out of the box was solid and sensitive and worked well to add to the all over cymbal feel.
I found that they were still triggering even with a very light tough which I was quite impressed with.
The module –
I can honestly say opening the box for the G5 module – whilst I wasn’t the first with this particular one – was like opening a new smart phone or tablet box; it genuinely was an experience. It’s been thought through in that respect. 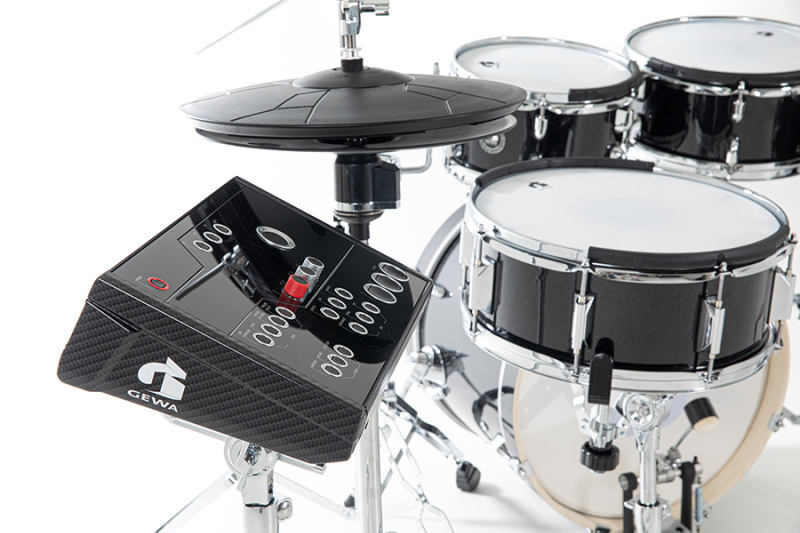 The module contains 901 sounds, 40 preset kits, 128 user preset kits, up to 1000 individual samples per instrument, high-resolution multi-layer samples and 3D Sonic Image for a realistic room sound.
In addition, it has Bluetooth Audio and MIDI, up to 128 WAV samples can be imported (maximum length of 70 minutes mono, 35 minutes stereo), real-time .WAV recorder, compressor and 3-band fully parametric EQ for each pad, compressor and 4-band EQ for each output, effect banks (ambient, instrument reverb, room reverb, multi-FX), 12 types of room reverb, 9 multi-effects,
To connect the kit up, you get 12×6.3mm jack trigger inputs and the module is actually fully compatible with pads from other manufacturers (which is a great selling point to me), two 6.3mm jack master outputs, four 6.3mm jack direct outputs, one 6.3mm headphone output and one 6.3mm mix  input. For MIDI users, you get MIDI IN/OUT/THROUGH, USB Midi (for use with VST-Players) and USB audio (2IN / 8OUT).
The unit itself is pretty big, but [I think, anyway] reassuringly ‘pro’ looking. It actually reminded me of the old Ddrum modules from the 80s and 90s but with a modern design.
The user interface of the module I found to be pretty easy to follow for the most part. There were one or two bits I would need to refer to the manual for but for the most part, set up and getting around were very straightforward.
In summary, I had a huge amount of fun with this kit.
To look at, the pad design isn’t too dissimilar to what has been around for ages but the important thing with anything like this is how they perform, and they performed really well in my testing.
As I’ve mentioned, the triggering is really good and all of the pads/cymbals provided a very comfortable, and I felt realistic too, level of playing. 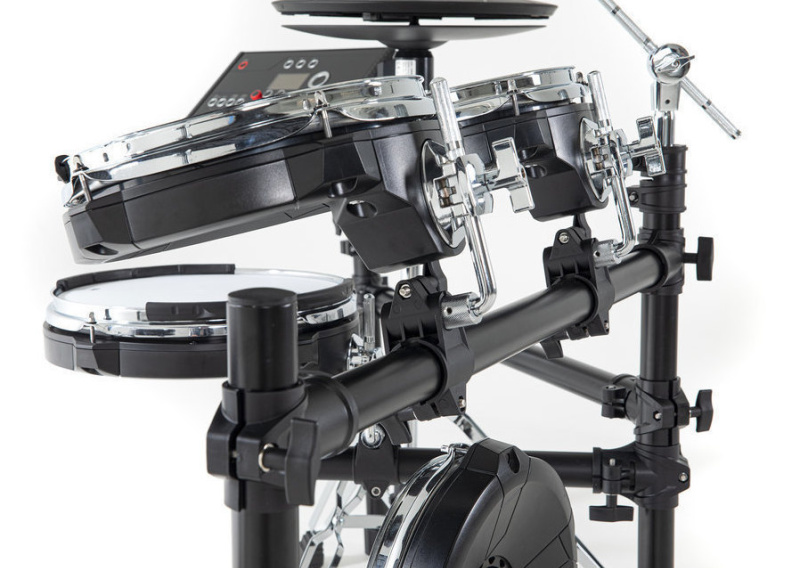 Since an electronic kit is way different to a straightforward acoustic kit, I’m really only scratching the surface with my comments here, but I like that you get the rack and loom together with the hardware so the kit is basically ready to go. All of the cables are numbered – a touch I appreciated immensely – and this made everything that much easier when setting the kit up. Ok, not earth shattering or new, but I think it helps.
While this isn’t Gewa’s highest end module, I would say it probably needs a little bit more of general drum/effects knowledge to get the most out of it, but not that much to get started. It’s not an entry level module, basically; I would say this is an upgrade kit more than anything else. It’s no different to how people upgrade to better acoustic kits.
I didn’t try the bluetooth facility, MIDI or loading any samples but that was because I didn’t have enough time. However, I can say that loading samples into the unit doesn’t seem hard from what I saw and understood having spent a bit of time reading the manual.
The preset kits all made sense and you’ve got all the basic ‘classic’ choices in there too – the vintage kit, the rock kit, the general purpose kit, the jazz kit, the electronic kit, as well as some percussion based sets too. Some of the more classic options you’d need to be able to see through the creative naming, but again, they’re there (think Simmons, Roland 808 & 909 for example), plus you also have some more obvious choices like kits from Gretsch and Drum Workshop.
The quality of the samples themselves sounded really good too, there was a decent range/choice available, although given the price point I think that’s really a given.
As I said, with this sort of thing, I’m always going to be missing out a tonne of features etc and that is unfortunate because there is a lot to this kit. Suffice to say though, I think it looks cool and it certainly sounds good and most importantly triggers well.