If you follow the changes in the electronic drum world, you’ll probably have noticed the change in mesh head pads over the last few years.

Since the TD10, mesh head pads with centre cones have been ‘the thing’, the ‘one to beat’ and other ‘sincere’ marketing phrases. Even the original woven mesh head electronic pad – the Pollard Syndrum in 1976 – had a central pickup, just it wasn’t a foam cone back then.

If you are unfamiliar with what we are talking about here, very quickly, drum pads with mesh (woven nylon or Mylar thread) drum heads for electronic drum kits usually have a small foam cone, just pressing against the under side of the centre of the mesh head. These foam cones pick up the vibration of the head being hit, and the vibration is passed down to a piezo pickup, where it is converted to a voltage and sent to the drum module to trigger a sound. 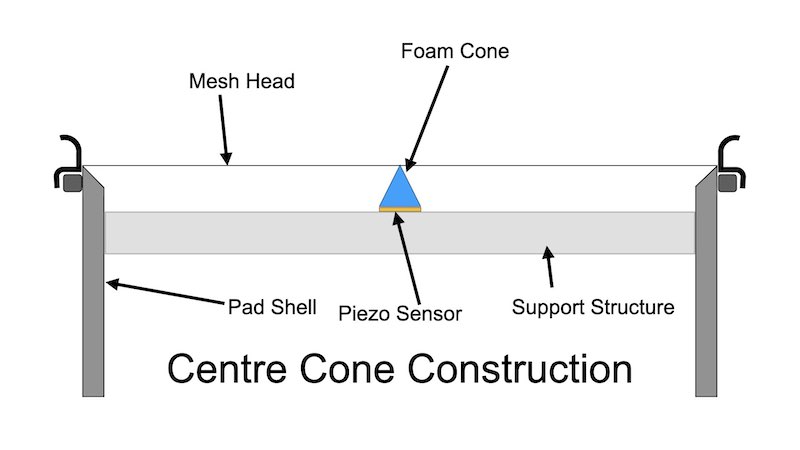 The only thing with the centre cone construction is that it actually isn’t very good. The location of the cone under the very centre of the head means that there is a massive ‘hot spot’ in the dead centre of the pad, meaning any hits which dead centre will be met with a massive trigger spike and an extra loud sound. Not very realistic. And we drummers usually play around the dead centre of our pads/acoustic drums. 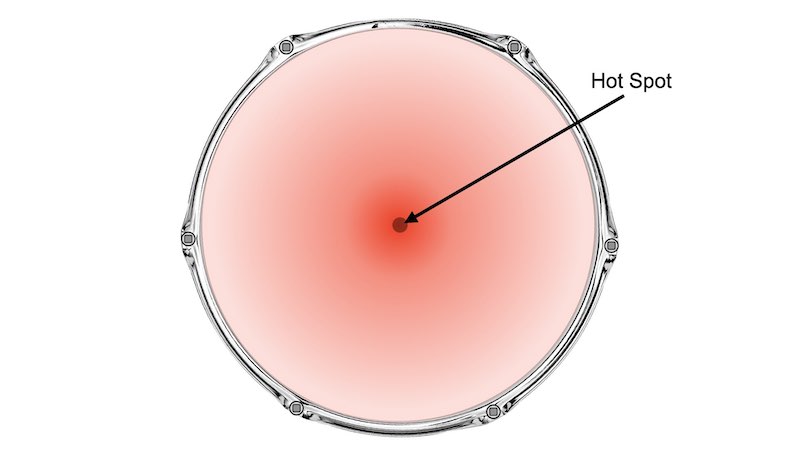 To compensate for the hot spot, manufacturers would try one of two things. The first was to recognise that the hit was dead centre (by analysing the waveform of the hit – see later) and attempting to adjust the volume accordingly, not always successfully. The second was to turn up the overall pad sensitivity so that any hits, anywhere over the whole centre of the head just massively overloaded the trigger input of the module – the centre spot could not ‘hot spot’ because it just couldn’t physically get any louder. This method (the easiest one to do) meant that centre cone pads generally had little dynamic range in the centre of the pad, so most users got used to playing away from the centre, just for a bit of variation. Again, not very realistic.

The other thing about centre cone construction is, that as it is just the tip of the cone touching the head, the sensitivity of hits further away drop off pretty quickly, unless it is compensated for electronically. Mesh, as I have mentioned quite a few times before, is pretty rubbish at passing vibration through itself (the weave allows vibration to dissipate very easily) so centre cone pads tend to not trigger too well towards the edge. 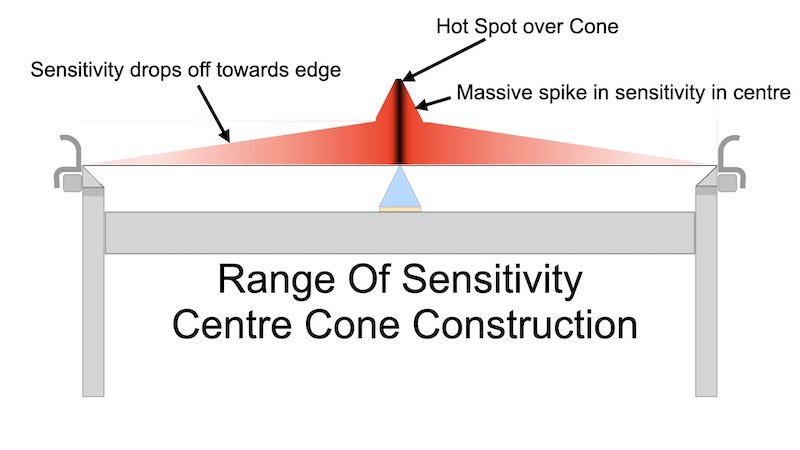 One of the main reasons that manufacturers stuck with the centre cone construction was for positional sensing. This (in case you don’t know) is when a module or software triggers position correct sounds depending on where on the drum head surface it has been played – when you play in the centre, it sounds like you are playing in the centre with a drier, crisper sound, and when you play at the edge it has more ring, with more harmonics and less attack.

Positional sensing was originally done by ddrum on their ddrum3 kit in 1993. The module analysed the waveform of the hit and looked at the angle of attack of the waveform – the shallower the angle, the further away the hot was from the centre. All very simple, and great for listening to drums in isolation, but not really noticeable on big stages. To be blunt, positional sensing is more for bedroom players (and those making YouTube videos of course!). On big stages and in your average track mix, you just aren’t going to hear any difference it makes.

So the centre cone pad ruled for many years.

This was because ATV (who were mostly ex Roland engineers anyway) built the kit they always wanted to build, and correct things that they thought needed to be changed. So they used 3 edge cones to pick up the vibration on the heads. And these have a distinct advantage over centre cones.

With 3 edge cone construction, the wonders of maths come into play. When you play in the centre of the head, the vibration is being picked up equally by all three cones, which are equally spaced (120 degrees apart) around the head. As you move away from the centre of the head, you move away from one cone (so the volume output goes down at that point) but towards the other 2 cones (whose output goes up). Therefore, edge cone pads have a MUCH larger area of sensitivity, and are much more consistent. 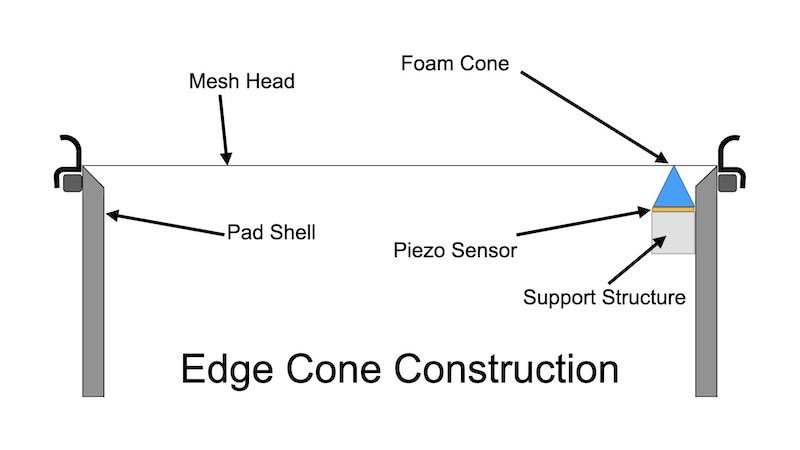 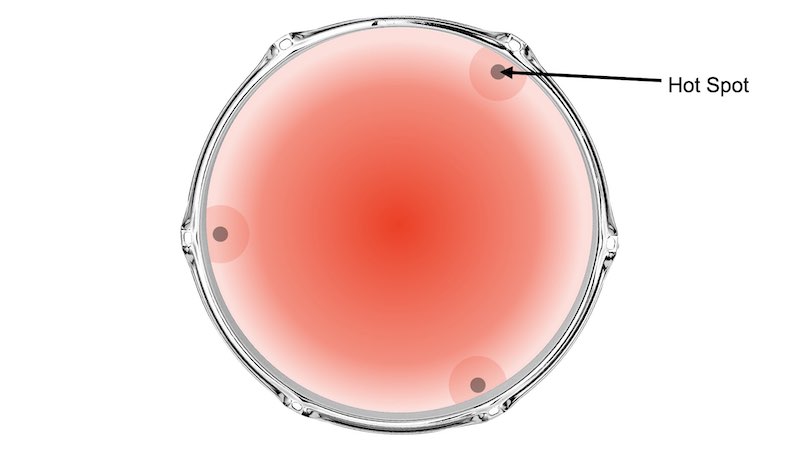 The other advantage of edge cone pads to centre cone pads is that with centre cone pads, the vibration can occasionally cancel itself out. Imagine throwing a stone in the dead centre of a perfectly round pond. The vibrations spread out, hit the edge and then come back towards the centre. When they meet, again, dead centre, if they are perfectly timed, one ripple might be going up, and one is going down, and these will cancel each other out to zero. Exactly the same can happen with centre cone pads (more usually with Mylar heads rather than mesh, but it does happen).If you have used centre cone pads, you might have experienced total drop outs which were not caused by other trigger settings.

Edge cone pads don’t do this, as any hit will get to the three cones at different times, and as there are 3 of them, even if one vibration is going up (positive) and one is going down (negative) and these two cones cancel each other out, there is always a third to provide more trigger information. 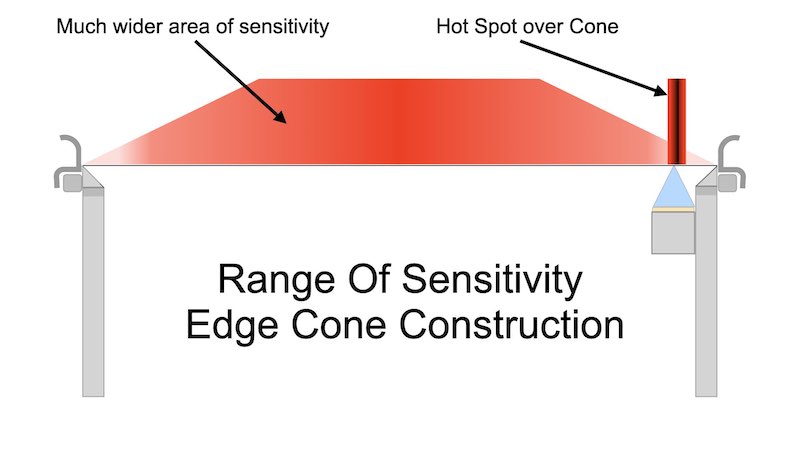 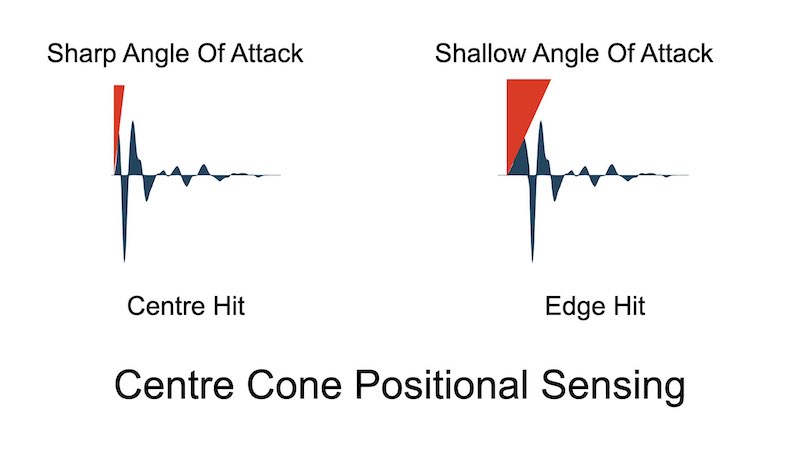 Edge cone pads aren’t perfect – they still have hot spots, at the edge over the cones – but as we play less right at the edge, and MUCH more in the middle, these are noticed less. 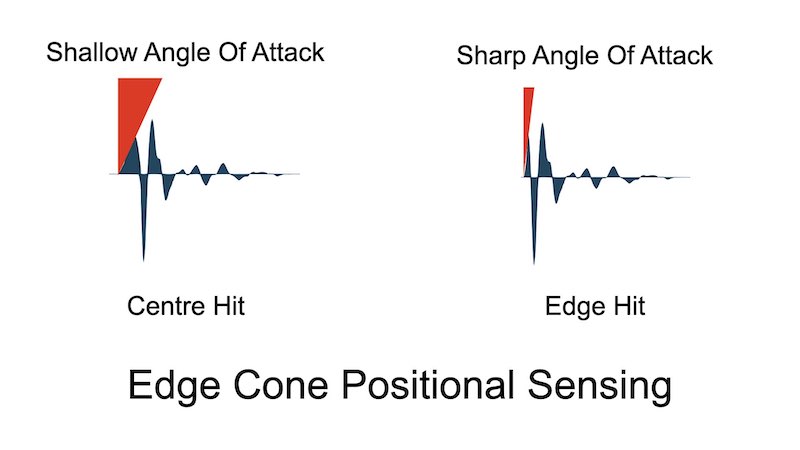