Not all heads are the same… 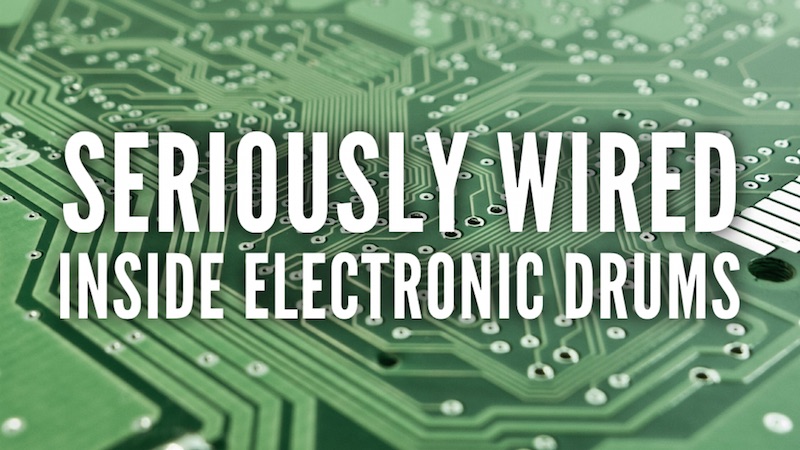 A little bit of history

At the very start of this article I should point out that there really is nothing new under the sun. While most people think that the mesh head was new when the TD10 was launched back in 1996, it actually goes much further back. Somewhere on my computer I have a copy of a patent for a woven mesh head from 1896, and I have another one from soon after that which was a bit different (IIRC it was coated, woven cloth head for ‘quiet practice’ – sound familiar?)

Between 1996 and 2010, there was much confusion about all mesh heads being ‘patented’ and ‘no one else could use them’ but it was all rubbish. Unfortunately, it appears that only a few people bothered to have a look at the original patent, so it took 20 years for other companies to begin catch up. The threat of litigation was all it took to protect the idea. One company did go to court over mesh heads, but that is a story for another time…

Woven heads on electronics are not new either. Back in 1976, Pollard introduced the Syndrum which had a woven Kevlar head (like a marching head) on its small drums pads. The reason they used it was because of its stiffness and long life (more of this later). But this is not what we came here to talk about.

Why doesn’t a mesh head feel like a normal head?

This is all perfectly factual stuff, but have you ever considered why a mesh head doesn’t feel like a polyester head? Its all to do with how the two materials stretch or not. A Mylar head stretches pretty evenly – push down in the centre of a Mylar head with your finger and you’ll see a fairly even dip from the edge to the centre, with just a hint of a slight crater under your finger tip. Do the same with a mesh head and you’ll see a much bigger crater under your finger.

This is because the polyester of the Ambassador is one piece and it stretches pretty much uniformly. With the mesh, because the strands of nylon are not joined or glued at each point where they touch, the strands roll over each other and even out any tension put on them. Which ever point is under most tension (where your finger is pressing or where the stick hits it) has the deepest crater, but as the tension moves away from the pressure point, the tension is released by the strands moving over each other and the head returns to (almost) its normal position.

So thats why Mylar and mesh feel different. What about how different mesh heads feel?

The first thing to point out is that all mesh heads are not the same. A single ply mesh head from one company will feel different to another manufacturers as the nylon (or whatever material they decide to use) will be different. The amount of stretch in a head will ultimately affect its triggering properties too. A stretchier head will trigger better than a less stretchy head.

Why not to trigger a marching head

If you want proof of this, set up a trigger on a standard Ambassador weight head. Then put the same trigger onto a drum with an Aramid, Kevlar or other ‘hi tension’ woven marching head without adjusting the trigger settings. You’ll find you’ll get very little trigger signal out of the drum with the marching head on. This is because the Kevlar/Aramid head doesn’t stretch like Mylar so the vibrations don’t travel across the head so well. It is very ‘stiff’.

[On this subject, a client once got in touch convinced that his module could magically ‘tell’ what head he was using. It worked great with an Ambassador, but refused to trigger when using a marching head (which he used for its longevity). Remember this if you like swapping out your heads regularly!]

And then heres another thing that is worth remembering. The more layers you add on to a mesh head, the more damped it is and the vibrations don’t travel so easily. For this reason, a single ply mesh head (such as a Silentstroke) will give you a muchbetter triggering result than an expensive three ply mesh head, but at the same time, will feel less realistic. Conversely, a three ply mesh head will feel muchmore realistic, but will be much worse at triggering (especially noticeable in the ghost notes).

You also have to factor in the tension of the mesh head. The more you tension a mesh head, the greater the friction between the strands of the mesh so the more stiff it feels. To get the best from a mesh head, you need to crank it up much higher than a Mylar head to give a similar performance.

Blimey! Its complicated all this isn’t it?

Some tricks to try

One trick to borrow if you don’t like the feel of mesh heads on snares and toms is to cut some upholstery foam to size so you can wrap it around the inside of the shell. This has the effect of damping the vibrations and can improve the feel considerably. This was done on the original ddrum4 mesh pads (which work very well with just about all modules btw).

On the subject of bass drums, never use a felt bass drum beater on a mesh head. The rough texture of the felt with rub away at the nylon and will cause it to fail in no time at all. Instead, use plastic or wood, but make sure they are as smooth as possible to avoid unnecessary friction.