Most people are familiar with the concept of MIDI now (and if you’re not, just Google “Dolbear Seriously Wired What Is Midi?”), but there still confusion about when is a computer needed, and which direction does the data travel, so lets have a quick look. Again, this is the subject because of something that happened in the last couple of weeks, and after sorting it out I realised that quite a few people were having the same issue… so here we go!

Originally back in the early 1980’s when MIDI first appeared, all ‘MIDI gear’ had two, or three, 5 pin MIDI sockets (sometimes called 5 pin DIN). One was labelled OUT, one labelled IN and occasionally (if you had expensive gear or it required it) one labelled THRU. MIDI cables are mono directional (data only goes one way) so it was nice and logical – you could follow the MIDI path by following the connections from OUT to IN. 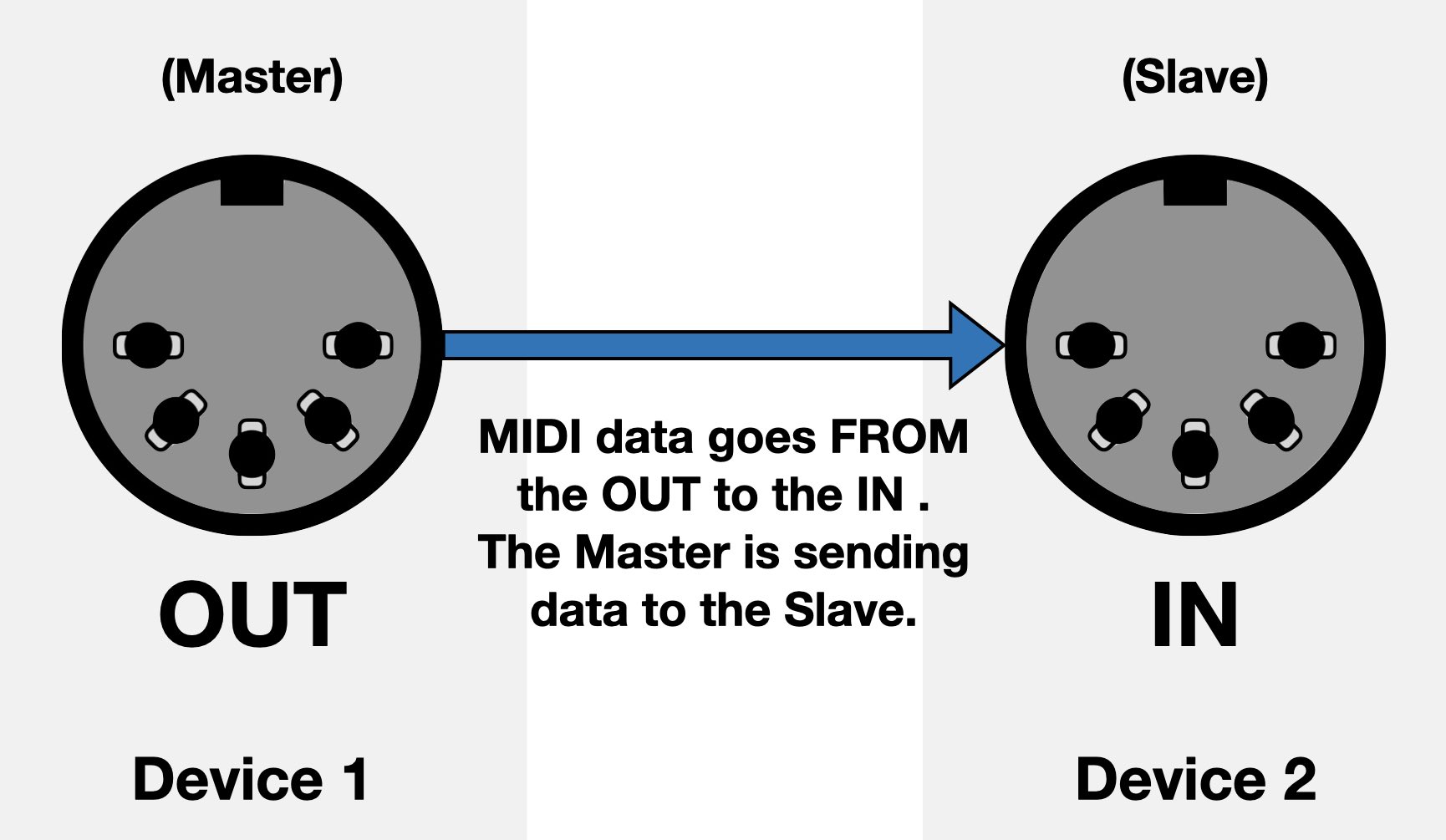 You connected the OUT of one piece of gear (the master) to the IN on another (the slave) and then whatever was sending MIDI data from their OUT socket (the master) had control of the one connected by the IN socket (the slave). Simple (why can we not, in the UK at least, not read the word ‘Simple’ without hearing it in a Russian accent and thinking of Meerkats? Advertising has a lot to answer for!).

The THRU socket mirrored whatever was coming into the IN socket, so if you wanted to chain a load of gear together, you connected the THRU of the first slave to the IN of another device (2nd slave) and the master controlled the 2 slaves. Any note played on the master was duplicated on the slaves. You could theoretically chain loads of devices together and pressing one key on the master device would make ALL of the slaves play the same note – cue massive 80’s keyboard sounds! 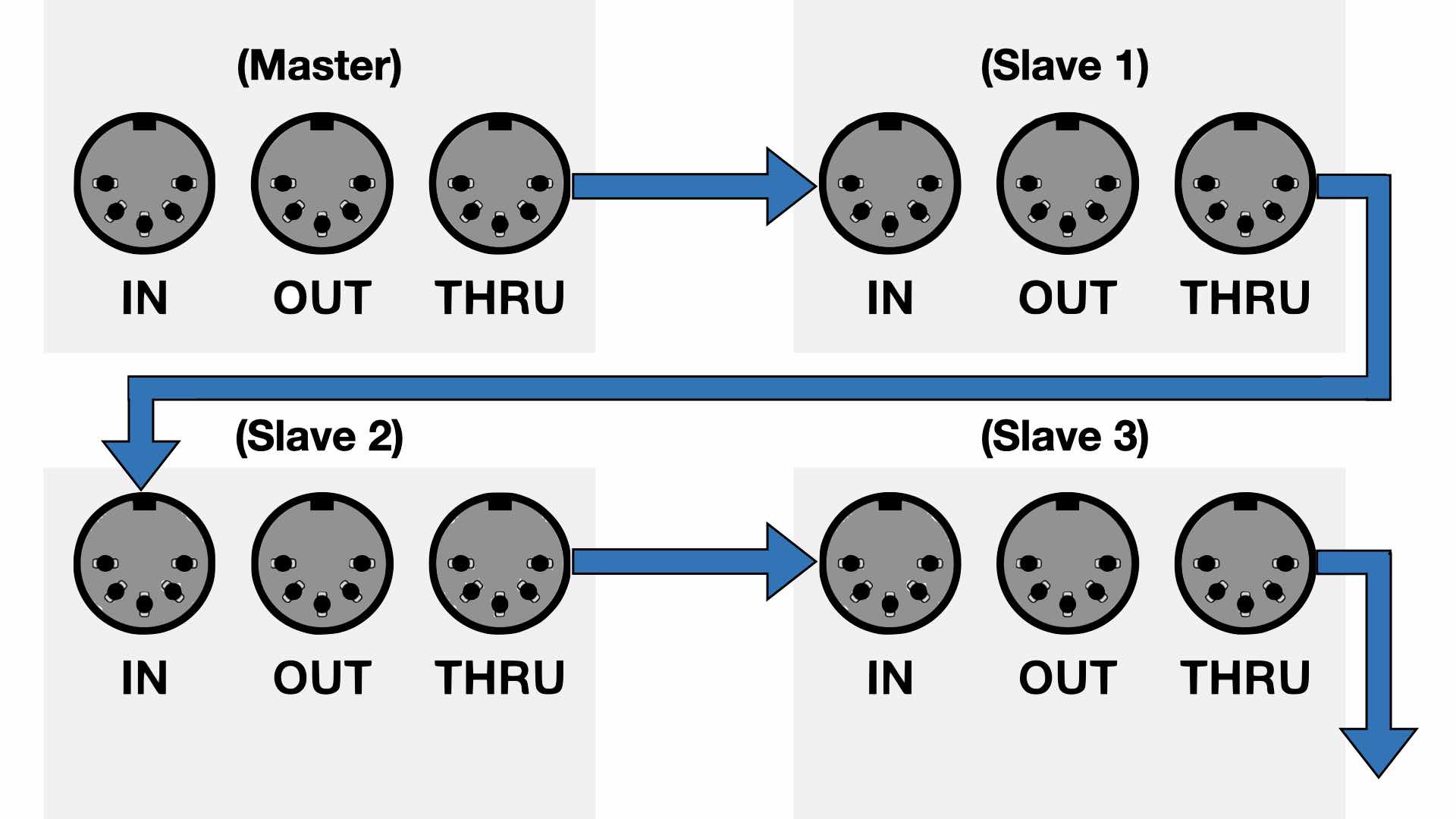 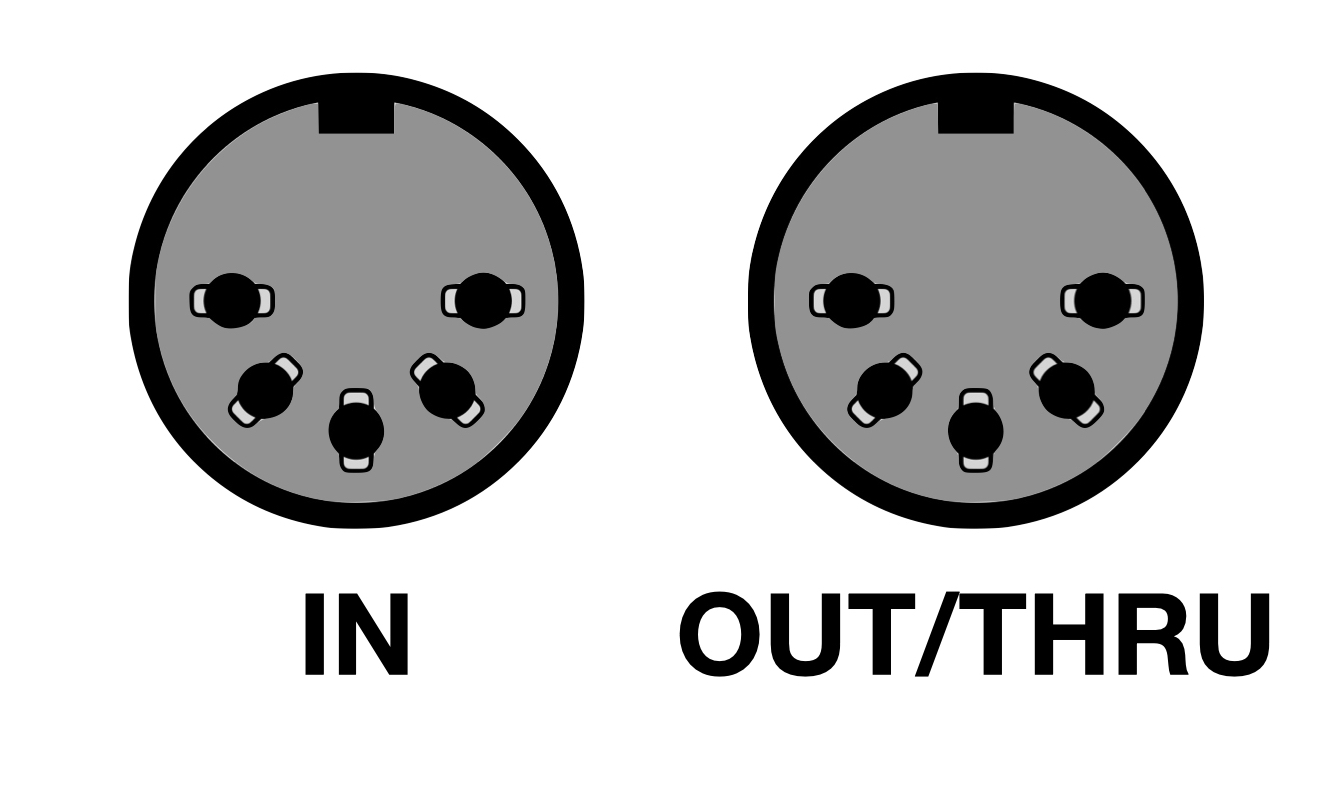 Over time the THRU socket disappeared as manufacturers realised they could save on money, and use the OUT socket as a THRU as well – switchable internally. I’ve just had a look around my studio and I have found I don’t own a single device with a dedicated THRU socket.

All was good in the land of MIDI until musicians started using computers. Initially, we would connect our MIDI gear to our computer using a dedicated MIDI interface. As we often needed to use both IN and OUT then there was a lot of cabling hanging off the back of the devices. 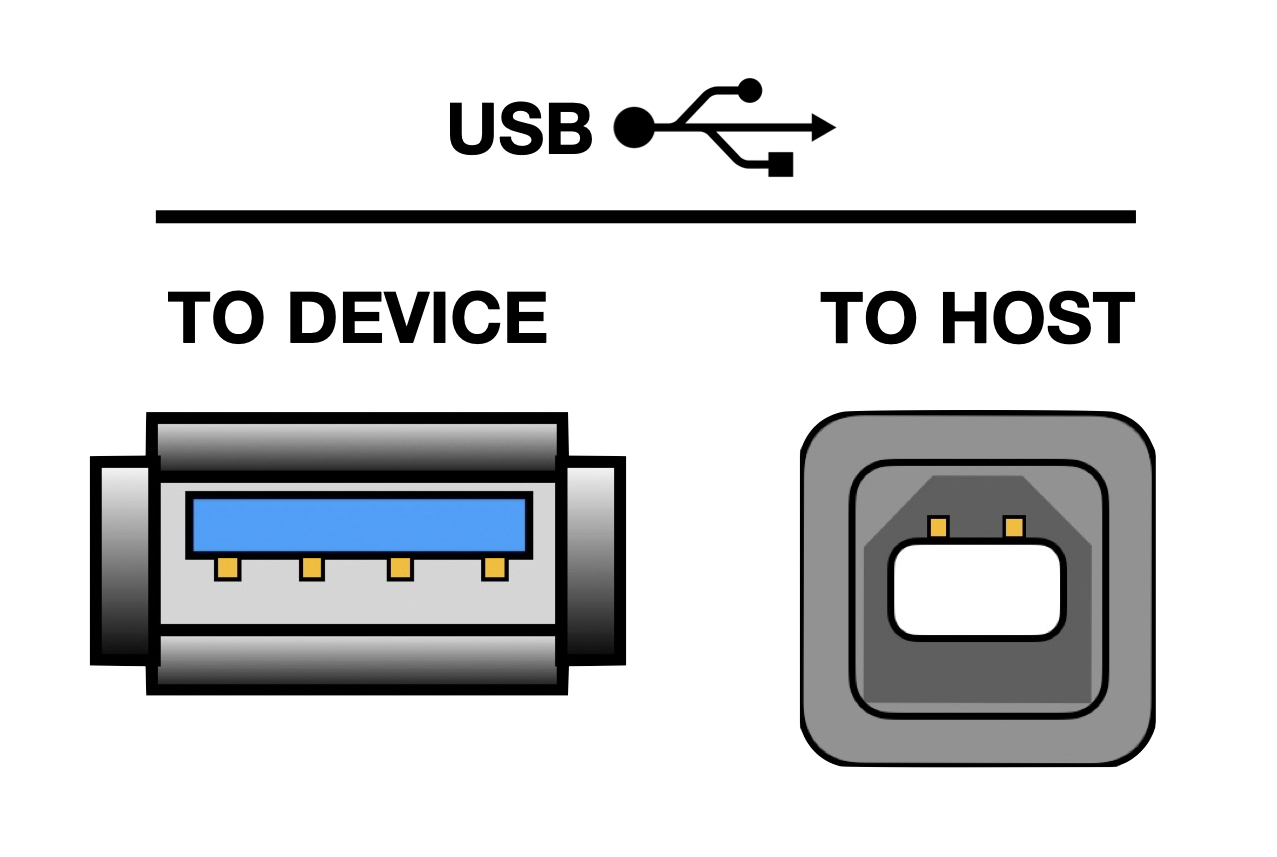 So some smart person decided that when computers were involved it made more sense to use a single cable. As USB was a sexy new (back then) connection, it was decided that we would have USB MIDI – a single lead which is bidirectional (data travels both ways so no more IN and OUT) and it would link out devices to out computers.

This was all good, but over time manufacturers decided to leave off the IN and OUT sockets – after all, we were all working with computers, right? – and MIDI sockets were seen as dated and old fashioned – we had sexy USB now!! 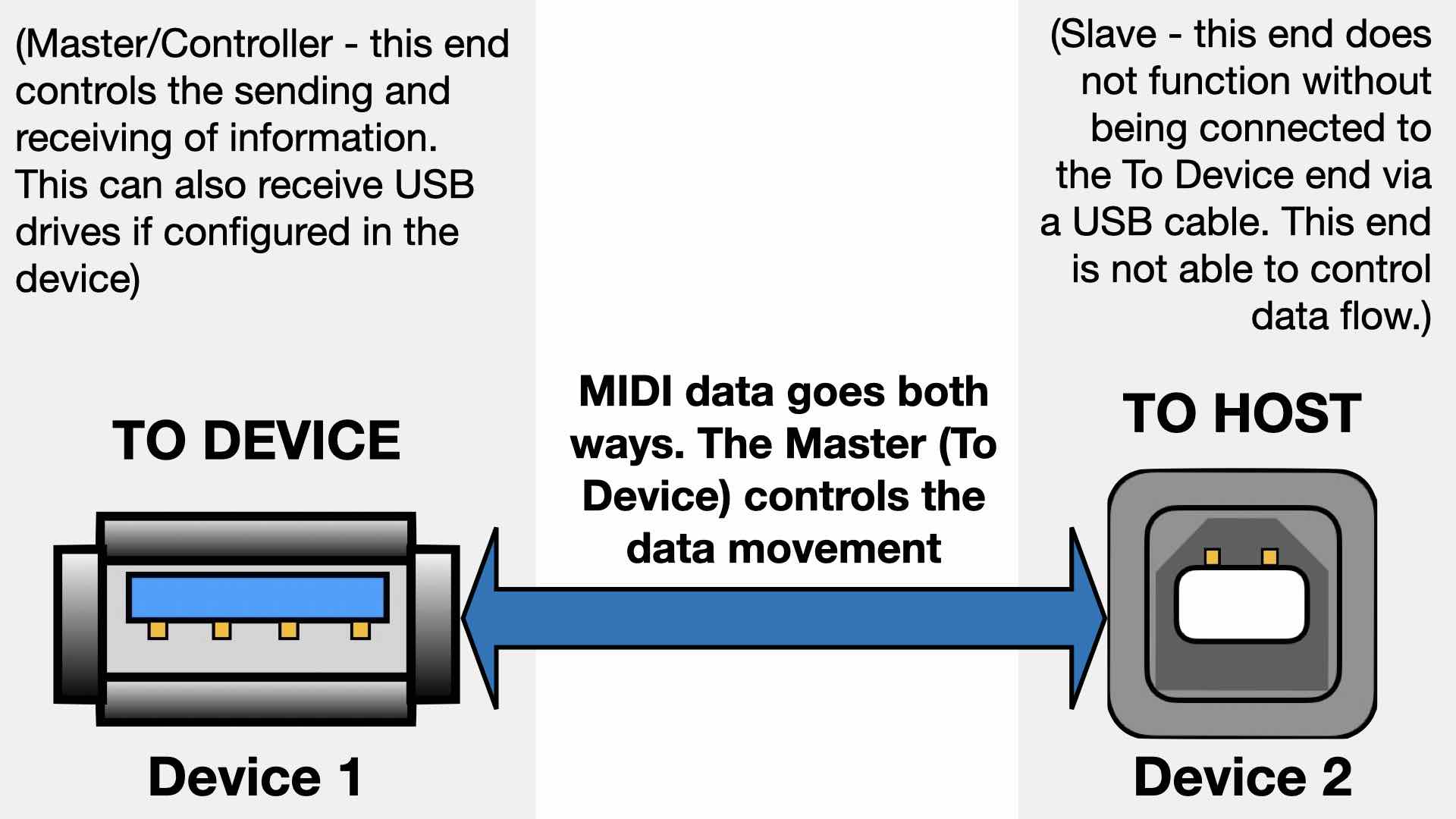 You see USB MIDI needs a Host device. One ‘end’ has to take charge, unlike standard MIDI cables. Its all to do with the fact that they are bidirectional and require a timing clock – something needs to be overseeing this and a computer is perfect – it has a clock and can process different data simultaneously. AND you can’t just connect the To Device on one (non computer) piece of equipment to the To Host on another (non computer) piece of equipment – it is not designed to work that way.

But if you want to connect a drum module with just USB and a sampler, also with just USB, you need to go via a computer, which sort of defeats the object if you are trying to cut down on excessive gear.

So later a small UK company called Kenton, who make useful little MIDI devices, came out with their USB MIDI Host box (which is now on it’s MK3 iteration). This is a device which converts USB MIDI into 5 pin socket MIDI and vice versa. And no, I’m not connected with them, but for the amount of business I have probably put their way, I wish I had shares. 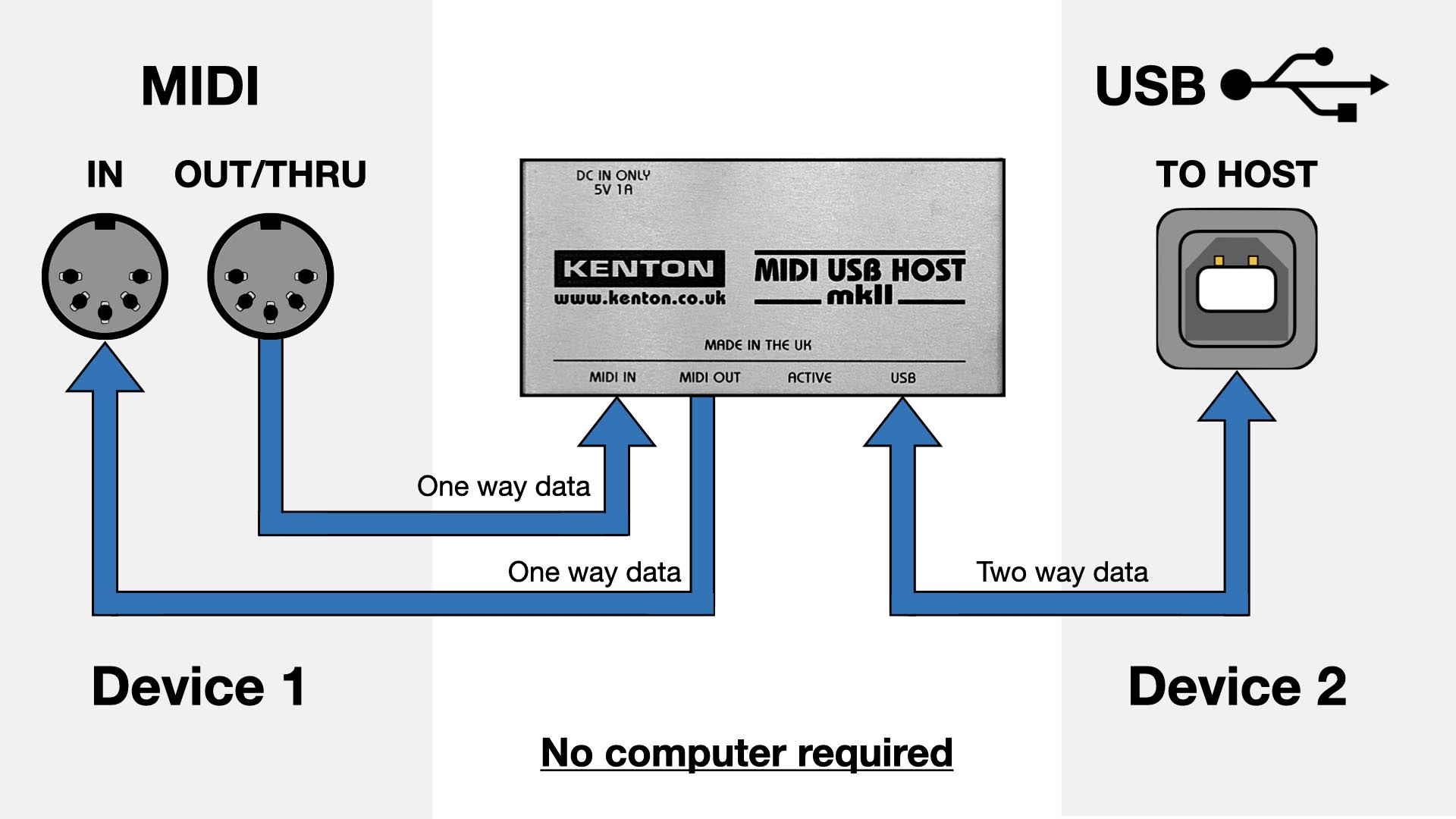 These have been complete life savers for me over the years and they have allowed me to connect almost everything to everything else. (I say ‘almost’ as some devices which act as a USB hub – I’m looking at you ATV aD5 module – wont connect to the Kenton; they have to go to a computer)

So you don’t need to go via a computer now and your drum module which only has USB MIDI can now happily talk to your vintage sampler with it’s 5 pin MIDI IN socket.

So there you have it. MIDI, and USB MIDI is generally pretty simple, but hopefully this may have ironed out some rough patches.