Behind The Scenes At Young Drummer Of The Year 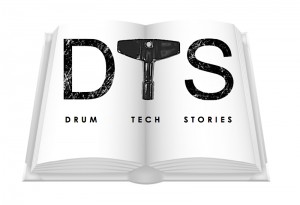 This month I thought I’d give you an insight into the backstage world of the infamous Young Drummer Of The Year show, an event that myself and a colleague from DTS were asked to help run.

I received a call from the boss – Mike Dolbear – in late December 2017 asking about my availability. I had worked on the show once before back in February 2012, (the year that Callum Blair emerged as the victor) and was pleased to be asked to contribute to the show again. As previously mentioned I decided to take along one of my trusted DTS techs – Ben Richards – with me for the weekend so he could get a feel for the event.

Now in its 17th year, the YDOTY has become an institution on the British drumming calendar. Its testament to the show owners and producers that the event is still relevant since its inception in 2002. The competition attracts hundreds of entrants every year keen to demonstrate their skills. The format of the competition is based around a short clip that the entrants are required to send in, these clips are then judged by a panel who whittle down the mass to a shortlist of 40. The 40 clips are then judged again by a panel of industry experts, who compile the final list of 10. These 10 drummers are then invited to the finals, held in Leamington Spa. 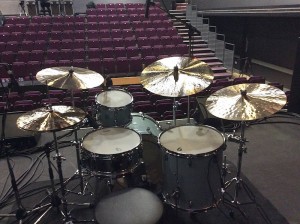 The weekend for team DTS started by meeting two of Mike’s long serving assistants of the event, Gareth and Matt. As well as providing our outward-bound transport to Leamington Spa, they held a wealth of knowledge about the event that we could call upon over the weekend. We traveled from our meeting point in North London; car loaded with tech tool boxes, over night bags and even a Roland kit that Gareth had provided as a warm up kit for the contestants, to a drizzly Leamington Spa. Here we met up with Mike Dolbear and his family, his partner in YDOTY Ade Holbrook, and all headed off for a team meal to discuss the plans for the following morning and the show in general.

A 6.30am alarm call on a cold, wet February morning isn’t most peoples idea of the ideal start to a Sunday, but feeling refreshed after a good nights sleep I was ready for the 7.15am breakfast meeting. We had agreed to meet the venue staff and PA Company at 8am and begin the day’s work. The first task was to assist with the unloading of the PA. Again, the audio company have been working with Mike on the event for many years (I knew some of the guys from the 2012 event) so they have their tasks down to a fine art. The show is run on a formula that doesn’t change from year to year, this promotes great consistency across all areas of the event.

Shortly after the PA was loaded in, the drums arrived courtesy of Mel Stewart who is the rep for the British Drum Company who provided the three kits which form the backbone of the event. The drums, which have to be identical in size (i.e. 22/10/12/16+14sn), are played by the 10 finalists throughout the day. Our brief was to make the kits sound identical so that no one kit would have a sonic advantage when it came to judging a contestants performance. The finalists aren’t allowed to choose which kit they play, this is a random draw when they are allocated their performance number. 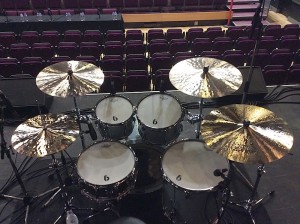 Once the tuning of the kits was complete and the logo heads fitted, we began to set up the kits in their positions A, B and C, with A stage right, B centre stage, and C stage left. Although the kits were identical in size they were all different colors, Light Blue (A), Black (B) and White (C). We then allocated a cymbal set (again randomly) to each drum kit, this year there were cymbals provided by three of the main manufacturers Zildjian (A), Paiste (B) and Meinl (C). I asked Mel to line check each of the kits so I could listen from the front to make sure that the sound was as equal as it could be, Mel also gave some valuable input on what it sounded like from the players perspective. After some minor tweaks to the drums we were ready for the first batch of contestants.

We would see each contestant in reverse order from 10am onwards. The first two contestants (10/9) took their seats at their allocated kits – in this instance it was 9 on A, and 10 on C. We had agreed that Ben would look after the contestants using kit A and I would look after those using kits B and C. Our job was to work with the finalists to make sure that the kits were ergonomically correct for them – we could adjust heights, change the positions of stands, angles of toms etc but the contestants weren’t allowed to add anything. They were allowed to use their own bass drum pedal(s) and stool if they wanted. The players were then allowed a brief line check to make any changes required to their monitoring on stage. Once each player was comfortable we took detailed notes, measurements and pictures so that we could accurately re create their setup when it was their time to perform. Some of the players brought double pedals with them which presented a slight challenge in regards of positioning for each kit with the time allowed. We continued in this manner until each player was happy and they were confident about their setups.

During the lunch break we compared notes to make sure that we were ready for the show. We knew the order of the contestants, the kits they would be playing and the format of the show – namely that each contestant would play a solo piece, then a piece to a track which they had previously been sent and then finally a play along with a live bass and guitar player to a piece of music they had only heard that morning. After the show start and the introduction of the judges it was time for Mike to introduce the first contestant who would perform on kit A while the rest of the contestants were held in a room out of sight and ear shot. The second player then took to the stage to perform on kit C, swiftly followed by the next player on kit B. Mike then took to the stage to talk about the event in more detail; at this point it was our job to quickly re-configure kits A and C into the setups of players 4 and 5. This involved some pedal replacements, height and angle adjustments etc. 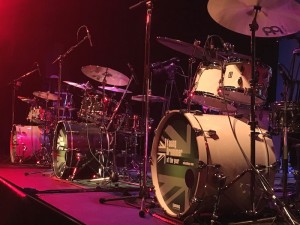 Once the final two players (4&5) had performed it was time for the interval. During this time we re-set kits A,B.C for players 6,8,7. The format of the first half was replicated in the 2nd which, again, included a mid show kit change for the final two players 9&10. After all the contestants had performed the auditorium was cleared while the judges deliberated their decisions. This allowed the stage team to re-set the stage completely for a performance by last year’s winner. Using kit B, we moved the drums onto a riser at the back of the stage and removed the other two kits and associated mics, cables, etc – this would allow space for all the contestants and judges to be on the stage later. Within the change over we were able to pack down the other two kits ready for load out. Last years winner performed for 20 minutes watched side stage by all the contestants.

With the stage now full of all the contestants, judges and hosts; the winner JJ Wallace was announced. Pictures were taken around the final kit with judges etc before we were allowed on to break down the drums. Loading out was a fairly quick process with everyone keen to get home after a long day.

A great event, one that I, and DTS was proud to be part of. Roll on next year…

About the Author: Martin Oldham