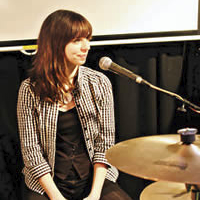 Gemma has enjoyed making a living out of drums and percussion as a teacher and player since graduating from the ACM’s degree course in 2005. She’s been fortunate enough to play in Europe, Japan and the UK with a wide range of musicians and artists, including Cee Lo Green, Cyndi Lauper and indie electro duo, Robots In Disguise.

Gemma began regularly contributing to mikedolbear.com in 2009 with a series of interviews on female drummers from both sides of the Atlantic, which included Samantha Maloney, Crissy Lee and Emmanuelle Caplette. Non-feature interviews followed with the likes of Steve Forrest, Mark Richardson, Ash Soan and Craig Blundell, as well as a new feature on West End Drummers in 2011.

In her spare time Gemma is most likely to be found stroking cats, reading books, working on ‘The New Breed’ or tweeting.