“It Ain’t Heavy, It’s My Story” – The Autobiography of Bobby Elliott 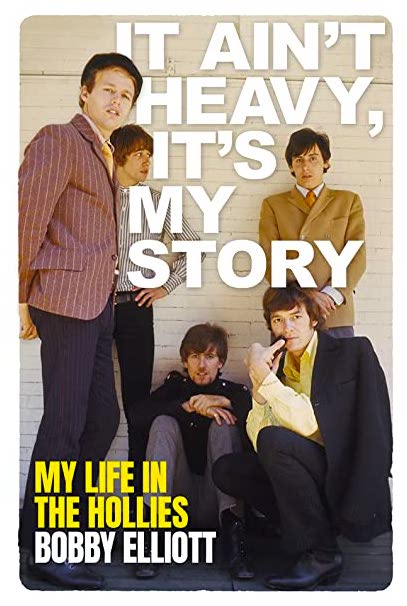 I’ve known Bobby Elliott since 1963 when we were both starting out on the path to fame and possible fortune. We’ve kept in touch over the last 58 years and before I read his book, I thought I knew a great deal about him.

‘It Ain’t Heavy It’s My Story” is therefore something of an education in itself. I really thought we’d grown up in pretty much the same circumstances albeit 176 miles apart. But Bobby’s autobiography tells a very different story.

For a start, Bobby Elliott not only narrowly survived peritonitis, but he knew a lot about aeroplanes, turned down a gig with Paul McCartney and once owed the Inland Revenue a quarter of a million pounds. Added to that he initially started his working life in the coal mines!

He wasn’t actually hewing the black stuff out of the ground with a pneumatic drill and a shovel while wearing a miners’ helmet with a lamp on it though. He was apprenticed to be an engineer and look after all the machinery necessary to coax the black stuff out of the ground and bring it up to the surface. But he certainly did have to go down to the coal face a great deal.

Bobby, who unlike me was Robert to his mum, was born in Burnley, Lancashire where mining was the main occupation people in his neighbourhood took part in. As it happens my mother was from County Durham and found her way to London via St Andrews in Scotland. Rather than returning to her roots in the Northeast, when she married my father, she carried on even further south. This saved me from the very real prospect of working in the mines like all the other men in her family did. Chances are, I would almost certainly have taken the lift to the coal face every morning too. Fortunately for my sanity, my folks didn’t stop moving until they reached the leafy suburbs of eastern Hertfordshire.

It should come as no surprise we backed a lot of the same artists. Stars of our day would turn up to top the bill at local dance halls and cinemas and we, having done our own spot; would then back the likes of Johnny Gentle, Michael Cox, Ricky Valance and a great many others with exotic names made-up by Svengalis like Larry Parnes. It sounds complicated, but since they invariably played a set’s worth of rock ‘n’ roll standards along with their own hits, it actually wasn’t.

Once he gets into his stride, Bobby paints a colourful picture of life on the road, in the studio and generally rocking all over the world, And he liked it, he liked it!

He speaks glowingly of all the London Clubs we frequented, like the Cromwellian, Scotch at St James, The Speakeasy, Bag o’ Nails et al. He also waxes lyrical about the people he met there like Jimi Hendrix and many other guys destined to become, in no time at all, the great and the good of the music world.

The Hollies are still doing their utmost to keep going strong in the pandemic and have a tour scheduled with ‘new’ famous replacement guys in their midst. These are new guys who have been there for decades!

Bobby retells a little story which perhaps sums his generation of musicians (and mine) up best.

The Hollies van was in an accident on its way up to Scotland. This warranted an entry in his otherwise highly comprehensive diary as: “Van crash, gear OK!”

There’s  another pithy diary entry from Bobby while they were touring Poland and the police in Gdansk attacked some enthusiastic young girls in the audience with truncheons. The Hollies left the stage in protest but were forced back on again by the police.

There’s another story about Graham Nash falling out of the van because someone carelessly left the side door unlatched. Graham was evidently saved by the fact that he was asleep and it was raining as he skidded along the ground in his new, still not broken-in Levis.

Bobby tells some great tales and has a wealth of material to sift through some of it pertaining to the pranks Eric Haydock pulled. They were touring with The Dave Clark 5 and for some reason Eric delighted in playing tricks on Dave and the rest of the ‘Five’ – things like cutting guitar leads with wire cutters just before the DC5 started their show. The girls would be shrieking and no guitar sounds would be audible until the leads were changed. You could imagine how happy Dave was to be part of this mayhem!

Of course the book is certainly not just about Bobby Elliott – it’s about the rest of the Hollies too and I was pleased to see that just like every other red-blooded group the Hollies had their ‘This is Spinal tap’ moments too. It’s generally accepted that amongst people who were there, Spinal Tap is nowhere near the truth and what really happened is a great deal more embarrassing (remind me to tell you one day about my drum-stool incident in Bakersfield in front of 10,000 people!)

Eric Haydock was one of music’s ‘difficult geezers and, as far as I can see, the other contender for this accolade does not appear in “He Ain’t Heavy…”

Further into the book, Bobby has this to say about his part in ‘the British Invasion’.

“British bands and musicians loved US  Blues, Rock and Modern Jazz which have been my penchant. We had been playing music influenced by Americans for most of our lives unthinkingly and enthusiastically repackaging what we had absorbed, and adding a twist of British flair and bravado to it, just for good measure”.

Many younger American musicians were excited by the opportunities offered by the invasion and rose to the challenge. However, it’s far to say lots of others were not best pleased by us exporting their own music back to them.

Bobby went out of his way to catch up with his jazz heroes in America and actually sat at the feet of Gene Krupa in a New York bar. Sadly this was at the very end of the Chicago Flash’s career when he was playing with just a single sax player. Otherwise he found Dannie Richmond, Charlie Mingus Max Roach, Stan Getz, Miles Davis, Tony Williams, Billy Higgins and numerous others playing in clubs and bars.

Bobby talks with great clarity and authority about his long-awaited introduction to the much larger than life ‘Big Apple’ which  excited guys like me, Tony Meehan, Rick Rothwell and all our other pals  were experiencing for the first time.

Bobby found it even more exciting than he expected and bumped into some very interesting people on his way around America including Rodney Bingenheimer and the infamous Cynthia Albritton.

The book takes us up to 1980, and Bobby asked me should he write some more to bring it up to date. I feel he certainly should keep going with another book just as long as he includes Bob & Bobby’s story about ”Why won’t they let us drummers sing?”

No I’m afraid I can’t tell you which one of us was Bob and which was Bobby but that was the point!

The book is published by Omnibus Books and the internet advises me a signed copy can evidently be yours for £20.

If you’re looking for in depth details about EMI studios, Number 1 records like “ I’m Alive”; appearing on the world’s top TV shows and what it was like being a highly-successful drummer from the sixties;it’s all here in “It Ain’t Heavy It’s My Story”.