Zildjian recently sent us a small selection of relatively new cymbals to try out. 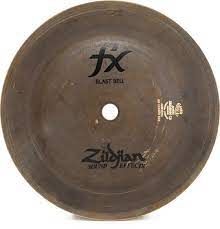 I have a lot of small bells, chimes and general bell-like cymbals and I have to admit, Zildjian’s large Zil Bel is my favourite of all these. For me, it has the perfect blend of pitch and thickness of sound which makes it the definitive bell cymbal. It’s also the one model that I have in my head as a benchmark when out comes to any other cymbal of that nature.

The FX Blast Bell has been designed in collaboration with Matt Greiner. It’s a little smaller than the aforementioned large Zil Bel at 7”, although it’s bigger than the small model. The main differences between the two, however, are the profile and that the Blast Bell is lower pitched than said Zil Bell.

The profile of the Blast Bell is more like a cup chime than Zil Bel and it’s also raw looking as opposed to being in a more brilliant finish. It kind of has that dark, organic look to it, which I quite like.

Sound-wise, I find myself once again defaulting to wanting to hear that Zil Bel-esque type sound.

Obviously, this has been designed by Matt Greiner for a specific sound which it clearly has, and therefore my opinion on it seems rather empty in that context. Arguably, that’s the same with any signature product, and so long as it’s achieved what the artist was looking for, it’s a winner.

For me, the FX Blast Bell does look cool and the sound is clear, pure and cutting, kind of what you want from a bell. Plus it has a beautiful long consistent sustain. However, if I had my choice, what I’d really be interested in trying would be a bigger version of the Blast Bell; I think that would potentially be perfect.

I remember the first pair of 15” hihats I ever played, a pair of Zildjian Quick Beats; I borrowed them and felt they were huge and too heavy compared to the 14s I normally used. These days, I regularly use 17” hats and they feel completely comfortable. At the time though, I couldn’t wait to go back to those 14s. Moving forward three decades and I’ll admit, I didn’t even notice the slight size difference when playing these new hihats and only realised they were unusual when I came to write this. How times change…

Thinking back though, does anyone remember the K/Z hihat combo from a few decades ago?

I have a 13” pair that I put together myself, and as anyone who has tried that combination will tell you, it’s definitely something that works. This is a similar thing with the Fat Hats, but with a mix of A and K-style manufacturing techniques and with a much smaller top/bottom weight gap. The weight disparity with these hihats is much less obvious than with the K/Z hats. They very much also have that ‘K’ vibe to them.

Zildjian says that these have been designed to ‘combine bright and dark manufacturing techniques’ and to be ‘a “go-to” hihat sound for studio and live settings.’ I think these are good descriptions.

I can completely see where Zildjian are coming from with those statements. Personally, I would describe the sound as being soft but crunchy when opened up, with a bright edge to them. While I didn’t try them with a band, I think they’d blend in nicely in that context.

I don’t know if I personally could use them for everything, but they’re certainly some of my favourite hihats that I’ve reviewed for a while. 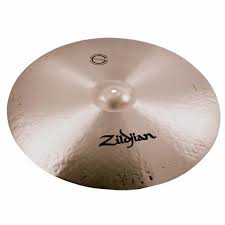 This cymbal was designed in conjunction with Russ Miller. I’ve understood the concept behind it was to basically have a crashable flat ride. Does that not make it a crash/ride then? Perhaps. But also perhaps not.

To quickly summarise this cymbal, it’s beautiful. Apart from physically looking really classy, it really is a crashable flat ride and feels great to play.

Flat rides are not all the same.

Ok, so they are conceptually the same – flat profile, no bell, the obvious bits – but they do play differently.

Some of my flat rides have some ‘give’ in them when played, i.e. they move a little more under the stick, and some are quite rigid feeling. This cymbal definitely fits more in the former bracket. The common feature of all flat rides is the defined bow sound and lack of overtones (caused due to the lack of a bell).

The Staccato Ride features a smaller mini cup (bell) which controls the amount of overtones and has a lower overall profile, which Zildjian says allows you to hear a distinct “flat ride quality” stick definition whilst also being crashable.

Compared to a regular medium ride cymbal, it certainly feels thinner and lighter under the stick.

The bow definition is clear, the edge has some wash to it and the bell has a sound to it; not a loud sound, but it’ll be passable in most musical styles. I would describe the sound it produces as light, delicate, nuanced and bright.

By virtue of its design, this ride has its limitations, but that said, that’s not a negative.

This ride is not a basher and it’s not going to cut through loud music, but it probably will sit perfectly in the background of a mix. It will provide some character to a recording. It will provide a wonderful light alternative to a main ride where articulation and air is needed.

Not a big selection this time round, but they’re definitely some of the more noteworthy models I’ve seen recently, and I liked them.