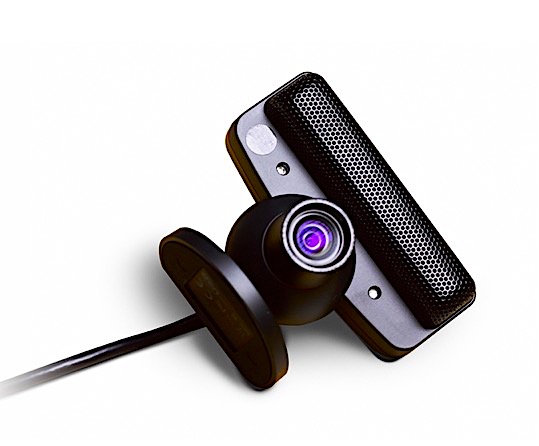 I started playing drums in the 1980s; the time when electronics and drums really started to properly meet each other head on. At that time, the electronic drums available – certainly initially – generally had a hard playing surface which was, shall we say, not that much fun to play on. Over three decades later and I still remember something the guy who got me my first kit told my dad – ‘people who grew up playing on these electronic drums wouldn’t be able to play an acoustic kit’. But why?

Well, amongst the several reasons possible, I think it was mostly because of the feel involved: playing a hard rubber surface is just not the same as the give and rebound of an acoustic drum. Move forward a couple of decades to Aerodrums, where you’re literally air drumming with no surface at all.

Aerodrums is a unique product and even though it’s been around for a few years now, I’m not aware there isn’t anything else quite like it about.

The system consists of a camera, the adapted sticks and ‘pedals’, and your computer. That’s it. The camera and the accompanying light (which fits over the camera) sits in front of you and sees the movements you make with the sticks and the ‘pedals’ and translates this to the kit on the computer screen. 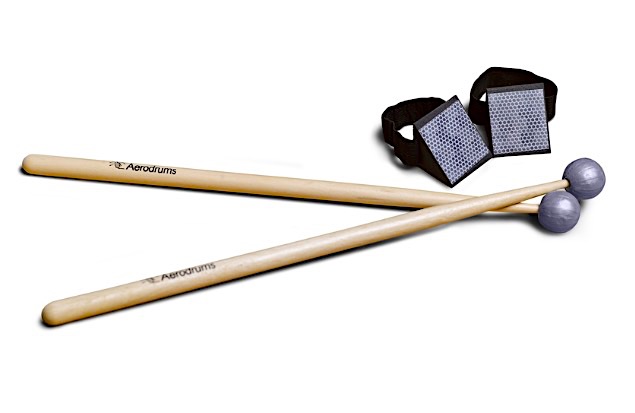 … and some special sticks and ‘pedals’ (strap on reflectors)… and you have a drum kit.

You get a choice of several different kits as presets or you can make your own up. I quite liked all of the preset kits and the sounds they provided. They’re not earth-shattering but they’re good quality and appropriate.

To set up, you have to download the software and install it which doesn’t take long.

The physical side of things – and I accept it could have been me and my unhelpful front room – took me a little longer. It wasn’t the top half of the kit I was having issues with, but rather just getting the ‘pedal’ side of things down where they would be seen by the camera each and every time. I did try and try but I couldn’t get it quite right to where it was flawless and smooth. That was a little frustrating, but I think was more me.

Ok, yes, it does look a little weird to begin with but I think that comes with the territory. However, I found the fairly light sticks did not feel strange with all the arm waving and they seemed to be a good weight in that respect. They have little reflective balls on the end of them which is what the camera sees.

What I found almost straight away as someone who isn’t a beginner at playing drums was that you’re almost forced into taking more notice of your accuracy and stroke height because if you don’t you’ll either hit something you didn’t want to on the kit or miss something completely. As someone who can sometimes be a little blasé with stick heights, I found this quite useful.

The technology involved with Aerodrums works really well; you can’t play a buzz roll but the system will detect movement down to a pretty low level so you can play with dynamics. I managed to play hihat accents and ghost notes with no issue although it did take a little more brain power to adjust my playing to get the desired result.

The interface and user experience on the computer side of things is straightforward and easy, and I found everything to be pretty simple to get around. You can import songs to play along to, play to a click – which like much of the menu system is controlled virtually by moving one of the sticks and pressing the button – change kits, utilise MIDI and change your preferences.

The one thing I didn’t like about the user interface is the placement of the menu ‘button’ as it was way too near the kit and both confusing to the eye and could be opened by accident when playing. Having it off to the side would be much better I think.

There’s one other thing which was a problem for this review, but would not be a problem for 99.9% of users. Because the camera uses light to detect the stick and ‘pedal’ movements, I gave up trying to film it after many, many hours as my video lights caused havoc – totally wiping out the detection. I tried moving the direction of the light – not much better. I tried not using lights, but then the footage was rubbish. I could not find a happy medium, so that is why there is no video attached to this review apart from the official Aerodrums footage. But, like I say, this REALLY isn’t going to be a problem for pretty much every other user, apart from the odd reviewer!

So, breaking it down…

You can play these anywhere; so long as you have a small space you can play them and they’re quiet too if you’re wearing headphones. They’re light to carry, and even in my small hands I could carry my laptop and the two Aerodrums boxes with no effort at all, and they’re very easy to set up. Aerodrums are also quite cheap compared to either electronic or acoustic drums.

But, I think I need to address a few obvious points, namely, who is this for and are Aerodrums a toy or an alternative to electronic or acoustic kits?

Let me start by saying that I don’t think Aerodrums are a toy. I think that would be almost offensive to suggest and quite belittling of the technology that went into the design.

That said, and this is the reason I mention my little introductory tale above, I think as a learning device Aerodrums may have a physically limiting appeal after a while because there is literally no feel or interaction with a drum involved. To that end, I just can’t help thinking that by its nature, the system would get outgrown after a while of decent personal progression. It’s great for working out the mechanics of a groove or the like, but could you progress from this to a real kit if this is what you’ve started on? I mean, you could do, but it would be a bit strange I would guess. It’s probably the same argument if you just start on a practice pad or hard rubber electronic pad too, and people do that all the time.

For me, this is the biggest downside of Aerodrums: you simply can’t develop a ‘touch’ or physical relationship with them like you will with an acoustic drum, or even a pad. I also found that to get a consistent bass drum going my foot needed to be flat on the floor and that’s not how I play. But then again, it seems to me that playing Aerodrums, just like playing electronic drums or an acoustic kit, needs to have its own distinct technique to accommodate the medium and that isn’t unusual or negative.

But, given that you can record with Aerodrums and the system will work with MIDI, you could then do lots more with it. I think the fact that they don’t take up any real space and don’t necessarily require the aforementioned touch means they certainly could appeal to singer/songwriters/creators looking to put some drums down without programming them. And then you have the obvious beginners and general hobbyists too.

Personally, I couldn’t use Aerodrums for playing live because I don’t think they would suit the way I play, but that’s me, and clearly others disagree. A quick search on YouTube and you’ll find people doing just that. Yes, you will need some sort of PA or other device to get the volume up, but it can be done and it clearly works too. Practice though? Yes, I could see myself using them. In fact, I’ll go as far to suggest that if you can’t for whatever reason have an acoustic or electronic kit set up at home, Aerodrums seem to me to be the next most logical step. I mean, everything is there like it would be on a regular kit; the leg placement is the same, the heights of the drums and cymbals are right and certainly for me, they were comfortable too. Looking back at it, the whole experience as far as playing was concerned was comfortable and I have to feel that is one of the strong points of the system.

If you’re a beginner or have just a passing interest in drumming, I can absolutely see how using Aerodrums could help you develop better accuracy and technique (in terms of stick height etc) or indeed just help you realise how much fun playing drums is and get you into it. After all, fun is what playing drums is really about, and these are fun. Even my wife – who does not share my fascination with drums – wanted to have a go and that’s saying something because in ten years together she’s been behind my drums a total of once.

This is obviously a niche product but I can see it having a wide ranging appeal to anyone who wants to learn to play drums, practice quietly, has limited space, record or even just have a bit of fun on.