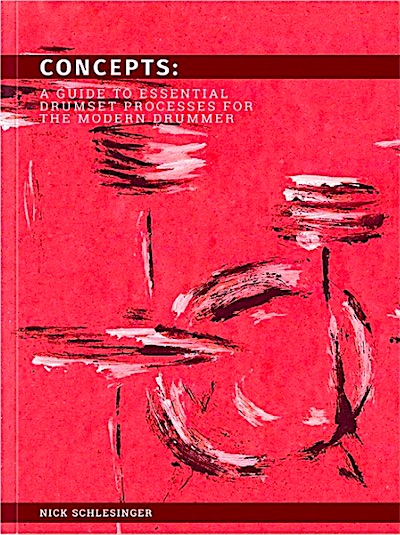 Concepts: A Guide to Essential Drumset Processes for the Modern Drummer – Nick Schlesinger

London based drummer and educator Nick has just published his own concepts book with the theory behind it being rather simple; drum books are great, exercises are good, but having a wider understanding of, and the ability to use, a concept is better.

He’s created his own codes for concepts and ideas that work in different situations, for example a “G” next to an idea means it’s a groove based concept, “O” would represent an idea for use with ostinatos and so on.

I like the idea behind this book and think there is some merit to what Nick is saying; that actually, taking an idea or a concept and running with it can really open the door to new sounds and grooves, solos and so on.

As Nick says the journey is more important than the destination and I think that is why books like this can be is useful; there is no “right” or “wrong”.

He starts with a section on independence and co-ordination, before moving on through other ideas such as permutations, accents and linear phrasings.

It’s a clearly laid out book and each concept is well explained and easy to understand and he does occasionally reference other material which is worth investigating, and in the back is a full page of both listening and reading material.

There are other books out there that have a similar methodology behind them, but Nick has done a decent job of putting together a collection of concepts and ideas in an accessible way. 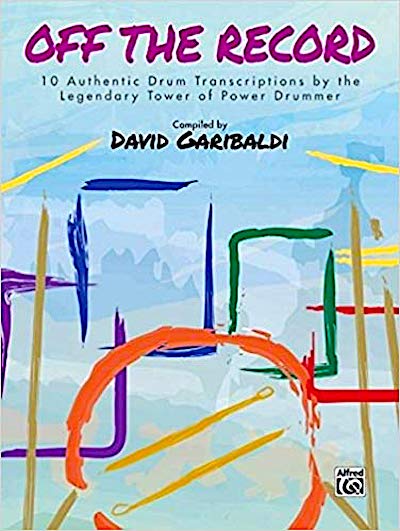 Off The Record – David Garibaldi

Lets start with the obvious, if you don’t know who David Garibaldi is, take 10 minutes, open another tab and google Tower of Power andWhat Is Hip?

If, like myself, you’ve listened to David’s playing and wondered justwhatit is he is playing, this is a book you’ll absolutely love and you owe it to yourself to give it a look.

In essence this is a very simple book, featuring authentic transcriptions of TEN Tower of Power tracks, including What Is Hip?, Soul Vaccination and Squib Cakes.

It’s a high quality book with the songs written out in full kit notation over multiple pages; which means it hasn’t been crammed in to the point it’s hard to read. You will however need to get into turning pages FAST. Knock Yourself Outfor example runs over ten, yes TEN pages.

For me, being able to read and learn for myself what David plays on some of the most iconic funk drums parts ever written, is fantastic.

It’s rather amusing to find your favourite ToP track and realise your approximation is more than a little, well, rough!

If this is your first foray into David’s playing, his other educational books such as Future Sounds are a great introduction to his playing methodology and even if you have worked through them this will still throw up some fun technical challenges.

A fantastic book, nothing to not like except the sudden realisation that you (and I) are not quite on DG’s level! 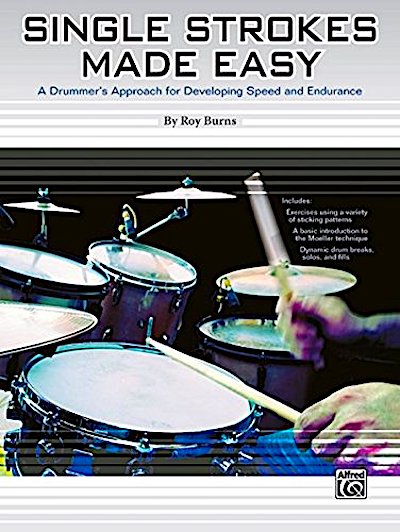 From Alfred Music and respected player and teacher Roy Burns comes a book with one rather simple goal, to develop your rolls.

It’s a fairly thin book (28 pages in fact) but manages to pack in a decent number of exercises to help you develop speed and endurance.

I was surprised by the content slightly as the name would suggest just a book on single strokes but inside there are exercises that feature double strokes and the various paradiddles.

The importance of accents/dynamics and even a brief introduction to the Moeller technique are also covered inn this book which I wasn’t expecting and I felt Roy did a good job of very briefly explaining the concept behind Moeller. Of course if you wish to delve further into that there are other books that will take you there, but as an introduction it does the job.

The book even goes as far as to introduce 5 stroke rolls and a few solos involving all of the ideas in the book wrap it up.

It’s not the biggest book in the world and certainly not the most in depth, but I actually quite liked it. Some times educational books can try and do everything and not do enough, but I think for a beginner student this book could be an effective primer to get the hands moving.

My favourite exercise in the book was the Inverted Swingfrom the solo’s toward the end. It’s enjoyable, a little tricky to begin with, but equally it’s not impossible.

Why the book is called Single Strokes Made Easy however,I don’t quite know but for about £7, it’s not a bad shout.