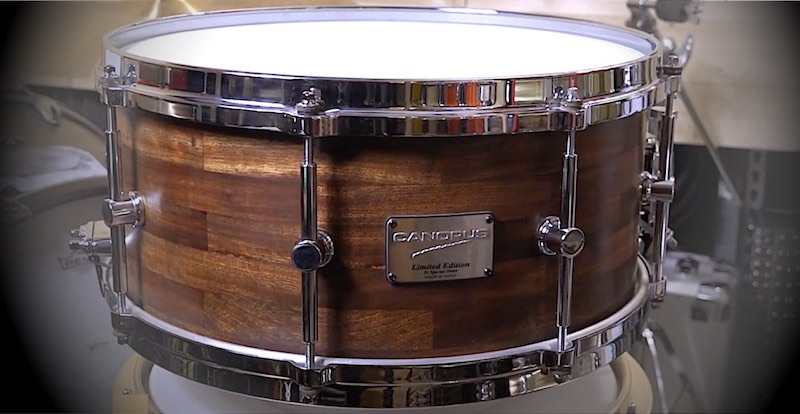 I’ve long maintained the majority of times we’re attracted to a [new] snare drum is initially because of the way it looks.

Yes, it is possible these days – in fact, more so now than ever – that we can come across a visual and recording on any social platform and see and hear a cool drum, but for people of my generation and earlier, you certainly saw a drum before you heard it.

Now, it’s been a very long time since I’ve reviewed any Canopus drums so I was looking forward to this one.

Canopus – for those of you who aren’t familiar – is a Japanese company, arguably most well known for making the Zelkova snare drum (and later kit too) from a singe log. A single log in this instance doesn’t mean ‘one ply’ or a ‘single plank of wood’, rather the Zelkova is cut out and formed inside outwards from a log. It’s very cool stuff.

This limited edition drum features Remo heads top and bottom, die cast hoops, Canopus wires (obviously), eight double-ended lugs and a segmented shell. The drum was well made and finished, as I would have expected from Canopus since they have a reputation for quality.

Having had the drum to play with for a little while, I admit I had great fun with it. 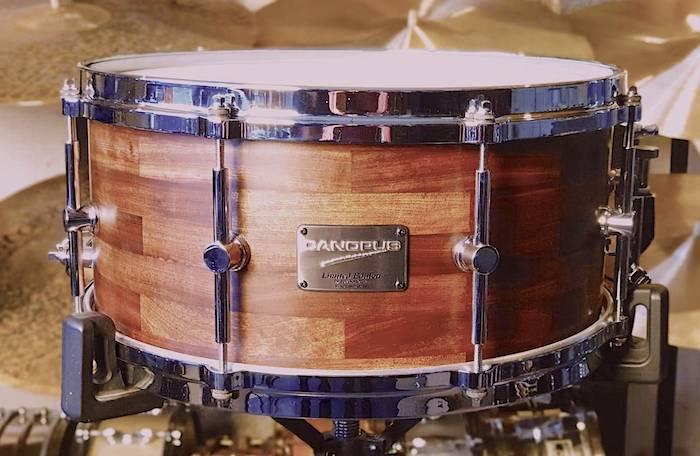 It looks wonderful, with the colouring and grain of the segmented pieces being visually contrasting, it plays really nicely and it sounds fantastic. In fact, I loved the sound of it.

The die cast hoops give the drum a nice pure ring with a very even decay, it has plenty of attack to it and it’ll go up or down with ease (although I’m not sure why you’d need a 5.5” deep drum to go all that deep). The last tensioning in the video wasn’t all that low really but without the wires on it sounded like a tom. Not really my thing, but nice enough all the same.

I’ve never been the biggest fan of the snare mechanism the company uses, but I fully admit that’s a personal thing on my part; it works and works just fine.

Anyway, all in all, it’s a great drum and one I would feel happy and comfortable using for most musical situations.

Thanks to Rubix Drums in London (Canopus’ UK distributor) for the loan of the drum (https://rubixdrums.com).

For more on Canopus, go to https://canopusdrums.com