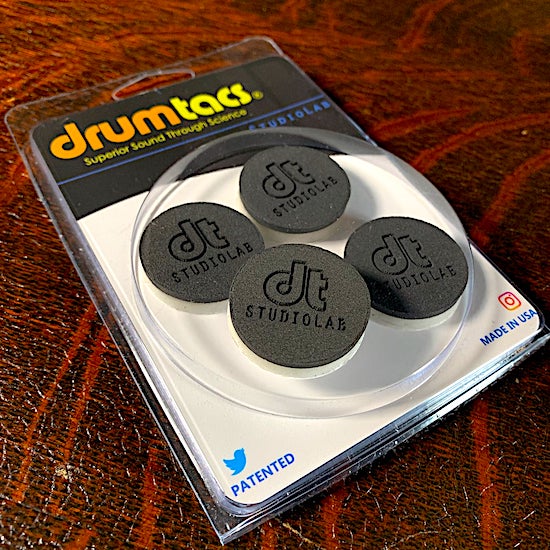 Sometimes you just have to muffle your drums, probably most often when you’re doing some recording, but it’s something we all need to do at some point.

Now, there are – and have been for a long time – many products that we use to muffle our drums, and indeed, sometimes cymbals too. Some are arguably better than others. Gaffer tape was always a classic…

Dumtacs are small sticky pads which can be used to muffle both drums and cymbals. The company says that they’re multi-use sound control devices which can be used on top heads, bottom heads and underneath cymbals (amongst many other places), and that they won’t come off even under heavy playing.

Physically, they’re about the size of a two pence piece (sorry everyone else worldwide – pick a big coin…) and are probably about 3/4 times the thickness of said coin. The soft foam is playable enough to be cut and weighty enough to provide good solid dampening.

The company says that one Drumtac placed about an inch in from the hoop will only reduce high frequency overtones whilst at the same time promote a deeper more focused sound with better response and attack. On a cymbal, it says one Drumtac will slightly darken and mellow the cymbals tone.

In the video, I specifically used a deep, ringy drum with lots of overtones.

As you’ll hear, the result on a snare drum is clear; one Drumtac takes the edge off the ring without killing it. Two Drumtacs take it to what I thought was a nice useable place and three kind of left me wanting to do 70’s cover tunes. I didn’t bother going any further into the head because the results were already apparent.

On the floor tom, I was just looking to tighten up the sound more than anything.

With one Drumtac on the top head, I noticed a slight reduction (through headphones) in the overall ring. With one each on the top and bottom heads – again through headphones – that reduction was there but arguably slight, but this may have been because of the clear top/coated bottom head combination which already gives a pretty dry sound. I think if you’re looking for a real heavy reduction, then you’d need to go further into the head and use maybe two or three Drumtacs equally spaced around the head.

On the ride cymbal, for extreme examples, I tried one Drumtac on the bell (on top just so it could be seen, normally it would be underneath; I did try both anyway and I didn’t notice any differences top or bottom here) and one midway across the bow.

The result on the bell was subtle sound-wise but you could definitely feel a difference. Further down the bow, well, you can hear that change clearly enough for yourselves. There’s no way in reality you’d muffle a cymbal there for either sound or playability, but it’s an interesting feel all the same and somewhere between midway and the bell would probably work nicely.

Anyway, I don’t generally use a lot of muffling myself, but I found that these do work as described and have a nice clean look to them. When fresh, or freshly cleaned, I had no problem with their adhesiveness. The fact they can also be used on cymbals and are reusable (simply by washing them off under the tap) is cool too.