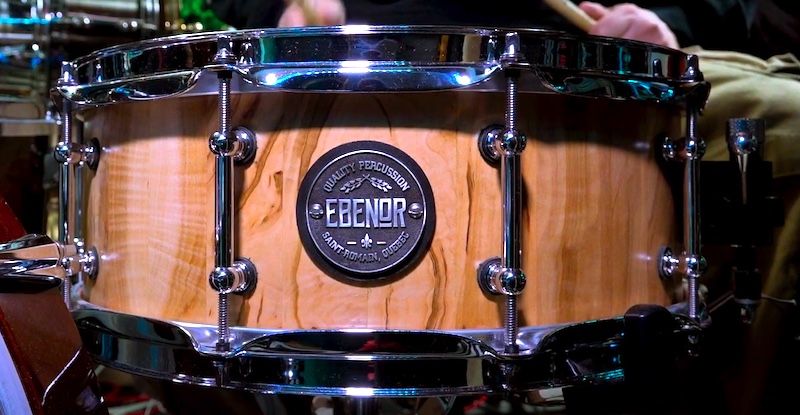 Actually, it wasn’t just me that he introduced to Ebenor that day, it was a whole bunch of us during one of our online get togethers. The drum in question was one of the company’s copper models, but everyone kind of got a little bit excited and nerdy by what was presented. While this review drum isn’t one of Ebenor’s copper drums – which are worth checking out anyway – this is from their Applewood range.

Ebenor is a small custom company from just outside Montreal, Canada which specialises in building custom wood and metal drums, as well as doing repairs too.

The review drum is made from what Ebenor calls Applewood, which is sourced locally. It’s a 14×5.5” stave shell with sharp edges, triple flanged hoops, Trick strainer and butt plate and ten double-ended tube lugs. The drum came with Evans heads top and bottom and Puresound wires.

I think I’ve said before that I tend to judge snare drums on three things; looks, sound and feel/how they play.

Sometimes I’ve had drums that hit some spots but miss in others; they might play really well but only sound good at one tensioning, or they sound great but have disappointing hardware choices like a budget snare mechanism.

In absolutely all honestly, there isn’t one thing I didn’t like about this drum and I think it’s one of the best snare drums I’ve come across in nearly 20 years of doing this. I don’t say that lightly either.

At this point, most of the time I get gear to review and it’s like, ok, cool that’ll be fun to try. This time I was genuinely quite excited to try this drum. 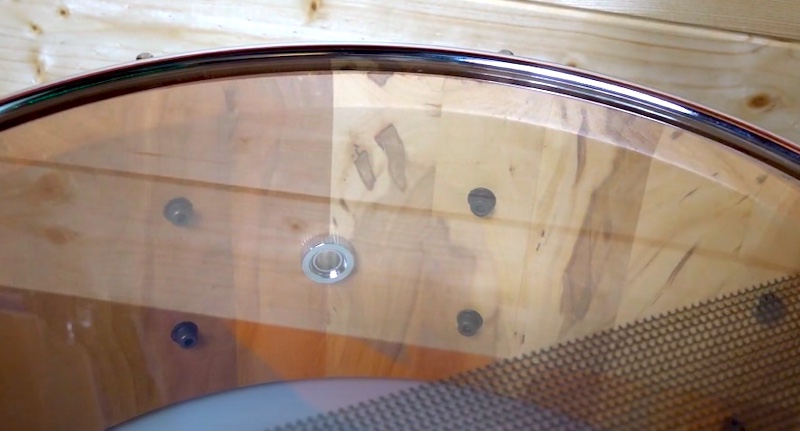 To me, it looks amazing – like a fine piece of furniture, and would probably fit in with most kits – but it’s the figuring of the wood which makes it stand out so much. It really is quite beautiful to look at, with a slight texturing to the outside of the shell.

The drum plays very well with a wide tuning range. Although I only did three tensionings in the video, I did take it right up and down in my testing and the only time it sounded less than exceptional was when it was at finger tight. At that point it had a big wet sound but kind of lost its feel a bit, but then again, I wouldn’t expect a 5.5” drum to do much else tuned that low. It also had plenty of projection and voice. Best of all for me though was the wonderful inherent ring it has which is both smooth and consistent throughout the tunings.

Plus, it’s very well made and has loads of mojo/vibe/whatever-you-want-to-call-it. It’s easily as good as any of the major players around which isn’t something you can say about every small builder. Even the badge is pretty cool looking.

This is a high end drum but it doesn’t have – comparatively speaking – a high end price.

It’s not cheap, but they are plenty of production line companies offering drums for more. For what you get, I personally think it’s both great value and a worthwhile investment. The only trouble you might find, and I’m not hyping this up because I find myself in exactly this position, is which one of Ebenor’s drums you’d want first.

This brand is going to be big, mark my words…

For more info, go to https://www.ebenorpercussion.com

If you’re in the UK, you can contact Matt at Ebenor UK via Instagram at ebenor_drums_uk to speak about the drums.