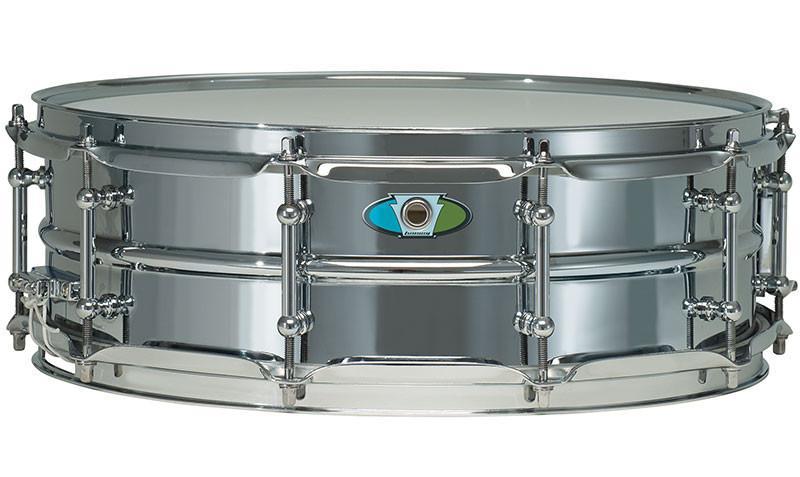 So, these have been out for ages now but since this particular drum is a little more unusual I thought I would take a look at it.

For those unfamiliar, the Supralite series of snare drums are made from a 1mm beaded steel shell which Ludwig says was designed for a bright cutting attack with wide mid range overtones.

They all have chromed brass hardware and 2.3mm triple-flanged hoops with a slightly different (to the more regular higher-end drums) redesigned blue and olive badge. These are Chinese made drums which is why they are priced as they are.

The one thing that I thought was – I’m not sure whether I’d say stingy or disappointing – was the choice of batter heads. The drum came with a generic coated head, which I immediately swapped out for an Evans coated G1. Taking into account these days you can buy cheaper drums with branded heads top and bottom, it’s probably not unreasonable to expect at least a branded batter head, if not a bottom head as well on a [around] £200 drum. Never mind…

All that aside though, I was really surprised just how good this drum sounded and played. I liked it.

I really enjoyed all three tensions in the video and was surprised at the great tone the drum had, given that it’s not exactly expensive. The build quality was about what I would expect given its nature and the general retail price, and I have to say that I liked the inclusion of the tube lugs and 2.3mm hoops against the 1.6mm version you often get at this price level.

All in all though, if you want a potentially multipurpose snare – ok, maybe not this specific size but perhaps one of the several other sizes in the line – then the Supralite models might be worth checking out if you haven’t already. Yes, they are at the lower end of the scale but certainly feel and sound-wise they’re more pro level to my mind.