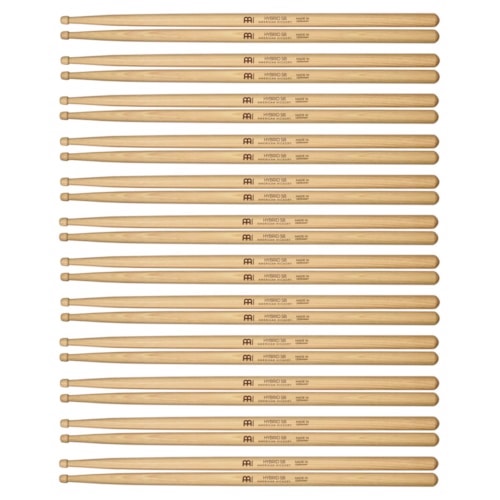 Meinl makes drumsticks, did you know that?

Ok, if you’ve been paying attention you should have known that because I actually reviewed a few pairs back in 2019, but it seems to me that whilst there are obviously the big name players in the stick game, Meinl doesn’t necessarily spring to mind when it comes to the subject, at the moment.

As I mentioned, I’ve reviewed some Meinl sticks before and I’m happy to say again that I liked them. To be truthful, I liked them a lot as it goes, so I was really pleased to try some more.

The sticks we were sent were Hard Maple Hybrid 7A, 8A, 5A, 9A (thickness-wise, this is between these two models at 0.58) and 5B, Hickory 8A and 9A and Signature models by Luke Holland and Calvin Rodgers.

Maple features heavily in this review batch as you’ll have seen, and this worked out well for me since I’d actually been using a pair of maple sticks in my studio for the previous few weeks and loving them.

What’s different about maple is that in terms of drumsticks it’s noticeably lighter in the hand, the tradeoff against hickory being that it’s generally not as durable in sustained heavier playing.

Meinl says this about their Hybrid sticks:

Designed for drummers playing in diverse bands and multiple situations with a wide range of musical styles and genres.

The unique tip starts as an acorn shape, which is trimmed down to the classic barrel size for a hybrid design that produces a dark and smooth articulation on cymbals. Additional length and long taper gives this stick a quick response with greater rebound for fast chops and deep grooves.

I wasn’t sure exactly what to expect from the Hybrid tip as sometimes I’ve found this type of design to be a little underwhelming. Not this time, however, as the cymbal sound was both clear and strong. Performance on the drums was also good across the spectrum of weights.

The Hybrid line also features a dual tapering; the first taper is long and gradual, which Meinl says  gives the stick more natural rebound. The second taper is short and reaches the neck diameter quickly which equips the player with more forward weight and a heavy feel.

As far as the rest of the stick goes, I really love the length of all of these sticks – which is uniformly 16.25”. They feel comfortable in my [not huge] hands and the length feels just right without being clumsy.

When I’ve chosen sticks for myself in the past, I’ve always generally stuck to the tried and tested model sizes because I’ve always found enough diversity there without the need to follow one person’s specific vision.

Having said that though, after reviewing a certain signature pair many years ago I found myself loving the design so much it became one of my all-time favourite sticks, and still is to this day. Oddly enough, the same thing happened again just a few weeks ago, and these were the maple pair I’ve recently been using at home.

The two signature designs here are for Luke Holland and Calvin Rodgers.

The Luke Holland stick’s diameter is between a 5A and a 5B, is made from hickory and has a round tip.

It’s funny, because looking at all of the review sticks when paired together, this pair seemed to me to be slightly larger than the others when actually, they’re not. On that basis, I was kind of expecting them to be a little heavier/larger for me than they turned out to be. That was a pleasant surprise to be honest. I found the sticks

to be a nice weight, with plenty of solid body to them, and the round tip provided a lot of good rebound.

Before I started the review, I probably would have said this pair – based on the visual and first impressions side of things – were likely to be be my least favourite of the bunch. It’s always nice to be educated and wrong on something…

The Calvin Rodgers model was much more my thing straight away.

It’s a medium weight stick, about the same diameter as a standard 5A but at 16.5”, it’s a touch longer. And you can notice that too, or at least, I did as soon as I picked them up. I like the extra length of the stick combined with the weight and width, and the ball tip.

In summary, all of these sticks – even the ones which were larger than I’d normal use – felt very comfortable to use, and I liked that about them. They’re very useable.

To be clear, this stick making thing isn’t a side thing from a company that is already big at other things, these are premium quality sticks for sure and I’d be very happy using any of them in my day-to-day playing. Ok, that might seem to be an odd thing to say, but that’s just based on Meinl’s fairly recent re-entry into the stick making world and not having as much of a name as some of the others with longer pedigrees.

The thing that struck me most about the last batch of Meinl sticks I tried was that they just looked premium; you know, obviously quality lumber before you even pick up a pair, and this is the same again now.

It might sound strange, or it might just be me, but I think these sticks look like they’ll take care of you before you even pick them up, in the same way you almost feel ‘safe’ when you’re playing a great quality or special snare drum.

That’s another thumbs up from me.