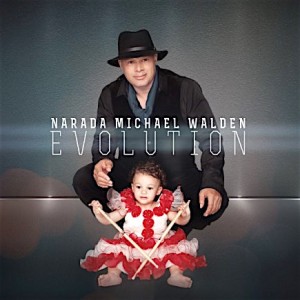 If you’re not familiar with Narada then you should be! He’s played some very high profile gigs in the past including replacing Billy Cobham with Mahavishnu Orchestra.

Now he writes and produces a lot of his own music and this is one such album.

I’ve been listening to this record for a little while and from the very start there’s something endearing about it.

It might be the fact he has his little girl Kelly on the opening track and the fact the artwork is simple and composed mainly of photographs of his family, or possibly the general uplifting vibe of the entire record. I can’t quite put my finger on it.

There are a total of 13 tracks on the album and if you’re a fan of RnB, funk and a little bit of a Latin vibe, you’ll probably enjoy this.

There are some great vocal harmonies, “Song for You” in particular jumped out for me on that front and “In The Sixties Now” definitely catches the sound of the era whilst remaining in keeping with the rest of the record.

Some of the tracks have a bit more of a dance edge to them, which tellingly doesn’t clash with the rest of the record.

From a playing perspective, the kits and electronic sounds works well, and Narada’s playing is tight and in the pocket. Narada clearly approaches playing the drums from a songwriters perspective, rather than writing a song from a drummers perspective.

For me the track “Heaven’s in My Heart” was a favourite, the drums and bass have a great driving vibe to them.

The other musicians also deserve a note of recognition, including some tasteful keys by Frank “Killer Bee” Martin on “Me and My Girl”.

It’s clearly one of those records that has an especially deep meaning for the person/people behind it and it’s enjoyable to listen to, you can really connect with the feeling and emotion behind it. 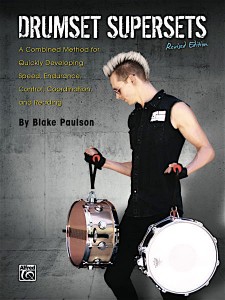 Sometimes you see something and just think “why?”

That was my initial response to the cover of this book featuring a blonde-haired chap doing bicep curls with two snare drums on handles from the local gym’s cable machine.

Wondering who it was, my curiosity got the better of me and I checked out his website only to discover that said model is in fact A BASSIST!? That said, his credentials are impressive, so we’ll give him a pass.

On to the content of the book and what we have here is in fact a well thought out system for developing control over the drums.

As much as the phrase “music is not a sport” gets banded around, the basic concept of developing control on the drums is exactly the same as that of building muscle by working out, so actually I quite like the premise.

The book works on the idea that combining exercises is both more difficult and more efficient than working one limb or idea at a time and therefore great strides in control, co-ordination and reading can be made by working on exercises that engage these areas.

Divided into two parts; the first is looking at ideas for straight rhythms based around 8th notes, 16th notes and so, the second half looks at compound time signatures and working in three; so time signatures such as 12/8.

Each section is also divided into ostinato ideas which engage three of your limbs and then a reading section which you play on the remaining limb (either snare or bass drum).

The reading may be challenging at times if you’re new to reading, but no matter your level of ability you can pick this up and get stuck in and improve that along the way. There are also a total of 20 pages of single line reading material, so more than enough to keep you busy.

The addition of counting different subdivisions adds a further coordination challenge as you progress and if you’ve worked on Gary Chesters’ The New Breed then this is a concept you’ll already be familiar with.

It’s a decent book and in fact one I quite like (despite my jesting at the cover). Given how cheap it is online, it’s worth picking up for something fresh to work from. 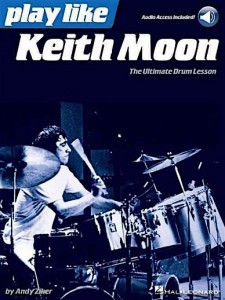 There’s no chance of being confused over the material in this book!

Written by US drummer and educator Andy Ziker; this is an homage to the one and only Keith Moon, chock full of ideas from his playing with The Who.

Coming with a download code to access the audio files, it is clearly aimed squarely at Keith Moon fans but it is actually a book that anyone could get some fun ideas from.

The book contains many examples of Keith’s playing from songs including ‘Who Are You’ and ‘Substitute’, but it goes beyond that, as it looks at the ideas behind his playing.

For example, there are many quotes from Keith in the book such as one that references how he played riffs on the drums, like guitars rather than approaching the drums the way most drummers do.

It’s one if his defining characteristics and one reason his drumming has stood out to this day as innovative, creative and enjoyable.

Andy has done a great job of selecting the ideas in this book from the vast array of music Keith recorded with The Who and equally so on his breakdowns of the ideas.

On top of breaking down elements of Keith’s’ playing from 10 songs, there are full transcriptions of a further five songs; including Pinball Wizard and Won’t Get Fooled Again.

There are full length examples of the five main songs in this release, but unfortunately not a simple play along backing track for them. I appreciate sometimes copyright can be an issue, but the lack of a simple backing track is a shame as other wise this is a great release and a must have for fans of The Who and Keith Moon.