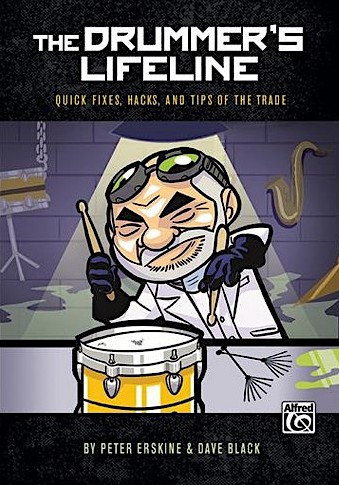 This little book is one for the tour bus, or a train journey, or just anywhere you may have a few minutes to kill (you can use your imagination).

Absolutely chock full of little tips, this book contains over 80 ideas that will help you address everything from what sticks to choose and how to play cymbal rolls perfectly, through to navigating complicated chart sections more effortlessly.

The layout is simple and effective, suggesting a “challenge” that you might have come across as a player and then picking the brains of Peter and Dave for tricks of the trade that will help.

One section I felt was invaluable was the section on the Music Business.

In the competitive and highly pressured modern music industry, there are a few golden nuggets in this section that might just help you iron out an issue with things like fees or even how to handle a bass player who can never quite hit the beat.

I enjoyed reading it and although some of these ideas I had picked up on already in my somewhat underwhelming musical career, others were like being hit between the eyes with a 2B stick. It’s amazing how rather simple ideas that you would perhaps never have thought of yourself pop up throughout.

There are also some lovely little anecdotal comments, talking about drummers such as Tony Williams and his ride cymbal for example.

You could summarise this book as many years of professional experience distilled into one pocket sized life saver, or as they have, “The Drummers Lifeline”. Get a copy, you’ll not regret it! 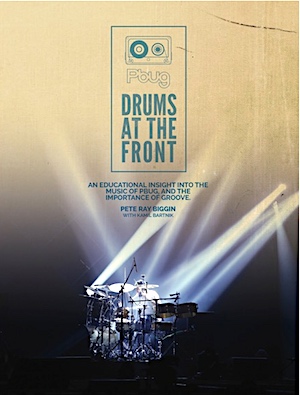 Going back some I reviewed Pete’s PB Underground release Stand Up. Then about a year ago I caught them live at Ronnie Scottsin London where they took the roof off with some great tracks and of course, some killer drumming.

If you don’t know Pete, artists he’s played with include Amy Winehouse, Mark Ronson and Level 42, with PBug being his own original project.

Drums at the Front is essentially the Stand Up album transcribed meticulously by Kamil Bartnik who I feel deserves a special mention in this review. It also comes with high quality play along tracks as a download.

If you have ever transcribed a song you know how time consuming it is and how much effort is required. When you consider there are 11 tracks you can begin to appreciate just how much time and effort Kamil must have put into transcribing it, but in fact all 11 songs have a total of THREE fully notated charts; beginner, intermediate and advanced for each. That’s 33 charts in all.

The beginner charts have been simplified to the basic form, around the level of grade 3/4, intermediate includes a couple of the more challenging aspects (about grade 6) and the advanced charts are note for note transcriptions of what Pete played on the record (think grade 8).

I like this approach as it brings all the songs down to a level that most drummers will be able to access, but also allows the advanced player an opportunity to pick apart some of the more exciting fills and ideas that Pete plays.

The music itself is nicely presented and therefore easy to follow and each song also has a little intro from Pete about the writing and recording of the track, the guest musicians/vocalists and so on.

It’s a quality production and also comes with a couple of bonus tracks, although these aren’t included as charts.

If you like funky music and R’n’B, maybe you just fancy some new material to practise your sight-reading, this is worth checking out.

At a penny under £27 it isn’t the cheapest play along out there, but it’s a weighty book and with all the download tracks and the multiple charts, actually I think it’s fair value. 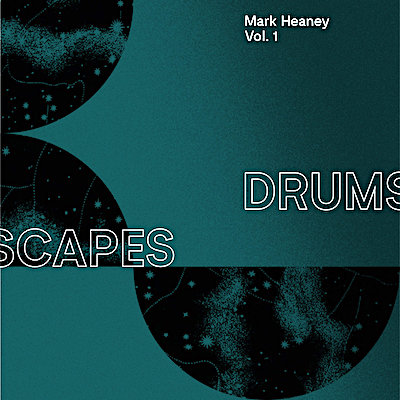 I remember the first time I reviewed one of Mark’s albums. It was an instant pleasure as the ambient sounds and intricate drums tickled my little ears. Having spent the last month or so listening to the new album, I’m pleased to say it’s just as enjoyable!

If you don’t know Mark, he might best be described as a composer who’s main instrument is the drums, rather than simply a drummer. This album is a combination of both his heavily jazz influenced playing and composition within the context of electronic music.

The album begins with some ambient sounds and drum and bass grooves, continuing with interesting melodic ideas and loops and grooves that combined, wouldn’t sound amiss on a sound track to a science fiction movie or video game (think Blade Runner or Mass Effect).

It is always tricky to know how to review an album like this, but for a drumming publication it always makes sense to focus a little more on that element of the record, and Mark’s playing on this release is fantastic!

You can hear in the form of the soloing and the tuning of his drums that jazz drumming is heavily a part of Mark’s background and in some ways this could be considered almost a 21st century electronic offshoot of jazz music.

Because of the nature of the music, the drums themselves really need to have an almost electronic quality to them, in as much as how they are played.

There is a precision and repetition, which are key elements to making it all work, but you can really hear the acoustic and organic nature of Marks’ playing meshing with the electronic elements perfectly.

It’s no mean feat to write and produce a record by yourself and to create something so tailored to what you as a player enjoy playing must be in itself a huge reward.

If you want to hear something truly different and also hugely impressive, I’d recommend you check this out.