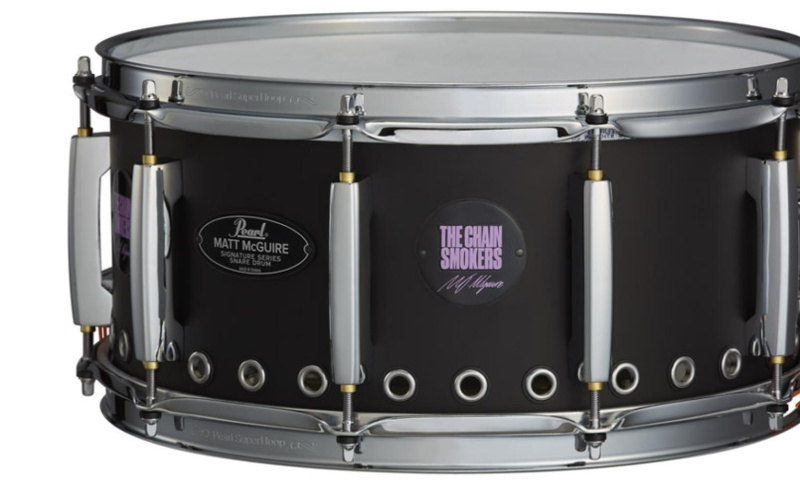 Ok, two things I’m going to say at the top of this review, both of which are absolutely true.

Number one; I have no idea who Matt McGuire is and I’ve never heard his band, The Chainsmokers. Number two; from experience, I’m not the biggest fan of steel snare drums, and this is a steel snare drum.

But… I have a reason for mentioning the above, and it’s this:

As I’ve never heard anything by The Chainsmokers, I thought it might be entertaining to try and work out what type of music they make just from this snare drum and then go away and listen to some of it and see how close I got.

I promise, I won’t go back and change anything after it’s written if I got it wrong. 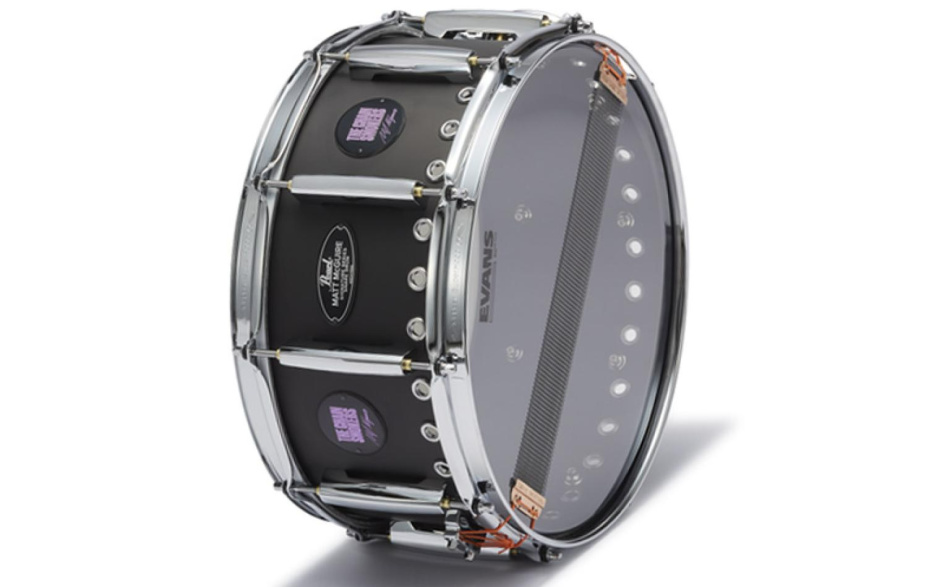 Now, the drum itself is a 1mm thick steel shelled affair, with 30 reinforced vents around the lower part of the shell. It has 2.3mm Super Hoops, single ‘bridge-type’ lugs with an Evans Power Center batter and a 300 snare side bottom head.

The drum also has an NFC decal which can be stuck to it that opens up a whole world full of extras.

So, playing the drum.

Like I said, I’m not the biggest fan of steel drums as a whole and that’s simply because I sometimes find them a little too weak and unfulfilling sound-wise. That said, one of my personal favourite metal drums is actually steel.

From playing it, the drum in question is obviously designed to be played hard and loud. Emphasis on the loud bit. I felt that the drum really demanded to be played at a certain intensity and energy level. I’d say this is kind of a ‘big venue’ type drum.

Having played it for a few hours in a relatively loud band, I can say it cuts through with ease.

It was easy to tune, with the higher tensioning producing a good clear, crisp sound that was still thick as well. This is where I find some steel drums can top-out a bit and this didn’t, so I liked that. The drum can also do medium and low convincingly too, so it seems well rounded in that regard.

The sound the drum produces is full, and has a consistent and pleasant tone to it, again, something I’ve found some steel drums to lack.

It feels very solid under the stick, decisively solid to be honest. It can do more subtle too, but I don’t think that’s the point here. Hard and loud, with rimshots, but also with overall flexibility, seems more what this drum is about.

They say black goes with everything, and this certainly does; I guess black and chrome on a snare drum does have a fairly classic look thing going for it, and I thought it looked nice.

And then there’s the obvious visual and ‘smart’ aspect. Lots of vents isn’t a new thing. There’s the obvious side to this, and then there’s the practical element too. I’ve not played too many snare drums with more than the standard amount air vents, but the size or number of the vents does in my experience generally make a difference in how the drum feels. In this case, I didn’t feel too much of a difference, but it was there and I put that down to the placement of the vents themselves – near the bottom head – as opposed to in the centre of the shell.

To be honest though, the smart aspect and all the vents aren’t really my thing. I think I’m probably too old and don’t get it in that respect, which also probably means the target demographic will love it. Then again, it’s not my name on the drum either, so that doesn’t matter.

My own irrelevant musings aside though, I loved the fact the drum comes gig-ready out of the box with Evans heads top and bottom, and that it just feels so very solid to play. In that respect, I’m totally convinced.

It’s a nice drum. I personally think it would be quite musically versatile, although I’d definitely recommend it if you’re looking for a good ‘rock’ drum capable of some power and volume. 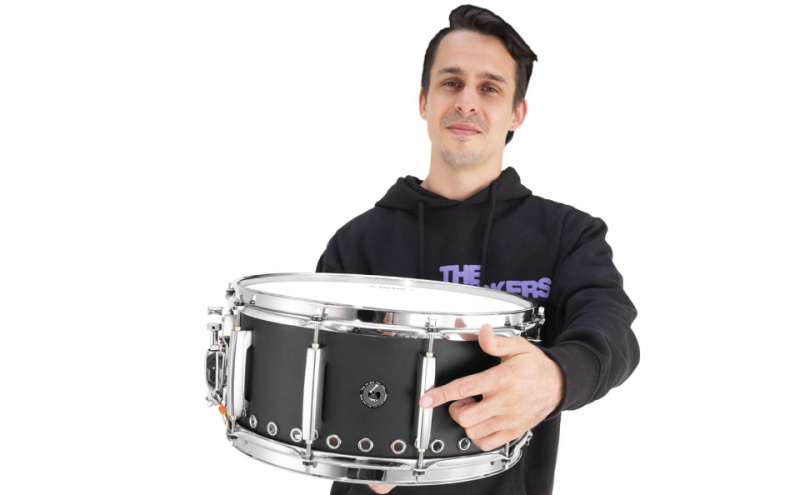 (I’ve now watched the band and Matt play by himself on his own Youtube channel. Admittedly, while some of it wasn’t quite what I was expecting, the power and energy aspect certainly was, as well as the hitting drums quite hard bit. I’ll take that as a small sign I wasn’t too far off with my guess.)