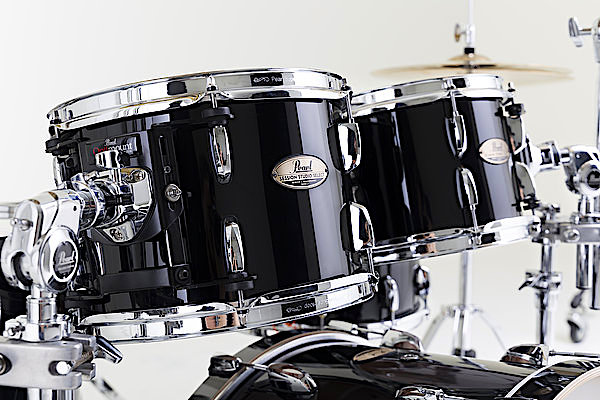 The new Session Studio Select kit from Pearl sits between its Masters Maple Complete and Crystal Beat lines, with the line itself replacing the older Session Studio Classic.

The Session Studio Select line as a whole features a combination of 6 ply 5.4mm Birch and African Mahogany shells, 60’ bearing edges, 2.3mm Super Hoops on the snare and toms (matching hoops on the kick), OptiMounts on the two mounted toms and chrome hardware.

The line comes in three finishes, Gloss Barnwood Brown, Piano Black and Nicotine White Marine Pearl and in four configurations. You can find these on the link below. While I haven’t seen the other two finishes in person, I have to say that, to me, all three look to present different characters (studio, live and vintage) and I like that.

To tune and play, the kit was a delight. The snare was crispy, the toms were both full and quite fat – despite their small sizes – and the kick drum, even though it was only 14” deep, had plenty of noticeable low end.

Overall, I really enjoyed these drums over the few weeks I had them.

That said, I’m also genuinely torn with this kit too. Not because I don’t think it’s great value and quality, I do, but because the only thing for me that immediately defines this kit as anything other than reasonably high end is the inclusion of the Remo UT heads (which are non-US made). I can’t help thinking they’re possibly not as good as the kit might deserve.

Don’t get me wrong, I think the kit sounds great with the supplied heads, which is in itself a very pleasant surprise. I thought the inclusion of Pinstripes particularly was a nice touch as the toms give a good thick and full sound.

However, the inclusion of these heads rather than some straight up US-made Remos is for me almost like Bugatti building a hyper car and then putting in a plastic dashboard. Yes, in practice it’ll do the same thing as the sleek wooden dash, but when you’ve gone that far already with cool features, why leave it there? Just a thought…

It’s not a dig at Pearl, others do it too. But, as a consumer, I do think that over a certain price point the potential buyer is already at that level where they want a ’step-up’ kit because both their playing and ear warrants that. I know from experience that buying similar level kits in very similar price ranges/levels, the first thing I did was buy new heads with it.

As I said, and regardless of the above, I think the kit sounds great out of the box. It also looked cool in the black finish. The only thing I did to possibly enhance the sound of the drums in the recording was to put a Solomon sub mic under the floor tom just to bring out some of the low end that the overheads wouldn’t pick up.

All in all though, what I’ll say in summary is that this kit is ready to go from the off and you won’t be disappointed if you pick one up.

For me, it’s a winner all round.