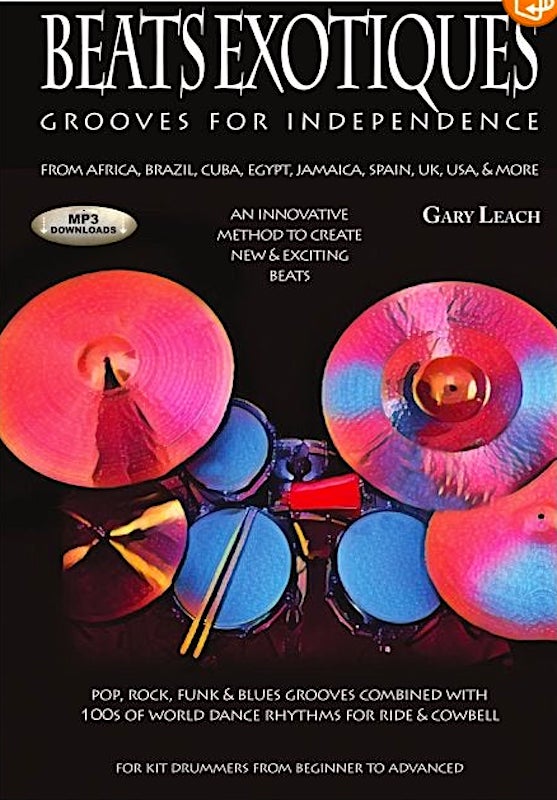 If you’ve ever sat down and tried to play some latin rhythms, or have worked through books of Afro-Cuban or Brazilian ideas and thought to yourself “this is cool and everything, but when am I really going to use it?”, then perhaps Gary Leach has written the perfect book for you.

Essentially the idea behind Beats Exotiques is to combine the usual phrasings we have in Western music, with many of the interesting, authentic and challenging styles from around the globe.

As a concept it’s fairly straight forward, the left hand pages show basic groove ideas between bass drum, hi-hat foot and snare drum, while on the right hand page is a selection of rhythms taken from genre’s of music you might hear in Africa or the Caribbean and so on

The result is, according to Gary, over 10,500 groove combinations and combine everything from Rock and Blues through to Bossa-Nova, Samba, Mambo and then styles that I suspect many of us have never heard of!

If you head over to the website there is a downloads page where you can download each and every idea in the book, or purchase a disc with everything on it. I would have liked to see that included with the book, but there is the option to listen online to the files and given how many examples there, that is a sizeable amount of audio, not to mention work and back end infrastructure to run and maintain.

There is a fair bit of introductory pre-amble in this book which looks a little daunting when you first pick it up, but it serves to explain the concept of the book and how to approach it with tips on getting the best sounds from your percussive instruments (cowbells, blocks etc) and how to approach the counting and co-ordination issues.

One nice touch is the box notation and shading key. If you imagine a rectangular bar under the written music bar, divide it into equal pieces representing each beat and then shade it dependant on how that note should be played; lightly, accented, a lower note and so on.

If you’ve done any study into world music you’ll know how important the feel is and this helps to bring some of that authenticity into an environment that I imagine some purists would raise an eyebrow at. Although, as Gary says right at the outset; these are not simply a list of grooves from around the globe, but are rather elements of them combined with Western grooves to create something interesting and new.

Once you get into the exercises, it’s actually a rather easy going book which will throw up some incredibly enjoyable co-ordination challenges but at the same time see you stumble over a tonne of fun and interesting groove ideas.

Towards the end of the book there is a section that is inspired by bell patterns in pop and rock music; all of which Gary has taken the time to isolate and transcribe. It’s a fantastic collection of ideas with everything from the iconic parts in the Stones Honkey Tonk Womanand Marvin Gaye’s Got to Give it Upthrough to tracks from the Beastie Boys and Daft Punk. It serves to show just how many of the ideas from earlier on in the book could make that crossover into the Western music scene.

It’s a big, thick, spiral bound book but it’s also the kind you could have on the side and dip into here and there to mix up your practise. In fact, that’s how I’m going to be using it! 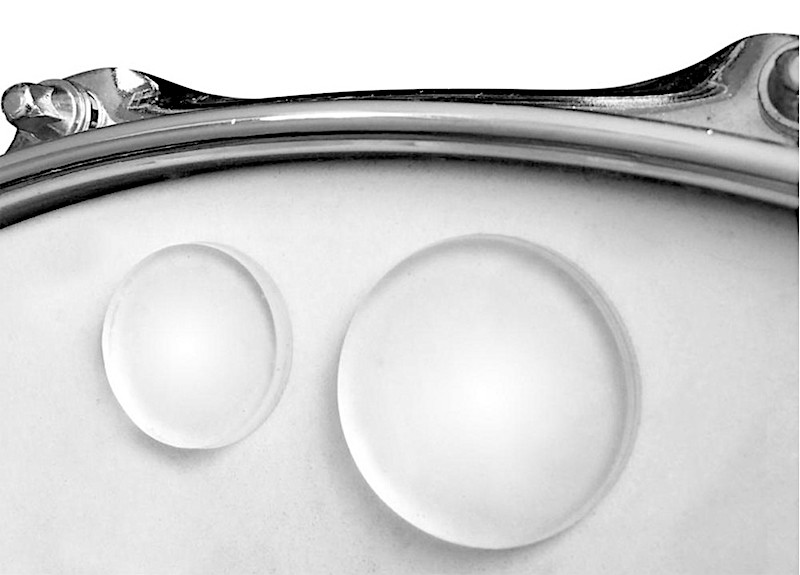 Entering the market for dampening drums is a new product from TruTones, with a standard packet containing a total of ten dampeners in two sizes (six small and four large).

The dampers are advertised as being ‘naturally tacky’, although having used them I’d go as far as to say ‘really bloomin’ sticky, but in a good way’; as in they won’t fall off or jump around unnecessarily!

A welcome surprise is that they don’t have that oily feeling some other products do and all the sticky stays on the damper. They also stick fast to your drum heads and that makes them pretty decent for resonant heads as well. Somewhere most dampeners tend to fail and fall off.

When it comes to removing them from the head, they are removable and designed to pull off fairly easily without leaving much, if any residue behind. 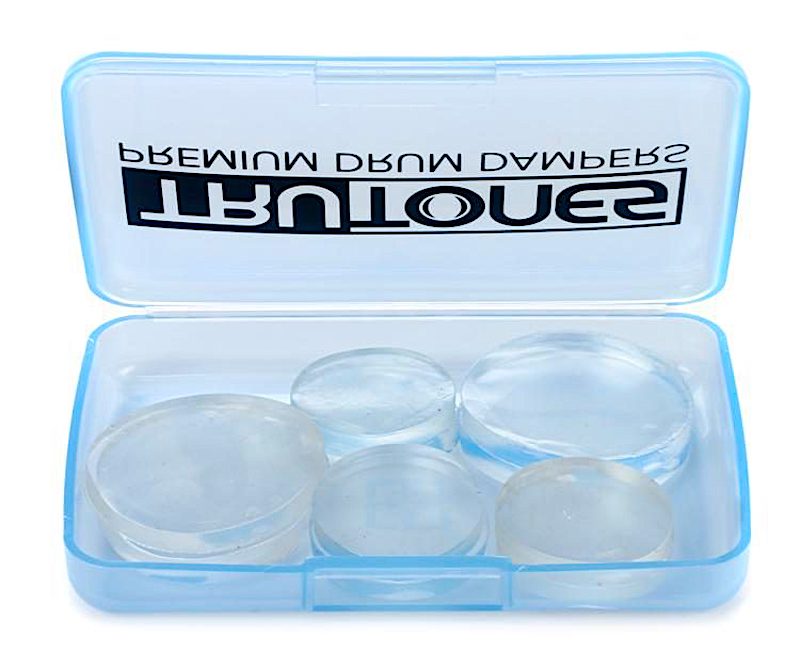 They come in a nice plastic case, something big enough to keep them stacked only two high (fat globulous mass of gels anyone?) but not line enough to not be in the way.

On the drums I also found the two sizes helpful, it just allows for different amounts of dampening without over doing it or having to cut one in half! They also didn’t choke the drum, just took off some of the unwanted overtones.

As for how long they’ll last, without having them in the stick bag for a year it’s hard to say but since August, with moderate use (not every day gigging) so far, so good!

Turn the Beat Around – Paul Wertico 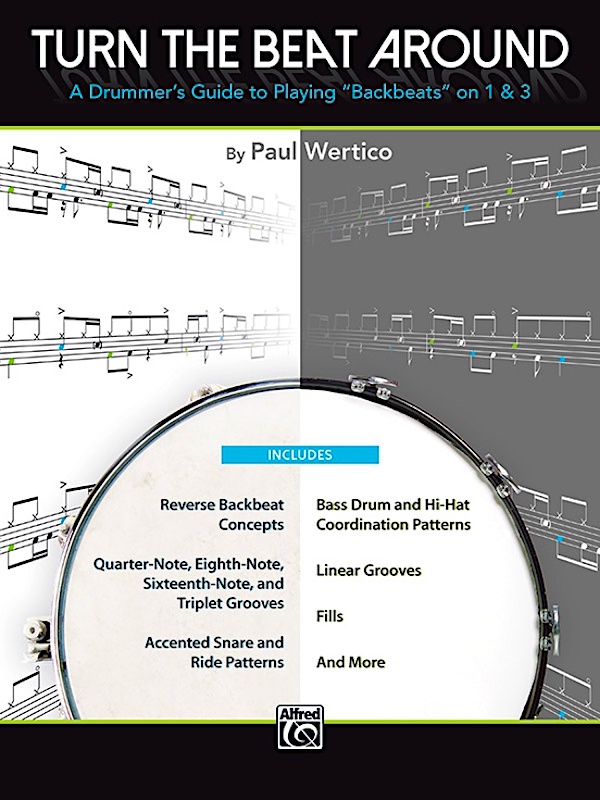 Having only recently said goodbye to Ginger Baker, it’s poignant that this book features a fantastic story about Ginger during his Cream days in the books introduction.

Without spoiling it too much for you, it tells the story of the groove that became integral as part of the song Sunshine of Your Love.

If you can now hear that iconic drum part, you’ll have a bit of an ideas as to where Paul Wertico is headed with this book.

Incredibly easy to get into, this book is all about moving the backbeat from the 2 and 4 and popping them, just for a bit of variety, onto beats 1 and 3. They’re also great as little one bar warm up and coordination exercises!

This obviously creates some interesting ideas and also brings up it’s own challenges which this book aims to present to you for in a logical, accessible manner.

Sections include different combinations of notes as both groove ideas under the main concept of playing the 1 and 3 as a backbeat alongside different ride and hat patterns.

There is a great section towards the end on linear drumming in this vein and also on something which is rather key, playing the back beat on the 1 and 3 and making the transition to a standard 2 and 4.

Fills also get a look in the final chapter, which if you’re playing a monster fill during beat number 4 can lead to an interesting transition into the backbeat on 1.

A fairly simple concept but very well presented by Paul and Alfred Music.