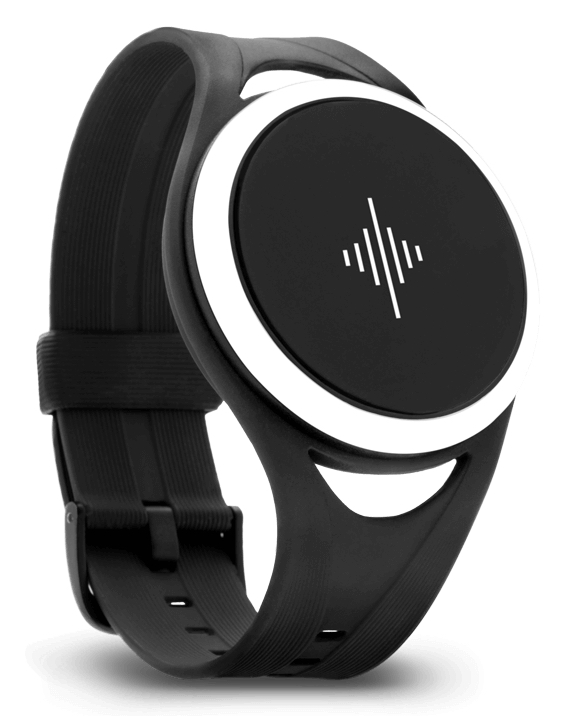 It’s a wonderful old thing the metronome and we’ve come a long way from the weighted spring loaded metronomes that used to sit a top the piano.

In all that time, the concept of a metronome hasn’t really changed. Sure, we now have metronomes that can play polyrhythms, programme playlists and can change time signature at a touch, but they are all still a the base level an external sound source to help us keep time.

The Soundbrenner Pulse is a little different, a metronome that is not an external sound source but a kinetic one that you feel throughout your body. It’s a bit like taking the butt kicker throne concept and applying it to time keeping rather than feeling the bass drum.

The Soundbrenner Pulse can be worn like a watch on the wrist, used on a longer strap around the leg or arm or if you want to, around your core (where they claim it’s best placed) using a chest strap.

The device itself is a little larger than a standard wrist watch, it turns on with a twist of the outer dial (also used to adjust tempo) followed by a long “tap and hold”. The same process turns it off. You can start the metronome with a couple of taps, and three at a steady pace will set a tempo.

I did find it struggled on occasion to distinguish between the different number of taps when you get further up tempo, but again, you can turn the dial or use the app for more control.

The accompanying mobile app is available on Android and iOS as a free download, you don’t even need to own a Soundbrenner device to use it as a simple metronome, but it has of course been designed to work with the Pulse and other future devices and allows for full customisation.

Pairing the device with your phone is an easy enough process, using bluetooth in the same way as many speakers and headphones etc and once the initial pairing has been set up, it’s one touch connection.

Although the functionality of the app is impressive, there are a couple of bugs that still need to be worked out, for example when trying to access the “Library” or “Load” options from the main screen (on iOS at least) it crashed every time. One feature I badly want to use is to be able to programme a set list for gigs, which I assume is inside one of those two options.

From the app you can control a number of settings; tempo, as you would expect, is but one of them. You can tap a tempo on your phone screen, adjusting subdivision note values and so on. You can also adjust the physical vibrations from the device, customising each beat within the pulse to your preference and making them harder or softer, shorter or longer. There is even a specific pattern of three notes which is handy for distinguishing where you are in the count, for example beat one could be a hard three beat pulse with short softer pulses for the remaining beats.

The same is true for colours, enabling you to set a different colour for each beat and the device flashing with the corresponding colour as it vibrates. 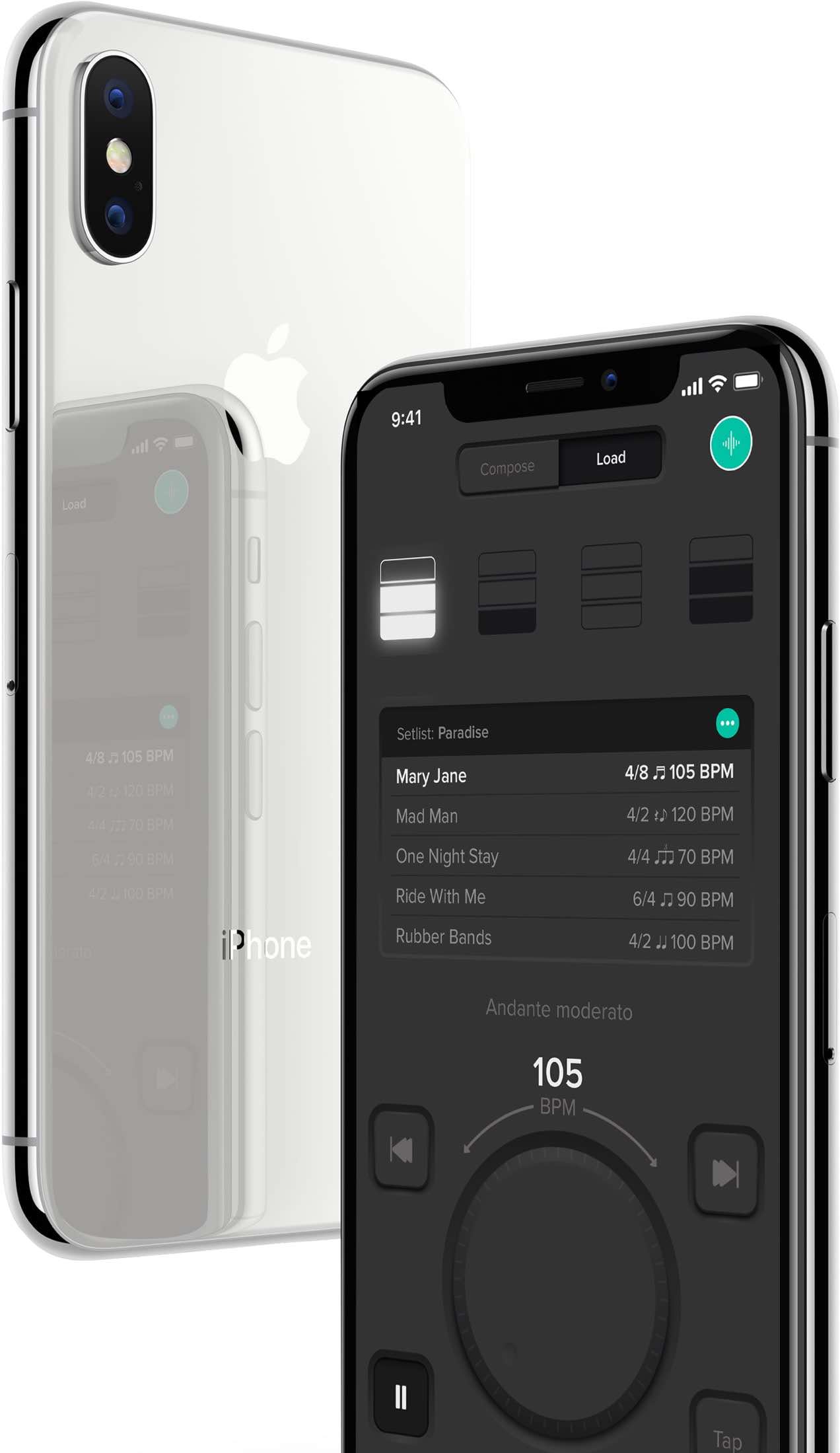 The app also has a number of other options including links to the Soundbrenner shop and how to videos, support and so on.

So far so good, but the device really comes into it’s own when you connect it to your computer…

Synchronisation and computers are a huge deal now in the live music setting, with more and more drummers using programmes such as Ableton Live to control not just backing tracks, but individual samples, live loops, lighting and visuals.

The Soundbrenner app comes with Ableton Link as a main setting, allowing you to link the device and Ableton with the click of a button. Open Ableton, hit “link” up the top left hand side and that’s it; assuming the mobile and the computer are on the same network, it connects just like that!

Adjust the tempo on one and it adjusts on the other and yes, it works incredibly well! There’s next to no latency and the fact it works both ways means it’s incredibly flexible too!

If you’re not on the WiFi however, maybe in a gig situation; there is another option which is a little more involved but will also work and that is to download from the Soundbrenner website/app stores a set of “DAW tools” These allow you to connect to any Digital Audio Workstation with MIDI connectivity – basically all of them.

I use a Mac and for me it was fairly simple; install the DAW Tools and connect it to the device, then in your MIDI settings select DAW Tools for output/input. It was actually fairly easy to set up and the Pulse was keeping time with my DAW (I tried it with multiple, no issues).

The other thing that is worth nothing here is that when I tried to control the metronome on the DAW from the Pulse (as I had with Ableton), that didn’t work. I think there may be workarounds for Ableton (on PC at least) should that be an essential for you.

Another nice thing here is that you can set it so that a tap on the device stops the click from the DAW, without interrupting the recording on the DAW itself.

One small hing I noticed here was that when you start the recording on then DAW occasionally the clicks are off, but you can tap it slowly twice and everything seems to be back on the beat.

Latency was around 6-13ms and didn’t really impact upon my ability to keep time (some would say more practise would be the best cure for that little ailment).

So this is all well and good, from a tech point of view it’s a cool bit of kit. The real question is now much simpler; “what is it like to play with?”

I’ve tried it in a few situations and all of the body locations.

I found for me that the place I prefer to wear it is on the upper arm. I didn’t like the wrist as when playing it was a bit heavy (I don’t normally wear a watch) and on the chest it felt to me that it wanted to sit too low. I’m sure that everyone will have a preference on this though.

Keeping time with the Pulse takes a bit of getting used to, but once I had spent some time playing with it, I actually found it was very natural. There is something about the vibration that makes it very satisfying to lock in with. Because it’s a physical sensation, it’s also a little more difficult to ignore than an external click sound.

For practise this is a great device, mainly because it’s very easy to stop and change a tempo and then carry on because you’re moving at your own pace.

In a band setting it can be quite tricky to tap on and off if you haven’t got a pre set list of tempos, and if a guitarist who’s not on a click starts off, it’s a real challenge to set that tempo post sing start without a sufficient amount of time to tap it in before actually playing yourself.

If you’re using Ableton Live in a performance setting, it’s excellent! For me I use Ableton and samples/loops with two bands and to be able to have both the audible click and then the Pulse as well is very cool.

I haven’t really tried it in a recording environment, I assume the vibrations wouldn’t make it through to the mic but it does have quite a rumble to it when on full strength, but again I imagine you’d still be on an audible metronome anyway.

Ultimately this for me really is a great bit of kit, but it’s not cheap at £90! That said, I have a standard old Tama metronome running on 9V batteries that cost me about £70. No worry of that here, the Pulse has a really well designed magnetic USB charging station.

I can see the benefits of using the Pulse in virtually all playing situations, but would I do away with an audible click when it really matters? That much I am as yet undecided on but I imagine after some more time with the Pulse, the answer may well be yes.

I must confess that I was a little bit sceptical initially, but I think from now I’ll be drumming with a Pulse on my arm.