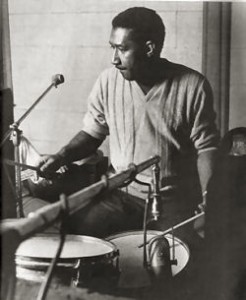 If there’s one piece of music which defines America at a certain time it’s ‘Green Onions’ – certainly as far as those of us living in the UK are concerned. Even now more than fifty years after the record came out it’s still being used to pinpoint a time and place. If a film or television programme wants to evoke America in the late fifties early sixties they use Booker T. and the MG’s instrumental record to do it. Conversely another MG’s tune defines summer in the UK. ‘Soul Limbo’ with its distinctive cowbell intro has been the evocative theme music for the BBC’s cricket coverage for a couple of generations and both tunes were co-written by the subject of this month’s Groovers and Shakers – Al Jackson Junior.

The MG at the end of the band’s name stands for Memphis Group and it’s drummer was Al Jackson junior and, even though he wasn’t exactly playing Modern Jazz on that highly successful multi-million setting tune, it was certainly ‘close enough for jazz’ as far as we ‘Baby Boomers’ cutting our teeth on American Music here in the UK were concerned. His part was so understated that just about every other drummer playing it gets it wrong! There are no fills or elaborations it’s simply ‘time’ with fours on the cymbal and 1, 2 & 3 on the bass drum and as we’ll see, Al Jackson played time better than anybody else and never ‘stepped on any cracks’! His playing was powerful, groove-orientated and deceptively simple. 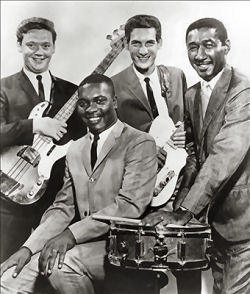 Al Jackson junior was born in Memphis on November 27th 1935 and his father (unsurprisingly Al Jackson Senior) was a swing bandleader and bass player who’d gigged with Charles Lloyd. Al junior started playing in his father’s band in 1940 at just five years old and within a very few years was according to Willie Mitchell capable of “swinging it like a pro”. As time went by he progressed first to the band trumpeter, producer and songwriter. Mitchell (who was responsible for writing ‘Soul Serenade’ among other tunes) was leading, while at the same time playing with the Ben Branch band.

Steve Cropper and Duck Dunn saw him playing many times with Willie Mitchell and Booker T. Jones at the Flamingo Room at the Manhattan Club off Beale Street and according to Duck “he had such a delayed backbeat when he came down on a beat it felt like it wasn’t going to get there. Booker T. suggested he should join Howard Grimes playing drums at Stax recording studios. The Stax studios were famously situated on McLemore Avenue, also in Memphis. Al was reticent at first because this would take him away from his regular wage-earning job at the club, but when they insisted Al gave in providing the owners guaranteed him a weekly salary. After not too many successful sessions he quickly became the main drummer and the first house musician at Stax to be allowed to do this.

Al’s idols were ‘Philly’ Jo Jones, Elvin Jones and Joe Dukes and he actually sat in with the Max Roach group. He was four or five years older than the rest of the MG’s who looked up to him and relied on him to ‘put a pocket on it’ as far as the music was concerned. This meant to find the appropriate groove to turn a good song into a great song. Al became justifiably known as “the Human Timekeeper” and went on to play on many of the world’s favourite ‘R & B’ hits. It‘s an astonishing list which encompasses all the favourites we drummers love to play although, to be honest the greater majority of us here in the UK certainly didn’t play them like Al did. For my money this trait manifests itself best on Eddie Floyd’s ‘Knock On Wood’ which no one I’ve ever heard played as sparingly as he did often with just one and four on the bass drum. I certainly couldn’t ever resist putting a fill before the pushed accents on the intro and this sacrilege would no doubt have brought a smile to our hero’s face. Also, the end of the 4 bar instrumental section simply has an understated single down-beat not the 1& everybody else plays . According to Steve Cropper, Al did have all those jazz chops in him and he saw that when he was warming-up. Apparently he played fast rolls and fills and having witnessed Al’s single stroke playing said they were the greatest he’d seen and realised that what Al Jackson played on record was just the tip of the iceberg.

One of his much copied trademarks came about by accident. He broke the batter head on his snare drum and played the offbeat for the rest of the show on a tom incorporating a rimshot at the same time to help it cut through. Drum-wise in the studio he used a completely standard Rogers kit with 20” bass, 12, 16 and occasionally 13” toms and a ‘Powertone’ wood-shelled snare. In the live situation his set of choice was evidently a round badge Gretsch with a Ludwig 400 snare drum. His Zildjian cymbals were almost standard sized with 14” hi hats, 16 crash and an 18” ride. His playing was actually characterised by the fact that he used cymbal crashes very sparingly, feeling they spoiled the arrangement and masked the music. He invariably had just two microphones on the drums (one below the hi hat) and none on the cymbals.

But it doesn’t end there, as well as the MG’s stuff he co-wrote ‘Respect’ for Aretha Franklin, ‘Let’s stay together’ and ‘I’m still in love with you’ for Al Green and played drums on ‘Walking the dog’, ‘Knock on wood’, ‘I’ve been loving you too long’, ‘Last night’, ‘Mr Pitiful’, ‘Shake’, ‘Hold on I’m coming’, ‘Dock of the bay’, ‘You’re all I need to get by’, Let’s stay together’, ‘Soul Man’, ‘Who’s making love’ and ‘Try a little tenderness’ to name but a few. 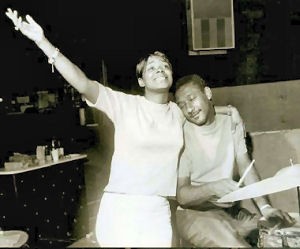 Willie Mitchell described him as “a very sensible drummer” obviously this applied to the way he played drums but may also have had something to do with the fact that he owned eight oil wells!

An Oregon drummer named Ed Pierce sums him up like this:

“Al had a simple but strong feel – clean but earthy and not overtly slick. He could ‘rock the house’ with his drumming and play a fat backbeat as well as anybody, but he also displayed a wonderfully light, nuanced touch when it was required. His influence as a drummer and also as a contributor to soul music and ‘Black Pop’ in general is probably greater (I dare say) than many imagine it to be. He definitely carved a distinctive niche for himself in the history of American music”.

Al Jackson jnr was, as far as I’ve been able to ascertain, the first drummer to be murdered (the second was the guy from ‘Die Toten Hosen’). His life was ended by an alleged acquaintance of his wife on the 1st October, 1975. He was shot six times in the back. His assailant fled and three days later was shot dead by the police after a botched bank robbery in Seattle. There’s plenty of conspiracy theory stuff about this subject on the internet for you to investigate if you’ve a mind. For me though the most important thing is that the drum world lost the drummer who played on not just mine, but every music enthusiast’s favourite records and, without a shadow of a doubt unwittingly taught me and all my contemporaries the value of ‘less is more’ in drumming. I’m sure I’m not the only player who’s still learning that lesson!

To hear the best of Al Jackson jnr listen to everything by Booker T. and the MG’s, and just about anything successful on the Stax label. Chances are it will be him.