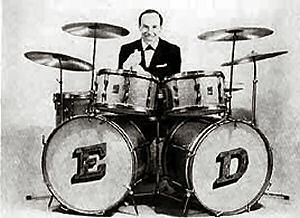 I’d interviewed Eric for Dolbear’s ‘British Drum Icons’ series, but never for ‘Groovers and Shakers’ where he absolutely belongs. So that said, allow me to introduce this month’s subject: Eric Delaney!

We actually saw more of Eric in the UK than of his arguably more illustrious American contemporaries like Krupa and Rich. We might see those guys in the cinema or occasionally at gigs, but we certainly wouldn’t see them in black and white on our TV screens.

Of course there were a great many other drummers around in those days. But when Variety ruled, you’d be hard-pushed to see them on family TV programmes like Sunday Night at the London Palladium, but you would see Eric who was Britain’s finest and most flamboyant drummer – at least until Mooney arrived on the scene some years later.

Not to beat around the bush, Eric Delaney turned everyone of my Baby Boomer generation on to the noble art of drumming, which at the time had very little to do with rock’n’roll music 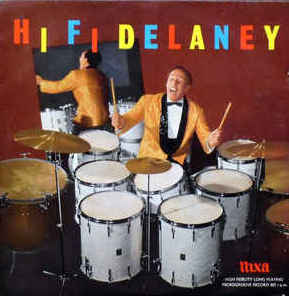 Eric was born on May 22nd 1924 in Acton, a leafy West-London suburb, and in the fifties it was almost singlehandedly Eric that turned me, and arguably every other drummer of my generation, on to the possibilities of playing the drums. He was the premier showman drummer of the time (pun intended) and if anyone was playing a flamboyant drum solo on black and white TV in the late Fifties, it was pretty much bound to be Eric.

He was often on ‘6.5 Special’ and to make things even better for us pimply teenagers, he always played not one, but two bass drums. Mounted between these bass drums were a pair of same-sized small toms – like Louie Bellson – which turned out to be regular snare drums without wires. He was invariably surrounded by percussion instruments and was absolutely the epitome of fifties cool.

He was influenced by people like Jo Jones, Big Sid Catlett (a particular favourite), Ray Bauduc, and Sonny Greer. Obviously Gene Krupa was a huge influence, and that was partly because his drum teacher, Max Abrahams, brought him the Krupa Drum Method book. Although not one to be stuck in the past, Eric admitted to me that he was also seriously impressed by Billy Cobham.

I met up with him for an interview in 2008 in London’s Soho when he was just 84 years old. He’d recently appeared, conspicuously, in Rhythm Magazine’s Top 100 Drummers chart, although strangely, he told me, nobody seemed to have bothered to tell him about his achievement! 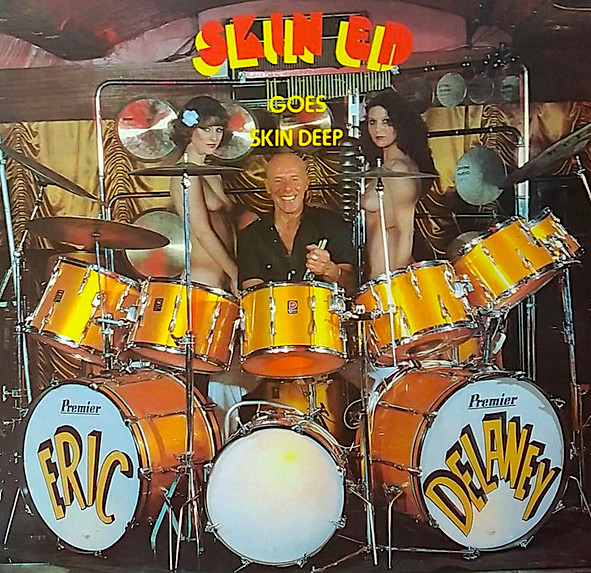 Eric seems to have started playing earlier than anyone else, having begun his career when he was 18 months old. His mother bought his first drum for sixpence from Woolworths. When he was 8, he earned money playing as a guest drummer at local hotels at gigs that his parents had arranged for him.

Eric and his dad went to a jazz club where a guy called Ray Ellington, who was The Goon Show’s drummer, was also appearing. Ray went up to his dad as Eric was playing  and he said “He’s going to be alright”. From that praise he  moved on. Like many others he progressed to lessons with Max Abrahams. He left school at 13, with his pal Hughie Green and they got into trouble because in those days you weren’t supposed to leave until you were 14. His dad put on a show where he was billed as ‘Britain’s Youngest Swing Drummer’.

The war had started by then and Eric had to do air-raid duty – sitting on top of Buckingham Palace all night – in return for cups of tea.

From his perch on the Palace he eventually found his way up to Morecambe where he saw an advert in the paper – Musicians Wanted: Drummers. This was for the Ambrose Octet with George Shearing on piano!

He was eventually called up to fight in the war, but things almost took a different turn. Eric’s dad was a squadron leader in the Air Force, and at the time was stationed in London. He realised that if Eric went on a Morse code course he could demand his son came to his squadron. This would keep him in London and able to keep on playing. 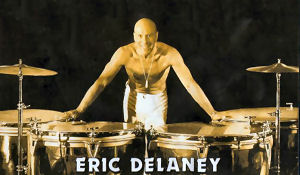 At this time it seems he was playing whatever drums he could get hold of, although his first endorsement was with Ajax and came from Boosey and Hawkes. Sam Norton was the man there at the time and he used to bug everybody to play his stuff, which guys like me and Jack Parnell did of course.

Eric ended up being posted to India, and he arrived at Bombay in a big convoy – he confessed it was a frightening experience. The pictures we see on television are all miserable and that’s just how it was – ships everywhere, and submarine attacks too. Eventually they arrived in Bombay and soon after Eric went into the cookhouse and spotted a notice: ‘Artists and Musicians wanted’, for a road-show. He applied and 10 minutes later found himself posted to Ceylon.

He returned from the Orient in 1947 and told me he played in Blackpool for the whole summer season. He used to go to the bank to pay in their cheques – he not only got paid for the week; he got paid for every broadcast. As he said, he earned so much money it was unbelievable.

Soon after making a name for himself, Cyril Stapleton and the BBC Band offered him work, after which he joined the Squadronnaires. He met up with the ‘Squads’ when Jock Cummins was on drums. Jock was fed up with touring and Eric had had enough of being in the studios – perfect timing!

During the ’50’s with the Eric Delaney Big Band he specialised in Variety shows, and every week he had a different place to gig. He did so much work, and he was topping bills at the time which was seen to be the pinnacle of showmanship. However, the famous bandleader Billy Cotton once gave Eric some conflicting advice once when he told him; 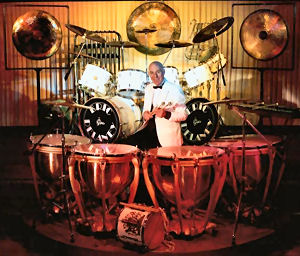 “Never be top of the bill, if there’s a seat empty, it’s your fault!”

Eric started playing a double bass drum set after he saw Louie using a couple, so he copied him. However, Eric’s both had the same diameter, whereas Louie had one large one and one slightly smaller.

Of course everything changed big time in the late fifties when rock’n’roll started, which was a dirty word for jazz guys like Eric at the beginning.

As Eric recounted, “We were in Glasgow at the time and we were top of the bill at The Empire. Down the road in a few days time was this Bill Haley and the Comets, and people were sleeping on the pavement round by our theatre to get tickets. Of course we knew what had happened and I turned around to the boys the next week in the band and said: “I think this is it fellas” and it was then that I started getting ideas about a small band.”

And that was how it happened, almost overnight. 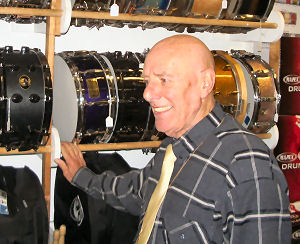 Eventually he went to Spain for 3 months and stayed for 11 years. He’d been playing at The Tower Ballroom Blackpool, when he got a phone call from Spain from his old keyboard player saying they needed an act to go on after the comedian. He wanted a good act, and he thought Eric was the one to do it. Eric gave in, and was still there in Benidorm many years later.

Eric really specialised in up-tempo dance l music, often close to rock and roll. Eric was held in high regard by his musical peers, including Louie Bellson, with whom he recorded in 1967 on an album entitled ‘Repercussion’.

Eric was best known as a swing drummer, but he was actually a multi-percussionist. Classically trained as a timpanist, his unique approach went beyond the scope of orchestral accompaniment. His kit, along with a massive collection of percussion, was set up on a rotating stage, and he was one of the first to turn the ‘timps’ into a solo instrument. He also played xylophone, glockenspiel, military snare drum, tubular bells, Chinese and orchestral gongs, and in his signature ‘showmanship’ routines, such as “Persian Market”, he would run between these, with various pyrotechnics and flying mallets with split-second precision. It was a hell of a show. 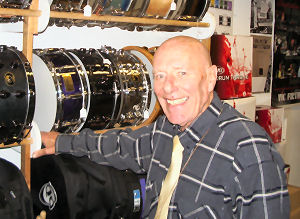 He was married three times, and died of a brain haemorrhage, aged 87.

RIP Eric – you may not have known it but every time I saw you playing, you rocked!