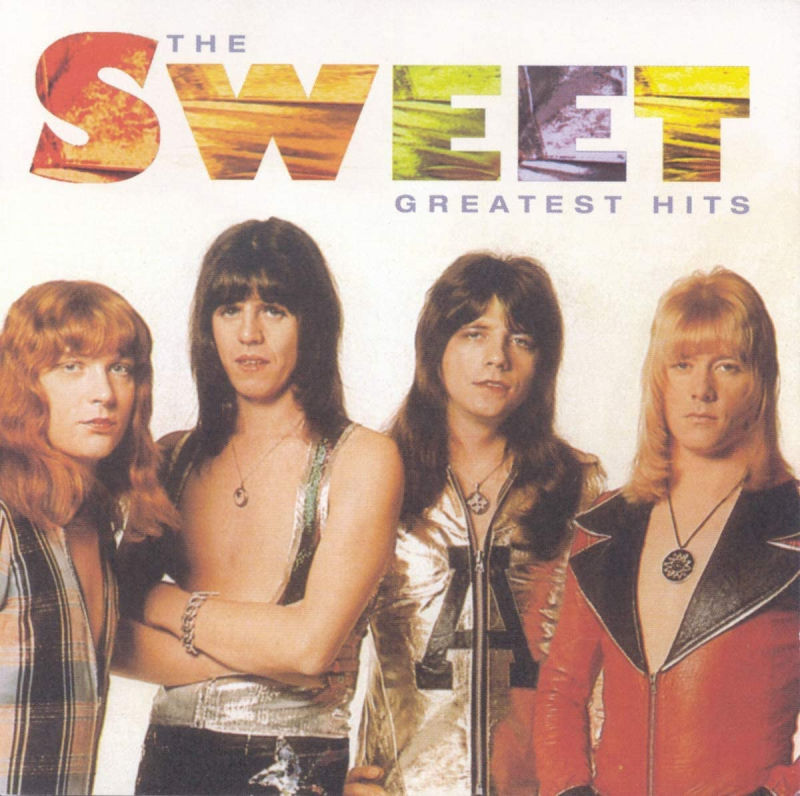 Michael Thomas Tucker was born on July 17 July 1947 and died on 14th February 2002. Like most of my drumming generation we’d bump into one another from time to time and have a beer or a coffee and I came very close to playing with the Sweet in Russia after Mick had ’‘crossed the wide river’ and Bruce Bisland was playing drums for them. Unfortunately Bruce had crashed his mountain bike and damaged  his wrist whereupon Andy Scott asked what I was up to for the next few weeks and would I be interested in going on a Russian tour with his version of the Sweet. Now the nearest I’ve been to Russia was East Germany when the Berlin Wall was still there so I rather jumped at the idea!

I agreed I’d go and almost as an afterthought I politely asked Andy whether I needed to personally go to the Russian Embassy to Kensington Palace Gardens to pick up my Russian Work Permit?

Ah! It seems there was a slight problem with that.

The permits had already been issued and they were now stamped in  the relevant passports and couldn’t be changed – nor could any more permits be issued. So it was suggested I went to Russia with Bruce Bisland’s passport. Now Bruce is a jolly nice chap who’s not anywhere near as tall as me, has blonde spiky hair and to be honest  was considerably more bulky than me. Somebody reasoned that if I got myself into any trouble I could produce my own passport and everything would be straightened out.

I thought about it for a split second and suddenly realised I’d completely forgotten about something I was doing for the next few weeks so unfortunately  I was not going to be available,  (If I was to be  rumbled in Russia I’d  read Solzhenitsyn many years earlier and he ‘Red Report’ more recently so I felt I could easily find myself on my way to a gulag in the arctic circle. I thought I’d give it a swerve!)

Actually there was a time when I was briefly in a version of the Sweet with Brian Connoly and we actually put some tracks down with John Verity in the mid to late seventies which I’m told have become the Holy grail and fans of the band refer to them as the “Lost Sweet Tracks” So much for the plot-laying, let’s get to the point.

As I said, Mick Tucker was born on July 17, 1947, in Kingsbury, which is a suburb of North West London. He was the son of Hubert and Ellen Tucker and was actually married twice:to his first wife Pauline until her death in 1979. He then  married Janet until his own death on February 14, 2002, in Welwyn Garden City, Hertfordshire, England.

He married his first wife on 28 July 1973 at the  Church of the Sacred Heart in Ruislip. They then moved into a house nearby in Beverley Road. Like most successful musicians of his ilk, he had  a music room with silver and gold albums on the walls for the Sweet awarded from markets all over the world.

By the age of 18 (in 1965), Mick Tucker had completely embarked on a career in pop music, playing around pubs and clubs in a band called ‘Wainwright’s Gentlemen’ and was later joined by vocalist Brian Connoly. It seems they were playing a mixture of Motown, R&B, and even some  psychedelic music. That band split in 1968. There are a number of recordings in existence including a cover of The Coasters or The Hollie’s hit “Ain’t That Just Like Me”, which was officially released in February 2011 on a compilation CD “Rare Mod, Volume 3” on an Acid Jazz label. The track of course features Mick Tucker on drums.

To get to the point, Mick was a founding member of a band called ‘Sweetshop’ in January 1968 along with Steve Priest, Frank Torpey and of course Brian Connoly. Torpey’s place on bass was taken firstly by Mick Stewart, then Andy Scott. In 1968, Sweetshop (you’ve guessed it), became “The Sweet”. 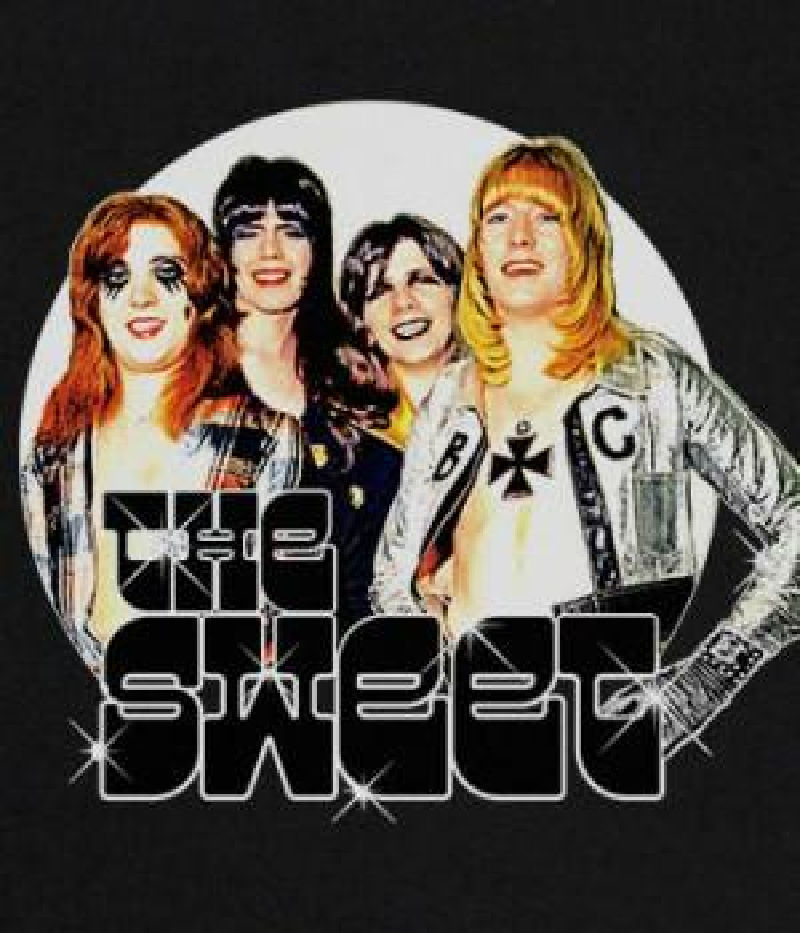 As a boy, his first interest wasn’t in drumming at all, but in drawing and art. But by fourteen he had changed his mind and switched to the drums. Unsurprisingly he was influenced by Gene Krupa, Buddy Rich and Sandy Nelson. Mick’s father offered to buy him a drum kit but only if he took it seriously.  Hubert encouraged his son, and even went as far as getting him his first gig, Rumour has it this was evidently sitting in for Brian Bennett at a local workingman’s club but I haven’t been able to verify that. He was a self taught drummer, and by the time he was 18 was playing in the aforementioned  Wainwright’s Gentlemen. However he was fired by the band  in January 1968 for being (wait for it)  “too flamboyant”,

if that was the case singer Brian Connolly  said he was leaving too.The pair of them looked for new band-mates, and the band Sweetshop was soon formed.

According to Steve Priest’s 1994 autobiography,

Are You Ready, Steve?,

(A reference to the intro the soliloquy (?) at the beginning of Ballroom Blitz.

I remember hearing stories that Sweet actually wanted to make records which were heavier and more ‘progressive than their perfectly acceptable and highly commercial hits and these songs the were invariably allowed to use on the b-sides of their hits. The Sweet had a lot of success with records produced by Phil Wainman who was himself a drummer. From “Funny Funny” in 1981 when Nicky Cinn and Mike Chapman begin writing for them they had 13 ‘Top 20’ hits, These hits included “Ballroom Blitz, Wig Wam Bam, Blockbuster,  Little Willy, and Love is Like Oxygen”

Mick Tucker was described as a talented drummer with some  complex rhythms who the internet explains could have helped any band considerably. Steve Priest said of him, “He was the most underrated drummer that ever came out of England… He was the powerhouse of the band. He was technically marvelous. His  timing was impeccable, but he had a lot of soul as well and he really felt what he was playing.” After the end of  1972 onward Mick Tucker used the same drum kit: a Ludwig Chrome over wood eight piece set. The twirl of his sticks was said to be as much a trademark as the drum kit itself. Tucker used a five piece Ludwig while on tour in Belgium. After that particular tour, he added that set to the existing Ludwig four piece set he already had. He then wrapped them all in chrome. The Ludwig set consisted of  two 22” bass drums, a 12″x 8″ tom. Twp 13″x 9″ tom–toms two 16″x16″ floor toms and a 14″ Ludwig 400 Supraphonic snare drum. I remember Mick playing an Italian kit made by Davoli in Parma from steel although I struggled to find much about it other than what I’d written in the past.. The company had been responsible for accordions and sparkle-covered electric guitars, until they suddenly produced unusual drums in the Seventies without external nut boxes. Like the American Duplex drums, Davolis had threaded tubes inside the shells to locate the tension screws thereby producing shells whose bellies were of necessity larger than their heads.

Mick Tucker played a drum solo with The Sweet which  began and ended with his version of Elmer Bernstein’s theme from The Man with the Golden Arm.

He also used two projection screens that were positioned above his drum riser. One screen showed a video of him playing the drums, and simultaneously the other screen showed him playing timpani. He would trade off solos with these videos, then come out front and play the timpani. Just before the band would come back, he would return to the Bernstein melody on  tubular bells and timpani. He tried to make sure his solos appealed to all of the audience. Tucker felt that a great performance consisted of great playing technique and presentation in equal parts adding to bassist Steve Priest’s high appreciation, guitarist Andy Scott said after his death : “Mick Tucker was the best drummer around in the ’70s. I played in the same band as him and was proud to do so. I feel extreme sadness. Cheap Trick’s  drummer Bun E. Carlos remembered that Sweet opened for them in 1979 “On most nights we went to the side of the  stage and watched them. They were rockin’ live, and Mick was fun to watch. His style reminded me of an early Keith Moon. Mick was one of the few double bass drummers that didn’t let the second bass drum get in the way of a swinging tune like ‘Ballroom Blitz.’ He had a great feel on the double bass drum, and played them effortlessly.. And those guys knew how to have fun,” Carlos said. “We’d call them back on stage during our encores and jam on ‘Let It Rock’. Mick would play my kit with the 26″ bass drum and just rock out with us. I’d hop up on the riser with him, playing guitar and watching him play. We had some great times together.

“Mick’s tastefulness, precision, and strong signature put him at the very top of the list of drumming heroes I had when I was trying to master the profession,” he says. “Technically, he was right up there with Ian Paiceand John Bonham. Like a kid in a candy store, I devoured his selection of trademark tricks and licks, which he delivered so musically, and with conviction and grace like no one else. It may have been Peter Criss who first got me into drums, but it was Mick Tucker whose drumming most influenced me and who taught me how to play music.

As I said right at the start Mick Tucker died on 14 February 2002 in Welwyn from leukemia aged just 54. He’s buried in an unmarked grave in Chorleywood House cemetery. A wooden bench with a brass plaque funded by fans as a dedication to Tucker is also positioned in the grave’s vicinity. Five  years before his death Mick Tucker had a bone marrow transplant from his brother in an attempt to combat his leukaemia