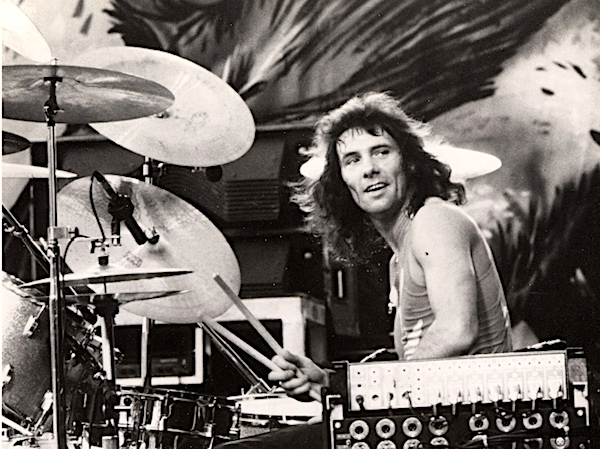 I knew Aynsley Thomas Dunbarwhen he was a ‘face’ around London in the sixties who I bumped into a lot around the drum shops, ‘frothy’ coffee bars and London clubs like ‘The Speakeasy’ in Margaret Street and of course the Marquee in Wardour Street. We knocked about with him when he moved to California around 1970, when Argent were just beginning to make it over there, and I toured America with him when he was with Mark Volman and Howard Kaylan in a band called The Fluorescent  Leech and Eddie, aka ‘Flo and Eddie’. Aynsley stayed with them for six months.

Aynsley was born in Liverpool on January 10th, 1946 and started out on violin but says he didn’t like the sound and at nine years of age like a great many other drummers, he discovered saucepan lids and began to bang on them. He started playing drums at the age of 11 when he got a snare drum to which he added first a bass and hi hat, then a small tom then a floor tom and eventually a couple of cymbals.I’m sure you get the picture.

He went to lessons in Liverpool when he was 13 and like many guys of the era learned to play with a traditional grip. It seems he was evidently better at the rudiments than his teacher who soon  realised this and moved the lessons on quickly to teaching him how to read music. 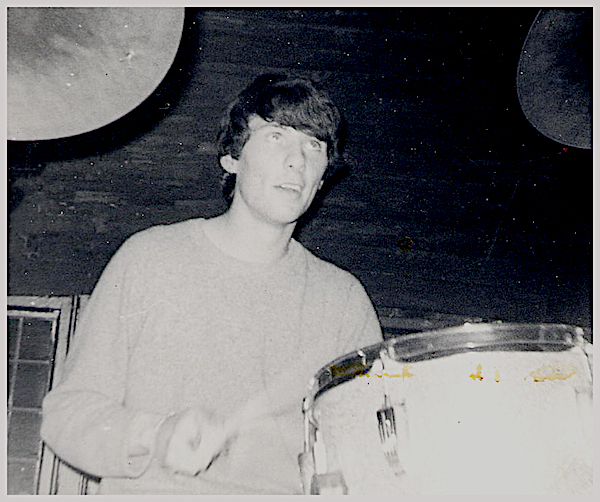 In his time Aynsley has played with a great many famous people. Jeff Beck, David Bowie, Eric Burdon, The Fluorescent Leech and Eddie, Jefferson Starship. Journey, Sammy Hagar, Ian Hunter, Lou Reed, Nils Lofgren, John Mayall, Michael Schenker, UFO, Whitesnake and Frank Zappa to name just a few..He came to heavy music’s notice with his own band called The Aynsley Dunbar Retaliation, a name which I knew was his riposte to John Mayall who had sacked him for being too busy (Mayall wanted an out-and-out blues drummer and Aynsley wasn’t happy to just be that). 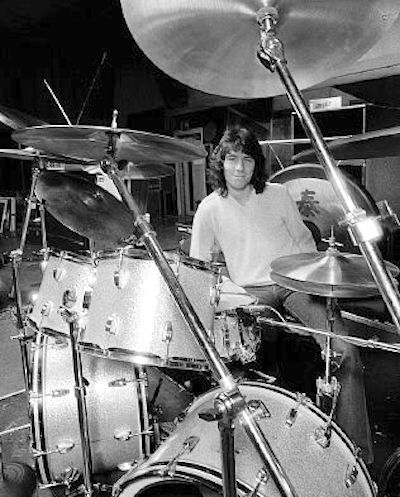 But to begin at the beginning, even though the internet says his first ‘pro’ gig was in 1963 with Derry Wilkie and the Pressmen, it transpires he’d been playing Dixieland jazz at 15 with first Leo Rutherford, then the Merseysippi Jazz Band. By the time he’d reached the age of 17 he was into modern jazz and the likes of Joe Morello, Max Roach, Louie Bellson, and Elvin Jones. He says in the early days he struggled to get records of these heroes in Liverpool

In January, 1964,  Aynsley joined The Flamingos who, after a short tour of Germany, got together with the comedian Freddie Starr  to form Freddie Starr and the Flamingos, before Aynsley first joined the Excheckers, and then the aforementioned Stu James and the Mojos. They had a hit with “Everything’s All Right” written by the original band members. It was in ‘64, after rock ‘n’ roll had really captured the imagination of the whole of Liverpool,  that he moved on to more aggressive music when he joined The Mojos who were eventually renamed Stu James & the Mojos. He stayed with them until 1966 when, like several others, he auditioned for  the gig with Jimi Hendrix. The story goes that Hendrix had difficulty deciding between him and Mitch Mitchell and to settle the issue he tossed a coin. The rest is history. 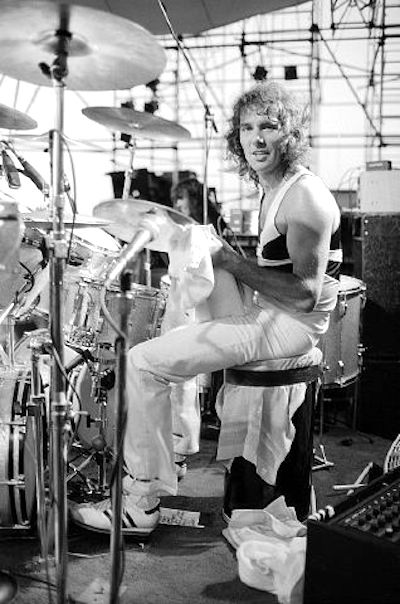 After leaving the Mojos  Aynsley joined John Mayall’s Bluesbreakers replacing Hughie Flint. This was in 1966 when Peter Green and John McVie were both in the band and they recorded some of what became the British Blues repertoire like “Hard Road”. As a Bluesbreaker, Aynsley also recorded with Eddie Boyd and released an EP record with Paul Butterfield. It was through these Bluesbreaker concerts that other drummers found out for themselves the quality of his solos. Often I remember he did this in his version of Brubeck’s :Take 5’ He was eventually replaced by Mick Fleetwood.

Aynsley’s next gig was with the Jeff Beck Group, with Rod Stewart and Ron Wood, playing on Beck’s tracks like “Rock My Plimsoul”. Before leaving the band, the whole group appeared on an album by Donovan called Barabajagal. In 1967, He also had an offer to join the Yardbirds with Jimmy Page which the smart money said would have lead to an offer to join Led Zeppelin. We now know he didn’t take either job. 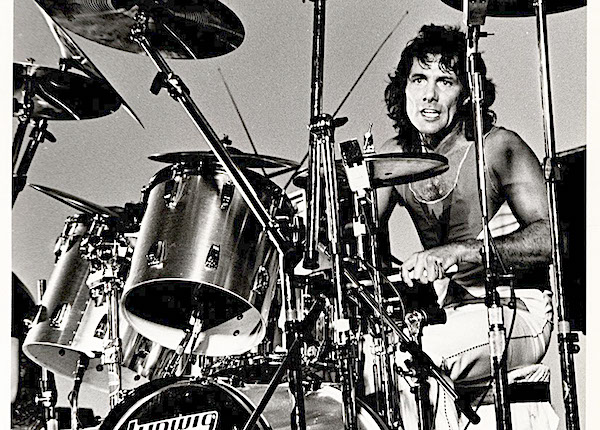 Retaliation gave up the ghost and Aynsley formed a new band, Blue Whale which began its career by touring Scandinavia. The first version of King Crimson had just called it a day whereupon Aynsley tried to recruit Robert Fripp as Blue Whale’s guitarist. Fripp in turn unsuccessfully tried to get Aynsley into Crimson. The Blue Whales were playing progressive rock and made just one album including a cover of one of Frank Zappa’s songs called “Willie the Pimp”.  Frank Zappa was in Belgium at the same time as them at a record festival, where he sat in on a couple of songs. Later they ran into one another at the SpeakEasy in London’s Margaret street and Zappa invited Aynsley to: join his new band, move to America, and live in his house. Aynsley arrived in the U.S, was picked up at LAX by Frank’s wife and moved into the Zappa family’s Los Angeles house for nine months. He set up his drums in his basement.and was immediately put to the test when Frank immediately asked him to remind him why he’d hired him. More or less at that very moment the pair of them started creating together.

Aynsley first appeared with Zappa on Chunga’s Revenge and toured with the old ‘Mothers of Invention’ in 1970. Frank then approached Mark Volman and Howard Kaylan of the The Turtles (check out their piece on managers on Youtube) to join his new version of the Mothers of Invention, appearing on such albums as Fillmore East: June 1971. This gave Aynsley a chance to show off his jazzier chops. In 1971, John Lennon and Yoko Ono joined Aynsley with Frank and the Mothers to record the live album ‘Sometime in New York City’.In time he worked on albums like The Grand Wazoo and Waka/Jawaka he was also on the soundtrack of Zappa’s film ‘200 Motels’. 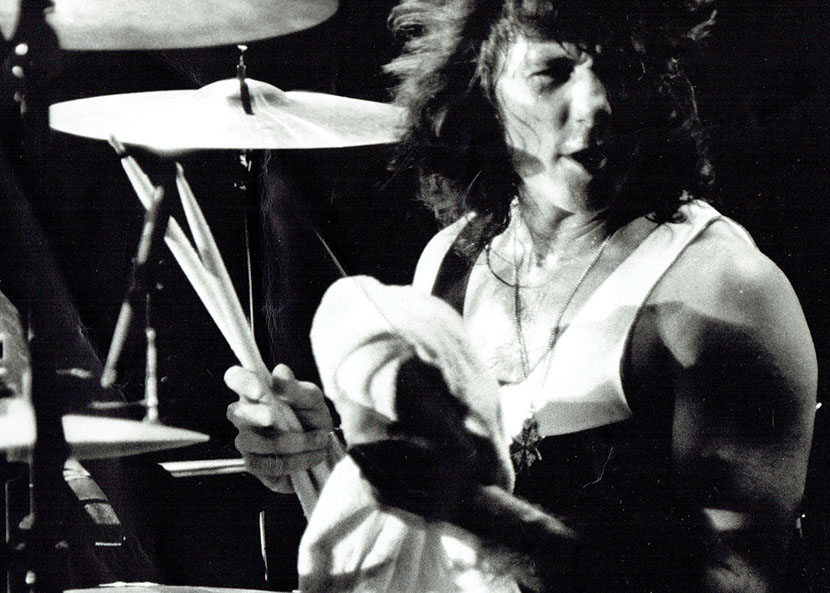 When Howard Kaylan (Flo) and Mark Volman (Eddie) jumped ship from Zappa’s band in 1972 (after he ended up in the orchestra pit at The Rainbow in London which confined Frank to a wheelchair), Aynsley joined them as a member of their backing band for a short period when they supported Argent in America. Eventually he went back to the Mothers to work with Zappa on jazzier studio projects like Waka/Jawaka, The Grand Wazoo, and Apostrophe’, as well as continuing his studio work for other artists like David Bowie around 1973 for Pin-Ups and Diamond Dogs. [I was taking coffee with my writing partner and pal, Nigel Constable who reminded me of something about Aynsley I’d forgotten: he wasn’t on the record but  played on a live version of Bowie’s “A Space Oddity.” I listened to what he played on it on Youtube and it really is the essence of his playing.]

Aynsley recorded a cover of the Mojos hit, Everything’s All right, and Bowie’s huge hit, Rebel Rebel. In 1973 he also recorded Lou Reed’s album Berlin with Jack Bruce, Steve Winwood, and Tony Levin. In 1974 after having recorded twelve albums in two years Aynsley was acclaimed by the music industry as the world’s leading session musician.

Half way through the 1970s Dunbar played drums for Nils Lofgren before contentiously (as far as he was concerned) throwing his lot in with Journey for their first four albums. From here he joined Jefferson Starship for three albums. Next came the Tubes before he eventually joined Whitesnake in 1985 and replacing Cozy Powell. Next he spent time working with Pat Travers,  Eric Burdon, Michael Schenker, UFO and the Animals. 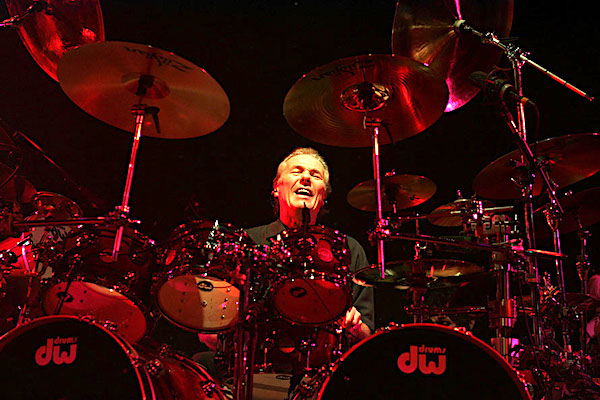 The Journey gig came about when he was flying back and forward twice a week across the Atlantic to London to work with Bowie,  Aynsley missed calls from Santana’s guitarist Neal Schon and their manager Herbie Herbert . When Aynsley finally returned the call he was introduced to a new jazz-rock fusion group named ‘Journey’. He was interested in being involved with a rock-fusion band, so he joined them, recorded and co-wrote four albums, Hustler, was on the third  which featured Aynsley’s first use of double bass drums.
Journey didn’t want to push the envelope and deviate from their original arrangements every night so this was the cause of some angst because Aynsley definitely wanted to create and challenge the band with rock-fusion music .The band we’re told, were more interested in power ballads so the the result was he left Journey after almost five years, a lawsuit ensued which Aynsley won, although he was replaced by Steve Smith.

In 1976, Aynsley played with Sammy Hagar’ before playing for the second time with Nils Lofgren then came jefferson Starship in 1978. He stayed with them until he took a hiatus to bring up his four kids in San Francisco. 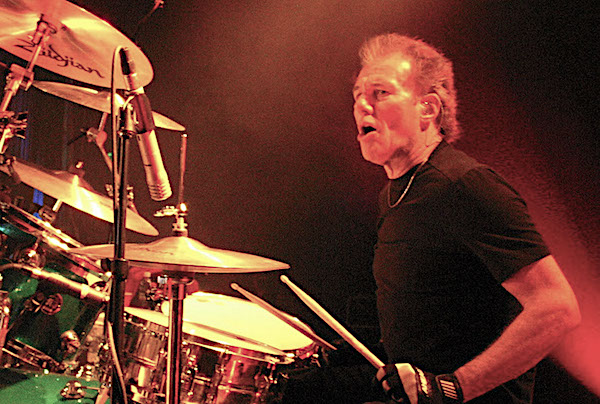 David Coverdale persuaded him to come out of retirement and join Whitesnake which he did in 1985 whereupon they had several hits. Nine years later he was back on the road again severally with Pat Travers, UFO, John Lee Hooker and Michael Schenker,

It was in the October of 1996 that he joined Eric Burdon and the New Animals and this led to him reuniting with John Mayall and Spencer Davis to perform for the Official 2000 Grammy Awards. The New Animals even Spencer again, playing at the U.S. Democratic National Convention in 2000.

Aynsley recorded a cover of the Mojos hit, Everything’s All right, and Bowie’s huge hit, Rebel Rebel. In 1973 he also recorded Lou Reed’s album Berlin with Jack Bruce, Steve Winwood, and Tony Levin. In 1974 after having recorded twelve albums in two years Aynsley was acclaimed by the music industry as the world’s leading session musician. 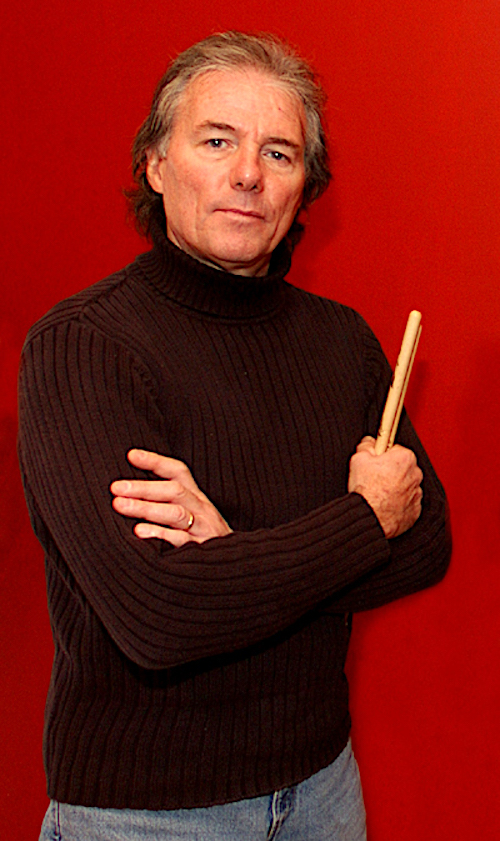 In October 1996, Aynsley joined up with Eric Burdon and his New Animals and as a New Animal, Aynsley was reunited with John Mayall and Spencer Davis to perform for the Official 2000 Grammy Awards. The New Animals joined Spencer again, playing at the U.S. Democratic National Convention in 2000.

Since 2003 he frequently plays gigs with a rock band called the World Classic Rockers (WCR) which is a supergroup along the lines of Ringo’s ‘All Starr Band’. It was put together in in 1995 by bassist Nick St Nicholas from Steppenwolf and uses a rotating line-up depending on the core musician’s other commitments.

As far as drums are concerned in the sixties he was mostly playing Ludwig although eventually like most UK drummers he was caught up in the Hayman revolution. These days he plays DW and uses Zildjian cymbals.

I read somewhere that: “No other modern rock / jazz / blues / fusion drummer has played with as many successful bands and musicians as Aynsley Dunbar”. It would be difficult to quantify but sounds like the truth to me.

So he’s still going strong and In 2017 Aynsley Dunbar was inducted into the Rock and Roll hall of Fame as a member of Journey and I found a quote on the internet which told it like it is:.
“Over his career, he has demonstrated the ability of playing many different styles including jazz, blues, fusion, rock and progressive rock. With over 30 gold and platinum records from over 112 albums, Aynsley Dunbar has proven himself one of the finest drummers in the business for over forty years, whether as a member of a band or as a session musician.”

I see no reason to disagree with those sentiments and for me he really is the most accomplished drummer to come out of Liverpool..