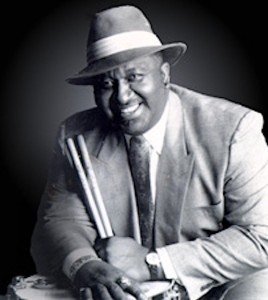 I have bumped into Bernard Purdie quite a lot at trade shows over the years. He’s a gregarious guy and we’ve had some pleasant, informative and downright funny conversations together. By the way, just in case you meet him his first name is always pronounced in the American way, with a stress on the last syllable as in Bernard.

Bernard Lee ‘Pretty’ Purdie was born on June 11, 1941 in Elkton, Maryland which is 80 miles from Washington DC and just about twice as far from New York. He was the eleventh of fifteen children and known as ‘Bugsy’. As a six-year-old he began to knock out rhythms by hitting buckets and cans with sticks and at 14 years of age he got hold of his first real drum set. Almost immediately he became the most important provider for the family – earning money from playing with country bands and in carnivals. He learned the elements of drumming techniques from overhearing lessons being given by a guy called Leonard Heywood. He later took lessons from Leonard himself and then played in Heywood’s big band.

This learning curve enabled him to feel his way into just about any kind of music, because he wanted to know all styles and was evidently never afraid to try something new. In high school he had his own trio: ‘Jackie Lee and The Angels’. 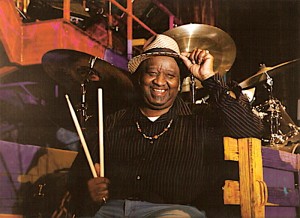 After finishing high school he moved 57 miles in a south-westerly direction to Baltimore where there were a great many jazz and burlesque clubs, so more opportunities for musicians to work in. But he wanted more and moved to New York in 1961 when he was 19 in order to obtain a licence to perform in public – you needed to be at least 21 and he lied, claiming he was born in 1939. There he played sessions and frequently visited the ‘Turf Club’ on 50th and Broadway, where musicians, agents, and promoters met and touted for business. It was during this period that he played for the saxophonist and harmonica player Buddy Lucas who nicknamed him ‘Mississippi Bigfoot’. 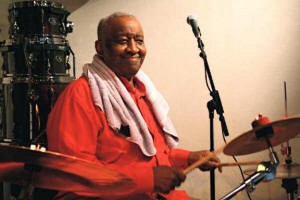 He played first with Lonnie Youngblood then with the great sax player: King Curtis. At this time he found himself part of ‘The Brill Building’ crowd (with songwriters Barry Mann, Carole King, Neil Sedaka, Burt Bacarach, Neil Diamond, Gerry Goffin et al) recording original tracks or ‘sweetening’ others by playing new drums over the top of them. One of these hit tracks was “Just One Look” by Doris Troy which was meant to be a demo but was so good it was released as a master. Another was “Love Is Strange” by a duo called Mickey and Sylvia. When King Curtis was asked to back Aretha Franklin, Bernard went with him. He stayed with her through her “Filmore West Live”, “Young Gifted and Black” and “Amazing Grace” albums. He acted as her Musical Director for quite a lot of this time. As I said, Purdie became Aretha Franklin’s musical director in 1970, and claimed that “backing her was like floating in seventh heaven”.

It was Bernard who drummed on a couple of cuts on Steely Dan’s “Aja” and it appears these tracks are so good studio engineers use them to test speakers. He recorded “Gaucho”, “Home At Last”, and “Babylon Sisters” (complete with his signature Purdie shuffle). 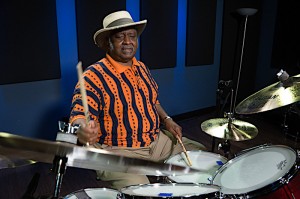 He also found time to play for Isaac Hayes, Donny Hathaway, B.B. King, Lou Donaldson, Joe Cocker and Hank Crawford. The full list is comprehensive enough although there is an anomaly within it for which he continues to receive a certain amount of ridicule – Bernard Purdie claims to have recorded with the Beatles! That said his other far less controversial claim to have played on more than 3000 albums to date may well be true although as is the nature of these things it’s difficult to verify one way or another. One thing which is eminently verifiable though is that claim to have played on 21 tracks on the first three Beatle’s albums. Drum forums on the internet are full of controversy about this but instead of stirring it all up gentle reader, I’ll leave you to look it up for yourselves if you so desire. Whatever you make of it, it’s worth considering he did play on the sound track of the film of “Sgt Pepper’s Lonely Hearts Club Band”.

[There is a very slightly more acceptable option around that he may have been confused and actually played on the original pre EMI tracks recorded in Germany in 1961 by Bert Kaempfert with Tony Sheridan and the Beatles moonlighting as ’The Beat Brothers’. These tracks were pre-Ringo and included “My Bonnie Lies Over The ocean” and “When The Saints Go Marching In”. However, to muddy the waters even more, they were released when he’d just moved to New York and the very idea of going to Europe to replace Pete Best on a record didn’t make any sense.].

Suffice it to say if Bernard is feeling insecure and looking for kudos, he shouldn’t be. He certainly did play on a great many brilliant tracks including all of Steely Dan’s “The Royal Scam”. 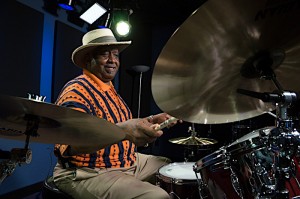 peaking of kudos, he’s never been backward in coming forwards and when Bernard was doing several sessions a day he took to bringing homemade ‘sandwich boards’ with him which he would unveil in the studio when the track was completed. These had slogans which would announce in red and blue letters:

Bernard’s style was described as the “funkiest soul beat” in the business, and the internet says: “he certainly never limited his talents to jazz but went out of his way to seek out new musical experiences”.

Bernard is best known as an influential and innovative funk musician notorious for his precise musical time keeping and of course his signature use of triplets against a half-time backbeat: universally known as the “Purdie Shuffle.” He was inducted into the Modern Drummer Hall of Fame in 2013.

Bernard Purdie is on record as saying that: “every song has a hundred components; the melody, the production and so on”. In his opinion “his job was to make it work”. 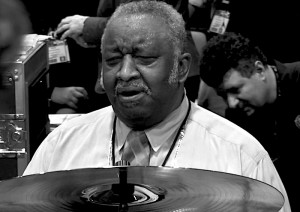 I caught sight of an interview where he says; “Show business means just that. It’s a show and a business. The business is where you make the money; the show is what you do to let people know you are capable.”

He was contracted by an arranger to play a session with James Brown in 1965 and he played on “Ain’t That A Groove”. This was one of several sessions he played with ‘The hardest working man in show business’. There’s a track called “Kansas City” he played on from the album ‘Cold Sweat’ which has a relentless shuffle on it. Purdie is also credited on the albums “Say It Loud – I’m Black And I’m Proud” and “Get On The Good Foot”. He also played on “This Is A Man’s, Man’s, Man’s World”.

As recently as 2009 he was the drummer for the Broadway revival of ‘Hair’ and appeared on the cast recording.

I very much doubt that anyone who is reading this would be in any doubt as to what exactly ‘The Purdie Shuffle’ is. But just in case you don’t, “it’s a Half-Time Shuffle that is a blues shuffle variation with added syncopated ghost notes on the snare drum.” There are variations on Bernard’s original shuffle which can be heard on songs such as Led Zeppelin’s “Fool In The Rain”, The Police’s “Walking On The Moon” and Toto’s “Rosanna”.

As I said Purdie’s shuffle can be heard being played by the man himself on Steely Dan’s “Babylon Sisters” and “Home At Last”. 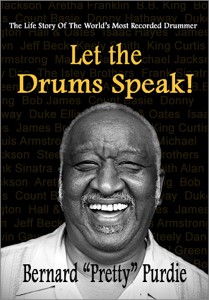 In his time Bernard seems to have been involved with drums from several companies including Sonor, Ludwig, Pearl, DW, MPC, Basix and Taye. As far as cymbals are concerned unless something has changed, he has been with Sabian for a time

He’s still out there working away in his mid-seventies and shows no signs of slowing down. He does have an autobiographical book out which is available on his website called “Let The Drums Speak”.