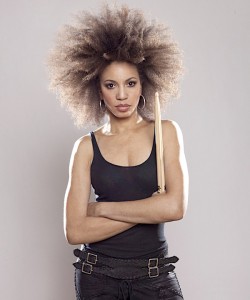 Cindy Blackman was born November 18th, 1959 in Yellow Springs, Ohio which is 48 miles from the State Capital, Columbus. Her mother and grandmother were classical musicians with her mother a violinist, and her grandmother a pianist who would take the young Cindy to classical concerts. To add to the eclectic mixture her uncle was a vibes player. Her father was into jazz, so she was exposed to the likes of Miles Davis and Ahmad Jamal from an early age, and she was first seduced by the drums in around 1966 when she was seven. She saw a set of drums at a neighbour’s house sat down on them and was hooked. As she remembers it: “to me the experience felt completely natural, like breathing. It didn’t feel awkward at all”.

She moved from here to a toy drum set, then managed to persuade her sceptical parents to provide her with a proper, playable set of drums. Not long after she was playing in the school jazz and concert bands, then the orchestra.

Four years later the family moved to Bristol, Connecticut where she eventually studied at the Hartt School of Music, 20 miles away from home in Hartford. This was the music school where Jeff Porcaro’s uncle Emil Richards, Dionne Warwick and many more artists were educated before going on to make their names in music.

But long before this, around the time she became a teenager, she was taking more than a casual interest in jazz and was heavily influenced by Max Roach. Once she acquired that proper drum set she was off and running. 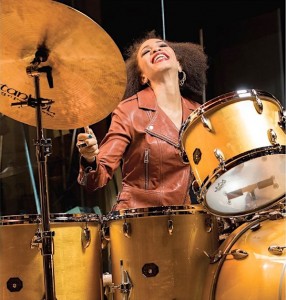 At this time, as luck would have it, Tony Williams came to her local drum shop to do a clinic and she saw ‘four-limb-independence’ for the first time – up close. This certainly left its mark on her. He was, she admits, a huge influence on her and confesses:

“I just love and loved everything about Tony. Not only was he a master technician, a master drummer, the innovator of the age; but also he was a sound innovator. He had so many things that elevated the sound and the level of skill required to play this kind of music.” Much later in 2010, she made a tribute album to her hero called “Another Lifetime” with Mike Stern, Patrice Rushen and Vernon Reid.

Eventually around 1980 Cindy enrolled at Berklee College of Music in Boston to study with Alan Dawson who had also been one of Tony Williams’ teachers. Alan was instrumental in getting her independence and hands together. She’d been at the college for eighteen months when she was offered a gig with ‘The Drifters’ after which she left Boston and moved to New York City. This would have been around 1982.

Once she arrived in the Big Apple she actually worked as one of those street performers you’d see up and down Broadway and on Times Square. At the same time she was actively searching for, and finding, the gigs where dyed-in-the-wool jazz drummers like Roy Haynes, Art Blakey, Philly Joe Jones, Louis Hayes, Billy Higgins, Jack de Johnette, and (of course) Tony Williams were playing. This was a time of learning for Cindy who by then was 23 years old. It was now that Art Blakey took her under his wing and she tells the story that she learned a great deal about the instrument simply by watching and talking to him. 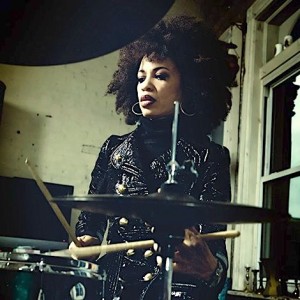 Cindy Blackman admits she met a lot of prejudice when she started playing jazz. Not just about a black woman doing it, but also people were even prejudiced against her hair! Naturally she ignored all this.

She specialised in jazz-rock fusion and in 1984 she was offered a recording contract after making her mark on a radio programme called ‘Jazz Stars Of The Future’ on WKCR-FM – Columbus University’s radio station in New York. Three years later some of her own compositions were on ‘The Verses’ album put out by a trumpeter called Wallace Roney and because of this Muse Records offered her a contract to lead her own band.

In 1993 something happened which really brought Cindy Blackman to the attention of the much wider world of music.

From out of the blue she received a call from Lenny Kravitz in Los Angeles asking her to play something over the phone to him. As Cindy tells it she sat at the drums and went: ”Boosh bat-bat, Boosh- Boosh- Boosh- bat down the phone and he immediately asked her if she could be on a plane to The West Coast immediately. She turned up the next day and the penny dropped, she discovered it was an audition and, as she tells it, there were something like forty two other drummers there for the same reason she was. 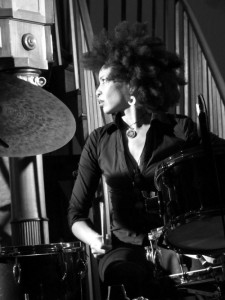 The rest is history. She got the gig and ended up staying for two weeks although she didn’t actually play drums on the record of “Do You Want To Go My Way” – Lenny Kravitz, who is a multi-instrumentalist did. However she did play on the associated video and subsequently joined his touring band. This was a quantum leap for someone who was a world-renowned jazz- and jazz-rock specialist who now found herself playing those heavy, funky, rock and blues grooves in the music which Lenny Kravitz is justifiably famous for.

She loved it although it was a ‘baptism of fire’ for Cindy because she discovered even though she’d easily mastered the nuances of the music it wasn’t quite so simple to put it into practice in front of tens of thousands of people if you’ve never done it before. Her first gig with Lenny was in 1993 at ‘Pinkpop’, an open-air festival in The Netherlands and she said when she saw the size of the audience she nearly lost it. Her experience and expertise up until then was playing in small intimate bars and clubs but this was something else – 64,000+ people raising their arms in the air and lustily singing: “Do you want to go my way”. I’ve seen the video on Youtube and at the beginning she understandably does look a little taken aback but, as she said, she forced herself to focus, ignored the audience as much as she could and everything soon came together. [BTW Cindy wasn’t alone in this trepidation, at least one of the acts on the bill at Woodstock in 1969 didn’t make it onto the film because they were simply too nervous to perform well.]

Nowadays Cindy is comfortable with playing for 100,000 people and “drive them into complete oblivion by playing a groove so strong!”

According to Cindy, Lenny puts different demands on his drummers; he wants them to play a beat for hours and make it feel good and add some exciting fills and colours. It’s not exactly jazz but she loved it. 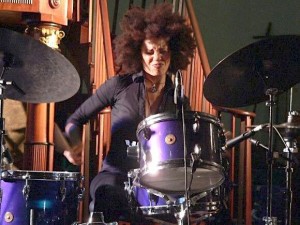 She continues to write music and in 2016 wrote for (and actually sings on) an album she played on with Carlos Santana which they made with The Isley Brothers called “Power of Peace”. The album was produced by celebrated drummer Narada Michael Walden.

The name at the top this ‘Groovers & Shakers’ piece should really read ‘Cindy Blackman Santana’ because towards the middle of 2010 she married the man who had become her boss and bandleader – Carlos Santana. He proposed to her on stage in Tinley Park outside of Chicago immediately after her drum solo. How romantic is that?! You might even say ’drumtastic’ – but I’ll try not to!

As it happens Cindy actually met her husband when she was touring with Lennie Kravitz and Santana were on a bill with them.

Obviously Cindy’s heroes were in the main jazz drummers but she loves rock music and has a couple of rockers in the mix with them: Mitch Mitchell and John Bonham.

These days she tours with (the band) Santana and besides Carlos Santana and Lenny Kravitz she has played with some truly great musicians in her time such as Jack Bruce, John Medeski, John McLaughlin, Pharoah Sanders amongst many others. 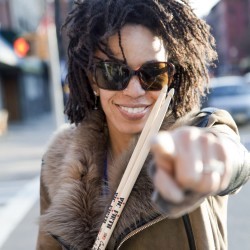 Cindy has endorsed just a couple of drum marques during her career as far as I can see: Sonor and Gretsch, although I have seen photos of her with a DW kit. Her cymbals are from the Istanbul Company .

These days like several other drummers of her ilk Cindy does clinics around the world. However, she doesn’t confine herself to her homeland , which is in itself a pretty large country to get around, she ventures further afield to South American countries like Chile, Argentina and Brazil.

Her ambition is to become a musical virtuoso and push the envelope. To quote her: “jazz is the highest form of music that you can play because of the creative requirements.”

Cindy Blackman’s philosophy is simple. She considers herself blessed and says: “to me music is completely spiritual, it’s the way you connect with your higher-self, with the universe.”