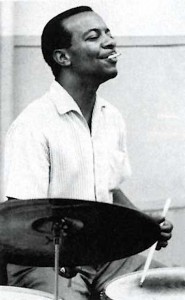 Grady Tate was born in Hayti, North Carolina on January 14th, 1932 and took up singing at four years old and drumming just a year later! Throughout the sixties and seventies when I used to listen to LP’s on the Verve label almost non-stop, he was up there with my favourite drummers mostly because he played with everyone I wanted to hear. I’m not sure how many of my contemporaries even knew who he was.

He wanted to be a singer but gave up for a while when he reached 12 and his voice broke. That said, years later he was encouraged to sing by Peggy Lee, whereupon he made many vocal records with (to me) an ahead-of-its-time soulful, gospel voice with the same sort of timbre and delivery as Sammy Davis jnr. He was an extremely tasteful drummer who became a very in demand session player (often with all my favourite jazz organists) as you’ll see when I finally get around to his discography.

Believe it or don’t, at 10 years old he was actually the drummer of choice in Durham, North Carolina.

Grady was self-taught and said he studied by listening but worked on the fundamentals of his jazz drumming when he was in the US Air Force from 1951 to 1955. He said he didn’t actually have any favourite drummers, it was the music being played that he was into. After his demob he returned to Durham to work on his education, studying psychology, literature and theatre. After graduation he moved firstly to Washington, DC to be a night-school teacher while moonlighting on drums with Wild Bill Davis. His next move was the important one, to New York in 1963. There are two reasons given for it – so take your pick. One was so he could play with the Quincy Jones Big Band, which was absolutely true, but the other was to enrol in the New York Academy of Dramatic Art. In the event we know he ultimately played with Quincy Jones and a great many others – so acting’s loss was music’s gain. 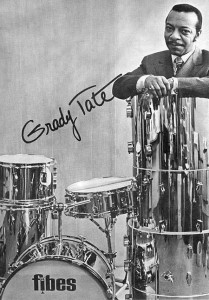 Hard bop was a musical category Grady specialised in. It’s a sub-genre of jazz that is an extension of bebop music. Journalists and record companies were struggling to categorise the music in the mid-1950s and describe a new current within jazz. The music incorporated influences from rhythm and blues, gospel music, and blues. Grady Tate’s contribution meant playing right on top of the beat, not in front of, or behind it.

I mentioned Grady played with organists and in a way he seemed to specialise in this. He played with Jimmy Smith, Jimmy McGriff, Jack McDuff and Shirley Scott on just about every tune I love and had the ability to be ‘on’ and swinging from the very first down beat. Grady played on all my favourite Hammond organ jazz titles with the exception of one. He played brilliantly on. “The Cat”, “Organ Grinders Swing”, “Got My Mojo Working”, and “Monster”. (The exception was Groove Holmes’ “Misty” on which I believe it was Idris Muhammad on dums)

It’s amazing how fifty (make that almost sixty) years after the event all this music still sounds absolutely fresh and perfect.

Grady Tate’s career résumé is extensive and seems to include everybody who has ever made musical waves and a great deal of his greatest work was with producer Creed Taylor who looked upon Grady as being CTI records house drummer . But it would be remiss of me not to give you a reasonable taste of the artists he’s played with. 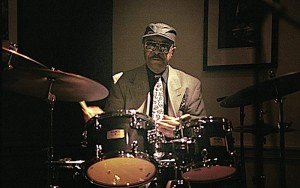 So here goes and in no particular order:

Another example of his singing is on a series of kid’s educational programmes for America called ‘Schoolhouse Rock’ working with among others, Blossom Dearie. I’m particularly fond of his interpretation of the nine times table with ‘Naughty Number 9’!

Oh, and he played drums for six years on Johnny Carson’s ‘Tonight Show’ which should have helped him out with his mortgage! (BTW Johnny Carson was also a one-time drummer.) This wasn’t Grady’s only brush with TV because he played on the ‘Twin Peaks’ sound track as well as ‘The Wiz’ and ‘The Lady Sings The Blues’ with Diana Ross.

Besides being a drummer, Grady Tate was a properly educated person, so much so he ended up as a professor of jazz, beginning in 1989 at Howard University in Washington, DC. 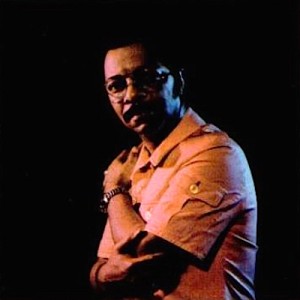 I saw Grady playing with various sets including Sonor, Pearl, Mapex (he was one of the first) and Ayotte although I suspect he would have played an American set in his early days although I can’t find a picture of anything built in the New World other than a Fibes with an 18” bass drum. As far as cymbals are concerned he seems to have spent a lot of his career playing Zildjian.

Grady Tate has been described as “the best singer to emerge from the ranks of instrumentalists since Nat Cole.”

Grady Tate died on October the 8th 2007 at 85 but was still going strong to the end. He has left a legacy of tasteful playing and singing which I believe is second to none. RIP.