I knew a great deal about Robert Wayne Colomby’s playing before I had any idea who he was.

Bobby was born on 20th December 1944, in New York and was ultimately educated at City College, where he graduated in psychology. He went on to have an unbelievably varied career. He’s not only a great self-taught jazz-rock//fusion drummer, he’s also a Grammy award winner, highly successful record producer, record company executive, and even a  television presenter for ‘Entertainment Tonight’ and the CBS ‘This Morning’ programme. And he played at Woodstock!

To knowledgeable drummers reading this he should be well-known as the drummer for  the group ‘Blood, Sweat & Tears’ of which he was the co-founder with Al Kooper in 1967. Other than that, he’s also played with many other musical artists and even produced The Jacksons’ “Destiny” album as well as Jaco Pastorius’ eponymous first solo album. More of these later…

At the end of the sixties, like most bands ‘Argent’ (of which I was what the media calls a founder member) were striving for recognition by doing as many gigs as we could wherever we could. And even though we had an album ready in 1969 it certainly wasn’t well-known enough yet. Naturally we couldn’t educate the audience by playing all of it in our live show as we made our way around the UK, Europe and America. That wouldn’t exactly have been a good idea – some might call it suicidal. Others would say it’s a big mistake to blind the audience with science and bombard them with stuff they simply didn’t know yet. Long-in-the-tooth musicians would say, never lose sight of what they’re there for – they’ve come to the gig to get down and boogie!

So, we didn’t give them  too much of our as yet unknown material even though radio stations were enthusiastically playing progressive bands with extra long tracks containing extended instrumental sections. Therefore lots of us latched on to other people’s songs to adapt to play in live situations. Blood Sweat and Tears was certainly one of the foremost of these bands being copied for their songs and exhilarating arrangements. 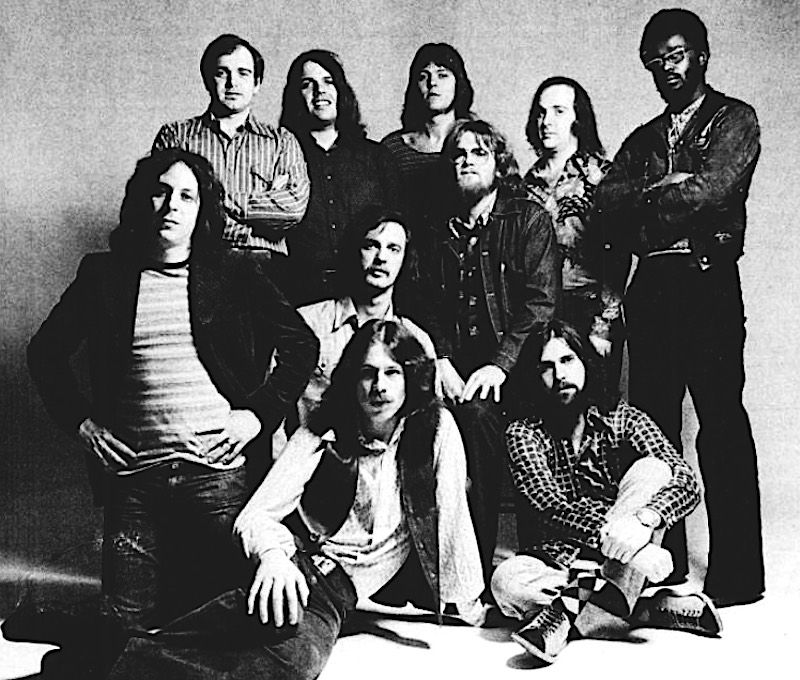 Argent were fortunate in that they/we had the Zombies material to fall back on, and in the fact that Odessey and Oracle had had a substantial hit with “Time Of The Season” as a highly successful number 1 single certainly didn’t do us any harm.

I spent an interesting afternoon looking online to ascertain how many gigs we did with ‘BS&T and came back with… none, nothing, nada, rien, niente. zilch…

I thought at least we must have  played together at the CBS World-Wide Convention which in 1969/70 actually took place in London. But “the computer says no” and there’s nothing to corroborate it. We did however both find our way onto what they called a double ‘sampler’ album called “Fill Your Head With Rock”. This was with them and a lot of other newish CBS acts where we played “Dance In The Smoke” and they played “Smiling Phases” or was it “Spinning Wheel”? And I recall meeting Bobby Colomby and David Clayton Thomas at the CBS building on the Avenue of the Americas in New York at the beginning of the seventies (where, incidentally, they had a neat trick – by the time you got up to the 13th floor where Epic Records’ offices were situated, they’d be playing your record – loudly!

Progressive Rock was happening big and in those days CBS were instrumental in putting those bands which were signed to them, together on nationwide tours and we found ourselves playing with lots of people who were coming up, just like Argent and Blood, Sweat & Tears were. This was an education for me because amongst many others I got to play on gigs with the likes of Chicago, Flock, Santana, Weather Report, Rush, Mothers Finest, Janis Joplin, 11th House, Taj Mahal, Spirit, Santana and Weather Report to mention but a few. And of course better still, I got to see their drummers close-up – Lennie White, Alphonse Mouzon, Michael Walden, Chester Thompson, Michael Shrieve, Billy Cobham and Peter Erskine et al.

So as I said, it seems even though I didn’t actually see him playing live, I knew all his licks because theirs were the songs we wanted to play like “My Days Are Numbered’ and “Spinning Wheel”. We played these and lots of others when we were working in Germany. We were playing nine 45 minute spots a night in Munich and getting ready to bring America (and ourselves) to our respective knees by touring there incessantly from 1969 onwards.

So enough of the plot-laying. 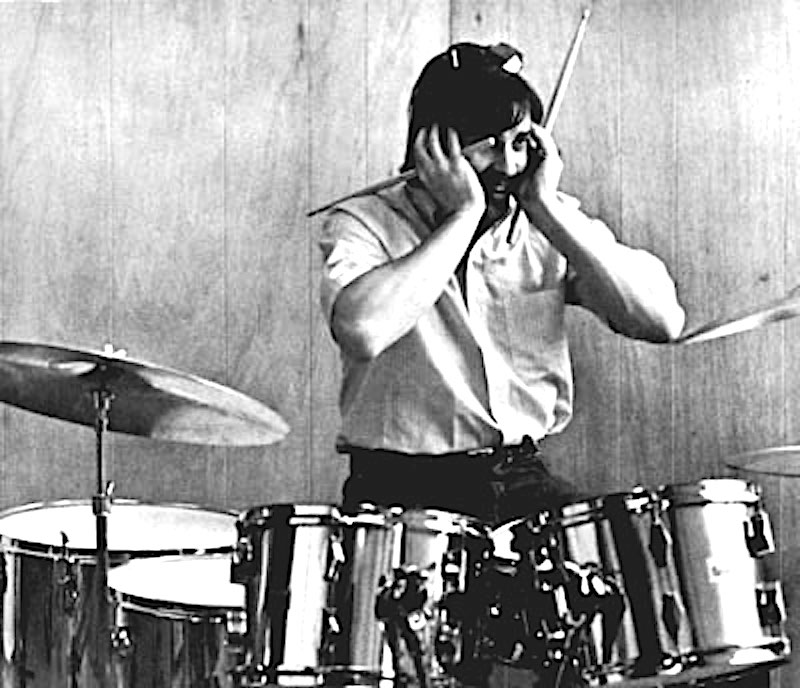 Bobby was brought up in NYC and I thought it unusual in a drummer so funky and technical, that he never had any drum lessons – but it’s true.

Of course Bobby Colomby played on the first Blood, Sweat & Tears album, “Child Is Father to the Man”, which was released in 1968 and made the top 50 on the Billboard album chart. I always liked the cover which had the guys in the band with smaller ‘mini me’ versions of themselves sitting on their laps.

So as I said, we learned BS&T songs and even though we  didn’t have a horn section to  punctuate with us, we had a really good time playing them.

The band’s self-titled second album was even more successful, critically and commercially. It got to number one on the album charts while three singles from it were equally successful. “And When I Die”, “You’ve Made Me So Very Happy” and “Spinning Wheel”.

As I said, BS&T appeared at the Woodstock festival in August 1969 and the album won a Grammy Award for Album of the Year in 1970.

Colomby was the last original member of Blood, Sweat & Tears when he stopped performing with the group in 1976. After many, many changes in the group’s membership he became (in the end) the de facto owner of the Blood Sweat & Tears name.

He produced the eponymous debut solo album by jazz bass virtuoso (and sometime drummer) Jaco Pastorius in 1976 and The Jacksons’ comeback album “Destiny” in 1978. 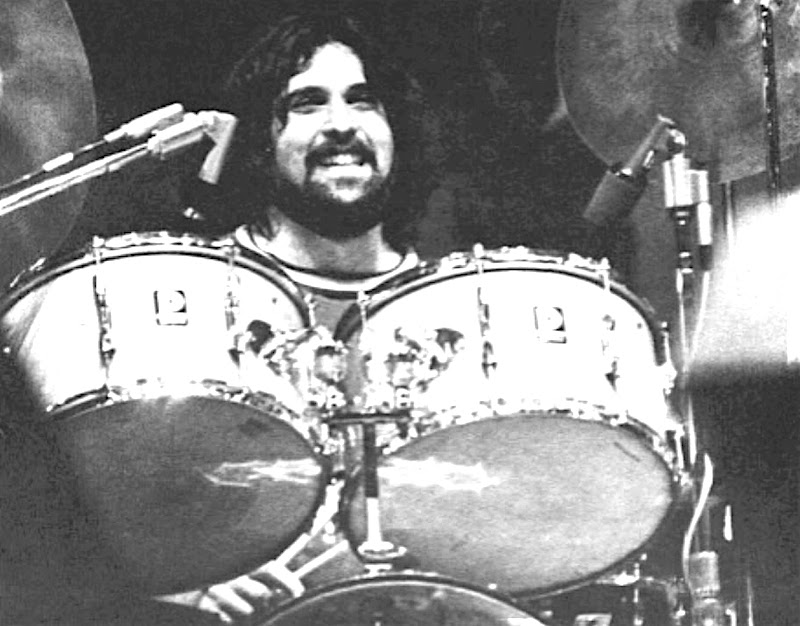 I once read an article detailing how the Jackson 5’ ’s father, Joe, could be something of an inveterate hindrance (make that bloody nuisance) in the studio and Bobby felt the best thing to do was to lock him out. When he discovered he couldn’t get in Joe called the police who came to investigate. Bobby was asked if he knew Joe and said he’d never seen him before in his life(!).

Another story I wanted to share concerns Jaco Pastorius who was depping in BS&T but didn’t attend any rehearsals nor, it seems, did he run through their somewhat complicated set at home. Bobby Colomby was freaking out and sitting behind him on the plane to a gig in Lake Tahoe, asked him to put his headphones on. Jaco didn’t nor did he run through arrangements in the dressing room. Bobby was expecting the worst and in the end the show went better than it ever had and Jaco made the songs his own. Bobby was amazed until Jaco told him nobody seemed to realise he had a photographic memory.

As a producer, Bobby also had a hand in producing ‘Earth, Wind and Fire’, Harry Connick Junior, Kenny Loggins and a host of significant others.

Then, for a few years in the late 1980s Colomby was something of a showbiz reporter for the television programmes ‘Entertainment Tonight’ and ‘CBS This Morning’.

In 2002 Colomby began producing a series of albums for trumpeter Chris Botti, including, “December”, “When I Fall in Love”, “To Love Again!” as well as the DVDs “Chris Botti Live with Special Guests” and “Chris Botti in Boston”.

He has also worked with Paula Cole (“Courage”), Jeff Lorber (“He Had A Hat”) and Leo Amuedo (“Guitar Stories”). 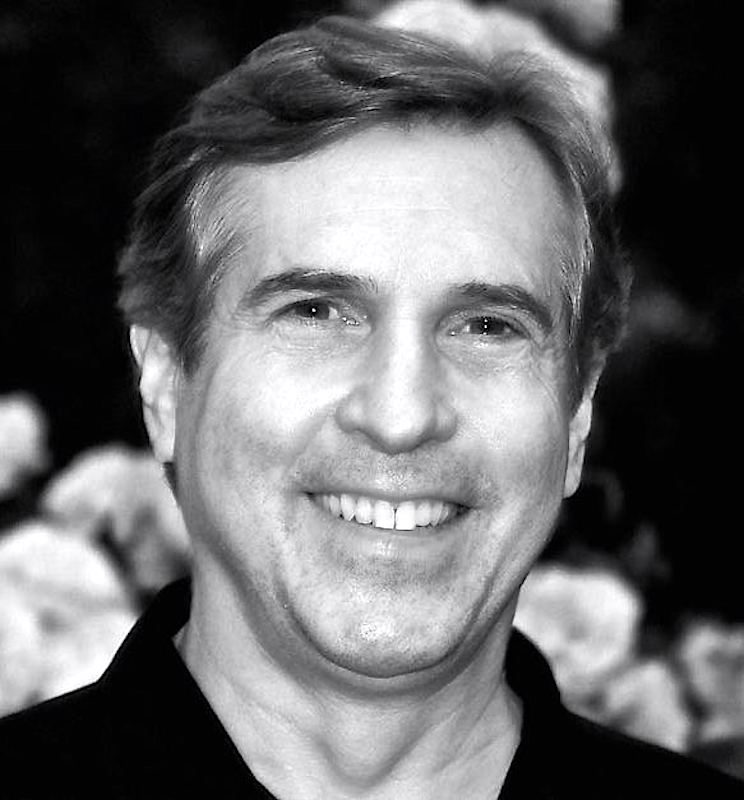 Bobby Colomby maintains ownership of the “Blood, Sweat & Tears” band name and, although it seems he no longer plays with them, he still oversees their musical direction. The band are still going strong and to date have had 149 top notch members  in their ranks  including Randy Brecker and the aforementioned Jaco Pastorious.

As far as drum gear is concerned I know he had a Premier set when the band began and also a Rogers and Fibes chrome-covered set with two floor toms and an 18 bass drum. There was also a Slingerland set with that somewhat revolutionary ‘2 to 1’ snare drum. As far as cymbals are concerned he may well have moved away from Zildjian eventually but there are photos of him with Zildjian in the early BS&T days.

At the turn of the 21st century he started his own label – ’Signal 21′ records! There appears to be no way of stopping him!