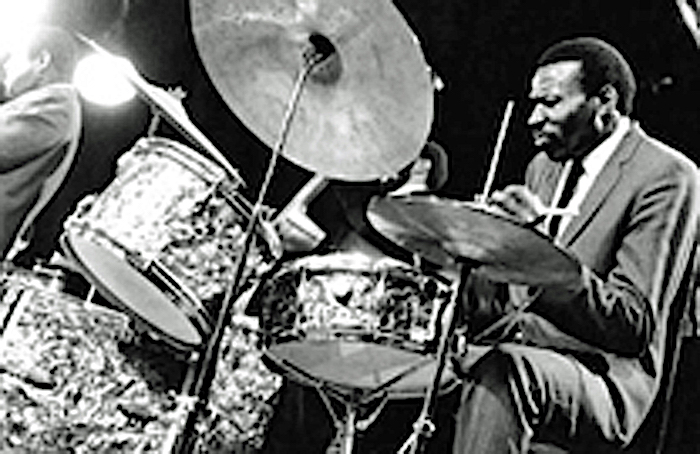 I didn’t really know Elvin Jones although we said hello to one another as we stood together as Frank Ippolito introduced us in his ‘Professional Percussion’ drum shop during my first trip to New York in 1970. At that time there was no talk about his drum battle with Ginger Baker which was mooted and eventually took place just a year later at The Lyceum Ballroom in the Strand in London on Feb 1st. I didn’t go but remember the Melody Maker made an awful lot of fuss of the whole thing which turns out to have been as recently as 46 years ago.

Elvin Ray Jones was born on September 9th, 1927 in Pontiac, Michigan which is a suburb 12 miles outside the centre of America’s ‘Motor City’ of Detroit. Like almost the whole population of Detroit, his father worked for General Motors and Elvin was the youngest of 12 children (but some accounts say there were only 10). Evidently by the age of two he was watching circus bands marching in their neighbourhood and was fascinated by their drummers. 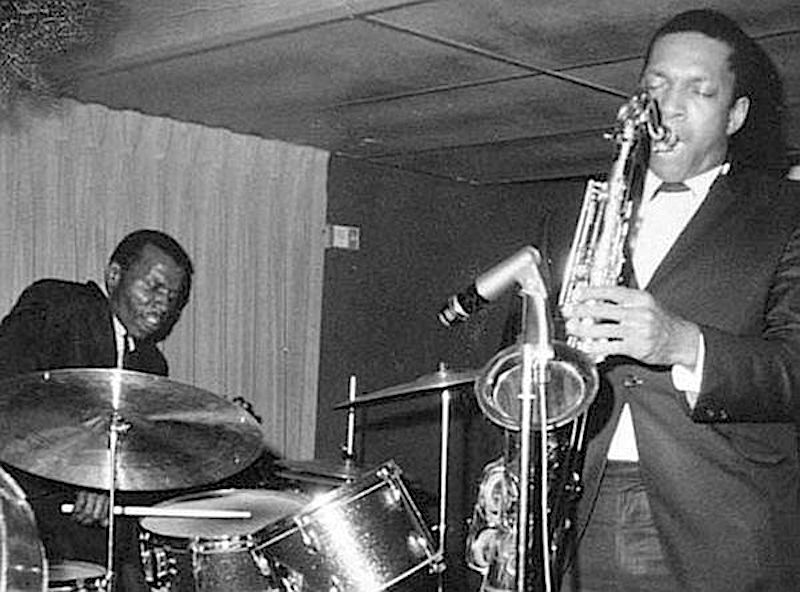 But it wasn’t just the circus drummers who turned Elvin onto music, as his older brothers, Thad a trumpeter and Hank a pianist, exposed him to jazz from an early age.

In the fullness of time he joined his High School’s marching band where they taught him all the necessary rudiments and he got started. In his early teens he began to play in the style of his very earliest influences, Jo Jones and Shadow Wilson.

In 1946 when he was 19 he enlisted in the US Army where he stayed for three years. Unusually, unlike a great many of our G&S subjects, he doesn’t seem to have had anything to do with the musical side of Army life. He was discharged and evidently went home to Detroit absolutely broke. He knew exactly what he wanted to do though – having borrowed $35 from his sister – he bought himself a set of drums. Almost immediately at the age of 22 Elvin Jones turned professional working at The Grand River Street Club. 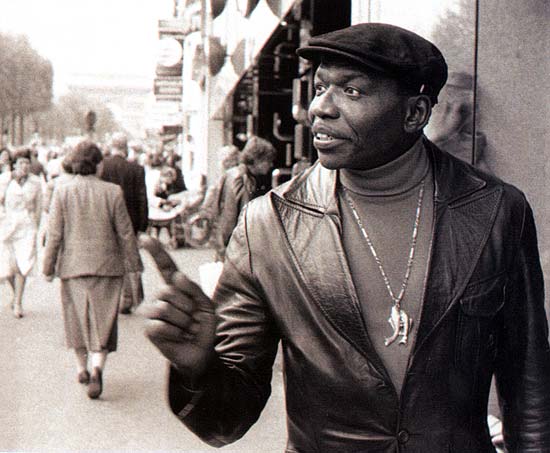 At the time Detroit was a rich city producing millions of motor cars and as a direct consequence it was equally rich in places for jazz musicians to play. A tenor player named Billy Mitchell hired Elvin and his brother Thad for three years to play at The Bluebird Inn where among other notables they backed Charlie Parker, Sonny Stitt and Miles Davis.

Eventually, and somehow inevitably, in the mid-fifties Elvin moved to New York where he auditioned for Benny Goodman – and didn’t get the gig! However, he wasn’t deterred – he’d made his bed in relocating to New York and just got on with it. Not long after this setback with ‘The King of Swing’ he began playing with the likes of Miles Davis, Charles Mingus, Bud Powell, Gill Evans and JJ Johnson. He began recording and evidently his first session was with Sonny Rollins at the Village Vanguard. These were only Rollins on saxophone, Elvin on drums and a bass player. This was breaking new ground and changed the face and especially the soundof Modern Jazz. [Check out “I Can’t Get Started”.] 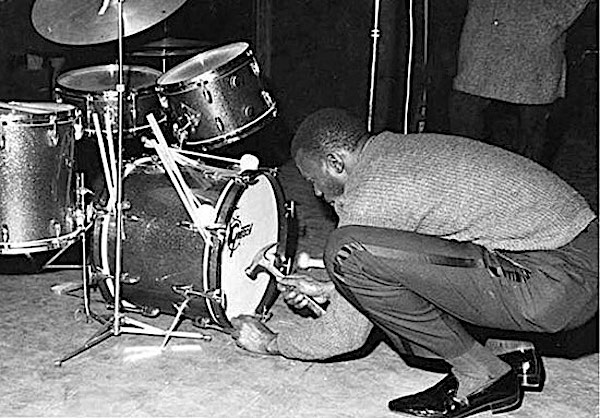 Time passed and in 1960 Elvin joined up with John Coltrane in his quartet with McCoy Tyner on piano and Jimmy Garrison on bass. This band are generally accepted to have invented the rhythmic feel of modern jazz and defined swing. In 1961 they recorded at Village Vanguard in Greenwich Village with a piece called “Chasin’ The Train” along with several others. In 1965 they recorded at the Half Note at 289, Hudson Street. In 1965 he recorded at the Half Note with McCoy Tyner on piano and these particular recordings are deemed to be Elvin’s crowning achievements – especially a piece called “One Up, One Down”.

By 1966 it seems he wasn’t too happy with the direction Coltrane was moving in and felt his style clashed with that of Rashied Ali, who was also playing drums in the group. He went to Europe with Duke Ellington after which he stayed in Paris where he subbed for Kenny Clarke at the Blue Note. He went on to lead several bands in the sixties and seventies which featured up-and-coming musicians like Wayne Shorter, Jan Hammer and McCoy Tyner. The ‘Elvin Jones Jazz Machine’ was obviously his own thing which had a changing line up including John Coltrane’s son Ravi. 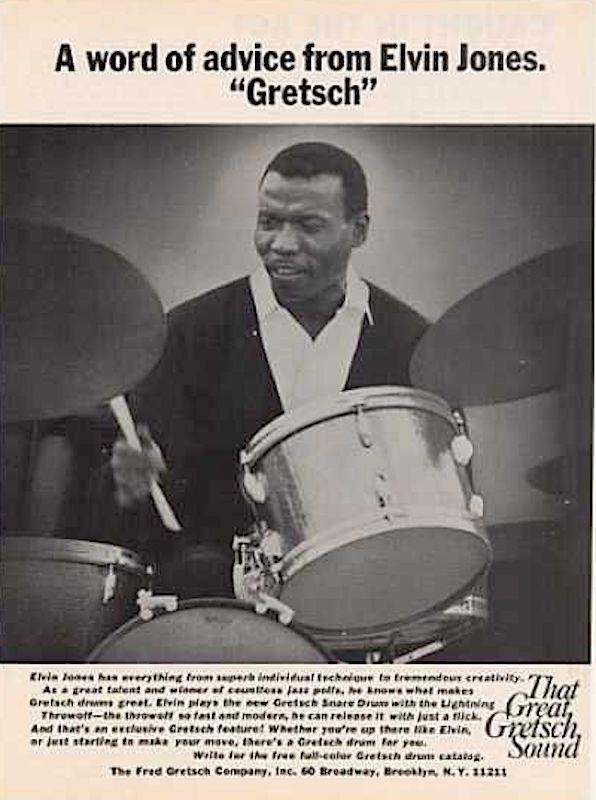 In the eighties he moved to Tokyo to run a restaurant and a jazz club with his wife. Upon his return to New York in the nineties he was in demand to do recording sessions with the likes of John McLaughlin, Wynton Marsalis, Marcus Roberts and many others.

There are wonderfully evocative pictures on the internet of Elvin playing all sorts of Gretsch drum kits: swirls, pearls, natural wood, and even a Tony Williams yellow with a ‘stop sign’ badge. There are photos of him behind a Premier set and he endorsed Camco after 1977 when the illustrious name and the rights to it were acquired by Tama and were produced by them. Even though the set which was once Elvin’s and now owned by Donn Bennett was fitted with Tama’s version of George Way’s turret nutboxes, it has ‘cloud’ badges. That set had what became his signature sizes: an 18 x 14” bass drum and an 18 x 18” floor tom, along with classic 12 x 8”, 13 x 9” and 16 x 16” toms and a 5” deep snare. His last kit was a Yamaha Maple Custom which was displayed at NAMM a few years ago, complete with blood stains on the floor tom from where he’d caught a finger while playing. 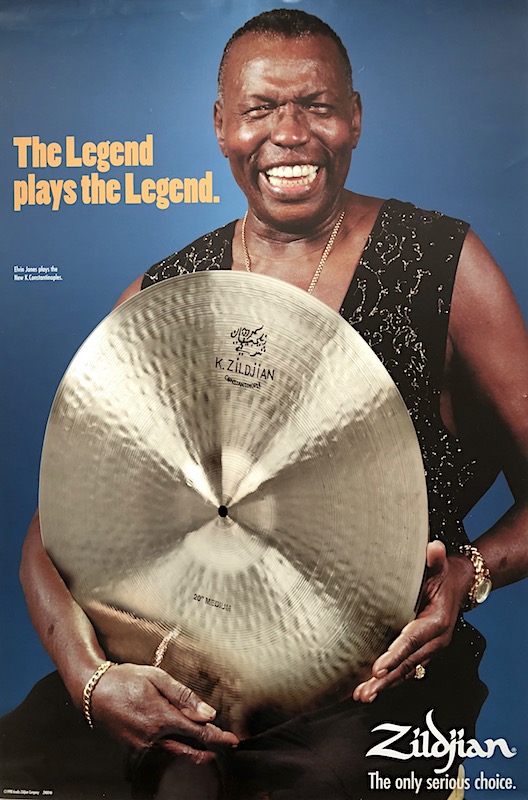 As far as a cymbals are concerned he’s sometimes pictured playing Paiste and Istanbul although we understand from a picture on Donn Bennet’s site that Elvin took possession of the very first K. Zildjians to be created in America in 1982.

As you’d expect from his background he played with a traditional grip although you probably wouldn’t guess he’d frequently play with the sticks turned around – butt-end first.

Life Magazine called him “The worlds greatest rhythmic drummer.” He had an influence on drummers everywhere including Mitch Mitchell who Jimi Hendrix called “my Elvin Jones”.

Elvin even had a stab at acting (pun intended) in 1971 Western film where he played a villain (and a drum solo!).

He was also a drum teacher who unusually not only taught how to play the instrument to schools he also taught the history of the drums. In 1991 he was elected into the Percussive Arts Society’s hall of fame.