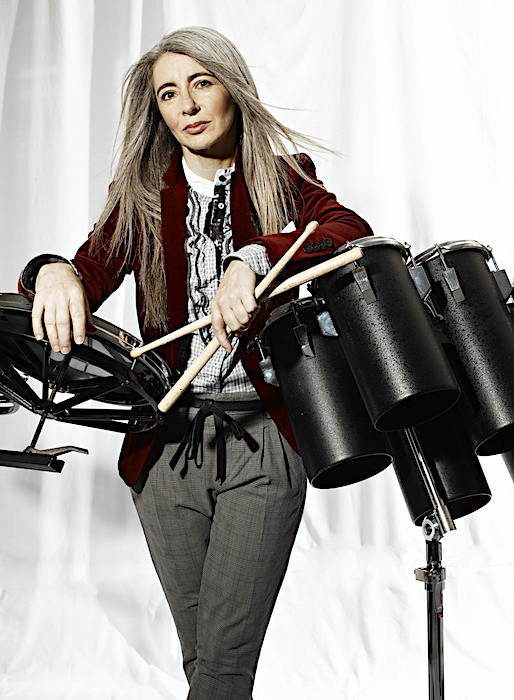 Dame Evelyn Elizabeth Ann Glennie was born on July 19th, 1965 and brought up in Aberdeenshire in a village called Methlick where Lord Byron once had a castle and his daughter, one Ada Lovelace (who had a big hand in inventing the computer with Charles Babbage) was brought up. Evelyn’s father was Herbert Glennie, an accordionist in a Scottish country dance band, so the musical traditions of that part of Scotland were ingrained in the young Evelyn early on. Her first instruments though were the mouth organ and the clarinet.

Her major influences when she was learning to play music were diverse: Glenn Gould, Jacqueline du Pré and Trilok Gurtu (whose own G&S piece is long overdue and will definitely be coming soon, I promise).

Evelyn studied at Ellon Academy which was close to where she grew up in Scotland. Eventually though she went on to the Royal Academy of Music in London’s Marylebone Road. She was also part of the National Youth Orchestra of Scotland and a member of the ‘Cults Percussion Ensemble’; formed in 1976 by a local musical educator named Ron Forbes. They toured and recorded one album, which I’m told was re-released on Trunk Records in 2012. There were 11 girls in the ensemble with an average age of 14, and oddly, the Cults website still mistakenly refers to Evelyn as being blind.

As far as I can see Evelyn still tours extensively in the Northern Hemisphere, spending up to four months each year in the United States, and performing with a wide variety of orchestras and contemporary musicians. Astonishingly she carries out over 100 concerts a year as well as Master Classes and “music in schools” performances. As if that weren’t enough she frequently commissions percussion works from composers and performs them in her concert repertoire. 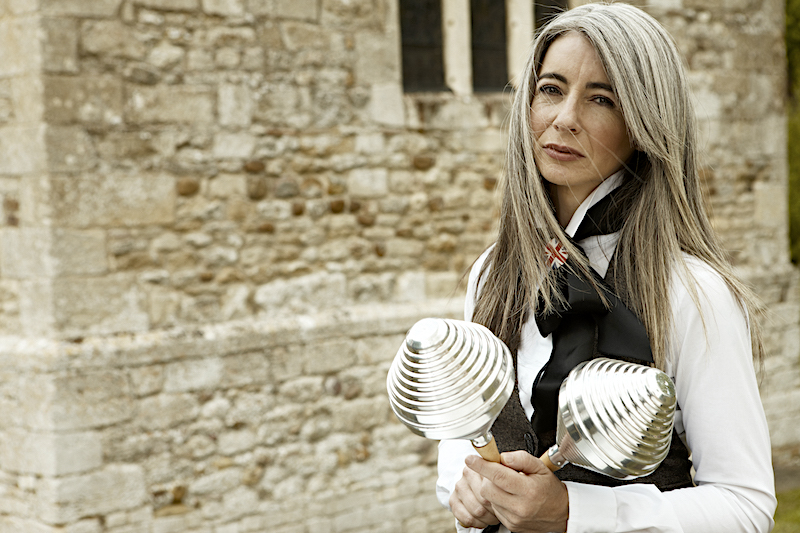 Her ancestry shines through inasmuch as she also plays the Great Highland Bagpipes and has her own registered tartan known as “The Rhythms of Evelyn Glennie”. She’s in the process of producing her own range of jewellery and also works as a motivational speaker.

Evelyn burst into the wider public’s eye when she famously performed at the Opening Ceremony of the Olympic Games in London in 2012 (along side a certain Mr Mike Dolbear), ultimately leading a thousand drummers in the opening piece of music. She then, while wearing a striking wig, played the ‘Aluphone’ during the ceremony for lighting the Olympic cauldron which burned for the duration of the games.

The wider drumming community has known for years that from the age of twelve, she was profoundly deaf. To be honest I didn’t really know what the phrase meant but it turns out the unfortunate sufferer is unable to hear anything. So how does Evelyn Glennie manage? Well, like Sandie Shaw, she mostly plays without shoes on for recording, or playing live music, so she can actually feel the vibrations of the music through her body.

She started to lose her hearing from the age of eight and of course we all know her disability certainly does not inhibit her ability to perform at the very highest level. My problem has always been remembering to make sure I’m facing her when I’m talking so she can read my lips. 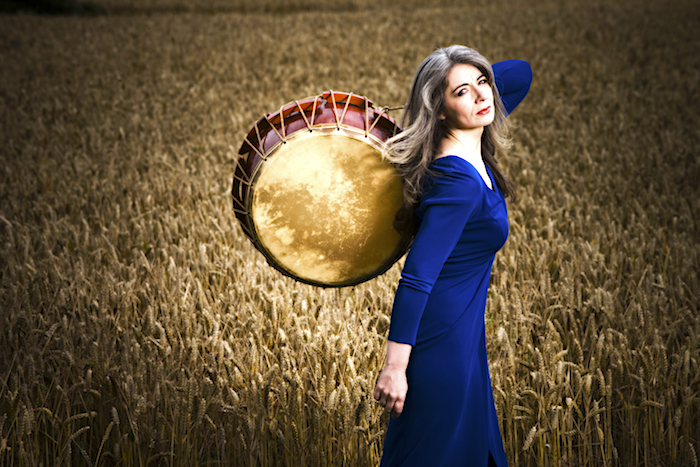 There’s a fascinating story online that Evelyn Glennie feels that deafness is largely misunderstood by the general public. She explains how she taught herself to hear with parts of her body other than her ears. In response to what she described as “mostly inaccurate reporting by the media”, Evelyn Glennie published a book called “Hearing Essay” in which she discusses her condition. She. also discusses how she feels music in different parts of her body in her TED (Technology, Entertainment, Design) talk “How To Truly Listen”, which was published in 2003.

In their introduction, the TED people said: “Dame Evelyn Glennie’s music challenges the listener to ask where music comes from: is it more than simply a translation from score to instrument to audience?”

She was featured on Icelandic singer Björk’s Telegram album performing the duet “My Spine”. And, in her time she has collaborated with many different musicians including former Genesis guitarist Steve Hackett, Mark Knopfler, Bela Fleck, Fred Frith, and The King’s Singers.

In 2002 Evelyn, Julian Lloyd Webber, Sir James Galway, and Michael Kamen formed the ‘Music in Education Consortium’ together. After persistent and successful lobbying, at the end of 2007, the UK government told us they would be donating no less than £332 million for music education. 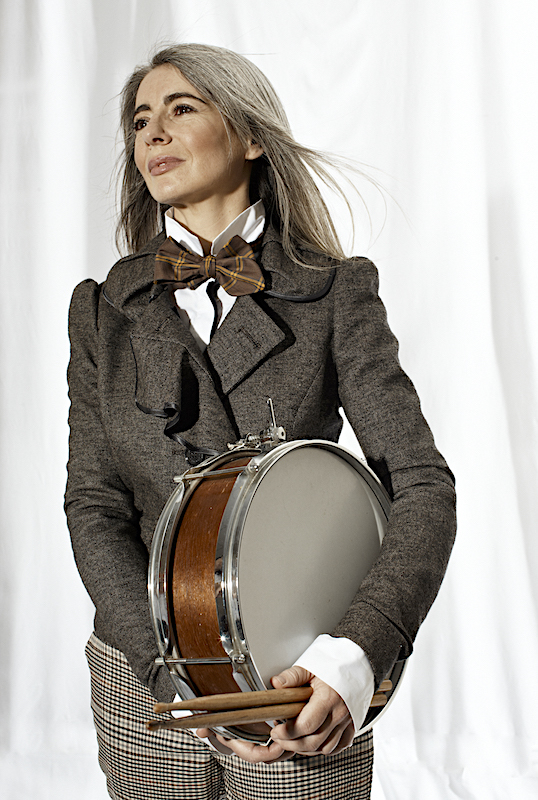 Evelyn Glennie appears to be the first person in the history of music to successfully both make, and sustain, a full-time career as a solo percussionist. She is constantly defining what she can actually do with percussion. By combining technique, an appreciation of the visual and her astounding musicality. It has been said: “Evelyn creates performances of such vitality that it has been said they constitute a new type of performance”.

I came across a piece which noted “She performs with the greatest conductors, orchestras, and artists. For the first ten years of her career virtually every performance she gave was in some way a first – the first time an orchestra had performed with a percussion soloist, the first solo percussion performance at a venue or festival or the world premiere of a new piece.”

I bumped into her frequently when I was involved with Arbiter at the time when as a classical percussionist she expressed an interest in Arbiter ‘AT’ drums and their revolutionary single screw tuning system. As I recall she was also impressed by the sharp sound of the narrow Flats ‘Pro’ snare drums.

I don’t seem to move in those circles so much anymore so I’m slightly ashamed to admit the last time I saw her was at the Olympics in 2012.

Incredibly, Evelyn seems to be able to do it all. She’s commissioned no less than one hundred and forty three (to date) new works for solo percussion from many of the world’s most eminent composers. She also composes and records music herself for film and television. Her first high quality drama produced a highly original score which got her nominated for a British Academy of Film and Television Arts award (BAFTA). 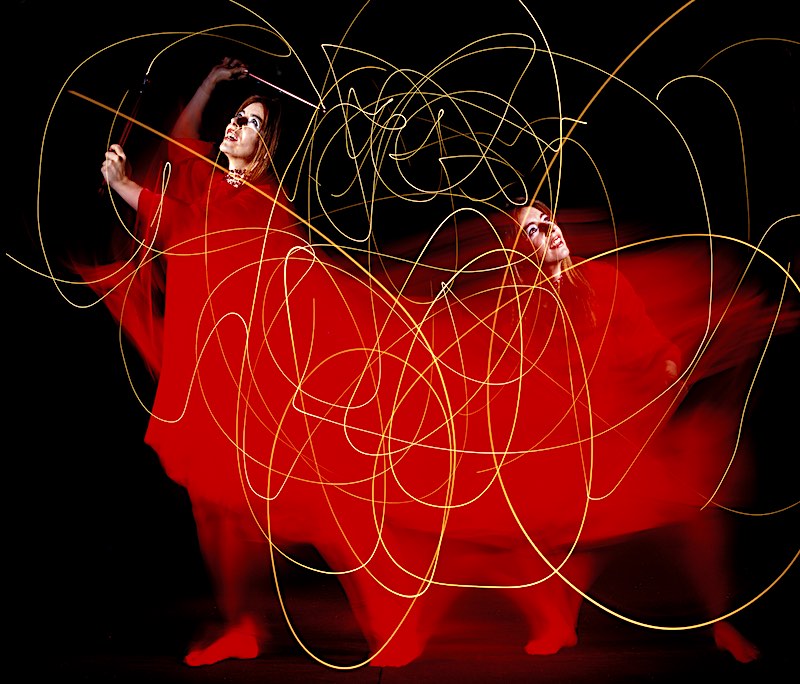 Evelyn’s recording career has been nothing short of fabulous as have her composing and performing careers. Her first CD,which was a recording of Bartok’s Sonata for two Pianos and Percussion, resulted in a Grammy nomination in 1988. This was followed by more Grammy nominations until she eventually won one in 2002. This was for a collaboration with Bela Fleck for Sony Classical.

Outside of actual playing there’s also ‘Brand Evelyn Glennie’ which constantly explores other areas of creativity.like writing a best-selling autobiography, “Good Vibrations”, to collaborating with the director Thomas Riedelsheimer in a film called ‘Touch the Sound’ . She has presented two series of her own television programmes for the BBC, and regularly appears on television around the world, including The Letterman Show, Sesame Street, The South Bank Show, Songs of Praise, Commonwealth Games Festival Concert, This is Your Life, 60 minutes, PBS Profile, and lots more.

She certainly doesn’t sit on her hands when she’s not playing and her extra curricular activities include lobbying the Government on political issues as diverse as music education and parking-rights for motorbikes!

Somehow she finds time to squeeze in some private teaching which allows her to explore teaching and sound therapy as a means of communication.

It was in 1993 that Evelyn was awarded the OBE and she was later elevated further to ‘Dame Commander’ for her services to music. Otherwise, she has at least 104 awards and honorariums including numerous Doctorates and a little something from Scotland prosaically called ‘The Tartan Clef’ which has traditionally been awarded to the likes of Billy Connolly and The Bay City Rollers.

Many thanks to Cheryl Davis (@ www.evelyn.co.uk) for the assistance with the photos in the article.