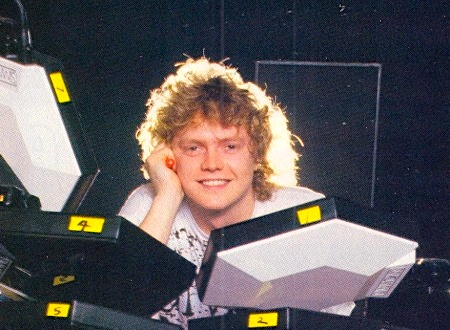 I first came across Rick when he used to come into my Drum Store in London in the late 1970’s, even though he was actually living in Yorkshire at the time. This would have been when he was 15 and not long before he and Def Leppard began to make extremely large waves around the world.

Richard John Cyril Allen, was born on the first of November 1963 and has played drums for Def Leppard since 1978. He overcame the loss of his left arm in a car accident in 1984 and transformed something which was tragic and horrifying into something inspiring.

The story at the time was that after the accident, Rick himself was somewhat sceptical about continuing playing, but the rest of the band weren’t. As I heard it at the time, they said if he didn’t continue with them they would stop too.

So, Rick worked out a way to play using a kit of mostly electronic drums and continued to play with the band.  Def Leppard went from strength to strength and moved into what turned out to be their most commercially successful phase. Rick is known as “The Thunder God” by Leppard  fans and is ranked in the top twenty wealthiest drummers, and also No. 7 in the UK in ‘The Greatest Drummers of All Time’ list. 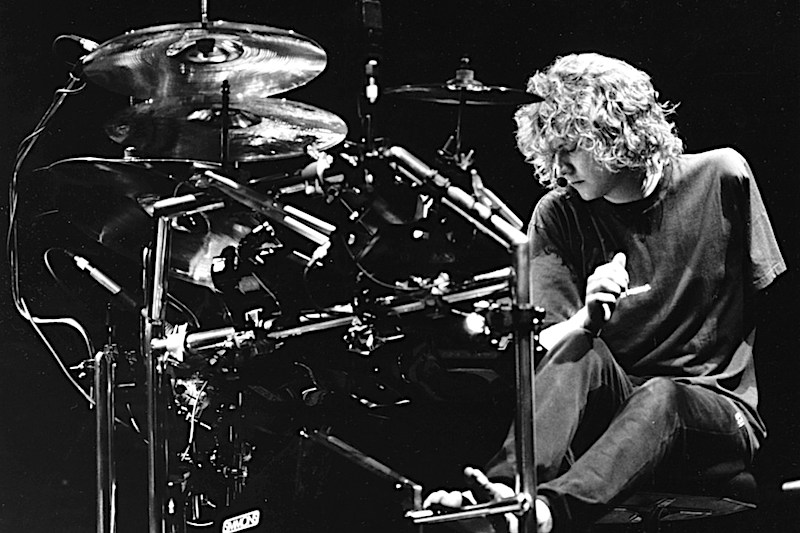 Rick Allen was born in Dronfield, Derbyshire which is not to far from Chesterfield with its crooked church spire. His parents were Geoffrey Allen and Kathleen Moore, and their young son began playing drums at the age of nine. He was given permission to have a drum kit providing he paid half of the asking price for it. The other proviso was he had to have drum lessons. Before ‘the big one’, he played in several bands such as Grad, Smokey Blue, Rampant, and The Johnny Kalendar Band.

When he was 14, Rick’s mother answered an advert on his behalf with a band called Def Leppard (or maybe they were then still spelling their name ‘Leopard’) who were looking for a drummer to replace a guy called Tony Kenning (“Leppard Loses Skins” was the advertisement’s headline). Rick later joined the band on November 1st 1978, which was his 15th birthday. In 1979, he dropped out of school to concentrate on a career in music. Allen evidently celebrated his 16th birthday with a performance at the Hammersmith Odeon, when Def Leppard opened for AC/DC. 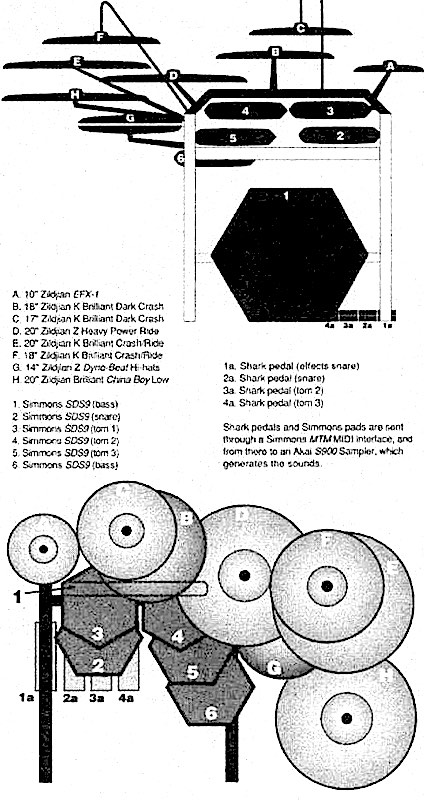 For those of you unfamiliar with the tragedy, on the afternoon of 31st December 1984, Rick was involved in a car crash on the A57 road near Sheffield. While trying to pass another car at a high speed, he lost control of his Corvette, hit a dry stone wall and crashed through it into a field. Rick’s arm was severed, and although doctors managed to reattach it, they were later forced to amputate it because of infection.

Despite this, which would have finished most drummers careers, and after some persuasion, as mentioned earlier, Rick decided he wanted to continue playing drums with the band and set about working out how to do it.

The band took a sabbatical from onstage performances until August 16, 1986, to give Rick time to develop his playing again, and they returned at the Monsters of Rock festival at Castle Donington.

Rick adopted a specially-designed electronic drum kit which the British e-drum company Simmons had a major hand in. If memory serves correctly, he used four Shark pedals under his left foot to replace his left arm (triggering closed hi-hat, bass drum, snare drum and a single tom sounds), all going into a couple of Simmons MTMs which could route the trigger data from the pads anywhere, triggering fully loaded SDS7 modules which were loaded with EPROMs (chips) which had been ‘blown’ (programmed) with the drum sounds off the albums. This was so far ahead of its time that for many years Rick’s set up was totally unique, and he helped encourage drummers to use more electronics live.

The customised kit developed over time, and Rick will now use a kit with a more even balance of electronics and acoustic drums and cymbals, depending on what is required.

I interviewed Rick for International Musician not too long after the accident and have looked everywhere for the copy I wrote for it, to find out what he thought then and exactly what Simmons  drums he was going to be using. Unfortunately, I can’t find anything anywhere. I was certain I had a computer in those days… but maybe I was still scribbling on a lined pad … or was it a slate?

Rick Allen and his wife Lauren Monroe are the co-founders of the Raven Drum Foundation charity. Rick formed the One Hand Drum Company and to provide funding for the company primarily sells merchandise featuring “Stik Rick”, an illustrated character representing Allen 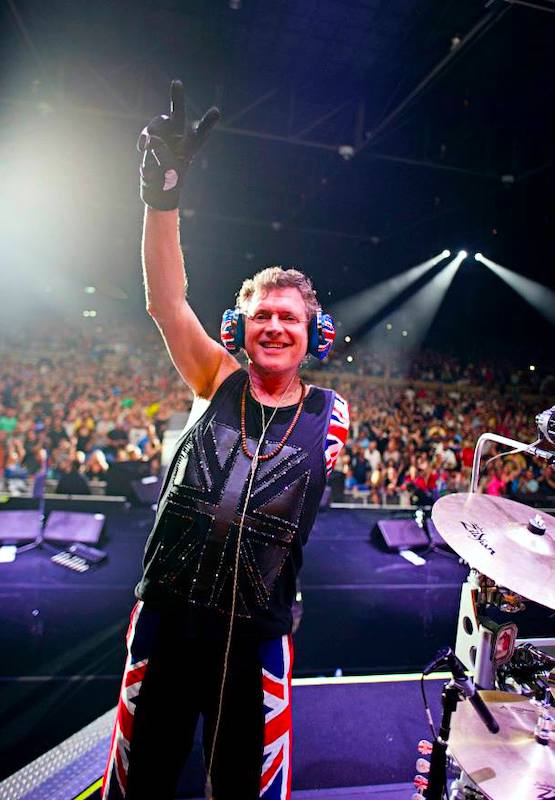 I read something on a drummers website which said:

“Other bands would have dumped and replaced the lowly drummer immediately. Both Rick and Def Leppard have shown commitment, comradeship, loyalty and patience in the long term to overcome life’s bad experiences.”

When it comes to band success, Def Leppard have had more hit records than you can shake a stick at. So far they’ve sold 100 million records, including two Diamond records denoting sales of 10 million. The band’s greatest commercial success came in the decade between the early 1980s and the early 1990s. It was their third album, ‘High and Dry’, which was their first to be produced by Mutt Lange which really started to change things. He helped them to define their highly successful melodic, hard rock style. The album’s most popular track ‘Bringing On the Heartbreak’ became one of the first rock videos played on MTV in 1982.

The next studio album ‘Pyromania’ came out in 1983, with ‘Photograph’ and ‘Rock of Ages’ both topping the US Rock Tracks chart. ‘Pyromania’ went Diamond in the States and 7x platinum in Canada. 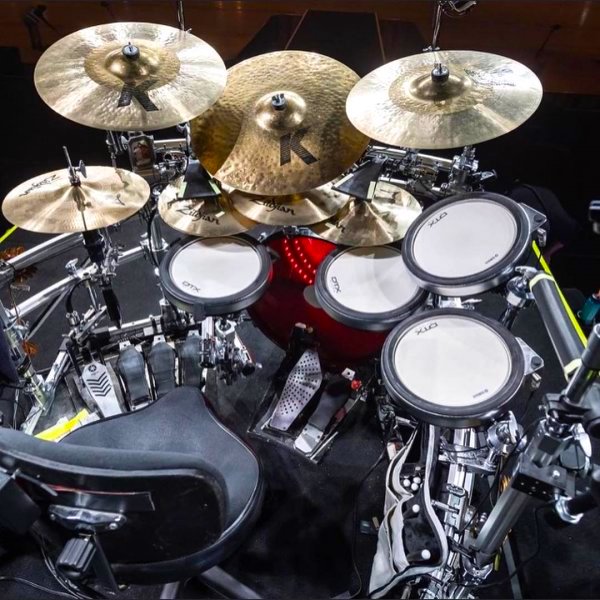 Def Leppard’s fourth album in 1987 was more pop-orientated and called ‘Hysteria’. For those interested in superlatives it topped the UK, US, New Zealand, Canadian, Australian and Norwegian charts. It also went to No. 2 in Sweden and No. 10 in Germany without any Top 50 singles in those countries. It has ultimately been certified 12x platinum for sales in the US and 13x platinum in Canada, selling over 25 million copies worldwide. This makes it one of the best-selling albums of all time.

Their next studio album, ‘Adrenalize’ got to No.1 in the UK, and was followed by ‘Retro Active’. Then there was their greatest hits album ‘Vault’, released in 1995. It reached the Top 10 in several countries, as well as going 5x platinum in the US.

Beginning with ‘Slang’, Def Leppard released five albums between 1996 and 2008. Their most recent eponymous album, was released in 2015 and once again did rather well everywhere, but they also have released one compilation, two live albums, 2 EP’s, and 6 box sets since 2015 as well. 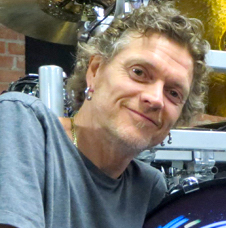 In 2009, Yamaha announced the addition of Rick to their artist roster. He is currently using Live Custom acoustic drums with DTX electronics and pads. He uses Remo drumheads (usually coated Ambassadors on his acoustic drums and clear Powerstroke 3’s on his bass drums). His cymbals are Zildjian cymbals, mostly K customs, Z Customs and A customs, and he uses an LP Rock cowbell.

And to round it off nicely, Rick Allen and Def Leppard were inducted into the Rock and Roll Hall of Fame in 2019.