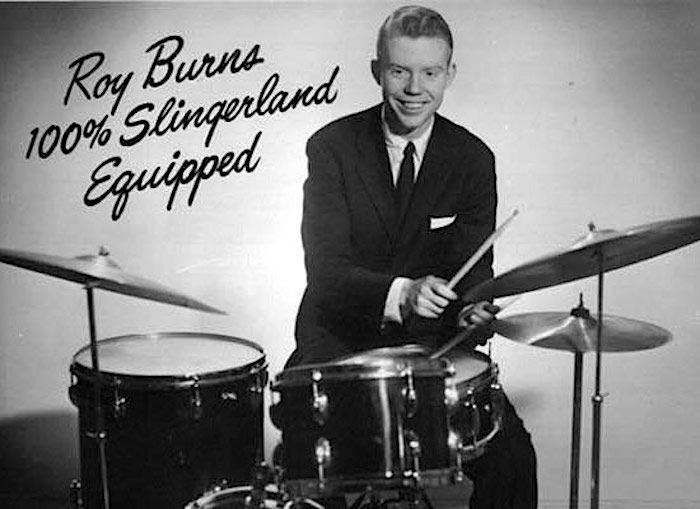 Roy Burns came from Emporia, which is in Kansas and around a hundred miles from Kansas City. Roy was one of the very few players who built a career which encompassed just about every aspect of drumming and the business of music. He was not only a big-band drummer, but also a teacher, author, clinician, studio drummer, publisher, and ultimately one of the owners of Aquarian Drumheads. Incidentally, I always assumed that Aquarius must be Roy’s birth sign, but if you look at the top of the page you’ll see it’s not true. If you want to be pedantic about it, he was actually more of a Sagittarius.

He started taking drum lessons when he was just seven from the head of the music department at Emporia State College who gave him some really good advice telling him: “It’s not just about having good hands, you have to use your noodle!” From here Roy moved on; firstly to having lessons with a local dance band drummer, then to a guy called Jack Miller in Kansas City.

At the age of 20, he was given some advice by Louie Bellson who, having heard him play, said Kansas wouldn’t help his career. He suggested he upped sticks (no pun intended) which Roy did, and he left it behind to study drumming in New York with Jim Chapin, Sonny Igoe and Henry Adler. Within a year, after studying at Julliard, he landed the gig as Woody Herman’s drummer and Roy soon became famous as a big band drummer. While still in his early 20’s he played with Benny Goodman, Lionel Hampton, and in 1958, Woody Herman. 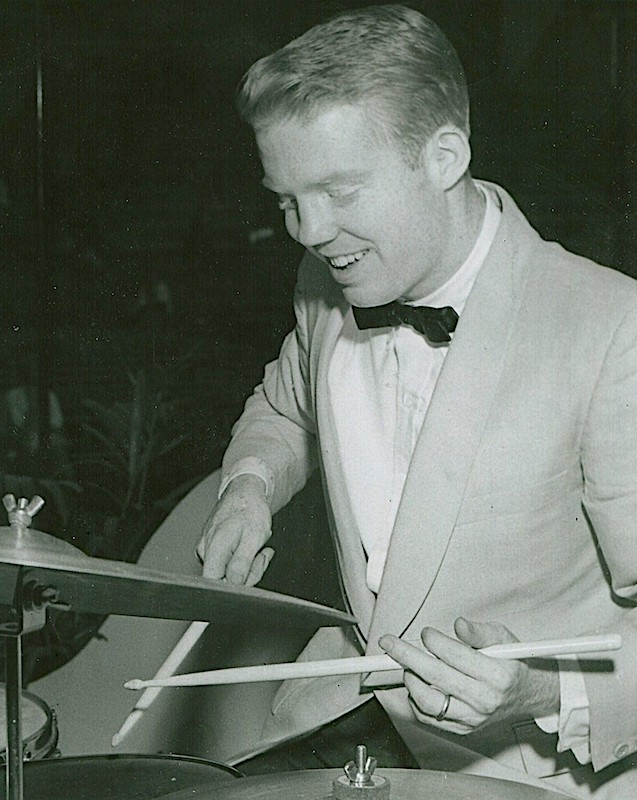 In the ’60s, he worked in recording studios and freelanced around New York. Like many of his drumming contemporaries, he also played for several of America’s top TV shows including the Merv Griffin Show and the Tonight Show. As well as all this, Roy also did TV and radio commercials. He also led his own jazz group and performed frequently at prestigious New York clubs such as The Metropole and Birdland. During this time Roy was also in demand as a teacher.

It was from this teaching that Roy was inspired to write a number of what could certainly be described as ‘Classic’ instruction books. They include “Finger Control”, “Elementary Drum Method”, “Advanced Rock Drumming”, “New Orleans Drumming” and “One Surface Learning.” This brings us to an anomaly with his name because they’re not all attributed to Roy ‘Burns’. He started out as ‘Burnes’, then somehow became ‘Burness’ as far as the authorities were concerned whereupon the IRS suspected he was somehow scamming them and suggested he simplified it for everybody by changing it, once and for all, to ‘Burns’.

Roy started out playing and endorsing Slingerland drums but it was Ben Strauss from the Rogers drum company who pushed him in the direction of becoming a clinician for them. Roy was already an endorser but Rogers wanted more from him and he decided to go around the world for them talking about their drums, as well as drumming and drummers. He also found time to tell a few jokes! His set of choice measured 22 x 14”, with 13 x 9” mounted and a couple of 16 x 16” floor toms and a chrome on brass 14 x 5” Dynasonic snare drum. 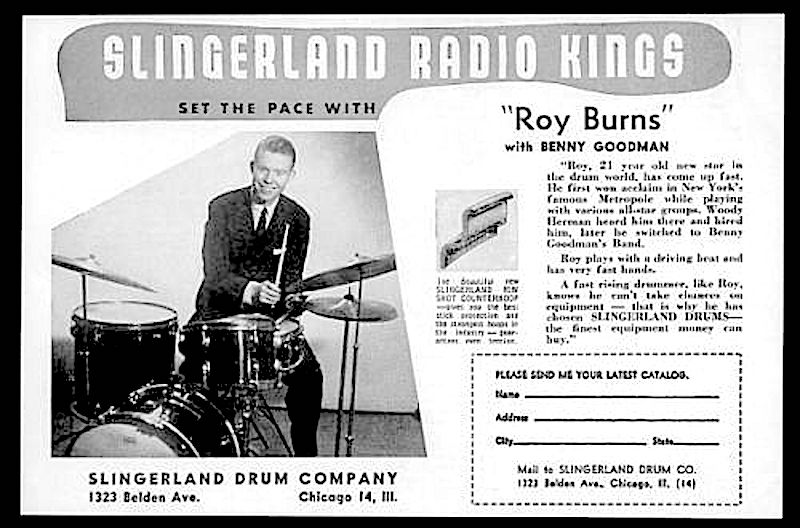 Roy was certainly involved with the Rogers Memriloc mounting system, although I’m not convinced he had such a big hand in Series II, Rogers’ futuristic plastic set, which was spectacularly unsuccessful (unless you were a very serious collector). Series II might have had something to do with the demise of the company, certainly it didn’t help and we’re told Roy wasn’t exactly impressed by it.

According to people who know these things, like Not So Modern Drummer and George Lawrence, Roy was one of the first artists to conduct drum clinics and is more or less credited with pioneering the concept. Certainly this was where I first caught sight of him in London in what must have been the mid-sixties.

His background as a drummer, teacher, author and studio musician made him an ideal educator and performer. It’s not difficult to believe a Roy Burns drum clinic was the first one attended by many young drummers both in the U.S. and Europe. He was also the first American drummer to present clinics outside the U.S. He turned up in any number of countries such as Australia, Ireland, Hong Kong, and Denmark. In the UK you could pretty much count on him being at a music show . He more or less set the bar as far as today’s drum clinicians are concerned. 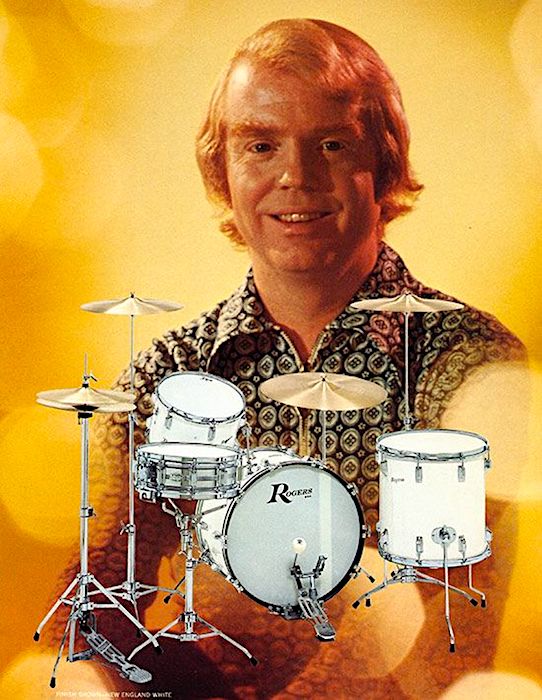 During the ’70s, Roy was also the ‘house’ drummer for the Monterey Jazz Festival and backed some of the greatest names in jazz. Guys like Gerry Mulligan, Billy Taylor and Dizzy Gillespie and many other illustrious artists were all given the benefit of his impeccable accompaniment.

In 1980, Roy began writing a column in Modern Drummer Magazine. A great many drummers read his ‘Concepts’ column in MD Magazine. It was evidently one of the most successful columns in the history of the magazine and went on for 12 years.

On June 13, 1980, Roy, along with a guy called Ron Marquez, first formed The Aquarian Accessories Company before eventually focusing on drumhead production. Roy’s experience in music and drumming, combined with his partner’s extensive engineering and manufacturing background, helped to build an innovative company dedicated to helping drummers play music. On January 1, 1987, Aquarian first introduced their drumheads to the world. Their first product had been their Cymbal Spring which attached to the tilter and allowed the cymbal to bounce and swivel without exerting too much pressure on the bell. This was in 1980 and I thought it was such a great idea that I used one for years and it’s cleverly hidden somewhere in my outbuildings. 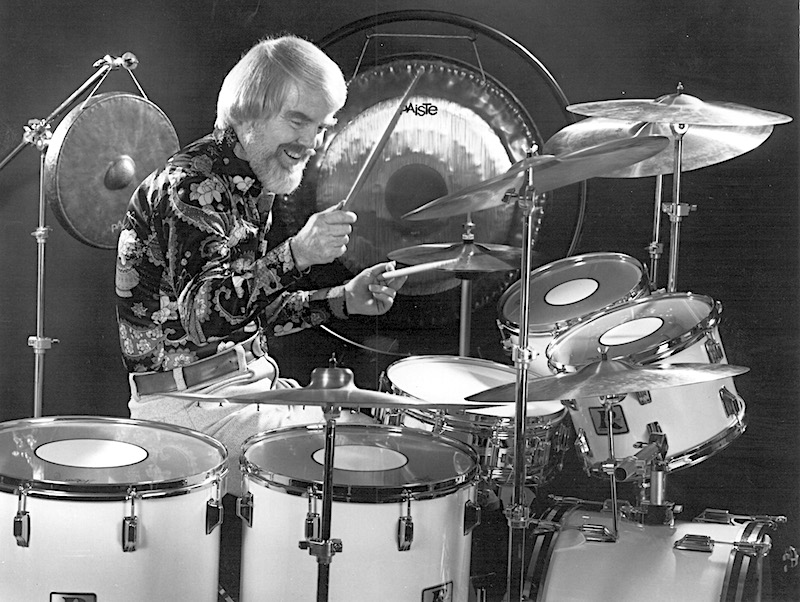 Seemingly, Aquarian heads were successful in a pretty short time because of innovative ideas and unique products of superior quality. As Roy himself put it, “In everything we do, we keep the drummer in mind. We focus on helping the drummer attain a musical sound and achieve a better performance.” They went out of their way to emulate the shape and contours of a calf skin head and they succeeded. Aquarian were ahead of the curve and besides single and double-ply heads they also produced triple-ply versions.

He was no slouch and some of Aquarian’s innovations he helped to develop include their ‘Safe-T-Loc’ patented hoop which prevents de-tuning and the film pulling out; and their ‘Sound Curve’ collar design which allows their drumheads to seat automatically and reduce tuning problems. 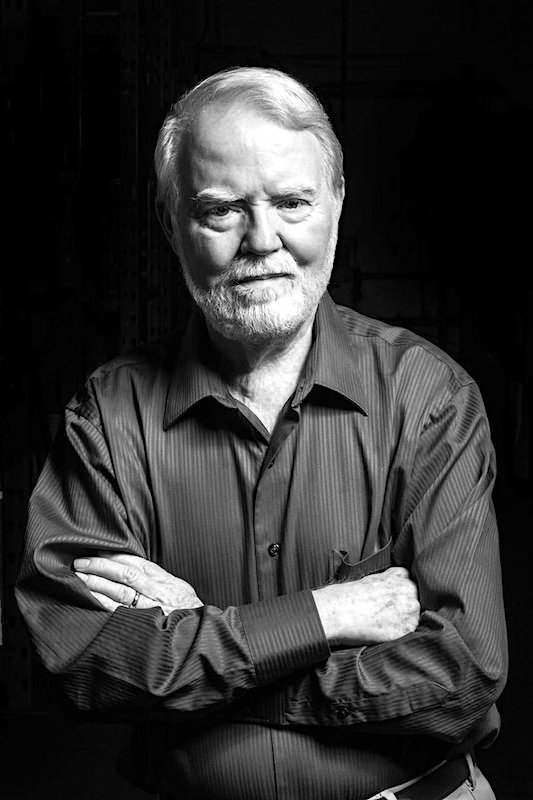 As George Lawrence from ‘Not So Modern Drummer’ put it in Roy’s Obituary, “Roy Burns dedicated his life to drums and drummers. The drumming community owes this gentleman a huge debt of gratitude”.

He went on to say:”The first drum clinic I ever attended was given by Roy Burns at my junior high school in Jackson Mississippi in the late sixties. Needless to say, I was thrilled at Roy’s solos and what he had to say was inspiring. Roy practically invented drum clinics. As a player, I was an Aquarian drum head endorser and I was also an Aquarian dealer and sold a lot of Roy’s heads and other products at my drum shops. Roy’s life and career is inspiring. When he got older, I asked him what was his secret to working at such an advanced age. He said, “I always leave work at 3:30”. He was always quick-witted and loved hanging with and talking to drummers. He understood the “Drummer Community – the brotherhood and sisterhood and family of drummers” – long before a lot of us did. He helped to create that attitude among drummers – not as competitors but as comrades in arms – all of us slugging it out in the trenches together – and understanding each other. And he always treated everyone the same – with sincerity, honesty and genuine interest in drummers as personal friends. I am just now realizing how much he influenced me in that way. And of course he played his ass off. He was a role model for drummers and for drummers in the music industry”

RIP Roy Burns. You certainly raised the bar as far as drum education was concerned.