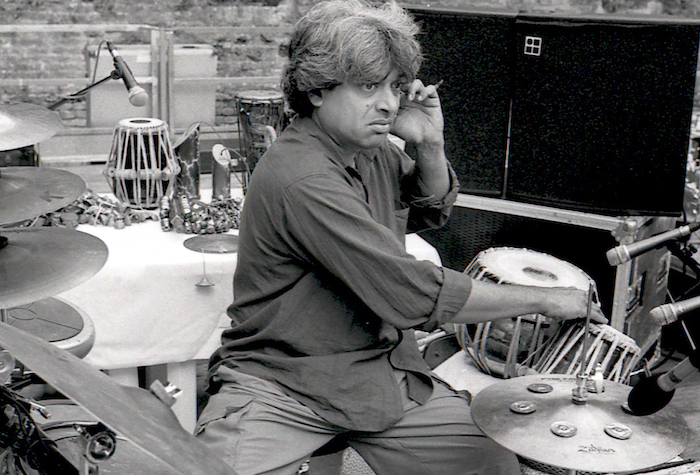 Trilok Gurtu was born in Mumbai, India on 30 October, 1951 to Hindu Bramin parents. This was at a time when the city was still called Bombay and it wasn’t until a quarter of a century later, in 1996, that it was changed to its more ethnic, less colonial name.

Trilok was born into a family of musicians. His mother was a singer who also played various Indian instruments – as did his father and brother. It seems everybody in his family could play including his grandmother. He went to tabla lessons from a chap called Shah Abdul Karim to learn how to be an accompanist, although it seems he could have learned to be a soloist – and there is a definite difference. He was educated in Mumbai at Don Bosco High School which is a fee-paying Catholic College.The list of previous alumni includes famous people like cricketers Farokh Engineer and  Ravi Shastri, actor Shashi Kapoor and a great many medical specialists.

Actually, speaking of actors, Trilok’s brother was part of the Bollywood scene which is of course based in Mumbai and evidently had his own Indian instruments which Trilok would borrow when he needed them, at a time when he didn’t have any of his own.

Once he got into his stride he played everywhere he could. From the age of six he was using the sub continent’s version of ‘pots and pans’ to get started – like a great many of our other ‘Groovers and Shakers’ subjects.

Some time later his studies took him to Berklee College in Boston where he stayed for a while, but some accounts I’ve read say he wasn’t enamoured with it, and had this to say:

”Before we train our hands, we should tune our ears to good music. Listening is the first lesson”. 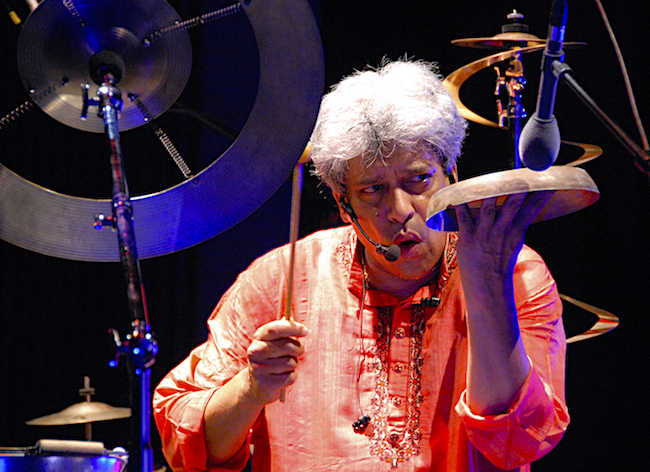 Trilok is invariably described as a world class, virtuoso percussionist. He’s now in his  seventieth year, and in his time has played with an equally world class bunch of collaborators during his long recording career which began in 1978. So far this has resulted in in excess of 20 of his own albums.

Internationally he started with a trio led by John McLaughlin, with Charly Antolini and Jonas Hellborg. Trilok was their featured soloist for 4 years, before going on to play with other jazz greats including Joe Zawinul, Jan Garbarek, Don Cherry, Bill Evans, Pharoah Sanders and Dave Holland. Naturally all these guys were justifiably  impressed by Trilok’s unique sense of rhythm.

The list of extremely diverse artists he’s played with could fill up this piece on its own.  I’ll give you a taste of two:  Gary Moore, and Simon Phillips!

Trilok’s roots are deeply embedded in traditional Indian music, so it is no surprise to see that collaborations also took place with what one interviewer called: “the illustrious glitterati of Indian musical society:  his mother, Shobha Gurtu, Zakir Hussain, L. Shankar, Shankar Mahadevan, Hariprasad Chaurasia, The Misra Brothers and Sultan Khan”.

‘World music’ has become an established genre in which Trilok has done his own thing to great effect, performing and recording with Salif Keita, Oumou Sangare, Angelique Kidjo, Neneh Cherry, Omara Portuondo, Tuvan throat singers, Huun Huur Tu, to such effect that Rita Ray, a presenter and DJ from the BBC’s World Service Radio, described him as “a serial collaborator”.

At the beginning of the seventies when I was with Argent,  I’d toured America with the Mahavishnu Orchestra which of course among others contained Billy Cobham and John McLaughlin. I’m guessing one of these guys advised Trilok (since he was searching for new sounds for his drum ‘kit’) to come into my Drumstore in Wardour Street which he did. This would have been in 1981 when he was looking for interesting drum sounds to add to what had become his highly unusual drum ‘kit’ which included a bass drum. 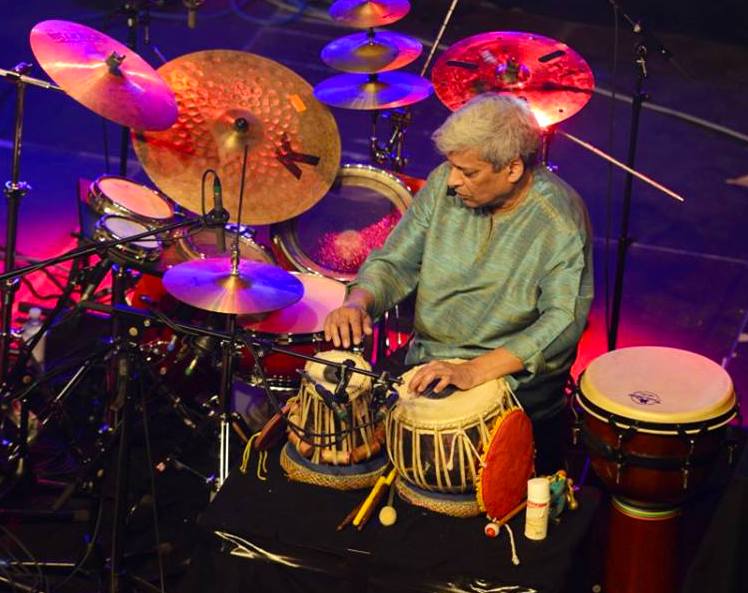 Trilok with his Fantoms (rear and left of picture)

As it happened he was in the right place at the right time, because the driver of one of those cranes with outriders which often hold you up on the motorway, had just invented some. His name was Len Bailey and after repairing some ethnic drums, had just come up with the concept of what he called ‘Fantoms’ –  drums with shallow resonators inside, and Henrit’s Drumstore were the wholesalers.

Trilok really liked the sound of them and took as many drums as he could get, which from online photos  I’ve studied recently it seems he still uses forty years after the event. I had a set which I used for gigs I was travelling to, where space was at a premium and I think Trilok eventually wrestled those from me too. The company was called ‘Melanie’ and made a triple drum called or ‘Tri-Fantom’ (but usually shortened to Tri-Tom), with three different sized heads – 6”, 8”, 10” – all mounted in a metal tray, but also some larger single drums. Trilok was much taken with them all.

Trilok was also the driving force behind  ‘Twenty Years of Talking Tabla’  a one-man event which focussed on speech and tabla. This was interesting in that it allowed intimate  audiences to exchange musical views with him and learn more about his compositional techniques.

As I intimated, the Gurtu family was a highly musical one. His grandfather was a noted Sitar player and his mother Shobha Gurtu, a classical Indian singing star and of course a constant influence on Trilok. Sources say he began to play from the age of six: practically from infancy. Eventually Trilok traveled to Europe, joining up with trumpeter Don Cherry (father of Neneh and Eagle Eye) for two years; touring worldwide with ‘Oregon’, a highly respected jazz group and was an important part of the quartet that L. Shankar led with Jan Garbarek and Zakir Hussain.

In 1988 Trilok performed with his own group, finally being able to present his own compositions on the debut album ‘Usfret’ which many musicians see as an important influence.  Young Asian musicians from London like Talvin Singh,  Asian Dub Foundation and Nitin Sawhney see him as having a huge effect and this meant Trilok’s work found its way into dance clubs years later. It was then that Trilok met The Mahavishnu Orchestra and John McLaughlin. As I said for the next four years he played an integral part in that McLaughlin Trio.

Five years later Trilok toured with his own trio to publicise the album “The Crazy Saints” which featured not only Joe Zawinul but also Pat Metheny. Audiences were impressed by his composing skills which linked subtle Indian rhythms and Indian vocals with elements of modern jazz and rock. The following year the band was enlarged to a quartet and touring extended to include a US coast-to coast tour and more than forty European shows. 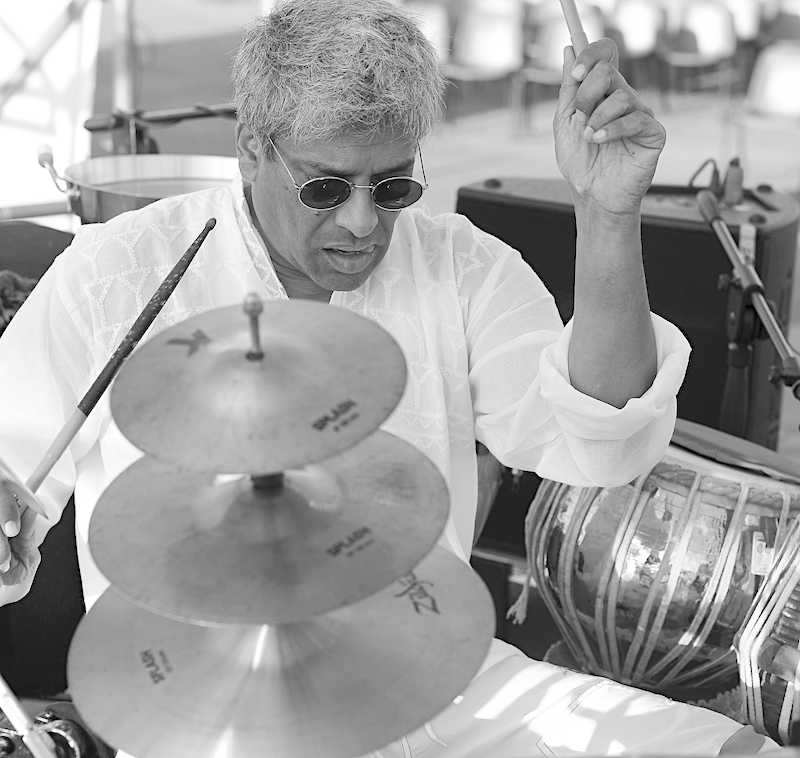 Trilok has toured all over the world and turned out to be something of a humorous  entertainer. By the late 90’s he was on the road touring worldwide and appearing in Festivals where he performed alongside the biggest stars of the entertainment business including Bob Dylan, and Eric Clapton. He was also playing with his friends in World Music like Salif Keita, Youssou N’Dour, Baaba Maa and Cesaria Evora.

Of course Trilok is a composer, player and leader and released ‘Massical’ in 2009 and another piece called ’21’ with Simon Phillips and the NDR Big Band two years later. In 2013 Trilok released ‘Spellbound’ as a tribute to his friend and adviser Don Cherry. The trumpet, which was of course Don Cherry’s main instrument, is featured throughout with many guest appearances by modern trumpeters playing compositions by Trilok, as well as some by trumpeters Miles Davis and Dizzy Gillespie.

There was a time in the sixties when the Beatles were spending a  certain amount of time in India that many drummers (including me) felt they would like to play tablas and decided to explore the technique. Many of us quickly discovered it wasn’t at all like playing bongos and gave up. We simply didn’t have the ‘digital’ dexterity. 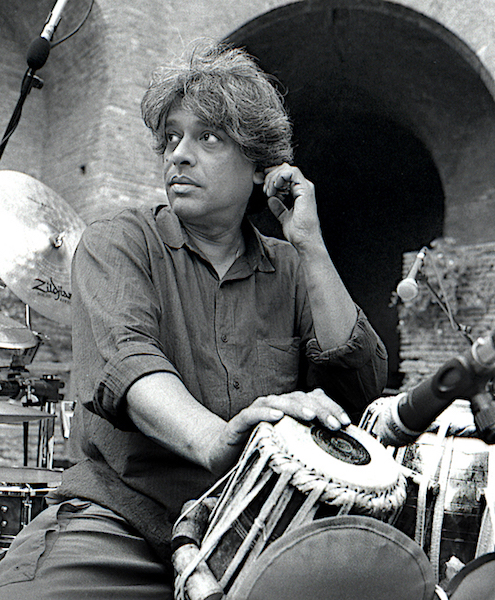 was touring around Kerala roughly 40 years after my first (and last) attempt to play them and decided there had been more than enough water under my bridge, and since they had a guy called Beni teaching in the Mahari Beach hotel near Cochin, felt I’d attempt to turn back the clock and see if I’d learned anything in the interim relative to my drumming career which would help me. Sadly I hadn’t! My  podgy Western  fingers simply wouldn’t/couldn’t help me make the right sound,

But Trilok Gurtu’s certainly can.

The Guardian once described him as:

That works for me. Hear, hear.