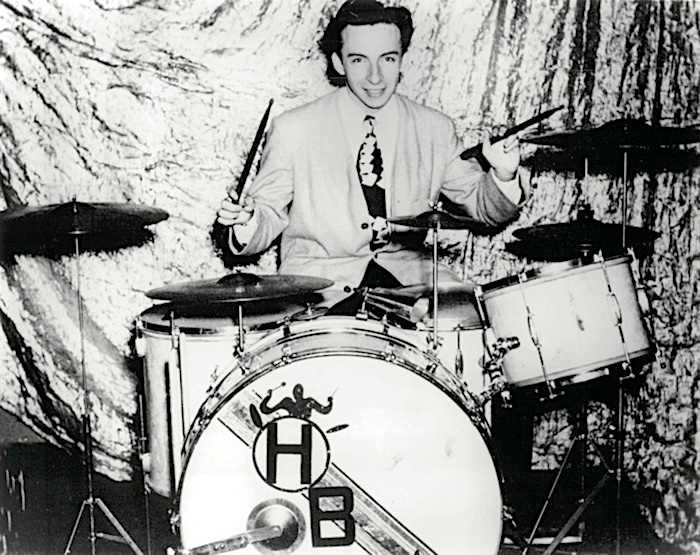 In a previous life I was fortunate enough to be friendly with Herb Brochstein who among other things founded the Pro-Mark drumstick empire. Like a great many American drummers of his generation he was something of an Anglophile and at any overseas trade show I’d head for his stand to renew my acquaintance. We’d sit together discussing our mutual obsession with ‘drums, drummers, drumming and drum shops’ (now there’s a name for a book!).

Like me Herb had started out as a pro drummer who’d decided to move to the ‘dark side’ and open a drum shop. His was called ‘Herb Brochstein Music’ and situated in Houston, Texas.

To set the scene as to why he’s important, sometime around August 1955 he was sitting in his shop at 2211, Chenevert Street when a typically large American car pulled up outside, and out stepped Elvis Presley and DJ Fontana who were playing nearby in Pasadena Texas and for what now seems to be an unfathomable reason were looking for a new drum set. They weren’t taken by anything else in the shop other than Herb’s own jazz set which was sitting innocuously at the back and wasn’t for sale. Elvis liked the look of it simply because of the unshaved calf-skin front head which Herb had fitted to it because he liked the way it thickened the drum’s sound. Eventually Herb’s arm was well-and-truly twisted. Elvis handed over $500 in dead presidents and the guys walked out of the shop with what was to become the world’s most evocative and recognisable drum kit – at least until Ringo’s ‘Black Oyster Pearl’ covered Ludwig came along a decade or so later. Aficionados with the benefit of a magnifying glass will note that above the evocative round Gretsch badge pinned to the small tom there’s a rectangular badge which says: ‘Brochstein’s Drum Shop’.) 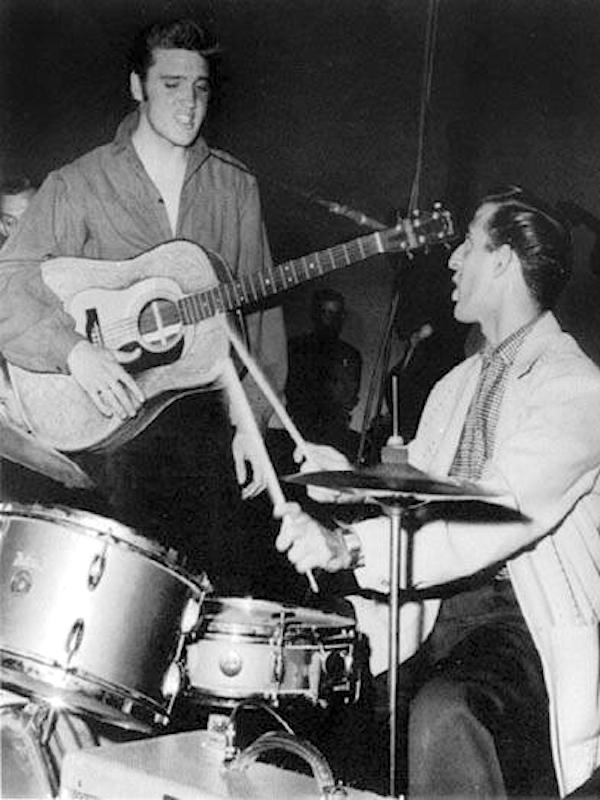 Herb, who really was a proper big band jazz player, thought Elvis was something of a hillbilly and didn’t take him at all seriously until a couple of months later when he opened up Life magazine, and the centrefold picture was Elvis, Scotty Moore, and D.J.on The Ed Sullivan Show—featuring Herb’s old drum set, complete with the unshaven calfskin head on the front of the bass drum.”

Like quite a few others of his ilk, including Remo Belli, Avedis Zildjian and Joe Calato; Irvin “Herb” Brochstein was during his time something of an unsung hero. He was an accomplished big band drummer who became known to the wider music world as the founder of Pro-Mark Drumsticks.

Herb was born and raised in Houston, Texas by Palestinian parents and wanted to play the clarinet but his parents couldn’t afford one. However they could just about afford a single drum which they duly bought for him. Herb was off and running and as he left his High School’s band and grew up relocated to Chicago to study with Bobby Christian at his School for Percussion. While there he met Buddy Rich and this was the very beginning of a lifelong friendship between the two men. He began teaching in Chicago in 1947 and upon his return to Houston Herb opened his very own drum studio. This was in his house on Chenevert Street, right next door to where he grew up.

That teaching studio grew into a full-line music store: Brochstein Music, which sold instruments to schools across Texas. Herb continued to teach during the day and play in a big band almost every night. During the ’50s, he played with Texan saxophonist Ed Gerlach in his big band and also formed his own band: ‘The Gulf Coast Giants of Jazz’. 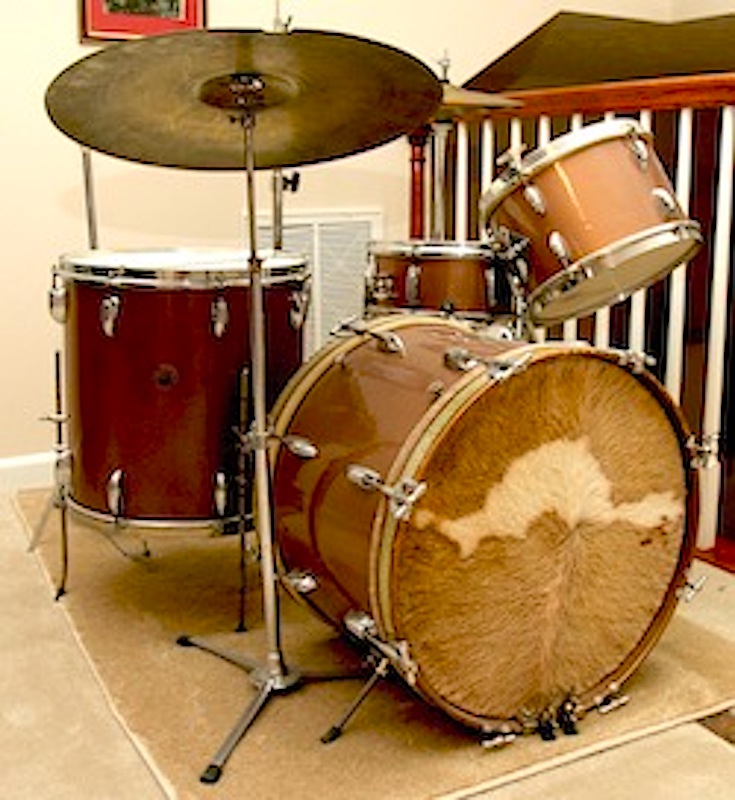 Herb’s kit as it is now

At around this time the store was doing rather well and a jobbing salesman came in and showed him a pair of handmade oak drumsticks from Japan which Herb tried and decided were the best he’d ever used.The balance and feel were perfect. He bought half-a-dozen pairs then found out who was responsible for them and confirmed a deal; all with nothing more than a handshake. The guy who made them was called Tatsuo Kosaka who went on to be the President of Herb’s company now called Pro-Mark. The die was cast and Herb began importing and selling those Japanese white oak drumsticks through Pro-Mark. This was in 1957. The name by the way was based on the phrase: “The Mark Of A Professional”.

The business escalated and eventually grew into one of the largest drumstick companies in the world, selling its products in more than 110 countries. Like many (make that all) principals in the drum world, Herb Brochstein was a tinkerer who would send instructions to the factory in Japan to slightly change the models – lengthen or shorten them, make this one thinner here, make another thicker there; this created the Pro-Mark line.

Herb’s son Maury had this to say:

“Our dad was a true pioneer in the industry. Being a drummer, he was concerned that the quality of drumsticks available during the late ’50s and early ’60s was subpar, so he decided to focus his attention on making the finest-quality sticks in the world. I would consider my dad and Joe Calato Sr. (who invented the nylon-tip drumstick called ‘Regal Tip’) as the true pioneers in the drumstick industry.”

In the beginning Herb’s drumstick sales increased, mostly by word of mouth, and he soon expanded his Houston business to include a factory to make sticks. He seized the opportunity to add hickory and maple sticks to his original offering – those now famous oak models. Mallets, brushes, and other percussion products followed. Pro-Mark was the first American drumstick company to market sustainable Japanese Shira Kashi oak sticks, all from in its 90,000-square-foot facility in Houston, which used state-of-the-art machinery.

The family-run business was purchased from then-president Maury Brochstein in 2011 by D’Addario & Company where it still continues to operate from its Houston location.

“[Herb’s] family was important to him,” adds Bari Brochstein-Ruggeri, who evidently worked at Pro-Mark for nearly two decades, from reception to sales. “But he always had time and a place for drummers, both the famous and the not-yet famous. Drummers from all over the world were part of Herb Brochstein’s extended family, and he passed that caring and respect on to two generations of his own family.” Besides the older guys like Krupa, Rich, Bellson, Morello, Manne and Shaughnessy who were his friends, Herb had time for the newer guys like Phil Collins, Carter Beauford, Neil Peart. Ronnie Vannucci, Liberty DeVitto and Simon Phillips.

Liberty DeVitto was a longtime Pro-Mark endorser and, as I’m sure everybody knows he was the drummer for Billy Joel for three decades. He said:“Herb was a giant. He shaped and changed the drumstick industry forever, and his legacy will continue to live on for future drummers everywhere. Pro-Mark was family, and that’s why I proudly use Herb’s sticks each and every time I play. He created a company that didn’t act or feel like a company. I spent hours listening and learning from Herb and will miss him.” 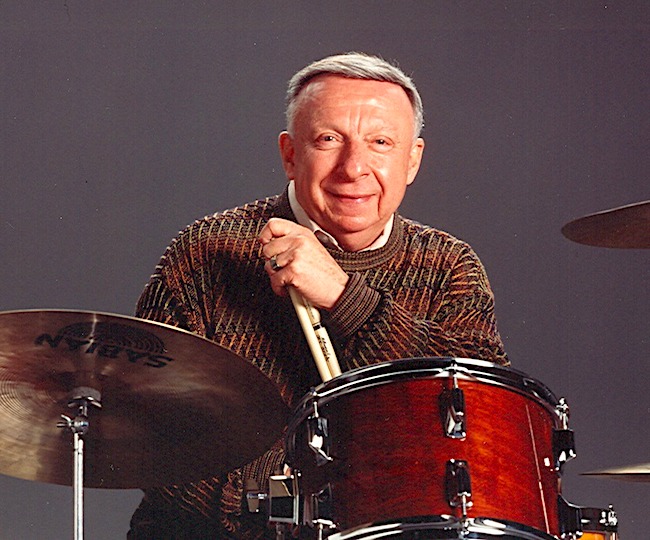 Towards the end of his life Herb Brochstein was featured as a member of the Percussion Originators Ensemble—along with Roy Burns, Vic Firth, Don Lombardi, and Modern Drummer founder Ron Spagnardi—at the 1997 MD Festival – a video clip of the performance can be seen on YouTube; search for “Percussion Originators Ensemble.” He may even have been playing with his longtime favourite stick, the wood-tip Texas hickory 5A, or a more recent favourite, the 733 model designed by jazz great Michael Carvin.

“My experience as a drum set player has been channeled directly into the creation of new drumstick designs,” Brochstein said on the Pro-Mark website, “and it has given me a common language with which to talk to drummers about their own design ideas.”

When Herb began in the fifties, the idea of saving the planet was certainly not uppermost on anybody’s mind. However these days it’s much more important and Pro Mark are leading the way with sustainable woods. Since 2013 they’ve replaced 250,000 trees which were used to make drumsticks. They plant 75,000 seedlings each year and plan to plant a tree to replace every tree they’ve ever used by 2043.

”Sticks made by a drummer, for drummers.”