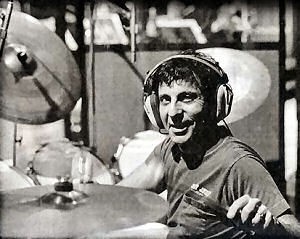 Hal Blaine died on March 11th, 2019 and it’s absolutely the end of an era – there couldn’t possibly be another like him because the World of Music has moved on!

I didn’t really know Hal Blaine the man, although I would have loved to have. I did bump into him at American music shows although unfortunately we never got a chance to talk about drums, drummers and drumming. But what I do know about him is his playing, having during my lifetime played a great many of the songs he made famous and adapted Hal’s drum parts to records I was involved with. (and, like a great many sixties musicians sent them back to America as part of the ‘British Invasion’.) Naturally I wasn’t interested in doing approximations of what Hal played, I wanted to interpret them exactly the same as he did – possibly warts and all. Having said that, you would struggle to hear any mistakes in his drumming, although of course, as with all the best session players, there may have been some happy accidents!

He was born Harold Simon Belsky on February 5th, 1929 the son of Russian/Jewish emigrants and is generally accepted as being the most recorded drummer of all time. But to put it into sharper perspective, it’s more accurate to call him the most prolific ‘popular’ music drummer.

His birthplace was Hollyoke, Massachusetts (which is just a short distance from Springfield) and not far from Hartford, Connecticut where he moved to at 14. It was here on America’s East-Coast that he began his musical career playing and mixing with Vaudeville artists alongside the rhythm and blues music produced by many of the musicians in his neighbourhood. It was at this time that he got to see artists like Glen Miller, The Dorsey Brothers, Woody Herman and Lionel Hampton. Like many before (and after) him Hal moved with his family to California at 14, firstly to Los Angeles, then to San Bernardino. His sister bought him his first drum set and he played it in the band at High School but at 16 he dropped out. He joined the US army and enlisted in the band before being sent to Korea. Here he played in an officers’ band as well as being a medic.

He was discharged f 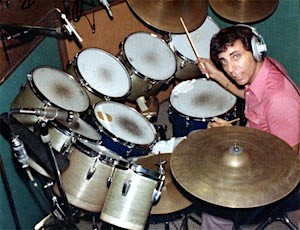 rom the Military at around 30 years old and turned professional with The Stan Moore Trio in 1948. He played and sang with this band and found himself working in Alaska. He stayed there for a year before moving to Chicago to take lessons in harmony, arranging, sight-reading and of course drumming and percussion from the great Roy C. Knapp who just happened to have taught Hal’s favourite drummers. He stayed in the ‘Windy
City’ for a year or so and when he wasn’t studying he played drums in strip clubs from 8pm to 4am. His next move was back to San Bernardino.

In 1957 he was discovered playing in a jazz trio in Hollywood and offered a completely different and portentous gig which he accepted. He found himself playing with The Raiders who backed a teenage heart-throb singer and actor named Tommy Sands who was from Chicago which was of course where he’d been studying drums under Roy C. Knapp; who had taught Gene Krupa, Buddy Rich, Davey Tough and Don Lamont all of whom just happened to be his heroes. He was there at the same time as Buddy Harmon and stayed for a couple of years. 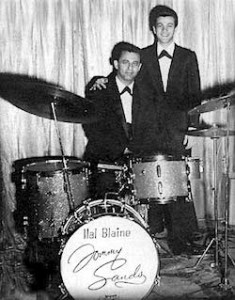 nt Basie. Sonny Payne became ill and Hal took over. He was evidently familiar with all the songs and could read the charts. He made such a good job of it that Basie actually offered him the ‘dream’ gig with his orchestra but Hal decided he couldn’t leave Tommy Sands. His next gig was with Patti Page who had sung with Benny Goodman but who was now making it on her own with hit records like “The Tennessee Waltz”.

Earl Palmer was making it big in Los Angeles before Hal so he was able to smooth the way for him a little by recommending him. In reality Hal was a big band/jazz drummer playing but playing rockabilly music with Tommy Sands did him a favour and got him ready for his new career. So much so that in 1961 he recorded with Elvis on “Can’t Help Falling In Love”.

This piece could simply consist of a massive list of the 35,000 records Hal’s played on (150 of which were top 10 hits and 40 Number Ones), and the artists he’s played with. But we don’t do that here at mikedolbear.com – we endeavour to be more erudite than that.

Something I did discover is that Hal’s unbeatable (?) record is having played 26 recording sessions in a single week! For those of you unfamiliar with the nuts and bolts of Hal’s type of recording sessions, they last for three hours and I’ll leave you to find a calculator to work out the enormity of this prodigious feat when you factor in the consideration that he invariably had to travel to another studio for the next session!

Hal’s claims to fame are numerous, as were his Grammy awards. He played on six consecutive ‘Records of the Year’: “A Taste Of Honey”, “Strangers In The Night”, “Up, Up And Away”, “Mrs Robinson”, “Aquarius/Let 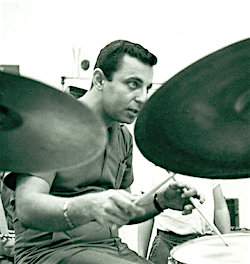 The Sunshine In”, and “Bridge Over Troubled Water”.Couple that with “Everybody Loves Somebody”, “Help Me Rhonda”, “God Only Knows”, “Mr Tambourine Man”, “Eve Of Destruction”, “Good Vibrations”, “ Something Stupid”, “Top Of The World”, “Close To You”, “Crackling Rosie”, “The Way We Were”, then you have a recipe for a prolific career.

I’ve been through the list and struggled to find a style he favoured. It would appear that Hal Blaine just played for the song and the music whatever it was.

Hal’s life story was published in 1990 and called ‘Hal Blaine and the Wrecking Crew’ – the title of which, I’m told, is where the collective name for the loosely-knit ensemble of top musicians he played with originated. There’s a tremendously interesting film ab 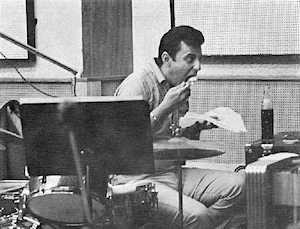 out this collection of elite players which included Leon Russell and Glen Campbell on Hal’s website which is well worth a look. The Wrecking Crew were an informal bunch of the very best Los Angeles musicians who, because of their empathy for one another, found themselves being booked en masse as a session ‘team‘. They weren’t simply ‘reading the dots’ and this aspect alone may well have guaranteed the artists who employed them a hit.

The ‘Crew’ were jointly and severally part of Phil Spector’s ‘Wall of Sound’ and he used all of them when he could. Strangely there were never two drummers employed to complete the wall – even though as you might expect from the fullness of the sound there were. Hal did play with Earl Palmer but that was on records like “Little Old Lady From Pasadena”. From what I’ve read, even though he made a great job of it playing with another drummer, it wasn’t his favourite thing to do. When he played with Earl they synchronised their parts perfectly but Hal seems to have preferred the freedom and flexibility of doing it all himself. For that reason he didn’t enjoy playing with a percussionist at the same time. In those halcyon days before over-dubbing became easily possible, he found percussionist’s parts often seemed to be conflicting with his own.

In his heyday Hal had one of those rectangular rubber stamps with a changeable date which normally say ‘Received’ made up, only his said: “Hal Blaine Strikes Again”. This legend began to find itself printed on the walls of drum booths all over Los Angeles and there was even one pointed out to Max Weinberg by Bruce Springsteen in a dressing room at Wembley 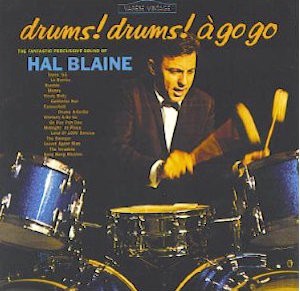 His contribution to music didn’t go unnoticed and at the turn of the century he was inducted into ‘The Rock and Roll Hall of Fame’ and seven years later he was honoured in the same way by ‘The Musicians’ Hall of Fame’ along with others from the ‘Wrecking Crew’.

Hal has been pictured playing with a traditional stick grip behind several regular drum kits: Pearl, Ludwig and Rogers. But the big multi-tom drum set he was famous for (and still played with that traditional grip) wasn’t made by any of the big manufacturers. It was built by Hal’s tech and a chap called Allen Blaemire in Los Angeles. This set was dubbed the ‘Monster’ and had single-headed, spun fiberglass-shelled toms (made by Blaemire) with a Ludwig bass drum and floor tom, and that was the kit that everybody wanted him to use in the studio. Hal had two of them, Ringo had another and the internet advises me Karen Carpenter was also the proud owner of one. To satisfy fastidious record producers who insisted on the best kit, Hal’s Blaemires were both called ‘Set 1’. They measured 6 and 8 x 7.5”, 10 and 12 x 8”, 13 x 9”, 14 and 16 x 10” and had no cases – they were simply rolled into the studios on their Klieg-light wheels. He evidently tuned them to the notes of “I Got Rhythm” and Hal always seems to have used them with a Ludwig 400 snare drum. The Ludwig bass drum originally had a calf skin head on the batter side, although this was later replaced by a ‘Duraline’. Hal always used Zildjian cymbals. 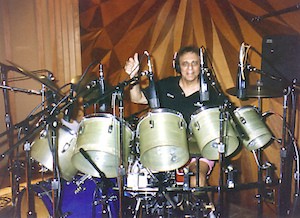 I’m sure we all have our favourite Hal Blaine parts and many people favour the ’boom, ba-doom, bap’ of the intro of “Be My Baby”. But for me the hi hat off-beat played with a stick, the tom fills and what ‘feels’ like a ‘stretched quarter note’ into a pushed downbeat on the very last four bars of the outro of The Carpenters’ “Close To You” gets my vote – it seems Hal often saved the good stuff until the outro on his sessions.

There’s a famous quote attributed to Bruce Gary from The Knack who says he “was disappointed to discover that all his favourite drummers were Hal Blaine”! They were mine too and I wasn’t ever disappointed.

I found a possibly more pertinent quote from James Gadson which said: “Hal Blaine defined the beat of ‘Top 40’ Radio”! Amen to that, I only wish I’d said it first!