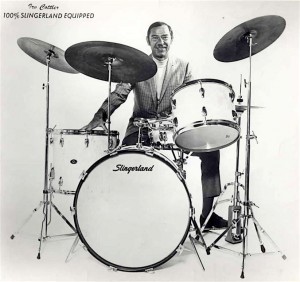 Irving Cottler was born in Brooklyn, New York on 13th February 1918. You may not know the name, but you certainly will have heard him playing because he was none other than Frank Sinatra’s drummer of choice, whenever, wherever and whatever he was playing. He joined ‘Old Blue Eyes’ in 1962 and stayed with him for 33 years. So apart from “Strangers In The Night” (which is Hal Blaine of course), that’s him you’ll hear on most of the great stuff including what I assume is secretly most drummer’s favourite: “New York, New York”.

He started out playing violin at 12 at his parents’ behest and hated it and there are reports that he taught himself drums – but they’re not true. He was taught for two years at New York’s ‘Radio City Music Hall’ by the great Billy Gladstone. The story goes that if he couldn’t afford to pay Billy, Irv would bring him a cheap cigar. The other side of the coin is that if the pupil, be it Irv or anybody else, hadn’t done their homework and practiced, Billy Gladstone would send them home.

His first gigs were when he was 14 years old in the Catskills having lied about his age so he could get into the ultra-strict American Federation of Musicians. For those of you who don’t know, the Catskills are a range of mountains a hundred miles outside of New York known as: “The Borscht Belt” or “The Jewish Alps”. This was where New York’s large Jewish population tended to go for their holidays. There were a great many hotels and camps there, like in ‘Dirty Dancing’, and consequently there were more gigs in the vicinity than you could shake a stick at (pun intended), and lots of drummers cut their teeth up there including Mel Brooks. It was in the Catskills where presumably Mel discovered that even though he was no slouch as a drummer he had a better chance for fame and fortune as a comedian-see my ‘Groovers and Shakers’ piece on “The Drummer as an Entertainer” for more info. 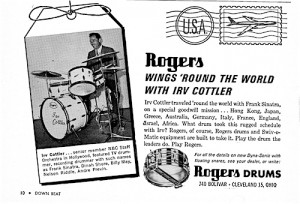 So, at the time he was doing this, Irv was either 14 or 16 (depending on which of the stories of his early life you believe) and playing with a famous vibes player called Red Norvo and a singer called Mildred Bailey. This would have been in the late 1930s and Irv says that while he played with him he learned a great deal about drumming. Red had a 14 piece band at the time and Irv successfully auditioned for him at a club called ‘The Famous Door’ on 52nd Street in New York. He beat 25 other drummers to the gig.

After Red Norvo he was on the road with band after band until eventually he got tired of riding the bus. He was married and had a child and having spent some time in LA with a jazz pianist, called Claude Thornhill, got a taste for it and decided he liked it enough to one day, up-sticks and leave New York for good.

In the fullness of time he moved on to play with Louis Armstrong, Bing Crosby, Ella Fitzgerald, Les Brown and Jimmy Dorsey. This last liaison eventually led him to Frank Sinatra. Buddy Rich had left Tommy Dorsey in 1942 to enlist in the US Marines and Irv Cottler took his place until he returned in 1944. After this he worked with bands on the understanding that he would not go on the road, nor would he do drum solos. Band-leaders respected this.

While I’m on the subject, Buddy Rich didn’t initially get on particularly well with Frank Sinatra, evidently thinking, inexplicably to my mind, that he was a better singer than Frank was! There are stories which say that because of this, when Frank began to sing, Buddy would often play very loudly to drown him out! Things changed eventually though, they shared a room on the road together and Sinatra actually provided the finance for Buddy’s first band – which unfortunately went bust after a couple of years. 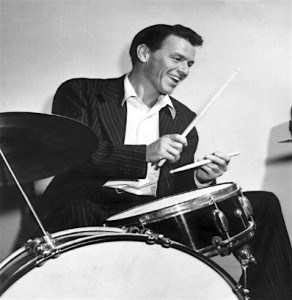 And of course his boss was a pretty good drummer too…

[Slightly off subject but still Blue Eye’s related, I don’t know if anybody reading this has tried to sing along with Sinatra but suffice it to say he had a unique sense of time which is/was frankly impossible to emulate. I don’t mean the intonation (which is difficult enough to imitate) I mean where he causes the lyrics to fall. He has a different drummer going on in his head and instead of producing a 4/4 pulse, it seems to revolve around minim (half note) triplets]

Irv had been on the road for many years when in the end he finally made the move to LA. This was in 1947 when he wanted to carve out a better life for himself and his family away from the harsh winters of America’s East Coast. He also wanted to stop travelling! He quickly got gigs with Nelson Riddle and Billy May both of whom adopted him which resulted in Irv playing on many of Sinatra’s classic albums on Capitol and Reprise. He also became a favourite of Andre Previn and Mel Tormé and went on to be a ‘first call’ drummer in LA during the fifties and sixties. Somehow he also found time to play in the house bands on various TV shows including ‘The Dinah Shore Show’, ‘The Milton Berle Show’ and ‘The Smothers Brothers’ Comedy Hour’ (the same show where Moonie didn’t make anybody laugh at all by infamously blowing up a drum kit without warning anybody in the studio – not even the rest of The Who!)

It was while he was working with the Dinah Shore Show for 12 years that he really needed to have his stuff together because at any given moment he’d be backing the likes of Peggy Lee, Billy Eckstine, Ella Fitzgerald and any other great vocalist who just happened to be live on the programme that day! And he certainly wasn’t playing jazz all the time – he had to be equipped to play whatever music they put in front of him. To do this besides drums he needed to play tympani, xylophone and vibes. Irv was also a member of the Wrecking Crew’, an elite group of first call session musicians which included Hal Blaine. 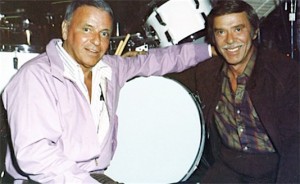 Irv’s connection with ‘Francis Albert’ came about when Nelson Riddle received a call from Capitol Records, the company Sinatra was signed with, to do an album called “Songs for young Lovers” and he wisely booked Irv Cottler to play the drums – the rest is history. He also worked on numerous film scores around this time including “Mary Poppins” and “Jungle Book”.

[BTW there is a clip of a guy called Don Hennig on Youtube playing along to the backing track of “New York, New York” exactly as Irv Cottler played on the record, but in close-up. It’s a revelation and a real education in ‘less is more‘. And I discovered it doesn’t quite go how I thought it did.]

As it happens I actually did meet Irv Cottler in my Drumstore-owning days when he came over to do a drum clinic for us. He was a very nice guy and very confident in a no-nonsense, native-New Yorker way. He didn’t tell us any jokes although I’m sure he could have if we’d asked. He wasn’t joking when he was recording with Bobby Darin though. While they were running through the song he stopped everybody and walked over to show Irv how he wanted the drum break in bars seven and eight of the intro to be played! Irv stood up, stared him down and responded with: 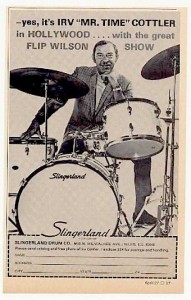 It’s a good story and an incident he seems to have completely forgotten when he said he’d got on with every singer he’d worked with:

“I learned one very important thing working with big bands and singers. Never get in anybody’s way, especially with a singer. The singer is the star and you play for him!”

Irv always felt that they most difficult thing to do was to play simply. He said that Davey Tough was an exceptionally good drummer who wasn’t a technician but who had a great feeling for drums. He never got in anybody’s way and that was his secret Everything he did was right.

Unsurprisingly, like everybody else, Irv was in awe of Frank Sinatra and even when he was in high demand in the studios in LA, if Frank called him he’d drop everything and go! He said that Frank’s musicianship rubbed off on him, because he felt he was at his best when he worked with him. “A certain kind of drums were required, not any fancy drumming just big band swing. You couldn’t make a detour off the road . You just laid down some good time, swung the band and swung him.” 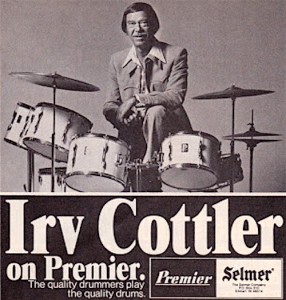 Irv had a philosophy about big band drumming calling it “a very precise art” He went on to say how “he felt sorry for young drummers because they couldn’t get that kind of playing today.”

In his time Irv produced a book called “I’ve Got You Under My Skins” which has drum charts and transcriptions of all the great Sinatra songs without Frank and a record called “Around The World In Percussion”.

As far as I can see, Irv used a one-up, one down 4-piece with three cymbals and a pair of hi hats all his life. He endorsed Slingerland, Rogers, Leedy, Remo (possibly) and Premier (where he diverted from the norm with a 7-drum set). He also was partial to Zildjian cymbals.

Irv Cottler died from a heart attack in California on August 8th, 1989. Frank Sinatra described him as “the best in the business!”