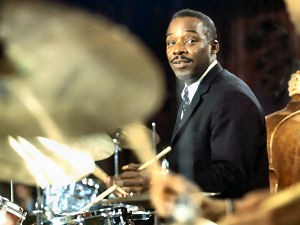 Kenneth Spearman Clarke was born in Pittsburgh, Pennsylvania on January 2nd, 1914 to Charles Spearman and Martha Grace Scott. His mother was a pianist who taught him the piano until her sad death when he was just six years old. Things got worse after this disaster when his father left the family and Kenny was moved, with his brother Chuck, to a home for abandoned children.

I’ve always been fascinated by Kenny because eventually he left his homeland, where he was a very successful jazz drummer, to settle in Paris and start a new and ultimately more prosperous career in Europe. I was aware of his presence when I was living there in the mid-sixties but never met him. Of course he wasn’t the first American, or even the last, to do this but in the fifties when he did it, it must have been a brave, albeit an exciting thing to do.

He came from a very musical family and besides drums could also play vibes and trombone. He also studied music theory and composition and as I already mentioned his mother taught him to play the piano at a very young age. By the time he was 17 he was playing drums around town for a living and on the road in the mid-west with the Jeter-Pillars band for several years with Jimmy Blanton and Charlie Christian before he made his inevitable move to New York at 21 years old.

Kenny was an innovator who was responsible for moving the constant quarter note pulse of timekeeping up onto the ride cymbal leaving his left hand to play more syncopated figures, grace-notes and accents on the snare drum. His bass drum, now freed from having to play the mundane pulse of time could now be used to ‘drop bombs’ something which Jo Jones is credited with originating. Eventually those cymbal quarter-notes began to break apart and become slightly less rigid, and the ‘ding, ding, da ding’ or ‘ten to two’ rhythm which is indigenous to jazz was born. This was, of course, the very beginning of bop – a record producer called Ross Russell put this into perspective when talking about the ride cymbal: “the vibration of the cymbal once set in motion, is maintained throughout the number, producing a shimmering texture of sound that supports, agitates and inspires the line men. This is the tonal fabric of bebop jazz”. 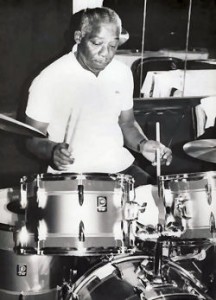 He put all the elements together for this far-reaching style once he was working in New York to where he moved in 1935 playing with the likes of pianist Edgar Hayes and trumpeter Roy Eldridge. Kenny said that he had all these new drumming things in place by the time he was the House Drummer at Savoy Records as well as leader of the house band during the beginning of the ‘forties’ at Minton’s Playhouse on West 118th Street in Harlem with the likes of Dizzy Gillespie, Thelonious Monk, Charlie Christian, Coleman Hawkins and Charlie Parker sitting in. These were ostensibly jam sessions but Charles Mingus said you certainly couldn’t just walk on stage and grab a bass and get started. You had to go into the backroom and they would call some tunes like ‘Body And Soul’ and ‘Perdido’ to see if you knew them. There was a time when the place was packed with musicians wanting to get up and do their thing but Miles Davis said the guys in the know wouldn’t bother to join in the battles. They were content to sit in the audience and listen and learn.

Evidently Kenny Clarke desperately wanted Charlie Parker to play in the Minton’s house-band but the story goes that ‘Bird’ wasn’t interested until both he and Thelonious Monk paid him out of their own salaries!

So this was the beginning of the ‘Bebop’ movement which eventually metamorphosed into Modern Jazz and drummers, including Art Blakey, Max Roach, Don Lamond, Tiny Kahn and Davey Tough, would flock to Miltons to check Kenny Clarke out.

Kenny Clarke’s nickname was ‘Klook’ and he acquired this from a drum figure he played which consisted of a rimshot on the snare followed by a bass drum which onomatopoeically produced the sound ‘Klook-mop’. You can hear this on a Dizzy Gillespie tune called “Oop Bop Sh’bam” where the lyric goes ‘Oop bop sh’bam, a klook a mop’. 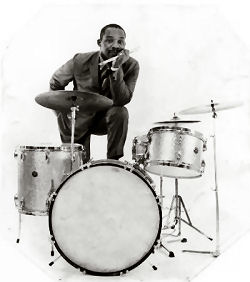 In 1941 he played with both Louis Armstrong and Ella Fitzgerald (when he took over the drum chair in Chick Webb’s band on his death and Ella was in charge of it). Around this time ‘Satchmo’ was informed by his then drummer, Sid Catlett, that he was leaving and he should hire Kenny. ‘Big Sid’ coached him so that he got the gig. Louis called him ‘Little Gizzard’ and spoke of him glowingly famously saying: “That man is modern”.

Eventually the band at Miltons moved-on and from 1943 to 1946 Kenny was conscripted into the US Army where he was eventually a Regimental trombonist. Unfortunately this meant he missed out on making the first bebop recordings which he should certainly have been part of, including playing on “Salt Peanuts” – his very own tune which he co-wrote with Dizzy Gillespie. His time in the service wasn’t exactly wasted because while he was there he fortuitously met John Lewis which led him firstly to the Milt Jackson Quartet while recording with Charlie Parker. This group (with Ray Brown on bass) became The Modern Jazz Quartet. This was the beginning of Chamber Jazz and he stayed with The MJQ until 1955. Soon after this he moved to Paris where he stayed for thirty years.

Kenny first found his way to Paris in 1948 playing with a Dizzy Gillespie big band after he was discharged from the Army and the laissez-faire life-style there appealed to him as an Afro-American – as of course it did to a great many other musicians, dancers, authors and painters. It was an added advantage to his domicile there that he could make more money playing in France than in his home country! The die was cast and he moved to Paris ‘lock, stock and barrel’. He was now known as Liaquat Ali Salaam having secretly converted to Islam having become disillusioned after his time in the forces.

Soon after he arrived in France he put together a trio of ex-pats called ‘The Three Bosses’ with Bud Powell and Pierre Michelot who gigged around France and found the time to record the music for a acclaimed film noir called ‘Ascenseur Pour L’echafaud’ with Miles Davis.

His next step was a big one in more ways than one – in 1961 he put together a big band with the cream of European and ex-pat American musicians around a Belgian pianist.. The resulting Kenny Clarke-Francy Boland Big Band lasted for 11 years and included several British musicians including Ronnie Scott and Kenny Clare. 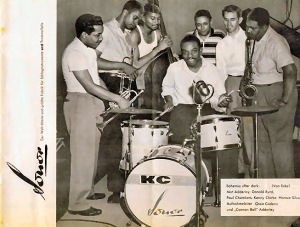 As far as the romantic side of his life was concerned Kenny was married twice the first time to singer Carmen McRae and the second to Daisy Wallbach. In 1949 he had a son, also called Kenny Clarke, with Annie Ross who was a highly-respected jazz singer and actress originally from Scotland. They were never married and the liaison didn’t last, so young Kenny was brought up by his father.

As far as equipment is concerned there are pictures of him with Gretsch drums, Sonor drums and Asba. I have a suspicion he may have played a Trixon ‘Speedfire’ set too although since he didn’t like drum solos I don’t quite see the point – possibly he did it simply for the publicity shot. I haven’t turned up anything on the subject of cymbals, but it’s a safe bet he played Zildjian.

Eventually he rightly took to teaching in Paris having influenced several generations of drummers including the greats: Art Blakey and Max Roach. Ed Thigpen is on record saying: “every drummer owes Kenny Clarke a debt of gratitude”. Without him it seems we’d all still be ‘digging for coal’ and riding on the snare drum.

I picked up a quote that described him as ‘an old fashioned modernist who made musicians comfortable by staying out of their way. He disliked drum solos so what solo work of his there is was on the snare drum and he frequently did recording sessions without any toms because he didn’t need them! A salutary lesson for the 21st Century players perhaps?

Kenny Clarke died in France on January 26th, 1985 and is buried in the Montreuil suburb of Paris. There is even a street named after him there – Rue Kenny Clarke!