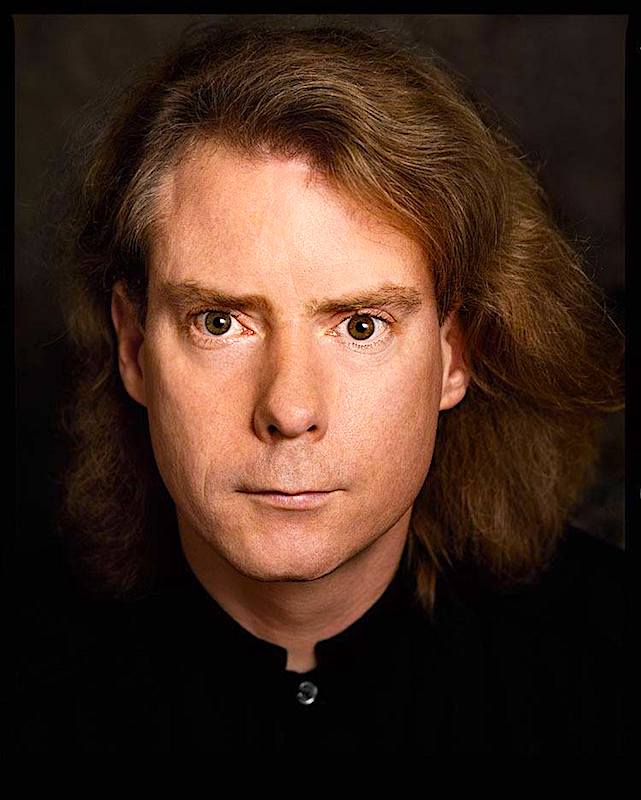 Michael Shrieve was born in San Francisco on the sixth of July, 1949. He’s an American drummer, percussionist, and composer with Irish, German and French ancestry. Like Gene Krupa he wanted to be a priest but he took a somewhat different path.

Of course my generation know him rather well as the drummer of the rock band Santanawhich came to the world’s notice in the Woodstock film and the gig of the same name. He played on the band’s albums from 1969 to 1974. It seems he was the youngest player there in 1969 when he was just 20 years old. His drum solo during ”Soul Sacrifice” in the Woodstock film from Max Yasgur’s farm in upstate New York has rightly been described as “electrifying”

He grew up as a youngster on The West Coast before moving to New York in the footsteps of the jazz greats of 52nd Street: Charlie Parker, Max Roach, Miles Davis et al. Like many others, his hero at this time was Elvin Jones.

Michel Shrieve’s first full-time band was called ‘Glass Menagerie’, followed by some useful experience in the house band of a New York R&B club, backing touring musicians like BB King, and Etta James. At the somewhat precocious age of 16, he found himself playing a jam at ‘Fillmore West’ in San Francisco aka The Fillmore Auditorium where absolutely everybody touring on the West Coast aspired to play, including Argent. 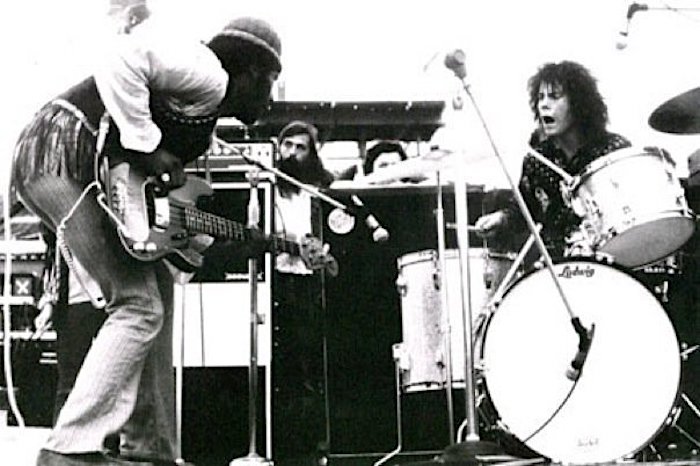 Whilst playing at the Fillmore, he attracted the attention of Santana’s manager, a chap called Stan Marcum. In 1968, at age 19, Shrieve jammed with Santana at a recording studio and was invited to join that very same day.

It’s just about the best documented incident in rock music that on August 16, 1969, Santana played at the Woodstock Festival, a month after Shrieve’s twentieth birthday. It was just before the release of their eponymous first album which included his drum solo ‘Soul Sacrifice’. This was in 1969 and he remained with Santana for the next six albums: Abraxas (1970), Santana III (1971), Caravanserai (1972), Welcome (1973), Borboletta in (1974) and their live album Lotus in 1974. He co-wrote four of the tracks on Caravanserai as well as co-producing that album.

During this time, because we were with CBS, Argent and Santana were ploughing more or less the same furrow and we coincided at gigs, TV programs and festivals in America with the likes of Lenny White, Alphonse Mouzon, Narada Michael Waldren and countless others. We invariably talked about drums, drummers and drumming. 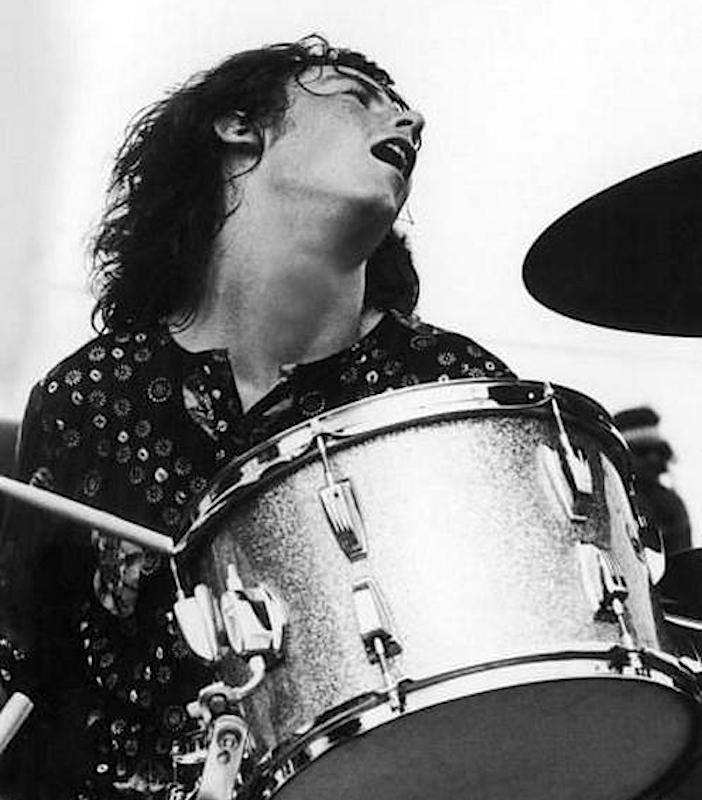 But while Argent were spending more time in the US, Michael Shrieve left the original Santana band to pursue solo projects and moved to London. In England he recorded the 1976 album Automatic Man with guitarist Pat Thrall, bass guitarist Doni Harvey and Todd Cochran on keyboards. While domiciled in London, Michael became part of the highly progressive fusion supergroup ‘Go’ with Stomu Yamashata, Stevie Winwood, Al Di Meiola and Klaus Schulze. They released two studio albums Go(1976) and Go Too(1977) and their live album ‘Go Live from Paris’ released in 1976.

Next he played in the band Hagar, Schon, Aaronson, Shrieve (with Sammy Hagar, Neal Schon, and Kenny Aaronson). Not long after, he played drums on Roger Hodgson from Supertramp’s first solo album, ‘In the Eye of the Storm’.

Shrieve was also credited with playing percussion on the 1980 album Emotional Rescue by The Rolling Stones and in 1984, he played on Mick Jagger’sShe’s the Bossalbum. When Jagger, Nile Rodgers and Shrieve were mixing the album at The Power Station in New York City, Jaco Pastorius invited Shrieve for a recording session downstairs. Unfortunately what sounds like a very interesting album has yet to be released. 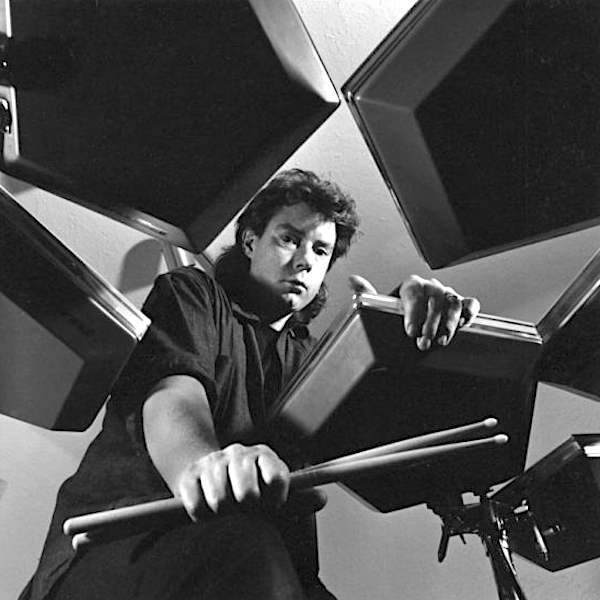 In April 2010, Shrieve moved to Seattle, Washington, where he played in a fusion jazz group, Spellbinder, at The White Rabbit every Monday night in Fremont.

Shrieve has composed music for several films, most notably Paul Mazursky’s Tempest and Apollo13. As well as composing, he’s also been an actor and had a cameo role in Gimme Shelter.

As far as gear is concerned, at the start of his first tour in America he’s said to have had a drum kit consisting of just two Japanese snare drums. However, by the time the tour got to North Dakota he had enough money for a kit, but we don’t know whether it was the Ludwig Super Classic kit which he later used at Woodstock. Incidentally, that Ludwig kit later sold at auction for $187,500, so someone (again we don’t know if it was Michael) made a rather decent profit. Michael has also been pictured with DW, Tama and Yamaha kits, as well as the rather curious Premier Resonator with a somewhat distinctive paint job. 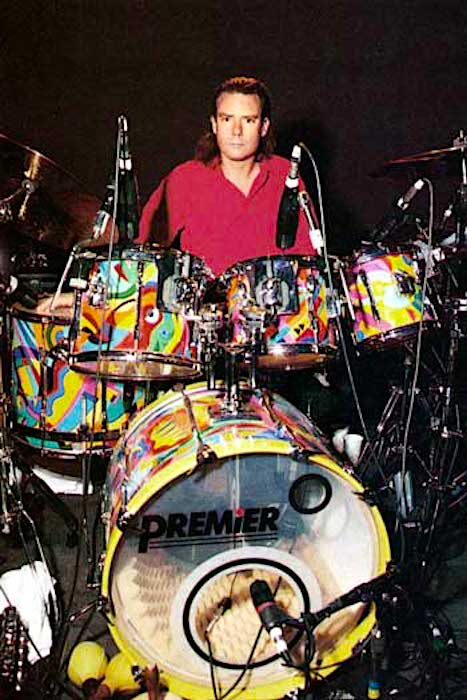 As far as cymbals are concerned he started with Zildjian (the interesting ones at Woodstock were an 18” crash, 20” ride, both with rivets, and a pair of Avedis 14” hi hats. There are pictures on line of him with Sabian so I’m guessing he uses what he wants.

Michael seems to have played with all the luminaries of the 20th and 21st centuries including the Stones, Jagger, John Mclaughlin, Andy Summers and many, many others. In 1998 he was inducted into the Rock & Roll Hall of Fame for his work with Santana. However IMHO If you want the essence of his playing check out his track ‘Sam The Man’. It’s beautifully under-played.

In March 2011, when Rolling Stone Magazine Readers picked The Best Drummers of All Time Michael Shrieve came in at number 10.

From 1990 to 2005 he was host, performer and curator of ‘Bumberdrum’ which gathers a stage full of percussionists to perform together in Seattle. He’s also past-president of the Pacific NorthWest branch of NARAS, (The National Association of Recording Arts and Sciences.) 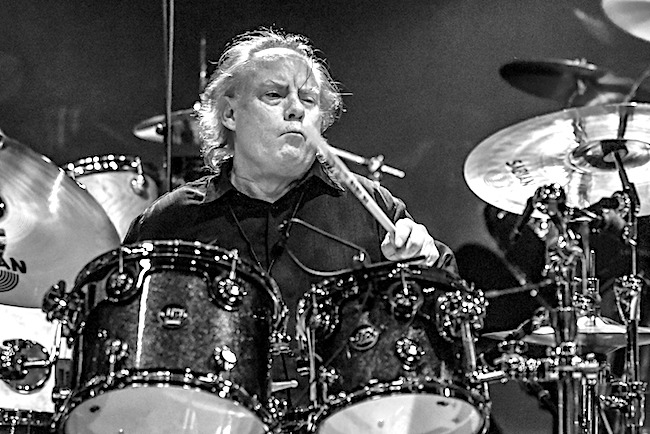 Even though it’s coming up to a half-century since Woodstock Michael Shrieve shows no signs of slowing down. He’s still playing , writing and producing music for all sorts of film projects and working with the cream of the world’s artists.