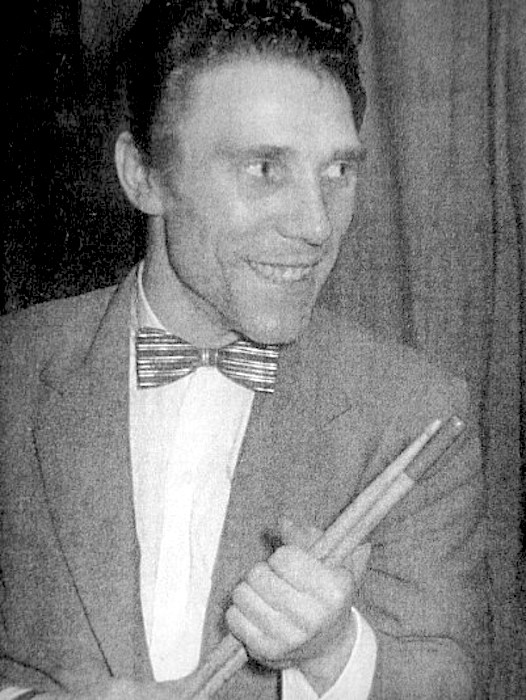 Raye Du-Val was born on August 7th, 1932 of Anglo-French parents and brought up in what was once known as The Latin Quarter of London’s Soho. He began his drumming career in 1954 as a Talent Show “Discovery” on the Carol Levis Show which was a popular radio programme which ran from 1950 to 1961. He turned professional at the age of 15 after turning down an opportunity to become a professional footballer with Arsenal.

Raye studied drums with Max Abrams, Eddie Taylor (who played with Johnny Dankworth), and Verdie Shaw who I can’t find much about other than the fact that he played percussion with the Bournemouth Symphony Orchestra. Raye was evidently given a few valuable pointers from Gene Krupa and other greats. He says he was fortunate to hang out with most of the stars of the UK drum scene including Ginger Baker, Phil Seaman and Dickie Devere. Famously, he was the first in the world to exceed a century of hours in marathon drumming, grabbing the title from Rory Blackwell and this non-stop playing activity which was popular in the fifties and was something he did rather a lot of.

[FYI the playing record seems to be 134 hours and 5 minutes by a Canadian in August 2015. There is evidently some concern in that there’s a squabble going on as to whether electronic drums should count since they’re deemed to be easier to play than acoustics. Discuss] 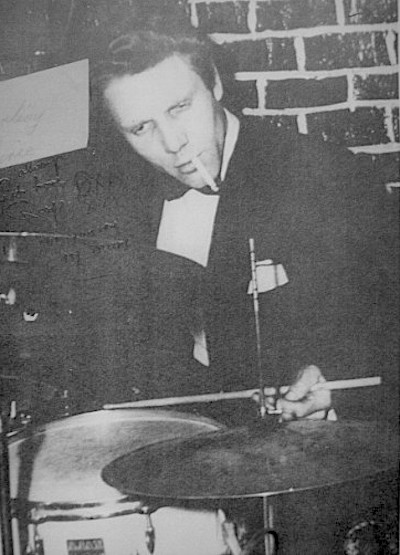 However Raye is not in G&S because of his obvious stamina, but for the fact that he, like several important American drummers on the other side of The Atlantic, viz Hal Blaine, and Earl Palmer, bridged the perceived gap between jazz and rock ‘n’ roll. He wasn’t the only Brit to see which side his bread should be buttered since he actually began as a Dixieland drummer. In the early days he, and almost everybody else, had to turn their hands to as many styles as possible in order to survive. The list of styles he talks of mentions Irish Music, Latin, Old Time, Trad Jazz, Fols de Rols and Big Band. The ones he mentions were more dance bands such as Joe Loss, Syd Dean, Sid Phillips, Ken Mackintosh, Harry Leader et al.

When I turned pro in 1962 the ‘Fol de Rols’ (a name I can’t find a meaning for although it’s mentioned in Charles Dickens’ ‘Oliver’) aka ‘’The Fols’ were still going strong. It was a musical-hall act billed as the ‘Music and Laugh’ show which worked mainly in Summer Seasons around the seaside resorts of Britain and in the winter at the biggest cities in Britain.

Leslie Crowther, whose daughter Caroline married Thin Lizzie’s bass player Phil Lynott was one of the show’s perennial stars. The music that Raye du Val played with them would have been very much the music of yesteryear and didn’t have anything whatsoever to do with rock ‘n’ roll unless they slipped some in towards the end of the show’s life in a vain attempt to curry favour with younger punters.

As a bit of background, the Fols show started out as a Pierott (the white faced clown with a big tear on his face) show in 1911, and with one costume change managed to sustain itself until through to the sixties. By this time the public was more interested in seeing TV stars, so it seems to have limped into the seventies whereupon they called it a day. 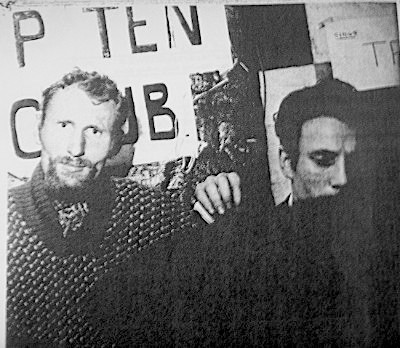 Raye with Ginger Baker, at one of Raye’s record attempts

But back to our subject, venues were different in those days when Raye worked in cabaret in London’s West End, and more intimate. The Stork, Churchill’s and various other ‘posh;’ watering holes were places where, if you were lucky, you might bump into a member of the aristocracy or even one of the Royal family.

To be honest I’m pretty sure I saw Raye where I saw a great many drummers as a new teenager, The Imperial Hall, which was a dancehall in the leafy suburb of Waltham Cross, where I grew up. I certainly can’ remember who he was playing with.

It also says on various websites that Raye performed in the London jazz clubs with Tubby Hayes, Don Rendell, Ronnie Scott and with The Dutch Swing College Band. We know he also worked in the Paris clubs such as “The Blue Note” and “Vieux de Colombier” on the Seine which was in St. Germain-des-Pres which was and would be, home to la Comedie Francaise as well as Duke Ellington, Charlie Parker, and Miles Davis. Unusually, he also worked with a circus band and, in France, ran his own Big Band with Sacha Distel on guitar.

In his time, he played with various Americans like Jerry Lee Lewis and Gene Vincent as well as embryonic British rockers like Ricky Valance, Jimmy Justice, Johnny Duncan and his Bluegrass Boys, and Emil Ford. It was with Emil Ford’s Checkmates that he made his mark with a a million selling record “What Do You Want To Make Those Eyes At Me For” for which he received a gold record. He appeared on the various TV programmes we had on (black and white) TV in those days including ‘Oh Boy!’, ‘All That Jazz’ and ‘Six-Five Special’. 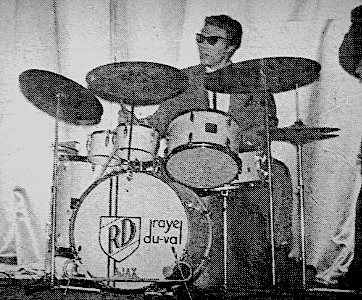 On his website he said: “my first ever sit-in was for Big Sid Catlett with Sidney Bechet and he gave me a pair of his sticks as a memento. I was the first drummer to play with a zither player, an Austrian lady, ‘The Widow Hausl’. I have performed drum rolls on recordings for BBC programmes and have recorded with chart names at Abbey Road studios, TV and screen adverts, sessions, film scores and the odd theatre gig.” He was actually in the long shots of a film called ‘All Night Long’ which was based on Shakespeare’s Othello, and starred Patrick McGoohan who played a jazz drummer, who made a good fist of it on a white Trixon Luxus kit. I was once told by Terry O’Neill that Patrick had locked himself into a garage and didn’t come out until until he could play convincingly enough to mime the drum parts.

“I became a great friend of Gene Krupa and family, who put me in the Hall of Fame, although I am not worthy of such an accolade.” 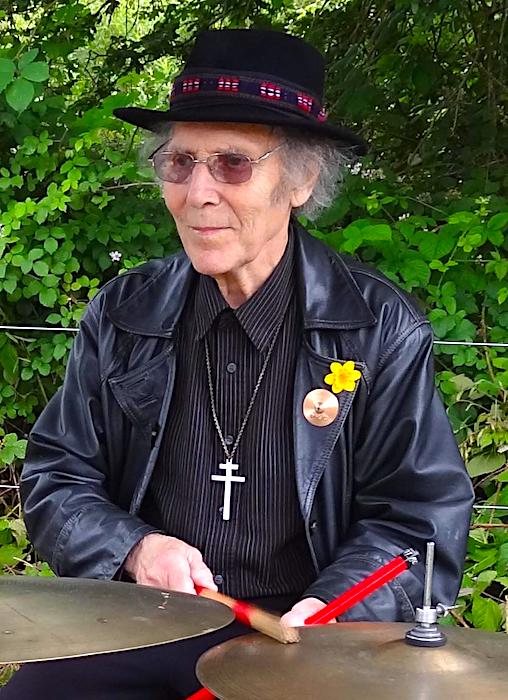 Raye also became head of the London Chapter of the Gene Krupa National Jazz Association and says he liked to regard himself as a historian of Gene’s life and career. Gene gave Raye a cymbal used on Benny Goodman’s Carnegie Hall Concert in 1938.

As I intimated, in the late 1950’s he saw the change in the music scene and moved into ‘the dark side’ and Rock & Roll. However there was more: between 1959 and 1969 he was triple winner of the World’s Non Stop Drumming Marathon Contest as I mentioned earlier. This was verified by the Guinness Book of Records and The National Jazz Federation.

It seems he turned down the opportunity to make a film of his life for personal reasons, but that the writing of his life story was a work in progress. Before he died he was still very busy keeping his technique together and doing some teaching. He was also said to be a keen collector of drumming memorabilia.

Pictures courtesy of Trevor Downer, who runs the site at