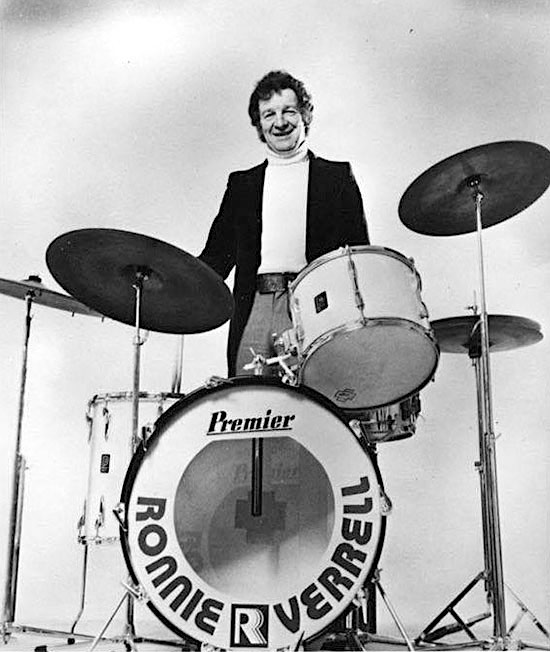 Ronald Thomas Verrell was born in Rochester on 21st February 1926 and the internet simplistically describes him as an ‘English jazz drummer’ but that title doesn’t really do him any justice at all – he could actually play anything. Slightly better is The Telegraph’s “Britain’s best-known Big-Band drummer for half a century”. But even so…

In his time Ronnie played for (amongst countless others) Nat King Cole, Frank Sinatra, Tom Jones, Peggy Lee, Dusty Springfield, Shirley Bassey, Englebert Humperdinck and just about anybody who topped the bill at the prestigious ‘Sunday Night at the London Palladium’ in the sixties. He was probably most famous for something which probably wasn’t quite what he really wished for, but we’ll get to that later.

In his time he played in the UK’s two most prestigious Big Bands – The Ted Heath Orchestra and The Syd Lawrence Orchestra. And because of his advanced ability to sight-read absolutely anything, he was also in great demand for television. He drummed for Jack Parnell’s Orchestras on ATV and also on that Sunday Palladium TV show which was a hugely popular programme watched by anyone in the UK who had a television.

I was professional at this time, playing with Adam Faith, and our paths frequently crossed in canteens at TV shows, and as drummers do, we would talk about drums and drumming over a cup of tea. It came as a surprise to me to discover he was actually very interested in the nuts and bolts of rock ‘n’ roll drumming and I was astonished to be invited over to his place in Epsom(I think) as a just seventeen year old kid to show him how it was done. I realise this may sound preposterous, but honestly, the conversation really happened, even though (unfortunately) we didn’t get around to organising the actual event. 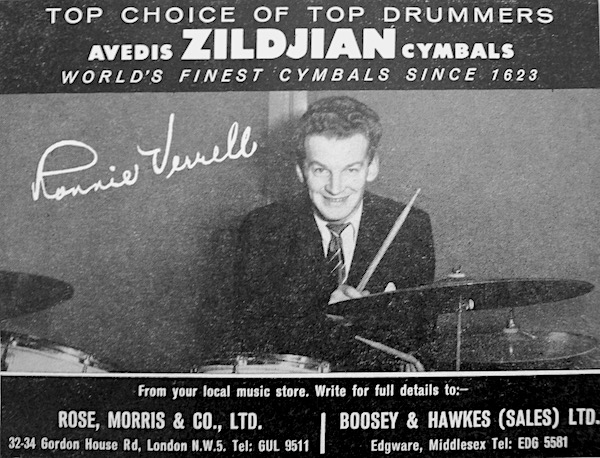 Allow me to explain. In 1962, rock ‘n’ roll had only just got rid of its ‘dirty word’ stigma. The penny had dropped to modern jazz and Big Band drummers alike, that, like it or not, as Chuck Berry once sang “Rock ‘n’ Roll was here to stay”. There were many great jazz players who were having to come to terms with that situation. They simply had to learn how to do it, or they’d be struggling for work. Ronnie discovered he was one of these and decided to do something about it.

In his early life he evidently didn’t show a great deal of interest in music until he saw The Benny Goodman Quartet perform in a film called “Hollywood Hotel” in 1938. Ronnie was so impressed by what he saw, that he broke the rules and stayed on in the cinema to watch the film a second time. The die was cast – he was going to be a drummer – and he taught himself how to play after only one lesson from the formidable disciplinariandrum teacher Max Abrams. The rest he taught himself.

In 1940, as the war really got into its stride the 14-year-old Verrell was evacuated to Porthcawl in South Wales, where he made his first public appearances playing with local bands in the area. Three years later he returned to Kent and worked professionally for a while with the Claude Giddins band, before eventually being called-up to work as one of the ‘Bevin Boys’ in the South Wales coal mines, where he stayed for the rest of the war. 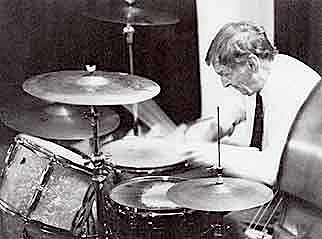 When the war ended Ronnie began performing with Scottish saxophonist Tommy Whittle and Belgian trumpeter Johnny Claes, and between 1947 and 1951 he played with several other big bands led by Carl Barriteau and Cyril Stapleton. In September 1951 he joined the leading British big band: The Ted Heath Orchestra where he stayed until Heath’s retirement in 1964. They performed at many concerts, including Sunday-night swing sessions at the London Palladium, and uniquely toured America in 1956, where they were the first British big band to make it on the US scene.

Ronnie played on many of Ted Heath’s hits, including “The Champ”, “Hot Toddy” and “Swingin’ Shepherd Blues”. His tour de force with the orchestra was his well-known drum solo – “Hawaiian War Chant”. Of his time with Ted Heath he had this to say: “Ted Heath never had guests and we were always sold-out. That’s how good it was. I remember thinking I never wanted it to end.”

After leaving Heath’s band, Verrell focused on session work and backed a great many of the world’s most popular artists of the time. This was when he joined Jack Parnell’s house band at ATV where he stayed for ten years, until in 1980 he joined Syd Lawrence’s band and stayed with them for almost 20 years. By 1980, he’d been almost exclusively a studio musician for more than a decade when out of the blue he received a call from Syd Lawrence who had Britain’s leading Glenn Miller-style band. Apparently the conversation started: “Can you help me? I know you’re busy. How are you fixed next Sunday?” 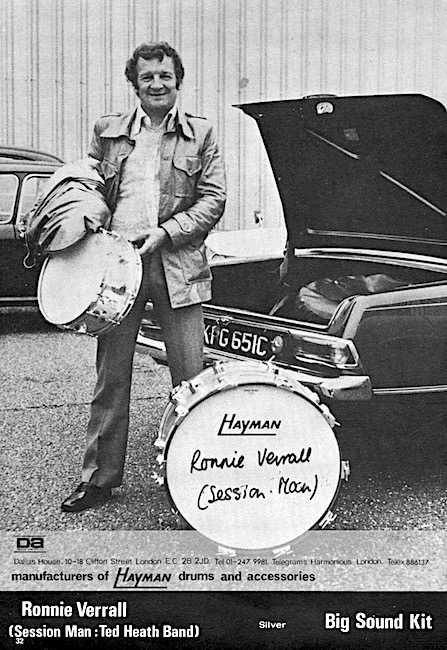 Ronnie with his 18″ Hayman Recording Set

“So I helped him out that Sunday,” Verrell recalled in a 1996 interview – and, for almost two decades, he continued to work for Lawrence. “It was great to be playing again to a live audience, and playing what you want to play to a full house and be appreciated.”

Because of his sight-reading ability Ronnie Verrell had been in great demand for several television shows during his career with perhaps his most well-known one being Jim Henson’s Muppet Show. Here he played drums for Animal, the show’s frenzied puppet drummer. When Buddy Rich (who was one of Ronnie’s heroes, guested on the show, Verrell (as Animal) had a drumming duel with him and won(!) after Animal smashed a drum over Rich’s head. Ronnie was one of Buddy’s favourite drummers too so in my humble opinion, the drum ‘battle’ somehow highlighted their mutual respect for one another.

In the mid-1990s, Ronnie Verrell formed his own band, a five-piece which he modelled on Benny Goodman’s band. Several years later he was involved in a serious road accident which forced him to stop performing for almost a year. But after recovering he continued to play with Syd Lawrence’s band.

In 2000 he got on the road with an all-star band, ‘Best of British’, where as in his Ted Heath days his drum solos earned him standing ovations. His final appearance was in the ‘Skinnerettes’ on another popular TV show with writer and comedian Frank Skinner. His last performance on the show was in 2001. 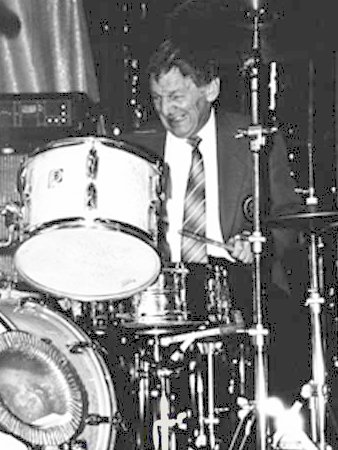 Like a great many drummers of his generation Ronnie was an Ajax player, although he moved on to play Premier, Hayman and eventually Yamaha.

Ronnie Verrell died on 22 February 2002 in Kingston on Thames in England, the day after his 76th birthday. The cause of death was a chest infection he contracted during an operation to fix a crushed vertebra resulting from a fall down some stairs in November 2001.

His obituary in The Telegraph describing him (as I said earlier) as:

“He possessed a rare combination of craftsmanship and bravura showmanship. His feature numbers, such as ‘Hawaiian War Chant’, invariably brought audiences to their feet.”

Another obituary said: “Whenever a drum was beaten or a cymbal crashed on a British-made film or television soundtrack, it was likely to be Verrell’s work.”

All that, AND he was also one of Buddy Rich’s favourite drummers. Not bad for someone who spent his war years down the mines!

Big thanks to Louis Barfe for his assistance with the photos at short notice – thank you!