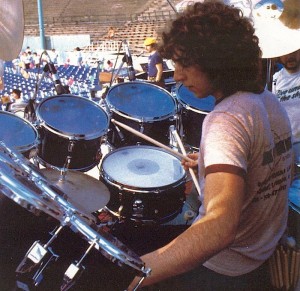 Simon Phillips was born in London on February 7th, 1957 which makes him considerably younger than me. However, I’ve known him since he burst onto the music scene at a very precocious age.

He went to a school called Winchester House outside of London where they weren’t able to accommodate his desire to be a musician. So he transferred to Bushey Mead where they were more sympathetic and had a band for him to play in. 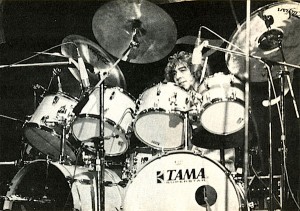 12 years old. His father was Sid Phillips who was a jazz clarinetist of some note, and who had quite a reputation in the dance halls and on the radio, as far as my parents’ generation was concerned. Simon stayed with the band for four years, but after his father died, he decided to move onto rock and roll in all its various different genres.

As I recall, his earliest ‘proper’ gig was in the pit for ‘Jesus Christ Superstar’ in 1973 where he stayed for a year. This was when he was only 16(!). Immediately after this he began to play with jazz/blues singer Dana Gillespie who had also spent some time in Jesus Christ Superstar. It was with her he made his first trip to America. 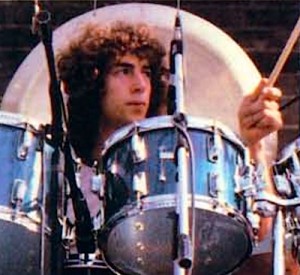 Sometime before this that our paths crossed around the music shops and cafes of London’s West End, and I remember him coming into my drum shop when it had just opened in 1977.

I saw a great quote about Simon which, for my money definitely says it all. I’m afraid I can’t actually attribute it to anyone, even though I found it all over the internet including on New York’s Iridium jazz club website:

“Simon Phillips is by far one of the world’s most renowned and respected drummers, whose style not only reflects his technical gift but also his distinct musical sensibility. Whether it is rock, fusion or jazz, Simon applies the same precision and intensity to his drumming, which is never lacking in emotion and feel.” 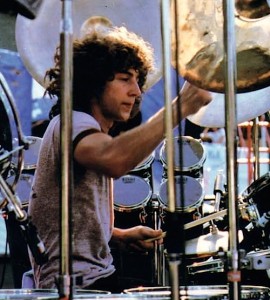 We could almost stop there, but we won’t!

As far as London was concerned he pretty much had the session world at his feet by the time he was in his early twenties. He admits in Modern Drummer that in 1975 and 1976 he was playing three sessions a day, every day. If Billy Cobham was the first drummer I saw playing ‘open handed’ when we toured with Mahavishnu Orchestra in 1971, Simon Phillips was the second. In a Modern Drummer interview he revealed he didn’t start to play that way until 1975, during his session peak. 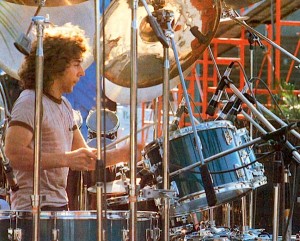 He’s also had a crack at recording various pieces of music for the odd film including “The Odessa File” and “Evita”.

When Keith Moon died in 1978, Kenney Jones was the first to substitute for him. However he only stayed from 1979 to 1982 and eventually Simon got the call in 1989. As Simon has said in interviews there was no right or wrong way for anyone to play with The Who – it was all about the songs. However, I always felt his prestigious technique allowed him to emulate Moonies’ ‘manic’ style of playing.

It was in 1992 that he decided to make the move to America, something which almost perfectly coincided with being asked to join Toto. This of course was immediately after Jeff Porcaro’s untimely death when the band refused to go ahead with an already arranged world tour, unless Simon joined them! He was duly booked for Toto’s world tour and remained a full time member for 21 years. 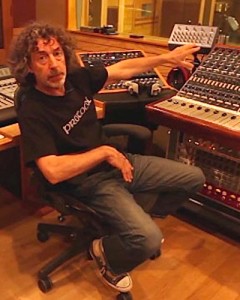 After recording and co-producing the album “Tambu” for Toto in 1995 he started on a solid year of touring in Japan, SE Asia and South America.

However in 1997 Simon decided to take a break from Toto in order to do something he felt he had to: he went on the road with his own band as the bandleader for the first time, playing his very own music. This time the schedule included Europe, Japan and The United States, along with a performance at The North Sea Jazz Festival.

1998 saw the recording of another Toto studio album entitled ‘Mindfields’ which was followed by 2 years of touring around the world. The live gigs were captured on the CD “Livefields”. 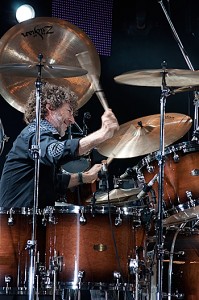 Expanding his career from drumming to writing solo projects, Simon recorded his first album “Protocol” in 1988, followed by “Force Majeure” in 1992. “Symbiosis”, which he recorded in 1995, was, according to the internet, “as spirited but more inspired than ever, and showed a change of direction in the compositions”. Simon likes to link this growth in songwriting and new artistic depth to his move to the States. The 1997 record “Another Lifetime” demonstrates yet another side of his tremendously resourceful playing and an even more motivated composing. “Out of the Blue”, a live album, followed in 1998 and in 1999 another complete change of style took place in his latest record “Vantage Point”, which is a pure, straight ahead jazz album.

Something else to add to Simon’s comprehensive CV is producing and engineering. This is something he got into when he lived in England and was working with British composer Mike Oldfield of ‘Tubular Bells’ fame. He worked on three albums with him. Aside from his solo projects, Simon also co-produced Toto’s “Tambu” in 1995,followed by “Mindfields” in 1998. Simon was asked to engineer the next Toto album, and spent a couple of months during the winter of 2001/02 in his own studio recording “Through the Looking Glass” 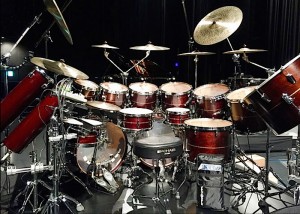 I’ve searched high and low for other instruments he might have for very special occasions but, aside from an ancient 1939 Leedy snare drum which has been breathed on by Paul Jameson, I’ve discovered nothing. These days he’s happy with Tama, Zildjian, ProMark and Remo who seem to look after him rather well. 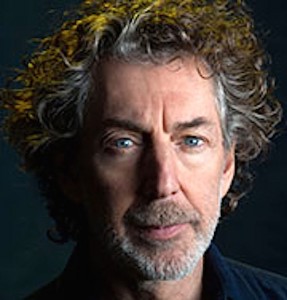 Disaster struck in December 2017 when his house and all his belongings in it were burned to the ground in the Thomas fire which swept through the community where he lived in Ventura County, Southern California.

It appears Simon lost everything, including material regarding his father and just about everything that he would have accumulated from his own illustrious career, instruments, memorabilia, recordings and so on. He also lost his studio. Fortunately Simon himself wasn’t lost in the fire.

More recently he made an announcement that he would no longer be playing rock in order to pursue playing jazz and jazz-fusion.