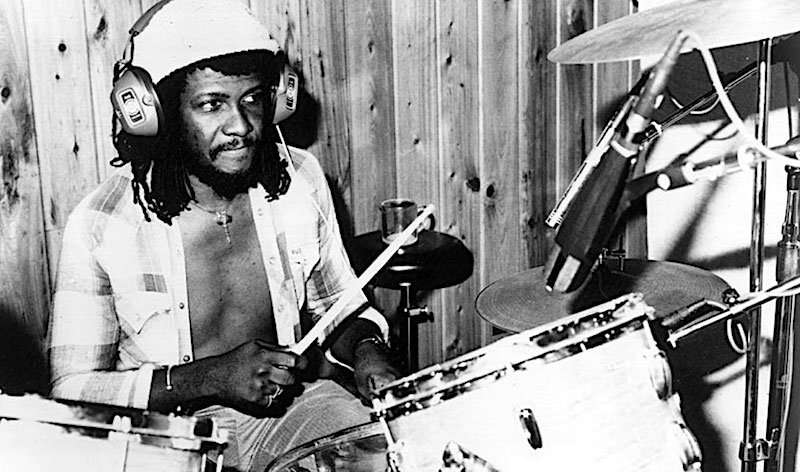 Lowell ‘Sly’ Fillmore Dunbar was born on 10 May 1952 in Kingston, Jamaica and unless I’m missing something remains the world’s quintessential reggae drummer, His name is invariably linked with bass player Robbie Shakespeare, best known as one half of the prolific Jamaican rhythm section and reggae production duo Sly and Robbie – aka ‘The Riddim Twins’. I racked my brains to think of another drum and bass combination in any musical genre which has stood the test of time like Sly and Robbie. I didn’t really come up with any names other than the blindingly obvious ones who unfortunately aren’t playing together any more for various reasons: Ringo/McCartney, Bonham/Jones, Copeland/Sting, Baker/Bruce and so on.

Like the greater majority of the subjects for Groovers and Shakers from a very young age Sly had an affinity for the drums building his own set out of boxes and empty food cans. At age 15, he began playing real drums and dropped out of school and took a day job, before he decided to concentrate on music full-time in a band called The Yardbrooms. His first recording was with Dave and Ansell Collins on their album released at pretty much the same time Double Barrel. Eventually Sly actually joined a band with Ansell Collins called ’Skin, Flesh and Bones’.

I came upon an interview Sly had given talking about his influences and explaining how his mentor was the drummer for The Skatalites – a guy called Lloyd Knibb who was by no manner of means simply a reggae, or ska drummer. He could evidently play in any style including Glen Miller! Sly went on to say he used to listen a lot to Booker T. & the M.G.’s drummer who there are no prizes for knowing was Al Jackson Jr. He also said he paid close attention to the rhythms the drummers of Philadelphia were playing. Of course there were other drummers in Jamaica, like Santa and Carly from The Wailers as well as Winston Bennett, Paul Douglas and Mikey Boo. Sly respected all these drummers and it seems he learned a lot from them. As he said:

“I listened and created my own style. They played some things I copied; other things I recreated.”

In 1972, a sea change occurred when Sly Dunbar met and became firm friends with Robbie Shakespeare, who was then playing bass for the Hippy Boys. Shakespeare recommended Dunbar to producer and recording engineer Bunny Lee as a possible session drummer for the Aggrovators. This persuaded Dunbar and Shakespeare to continue performing together – the rest is history.

The two discovered an instant empathy, and around 1974 when I first met Sly I was writing the drum pieces for Rick Desmond’s ground-breaking International Musician Magazine. They formed their own Taxi Records label and began marketing themselves as a production and rhythm section team. Their fame grew quickly, as they were asked to perform with reggae giants like Bob Marley, Jimmy Cliff, and Burning Spear; however, the duo’s real break came in 1976, when Peter Tosh featured their rhythm work on Legalize It and made them part of his touring band two years later. The increased exposure spelled success for Dunbar and Shakespeare’s careers as producers, musicians, and label heads. Taxi released a number of important recordings, with Sly & Robbie as backing musicians.

According to The Independent however, Sly and Robbie’s breakthrough album was The Mighty Diamonds‘ 1976 release Right Time, which helped to establish them as the “masters of groove and propulsion”. The drum beat on the title song was particularly tricky; in 2001 Dunbar recalled, “When that tune first come out, because of that double tap on the rim nobody believe it was me on the drums, they thought it was some sort of sound effect we was using. Then when it go to number 1 and stay there, everybody started trying for that style and it soon become establish.”

{This was arguably the birth of that reggae rhythm and suffice it to say if it’s going to be a “one drop” you simply don’t play beat one. If the X-stick backbeat is on 2 and 4 or on 3 (half-time), it doesn’t matter because the concept is still don’t play beat 1, ie you ‘drop’ it. Whether you’re thinking 4/4 or 2/2.} 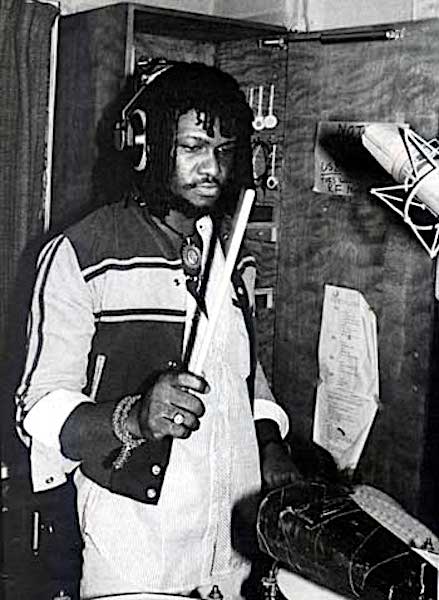 In 1976, they experimented with a harder beat which was called called “Rockers”, which evidently replaced the then-prevalent “One Drop” style, then introduced the “Rub A Dub” sound in the early 1980s.

There’s a significant quote about Sly from 1979 when Brian Eno (once of Roxy Music) stated:

“When you buy a reggae record, there’s a 90 percent chance the drummer is Sly Dunbar. You get the impression that Sly Dunbar is chained to a studio seat somewhere in Jamaica, but in fact what happens is that his drum tracks are so interesting, they get used again and again.”

After Dunbar and Shakespeare decided to become partners, they formed their own Record label (Taxi) in 1980 which released records from many international artists who became extremely successful : Black Uhuru, Chaka Demus and Pliers, Beenie Man and Red Dragon.

Eventually they both worked with Peter Tosh and his band until 1981. During this time they recorded five albums.

The first official Sly & Robbie release came in 1981 with Sly and Robbie Present Taxi, which was followed the next year by Dunbar’s final solo album to date, Sly-Go-Ville. Several more albums came out, some released only in Jamaica, followed; notably Rhythm Killers (1987) and Dubs for Tubs: A Tribute to King Tubby (1990). These showed the pair’s 1980s shift from traditional reggae into dub. Lots of session work for others went on during that time as well, with Black Uhuru and pop and rock artists like Sting, Carlos Santana, Grace Jones, Madonna, Mick Jagger, Bob Dylan, and Herbie Hancock.

But as we know, it didn’t stop there because Sly and Robbie entered the mainstream in a big way and played on Bob Dylan‘s 1983 album Infidels and also Empire Burlesque (using recordings from the Infidelssessions). Other sessions include their appearance on three Grace Jones albums, and work with Herbie Hancock, Joe Cocker, Yoko Ono, Madonna, Serge Gainsbourg and perhaps more famously the Rolling Stones.

As I said, Dunbar played for the Aggrovators and Bunny Lee; the Revolutionaries for Joseph Hoo Kim and the Upsetters for Lee Perry. Eventually he went on to record for Barry O’Hare in the 1990s.

In the early 1990s, Sly and Robbie introduced a different sound with the hits by Chaka Demus & Pliers. DJ vocals were matched with Pliers‘ sweet, melodic, soul-influenced singing; This formula has since been used with success by Shaggy, Shabba Ranks, Maxi Priest and others.

The Riddim Twins continued to innovate during the late 1990s and early 2000s, fusing dancehall and Latin music sounds or dancehall and hip hop/R&B (their 2004 Big Up riddim). They had another successful collaboration in 1997, with Simply Red on a cover of Gregory Isaacs‘ “Night Nurse”,

In 2008, Sly Dunbar collaborated with a Jamaican percussionist named Larry Mc Donald to do his own thing, on his debut album ‘Drumquestra’.

In 2011 Sly Dunbar appeared in the documentary “Reggae Got Soul: The Story of Toots and the Maytals” which was shown on the BBC The film was billed as “The untold story of one of the most influential artists ever to come out of Jamaica”.

Dunbar continued to work with Shakespeare into the ’90s, the two moving their focus once again in an effort to bring reggae back to its original state of popularity; they have also worked with American rap artists on such albums as their 1990’s Silent Assassin. 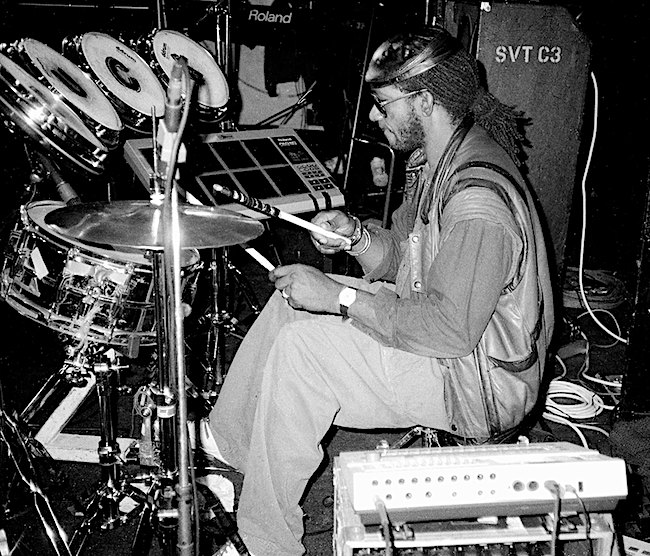 Sly and Robbie had a big hand in popularising the move towards computer-assisted music and programmingat Chris Blackwell’s suggestion who made them the core of the Compass Point All Stars. This was the Nassau recording band based at Compass Point Studios that was to produce classic records for Grace Jones, Joe Cocker and Gwen Guthrie among a great many others.

I looked around the internet to see what drums Sly could be associated with other than Dave Simmons’ electronic versions which Chris Blackwell wanted him to play and which I saw him with at trade shows. I came to the conclusion that there are lots but once again, as Lance Armstrong declared (while otherwise shooting himself in the foot) when he assured us in his book that it was “not about the bike!” That’s the truth and I reckon Sly could sound good on the pots, boxes and pans he started with as a kid.

The success story goes on and they received their 11th Grammy Award nomination in 2014 for the album The Reggae Power. In October 2015, the duo received the Gold Musgrave Medal from the Institute of Jamaica in recognition of their contribution to music

Besides being known as the Riddim twins I’ve seen an apt reference to them as the Jamaican Drum Machine.There is some conjecture that Sly didn’t actually invent ‘one drop’ and Carlton Barrett from the Wailers did.

If Lowell “Sly” Fillmore Dunbar didn’t exactly invent all the drumming for Reggae music he certainly had a pretty big hand in popularising it.